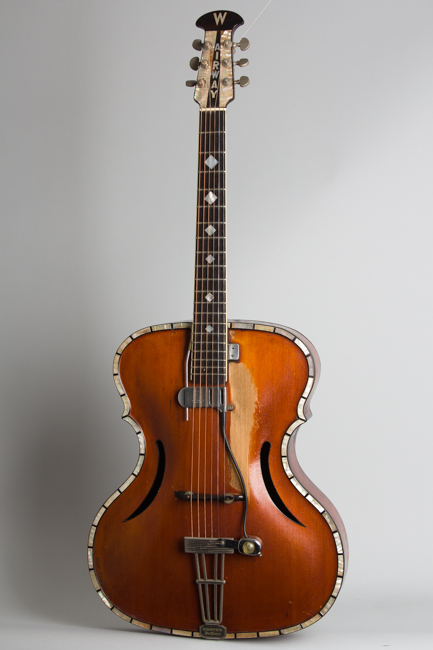 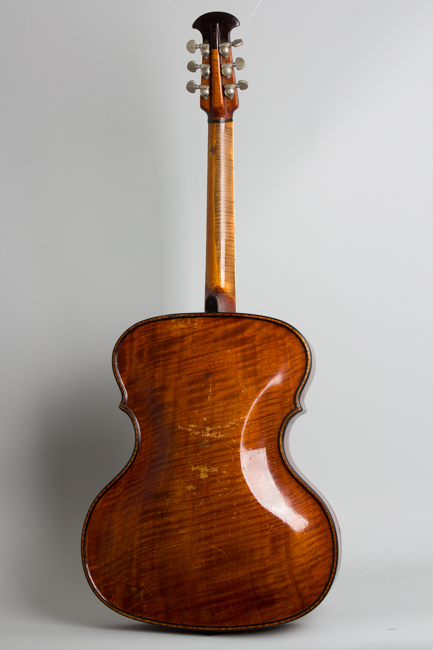 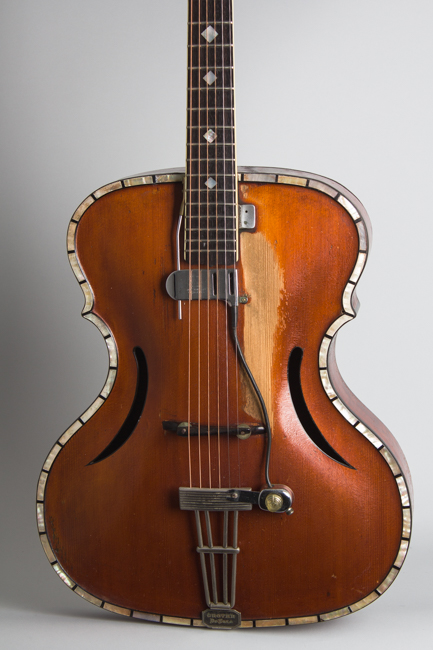 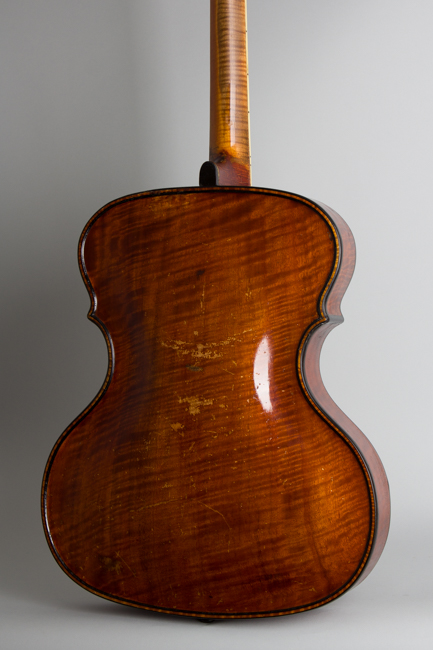 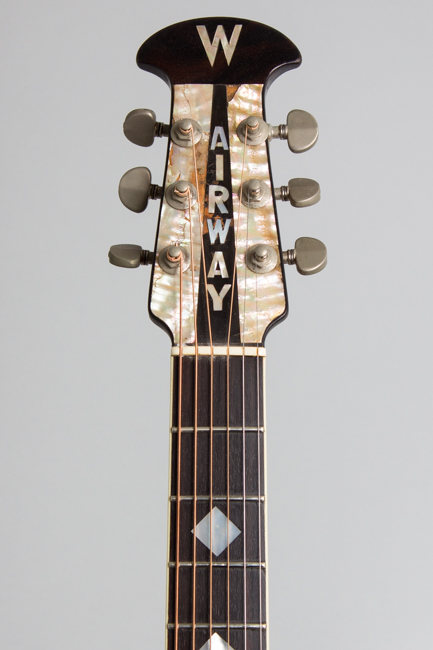 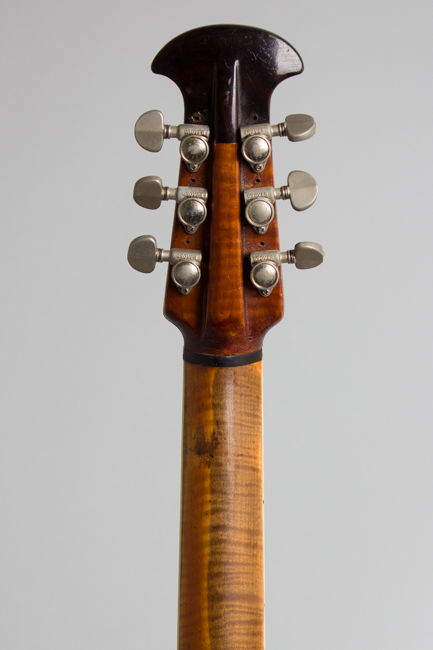 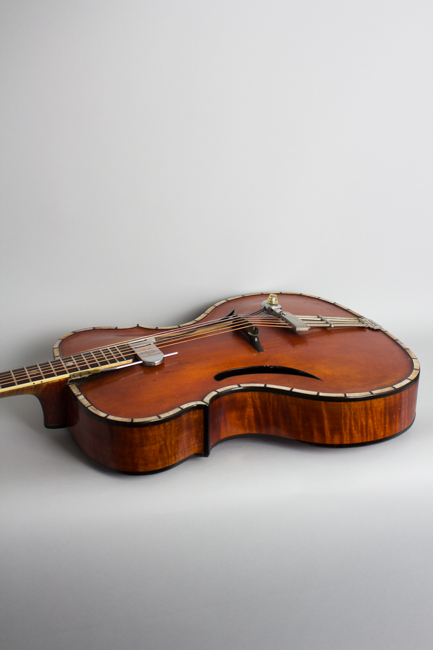 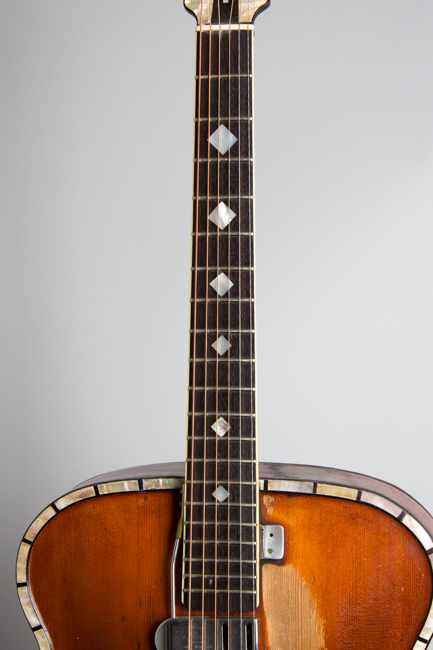 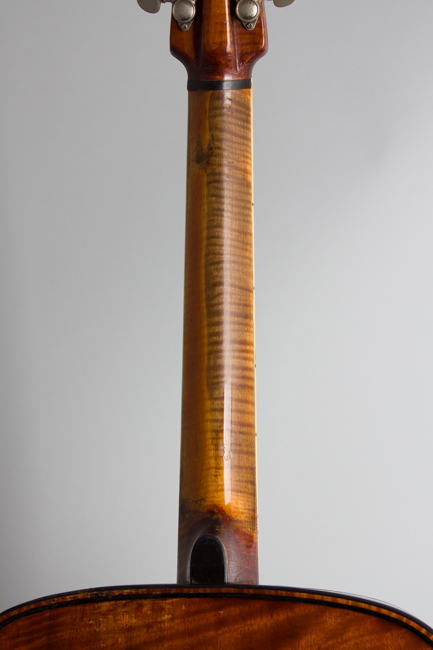 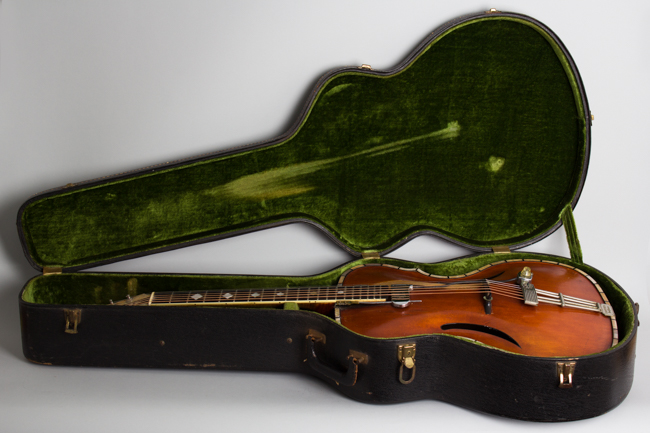 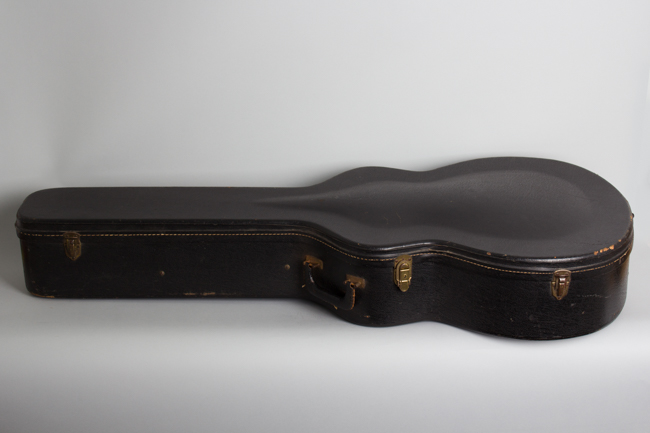 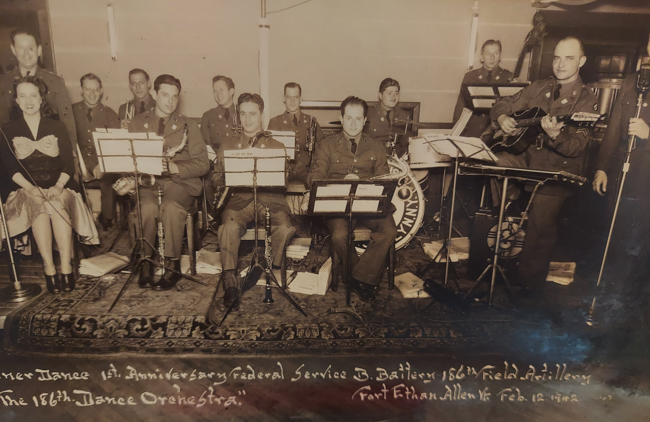 This Wilkanowski Airway is one of the most distinctive and unusual American guitars ever created, and a true (if eccentric) classic of the 1930's arch-top era. Willi Wilkanowski was a well-known Brooklyn violin maker who, beginning around 1937, crafted a very limited number of elaborate carved top guitars. No catalog references to these have surfaced; they were likely only sold locally out of Wilkanowski's violin shop at 68 Nassau Avenue, at the nexus of Williamsburg and Greenpoint. Only a relative handful of Wilkanowski guitars are known to exist, and each is an individual creation.

Willi Wilkanowski was born in Poland in 1886, coming to the United States in the early 20th century. In the 1920s he built violins sold by the Ditson Company of Boston and New York, and later for the Fred Gretsch Company in Brooklyn. The 1940 Gretsch full-line Catalog offers Wilkanowski "Artist Model" violins priced from $50-$150 described as "his own personal work...no other hand touches them". At some point in the 1930s Wilkanowski became interested in guitars, approaching the design in unorthodox ways. Wilkanowski guitars seem to date between 1937 and 1941 and all his guitar forms and design elements are unique. At least one of his sons was possibly involved in their design or construction; some are labeled "Wilkanowski and Son" but no violins carry that brand.

A 1942 bio of Wilkanowski states 30 guitars had been made, selling for $400 each; no evidence suggests any were built after that. Whether Wilkanowski examined guitars from Gibson or fellow New York builders Epiphone and D'Angelico is unknown; but the price indicates he felt his instruments were equal to an Emperor, Super 400, or D'Angelico New Yorker! It is also unknown as to whether he had any input into or was influenced by the Gretsch Synchromatic line, designed and launched around 1939. He had extensive business dealings with Gretsch at the time.

Wilkanowski guitars are built to a basic pattern with variations typical of handmade instruments; whether from customer input or the builder's whim. These include headstock style, body width and ornamentation, fingerboard inlay, soundhole shape and tuners and hardware. This elaborately pearl-decorated guitar has a small label reading "Wilkanowski & Son Guitar Makers, made in USA" with "W-3" hand written in ink. It is also hand signed and dated along the back "W.Wilkanowski 1938", with several small hot stamp logos under the top. The pearl trim may have been the defining "W-3" characteristic.

The body is in the standard Wilkanowski pattern, with cello-like points where the upper bout slopes towards the waist. The large-block pearl around the edge is only seen on a few Airways; the raised rim off a "German curve" edge is typical. The dark-bound "cat's-eye" soundholes are similar to contemporary Gretsch Synchromatic style, but curve inward rather than outward. The slightly diagonal grain figure on the back has an almost 3-D flame quality, bound in black-bordered flamed wood trim.

Internally the construction is extremely unconventional, consisting of a cross-grain piece of spruce with two short but deep longitudinal braces angled off the center of the top. The Grover De Luxe tailpiece is a typical period fitting, the hand-carved ebony bridge with nickel plated adjustment wheels is Wilkanowski's work. The pickguard appears to have been removed early on judging by the amount of top wear. A 1950s DeArmond FH-C pickup rig is attached to the top.

The flame maple neck has a medium "V" profile with huge pearl diamonds inlaid into the bound ebony fingerboard. This wood is sheathed over an aluminum core, a hidden but amazingly modern feature Wilkanowski pioneered in the 1930s. The mounting bracket for the missing pickguard is integral with this, and still projects off the treble side of the fingerboard.

The "Airway" logo under a stylized "W" on the tapering, crested headstock appears on some examples; others have elaborate cello-like scrolls. The headstock face has abalone panels surrounding the tuners. These were originally Grover "Sta-Tite" type, but were changed to patent pending Grover Rotomatics likely in the 1960s.

We are pleased to offer this amazingly fancy, exceptionally rare guitar for sale from its original home of Brooklyn, NY. A visually fabulous instrument, it remains a spectacular example of the most inventive 20th century guitar craft. Not just a looker, it is easily the best sounding Wilkanowski we have heard having seen decades of use as the gigging instrument of a local NY area player. The sound of this guitar is powerfully well -rounded and quite loud, and it projects extremely well. There is an exceptional amount of history in this guitar, both in the building and the playing. The instrument was photographed with the original owner playing it in military service with the 186th Field Artillery Band in early 1942; it has come a long way since then!

This is a VERY heavily played guitar, an active gigging instrument for decades. That is sort of amazing in itself, considering its rarity. The finish is thin varnish more typical of violins and cellos and shows considerable wear everywhere, especially to the top. It remains all original without overspray but shows heavy checking and crazing with nicks, scuffs and scratches throughout. A large area of pickwear on the top where the missing pickguard once was has gone through the finish into the spruce below. The back has some large scrapes and dings, and there is a large spot worn through on the side below the heel from the player's fretting hand.

The top trim shows chips and small areas of loss to both the curved strips of mother of pearl and black celluloid spacers and binding. A section of the back binding on the bass side has been carefully replaced. The neck finish has been worn down to the wood over much of its length on the bass side. The fingerboard was leveled and refretted with larger wire some time ago. The headstock face has some loss to the wood veneer and the abalone and mother of pearl inlay. Screw holes from the original openback Grover tuners are still visible on the back of the headstock.

The original "Grover DeLuxe" tailpiece shows considerable oxidation on the base. An added screw mounts the DeArmond volume box to the tailpiece crossbar. The pickup is mounted to the top by a typical bracket off the bass side fingerboard extension and by a screw into the top on the treble side; it could be removed if desired but the holes would remain. We have elected to leave the guitar as it was used and enjoyed for decades; the DeArmond still sounds excellent as they usually do!

This is a very fine playing instrument with a rich and powerful sound. The original bridge has plenty of room to adjust up or down. Somebody used and cared for this guitar for decades; the extensive wear is the result of endless hours of play not abuse or poor repair. The case is a beautiful 1950's Lifton, filled with musical miscellanea ranging from 1920's magazine pages to handwritten set lists and chord sheets dating into the late 60s, at least. This well-used but great playing guitar is a truly unique find, rich in 20th century guitar historic significance but someone's personal history as well. Overall Very Good + Condition.
×