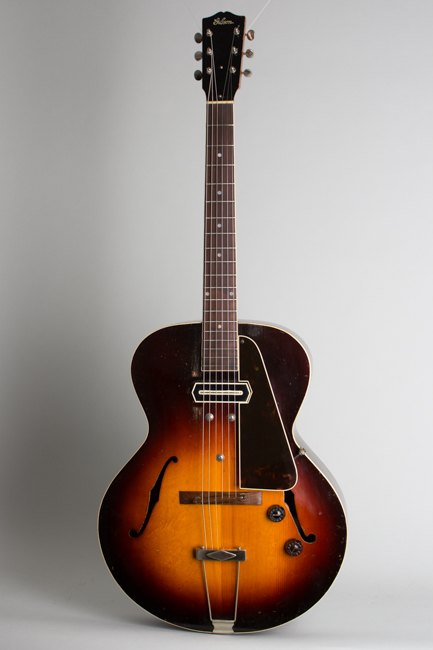 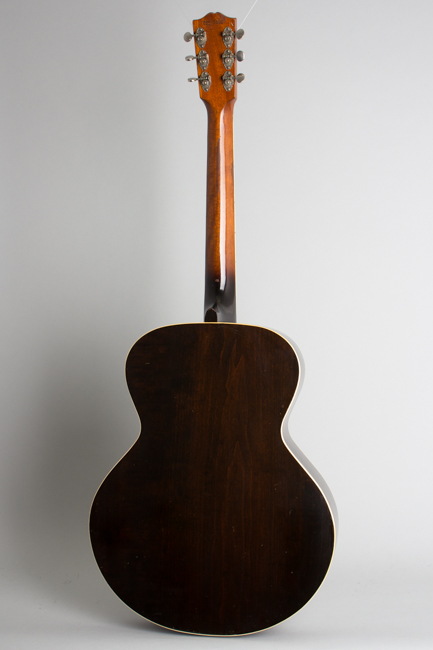 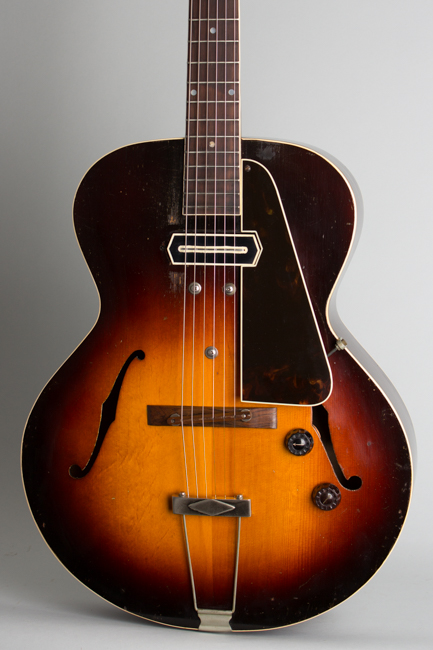 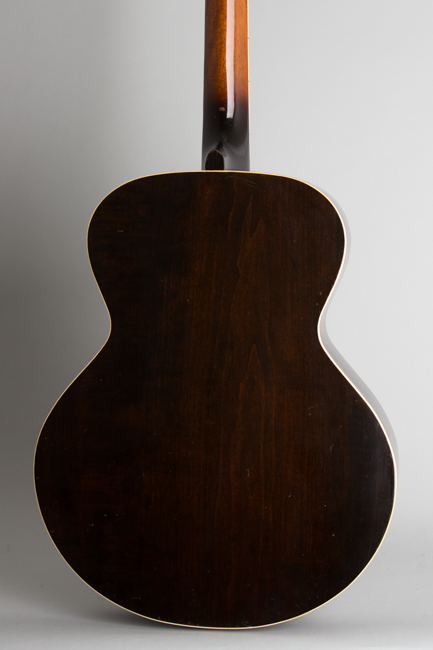 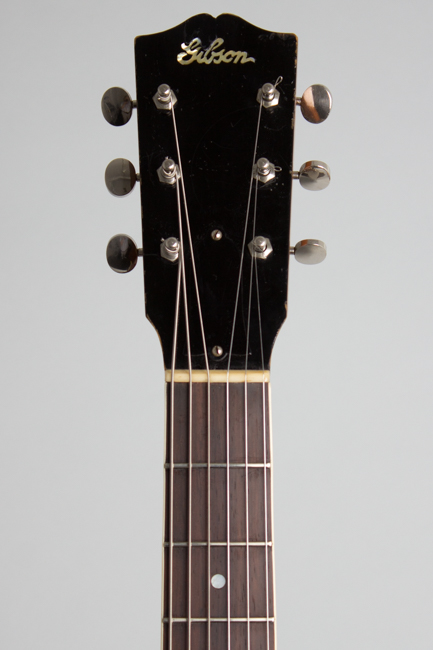 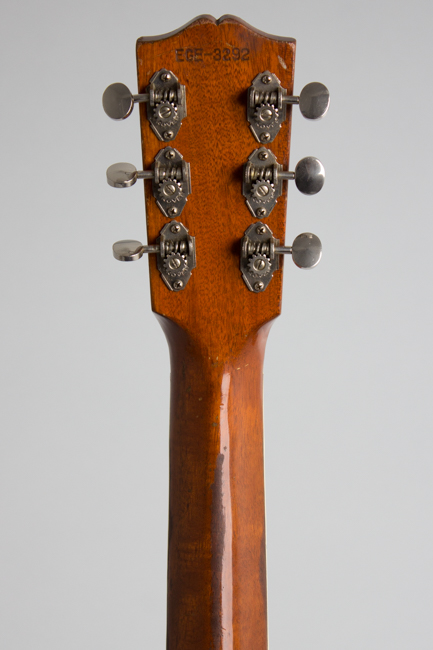 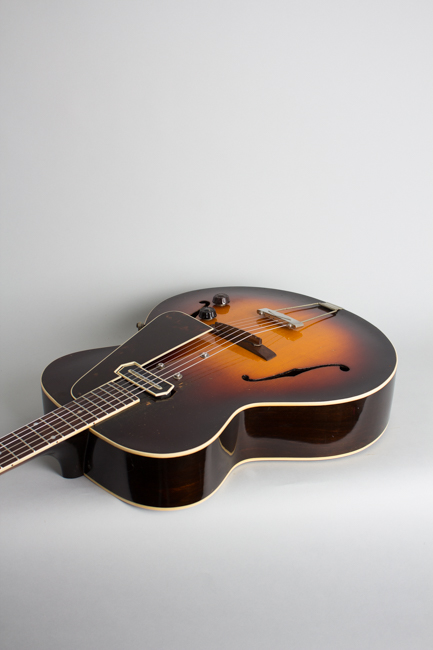 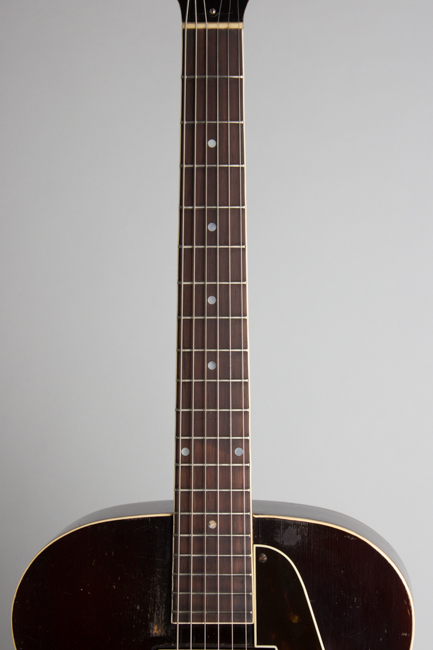 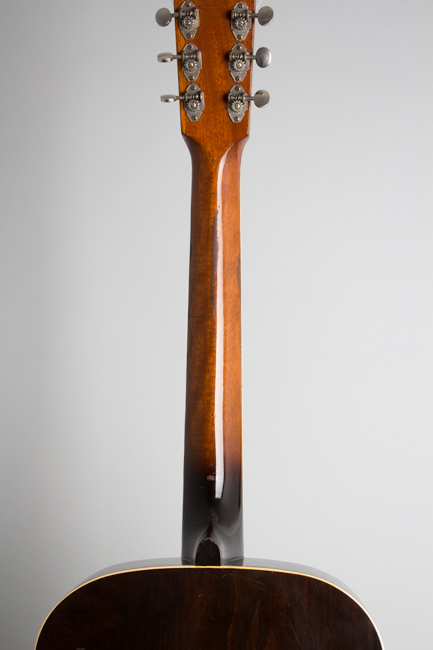 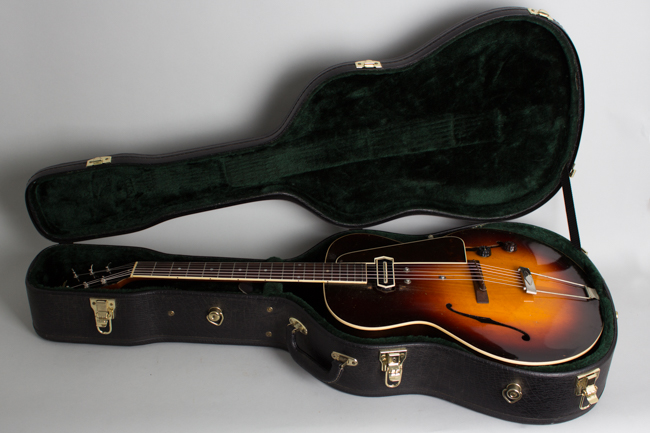 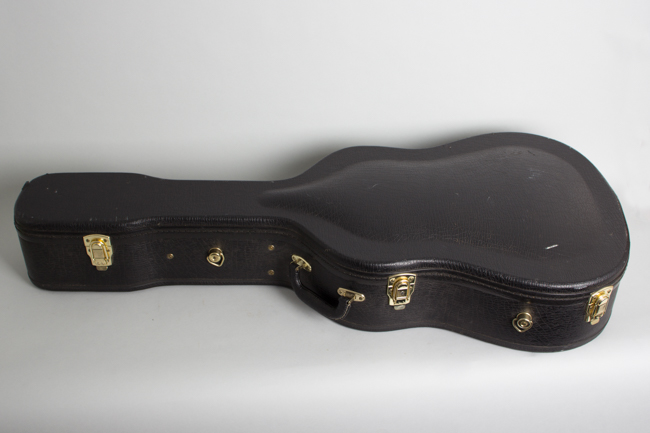 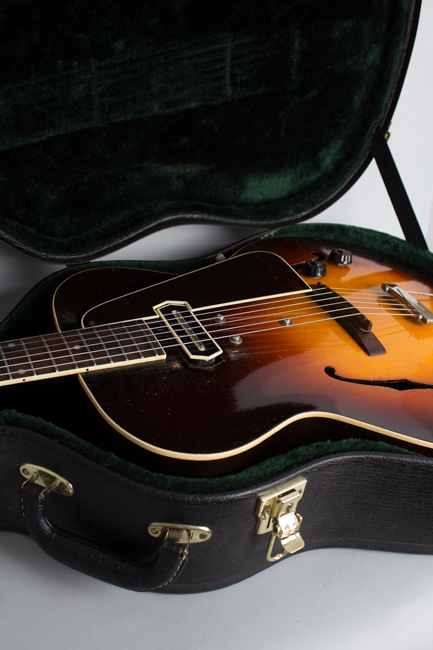 The early Gibson ES-150 is quite simply one of the most important electric guitars of all time, and beyond that remains an exceptionally fine player's instrument 80+ years on. Most associated with Charlie Christian, this model was the first truly commercially successful electric Spanish guitar and the progenitor of the entire Gibson Spanish electric line. While many of the early electric guitars from the 1930s have a rather mongrel look, the 150 has a beautifully understated elegance that undoubtedly helped it gain acceptance on the formal bandstands of the time.

This particular guitar is a 1939 model still with the first "Spanish" version of the famous bar magnet pickup featuring a single-bound top edge and a straight un-notched blade under the strings. The tuners are fairly fancy open-back Grovers of a style specific to 1938-9. The dark sunburst top is single-bound, with an overall dark mahogany finish to the back and sides. A pearl Gibson logo adorns the headstock. This guitar has had some restoration work in the past but remains a very attractive and great-sounding, fine-playing example of this rare and much sought-after instrument.

This guitar shows some old repair and restoration work but remains in excellent playing and very nice cosmetic condition. There is less finish wear than many examples of this model; the most notable is some spots of lacquer worn on the treble side of the top near the fingerboard. This area of the top shows a barely noticeable repair with two short sealed spruce grain cracks, one running from the top of the pickup to the treble side edge by the neck block and one from the pickup hole to the end of the fingerboard extension. All have been closed effectively, touched up and are mostly hidden underneath the pickguard. A strap button hole was filled and touched up on the bass side rim next to the heel.

The rest of the guitar is comparatively clean and shows just some moderate play wear. There are small dings and scratches overall, most notably around the top and pickwear on the bass side of the pickup and next to the treble side fingerboard extension. There is some playwear on the neck and capo wear at the apex of the V-shaped neck between the second and fifth frets and a small replaced chip of veneer just above the Gibson logo on the headstock. The fingerboard has been recently leveled and refretted.

All hardware appears original except the tortoise celluloid pickguard is an excellent repro. The bridge is a period rosewood piece that Gibson generally used for guitars a couple of steps down the price ladder from this model, but appears original to this guitar nonetheless. We have seen other ES-150s with this fitting, which was most commonly used on Gibson-made Recording Kings. Gibson's assemblers appear to have freely used whatever was convenient for the instrument they were setting up at the time!

The all-important Charlie Christian style pickup and attendant wiring remain original to 1939 including the 2-color radio-style knobs (one brown, one black) with delicate arrows engraved in the tops. At some point in the past, this was replaced with a P-90 style pickup. As a result, the hole in the top was just slightly enlarged and screws were added at either end to mount the P-90. At the same time, the jack hole was moved from the end of the tailpiece to the lower bout rim on the treble side.