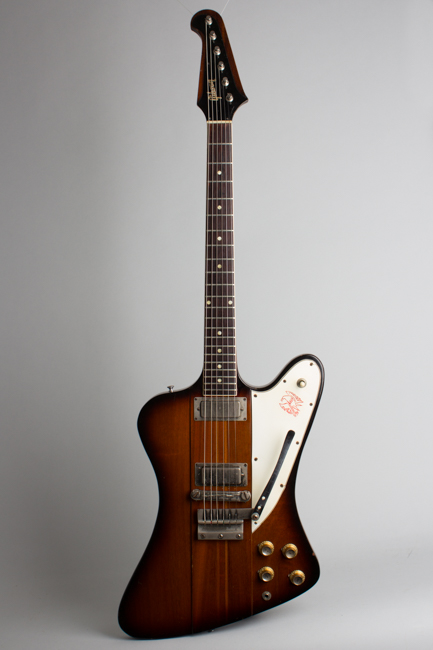 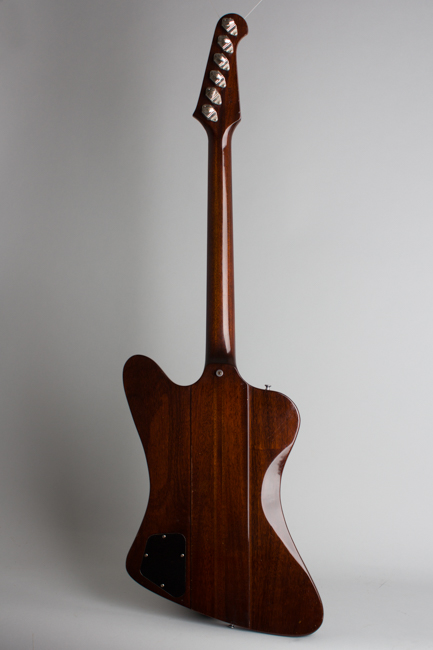 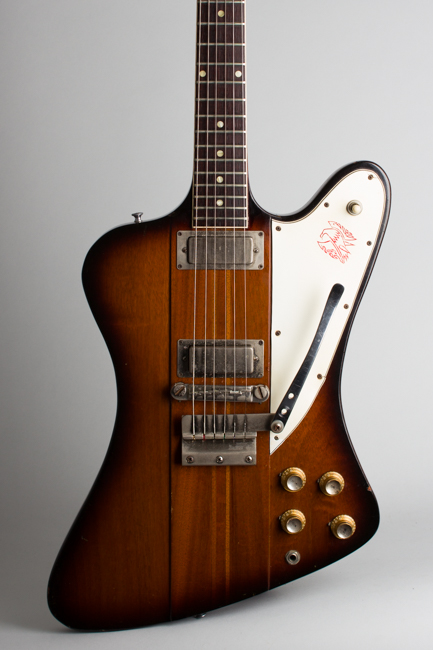 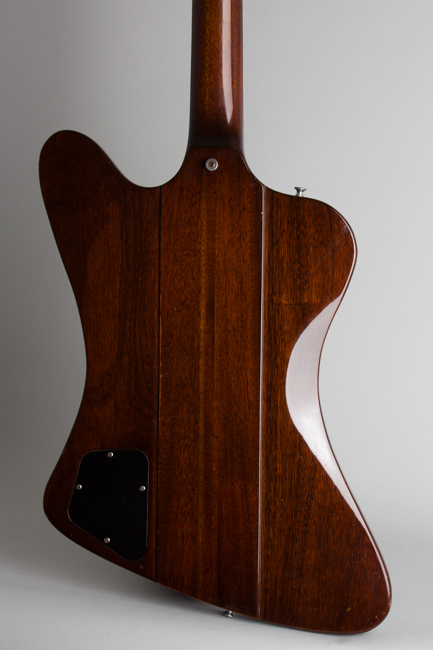 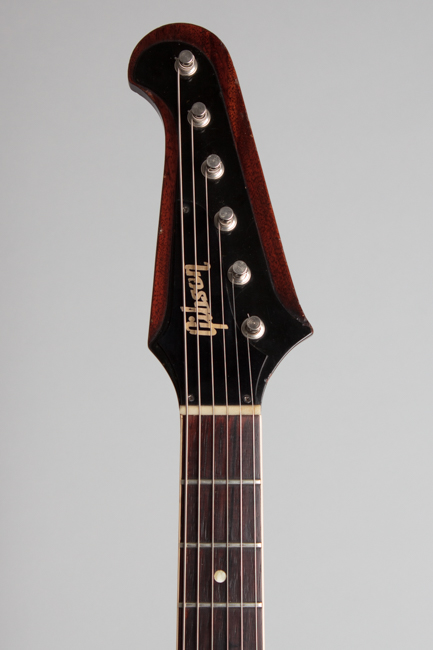 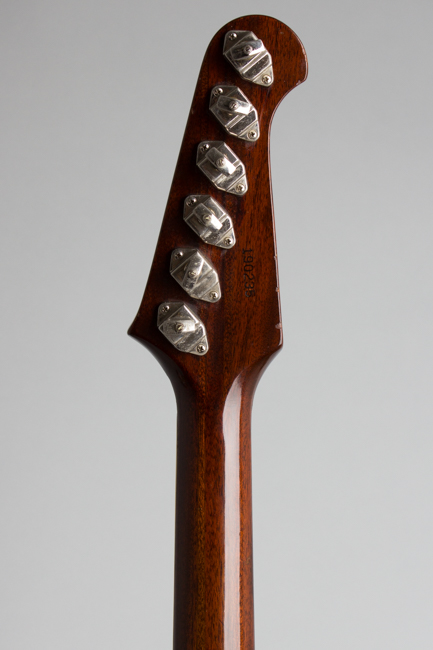 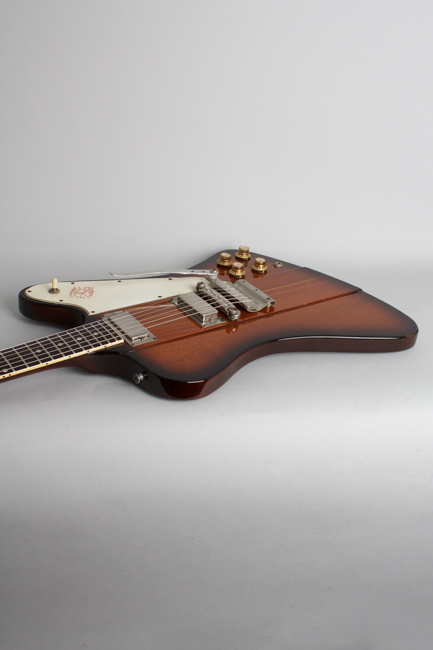 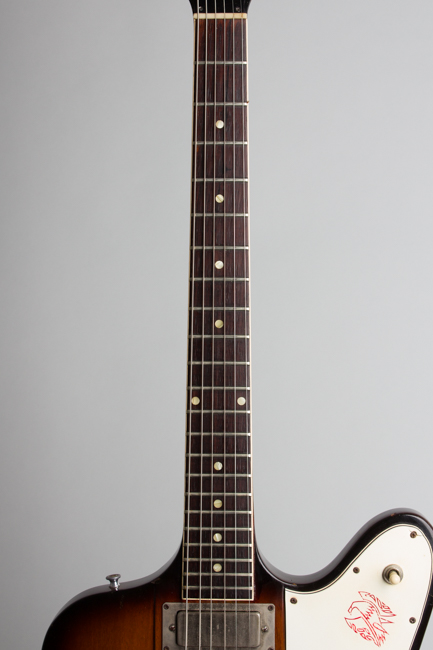 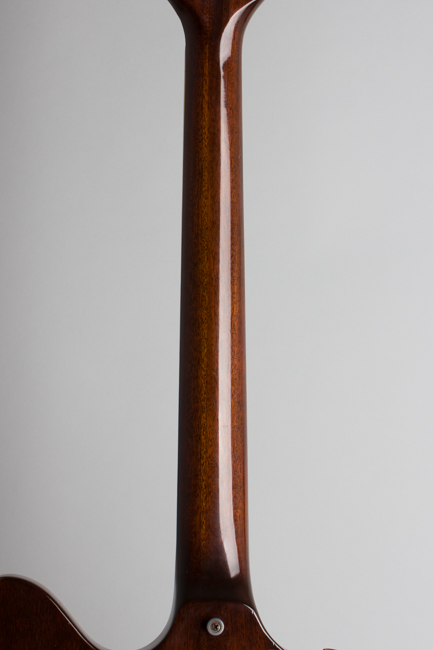 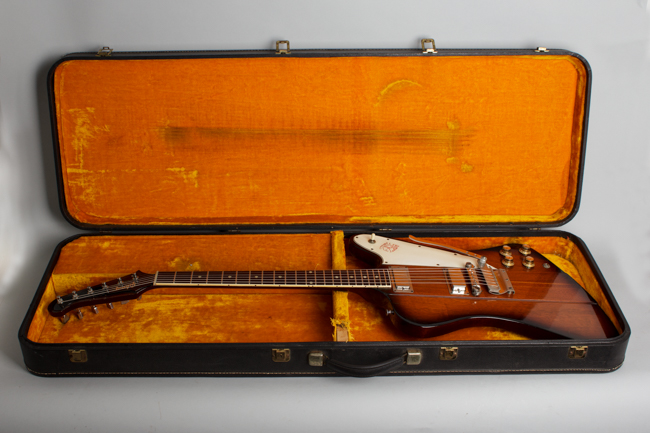 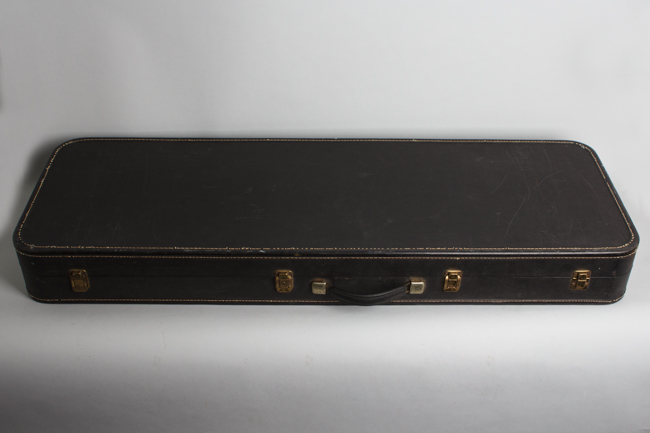 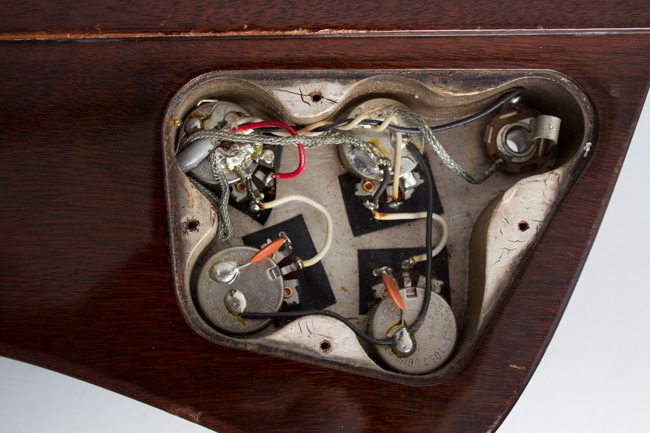 This is a superb 1964 example the most popular of the original "reverse" body Firebird model, the Firebird III. This instrument line was originally quite short-lived, introduced in late 1963 and discontinued after the mid-1965 NAMM show. The original pattern Firebird is considered a Gibson classic with its futuristic sweeping lines and innovative through-body neck construction, but the limited production time meant they barely had a chance to get established in the market before being replaced by the more conventional "non-reverse" version. The originals have been a sought-after guitar since, re-issued, revamped but never really equaled in the Gibson pantheon.

The Firebird III was the mid-line model in the original line of 'birds, but has a full set of professional features. The bound, dot inlaid fingerboard is the defining element as much of the hardware and layout is otherwise shared with the next model up, the Firebird V. Other fittings include two special mini-humbucking pickups, a short Vibrola tailpiece with the "spoon" trem arm and solid stud bridge and the unique "backwards" headstock with individual Kluson banjo tuners. All hardware is nickel plated. The pickguard covers just the lower horn and carries the selector switch; it is also decorated with a nifty Firebird emblem. The neck is bigger than the contemporary SG series with a relatively chunky feeling but comfortable round-backed profile.

Practically everything about the original Firebirds was unique; the long laminated neck-through-body centerpiece with "wings" glued to the sides, the fluid body shape with the longer lower cutaway horn and that headstock with the tuner buttons hidden from the front and the low E farthest from the nut. They hardly had a chance to establish themselves in the market before being drastically revamped. A threatened lawsuit from Fender is often cited as the reason, but it is more likely the complex design simply proved uneconomical to produce. The elaborate sculpting of the body and headstock and the eccentric neck-through construction make for a beautiful instrument, but one that was difficult for Gibson to build on a cost-effective basis.

Despite use with a number of major bands of the day (including the Rolling Stones. Four Seasons, Merseybeats and briefly the Lovin' Spoonful) these beautiful birds flew off into oblivion way too quickly. It's estimated that about 2000 of the original "Reverse" Firebird III were produced between late '63 and mid '65; many have suffered cracks in the headstock area and/or been played heavily or modified. This all-original 'bird is a splendid survivor as well as a great all-around guitar with a unique and powerful sound.

This guitar shows some light general wear but no major damage, repairs, or alterations. The finish has some very light checking and small chips and dings, mostly on the edges. Overall really this is a relatively clean guitar, with a lot of the original shine to the lacquer still intact. The most common Firebird malady is fully absent -- the neck has NEVER been cracked or broken. There is some typical pickguard shrinkage, with the screws pulling at corners, and the lower point cracked off and replaced. The engraved and painted bird emblem on the pickguard has been touched up a bit, not perfectly but it reads well from a distance anyway. The nickel plating shows typical wear but remains largely intact except on the bass side bridge stud.

The guitar is all original and complete down to the oft-missing "spoon" vibrato arm, which still has the original mounting screw and nylon bushings. The frets and fingerboard have some light wear and this is an excellent player, with the typical snarly Firebird sound. It includes the black rectangular original case, relatively clean as well but with one missing latch. One of the nicer Reverse Firebirds we have seen in a while, this is a great sounding and playing example of this super stylish if eccentric Gibson classic. Overall Excellent - Condition.
×