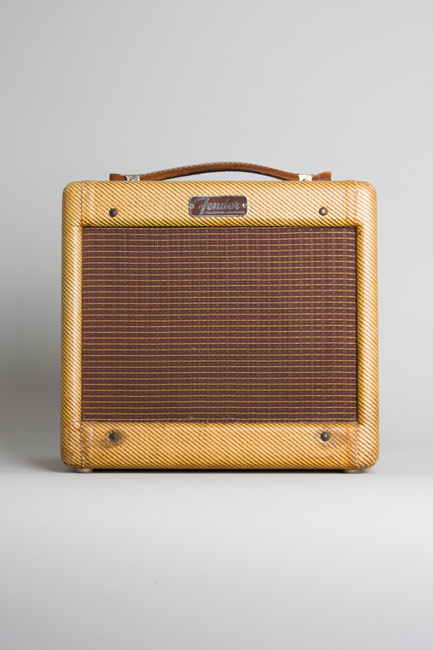 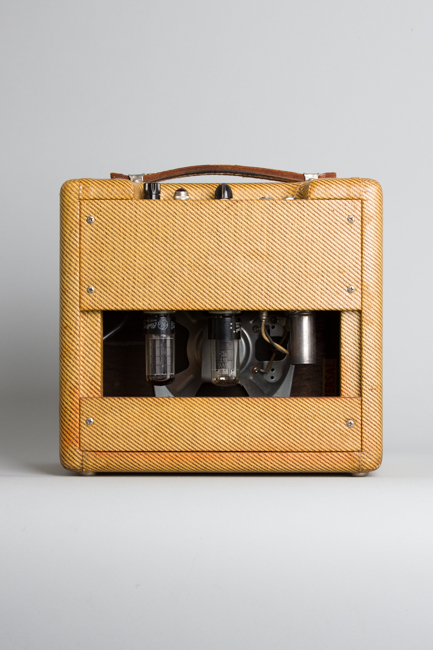 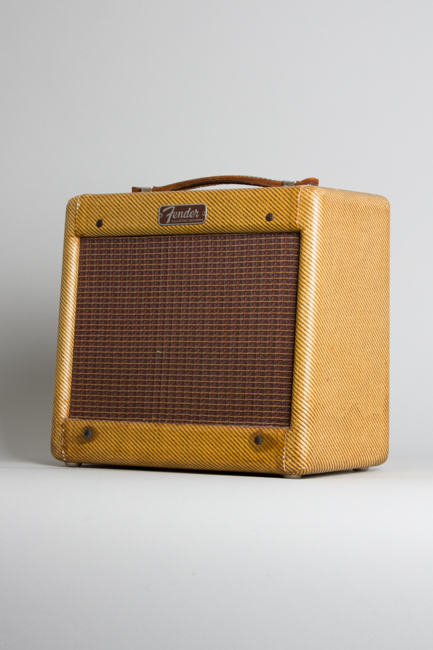 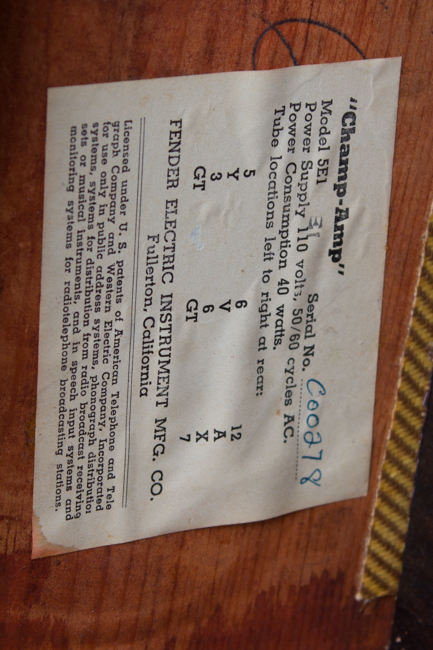 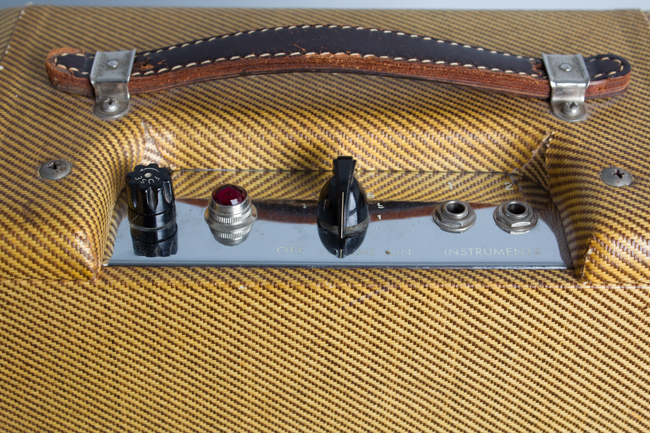 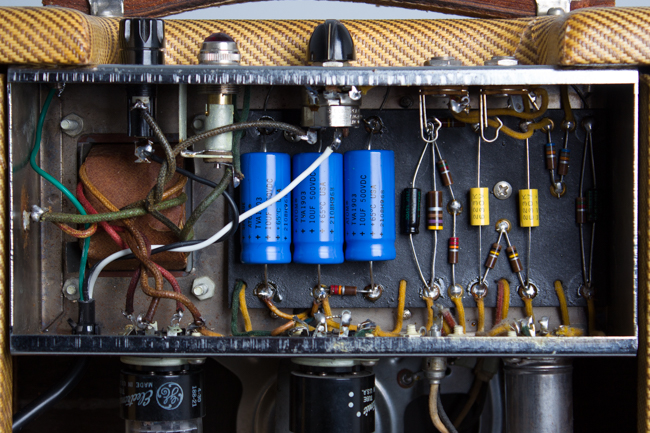 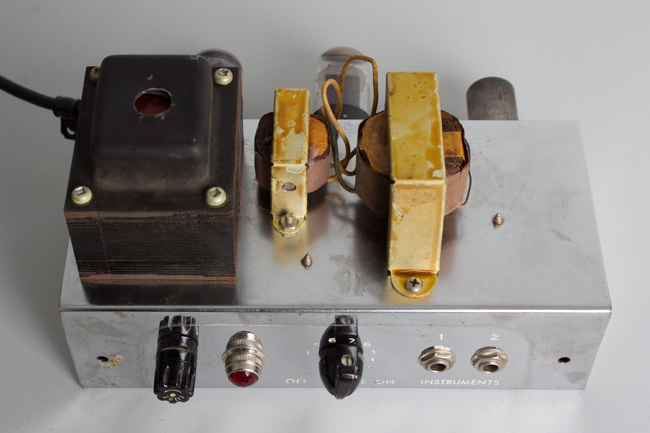 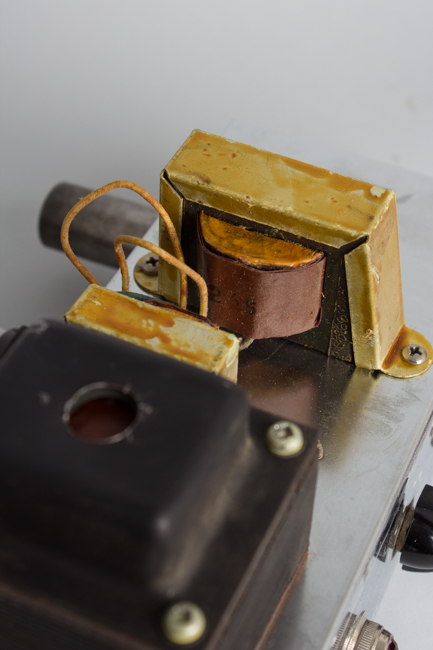 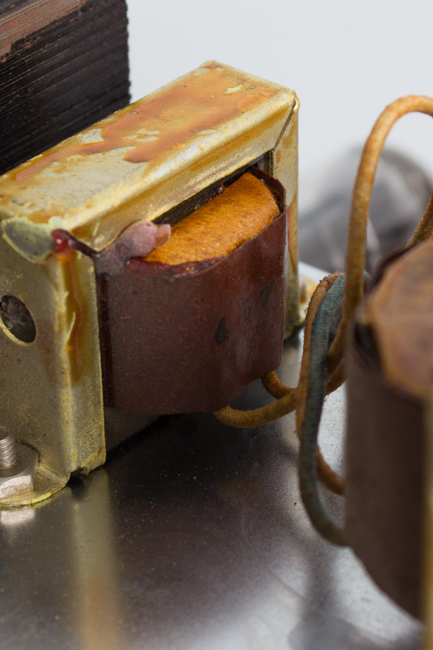 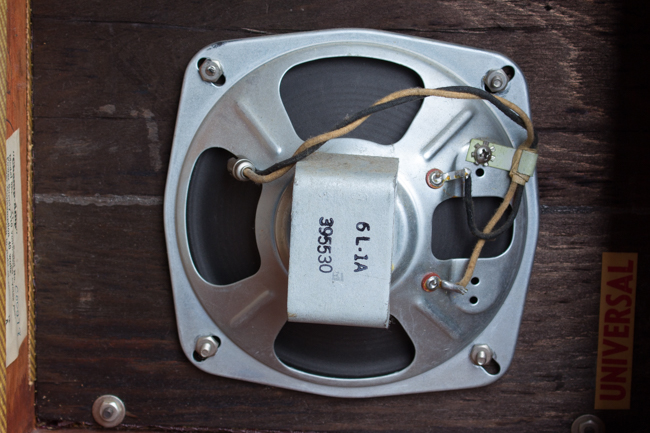 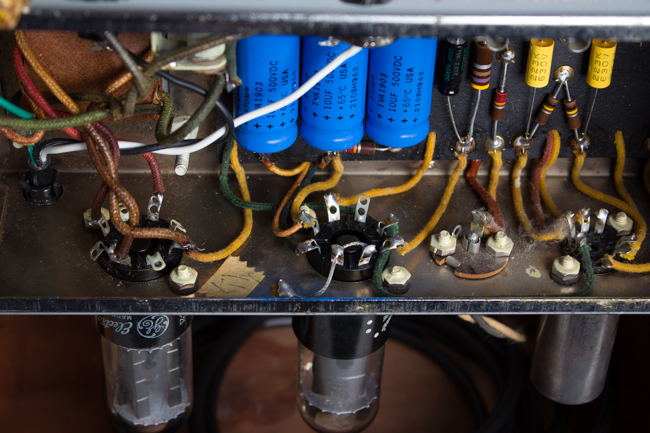 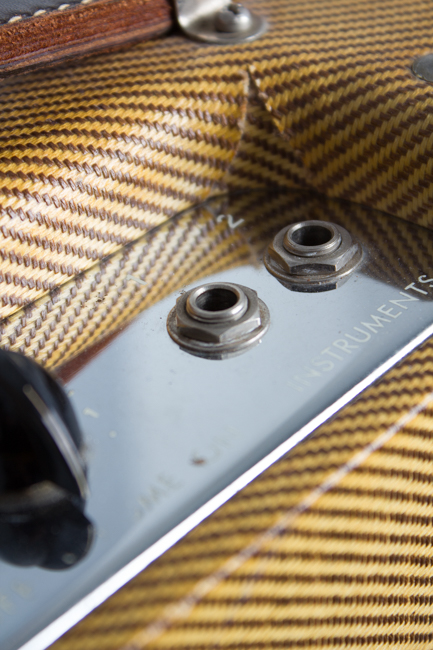 This is a very early and overall nicely preserved example of the elusive tweed Fender Champ 5E1 model, a fairly rare transitional circuit between the widepanel 5D1 and the classic narrow panel 5F1, which remained in production all the way into the 60s. The 5E1 was only made from 1955 into 1956 and spearheaded Fenders new line of "narrow panel" tweed amps. It retains the smaller cabinet and 6" speaker and, unlike the later 5F1, a choke in the power supply for filtering instead of a filter capacitor. This and a couple of minor differences in component values make the amp slightly more soft-spoken in terms of volume, but otherwise nearly identical to that hallowed classic. Just like any tweed Champ, it features a single volume knob and a single ended 6V6-driven power section, yielding about 5 watts of output power.

This amp has a tube-chart ink-stamp "EI" indicating it was assembled in September 1955, which is right around the time production started on this then-new model. The serial number is C00278, so less than 300 of this classic amp had been built before this one; thousands more would follow.

Externally, there's hardly any wear to the rather fragile tweed fabric covering except some very minor edge-wear and a couple small stains on the lower front panel. The faceplate is mirror clean, though some of the stenciled lettering is missing around the volume dial. The grille cloth is in great shape and even the original handle looks barely used!

Electrically, the only major alteration is the power transformer, which appears to have been replaced a long time ago. This part may have been borrowed from radio or hi-fi equipment in Canada, where the amp appears to have spent most of its life. The transformer works well in the circuit and the amp operates as it should. Otherwise, the amp remains nicely original.

The little 6" Permaflux speaker is dated to the 30th week of 1955 (reading 395-530). It was recently professionally reconed and sounds great. Both the choke and the output transformer are the original Triads, numbered 467 and 265, respectively. The amp sports what likely may be the original tube compliment of a GE 5Y3 rectifier and 6V6 power tube and a Tung-Sol 12AX7 preamp tube.

The amp has received routine maintenance, including standard replacement of electrolytic caps, as well as a grounded 3-prong power cord and cleaning of all sockets, pots and jacks as well as biased to spec. It was originally wired up by Lily, and has her masking tape signature still intact. Now, it may be superstition but we think this prolific Fender employee made many of the best amps of the 1950's, and we'd like to salute her long-ago labors!

Overall while not 100% original this remains a very clean and great sounding example of a rare tweed beauty. With a smooth break-up and crisp and detailed high-end, it is one of the best sounding Champs we've ever had the pleasure of featuring in our showroom! Overall Excellent Condition.
×