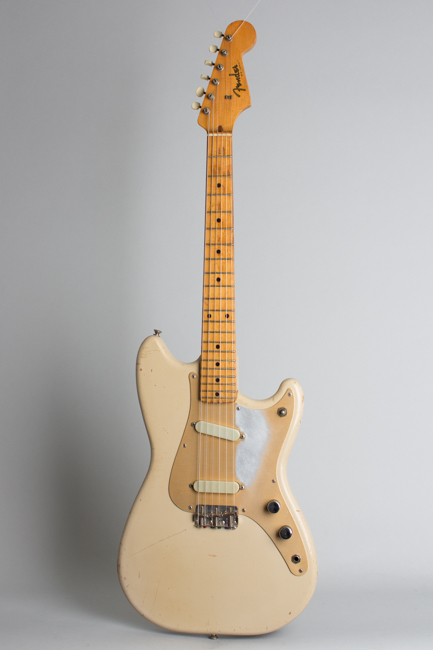 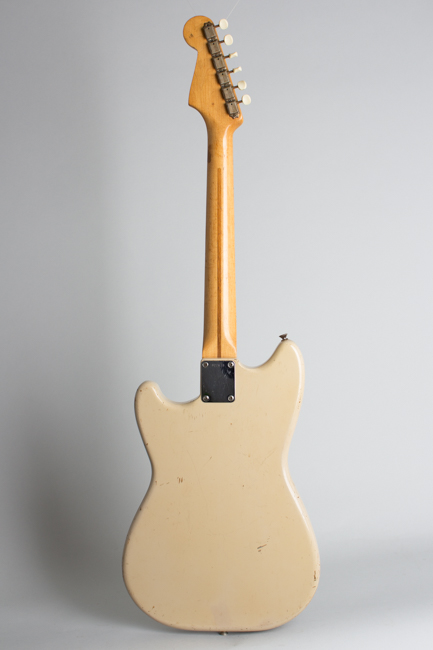 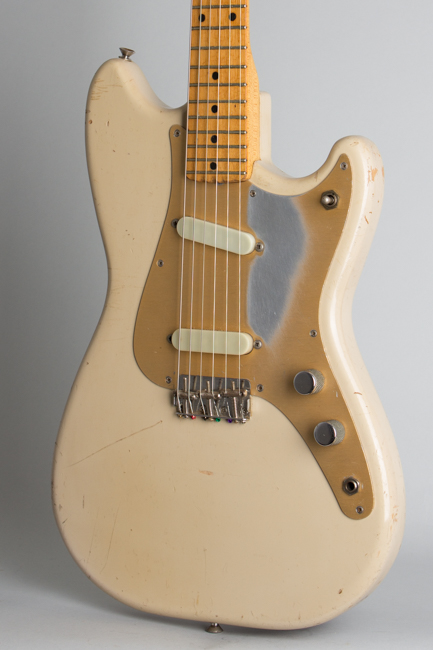 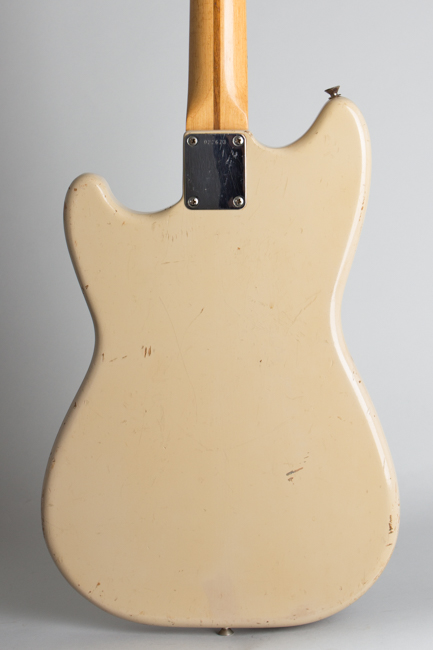 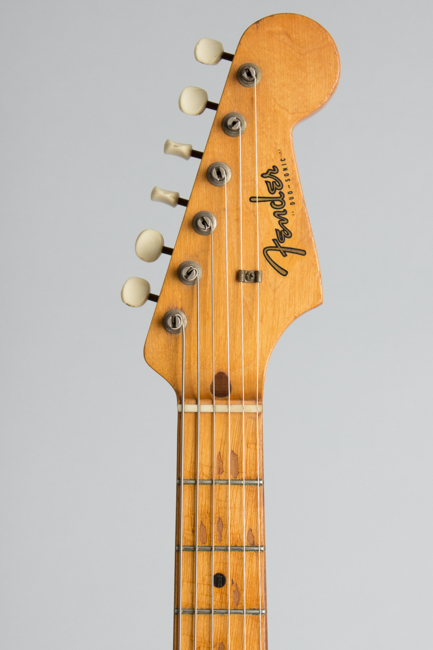 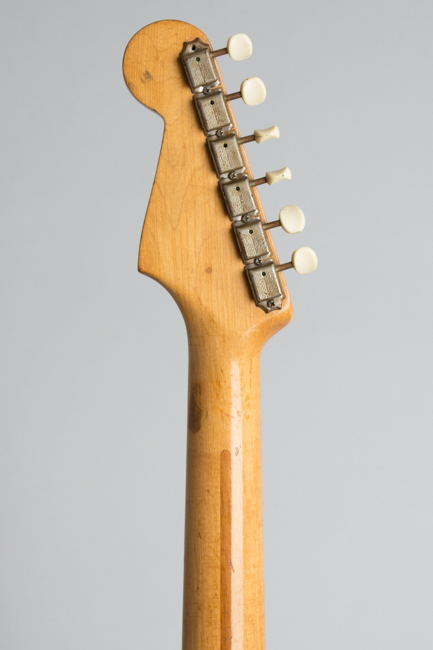 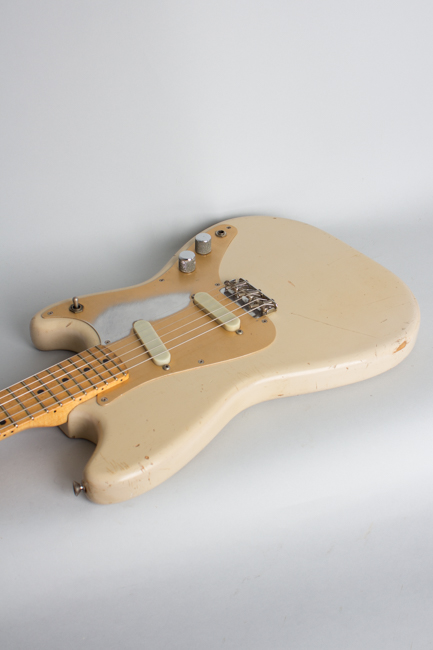 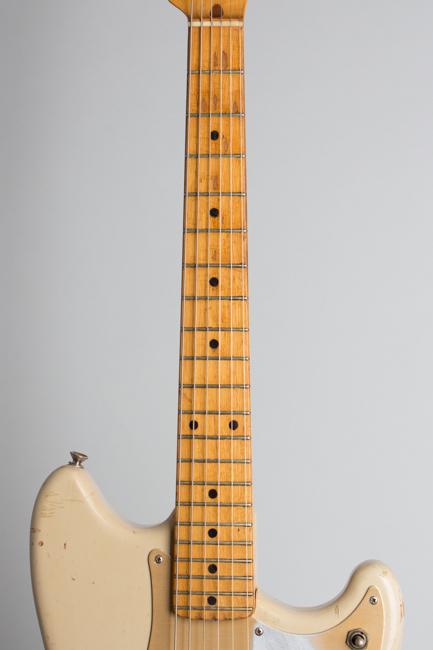 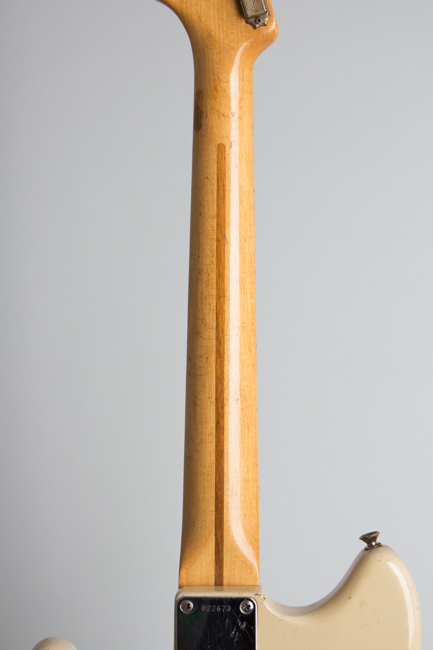 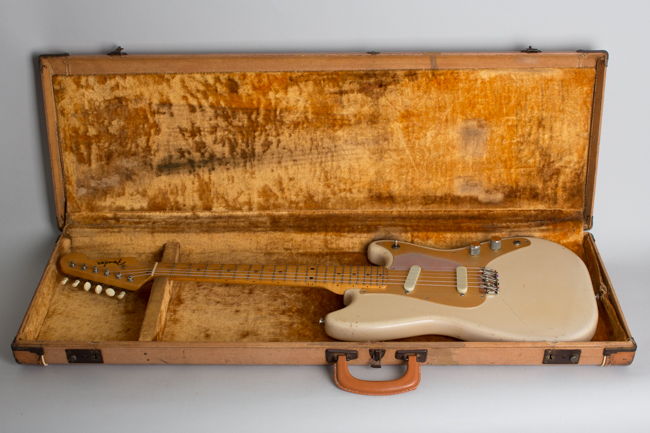 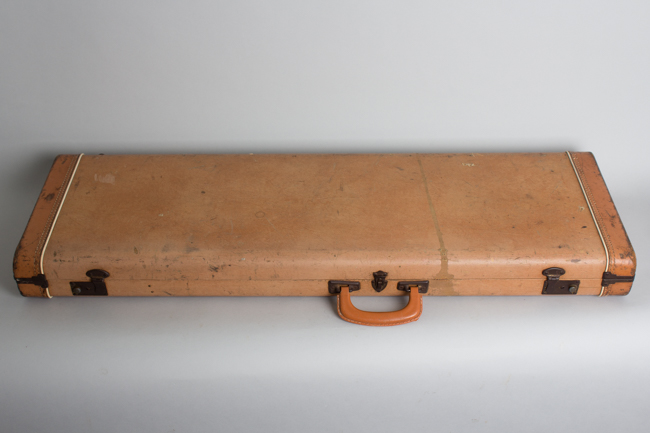 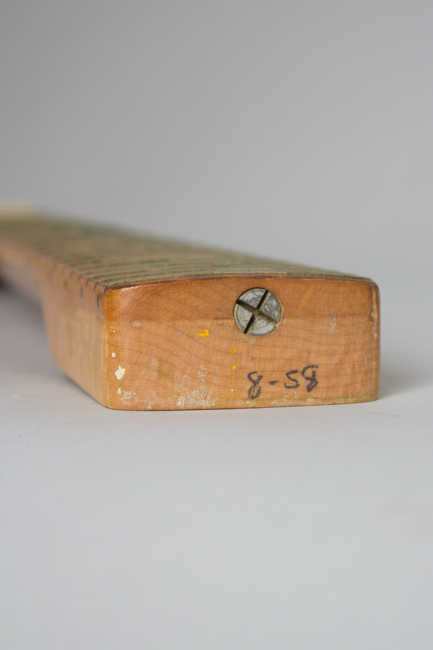 This is a somewhat worn in but still nice early example of Fender's first two pickup student guitar: the unjustly obscure Duo-Sonic. Christened with one of Fenders coolest names ever, this little package of plugged-in goodness was designed to expand the company's position the teaching studio/young student market. By the late '50s interest in the Hawaiian steel guitar was on the wane, and the kids coming in for guitar lessons wanted to rock'n'roll. A two-pickup version of the very basic Musicmaster seemed like a good idea, and The Duo-Sonic soon followed on the first student guitar's, introduced in the second half of 1956.

The Duo-sonic is built from the same components as the Musicmaster but adds a second pickup at the bridge and the an attendant selector switch while retaining the single volume and tone controls. It features a short 22 1/2" scale maple neck and small alder body, finished in a tawny shade Fender called "Desert Sand". The three-saddle bridge uses the same components as the Telecaster with a smaller baseplate stringing from the back edge. The pickups are the same basic forms as Stratocaster units, wound a bit less and without exposed polepieces through the white plastic covers.

This guitar has beautiful undisturbed electronics featuring pots from the 25th week of 1958 and untouched wiring. The face of the original anodized metal pickguard has some noticeable wear but still looks sharp! It has survived in fully original condition without being stripped of its more valuable parts (knobs, neckplate, strap buttons, pots, and wiring) as so many have. The neat, comfortable little neck has the classic '58 Fender rounded profile and is dated to August of that year.

These guitars were many 1950s and '60s players' first electric, far more playable than most and stylish in an understated way. They were designed to be good enough to get kids hooked on playing electric, but not so flashy as to stop them still lusting after a new Stratocaster down the road! This is neat package, including the original tan case. The short scale is not what many modern players are used to but nonetheless this is a very cool genuine 1950s Fender guitar that plays and sounds great.


Thus guitar remains in nicely original condition, looking rather played in with some typical wear but never abused or altered in any way. The body finish has a collection dings, dents and chips overall but no large areas worn away. There are spots worn through the neck finish especially on the fingerboard in the lower positions, as is common. The guitar retains all original parts and hardware, except the little snap-on bridge cover is (as usual) missing.

A fairly large patch of the gold anodized finish has been strummed off the aluminum pickguard. This is typical for these 1950s metal pickguards (which Leo Fender himself preferred) after they have seen some serious play time. Fender sales called them "a disaster" because they felt this rapid wear would lead to large numbers of dealer returns, and eventually were able to persuade Leo to go with harder wearing (if not as cool) plastic by mid-1959.

The original small frets show some wear and divoting in the lower positions but still play well enough. The pickups are loud and strong, and this is a far better sounding guitar than many give Duo-Sonics credit for. Due to the very short scale heavier strings are a definite asset on this guitar. This is a "true relic" piece of 1950s Fender history and a fun guitar to play, still in its original tan '50s case which is worn but fully functional. Very Good + Condition.
×