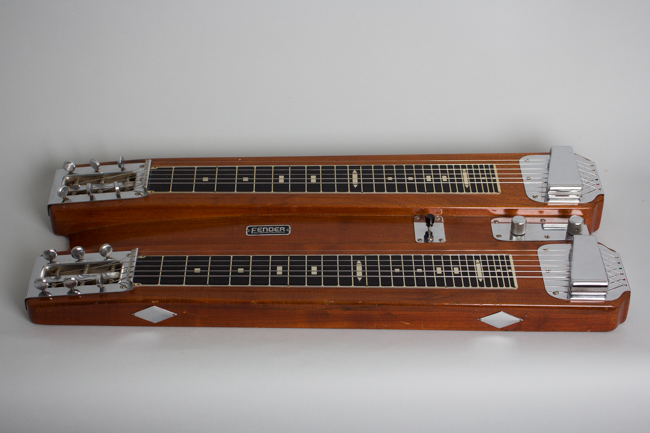 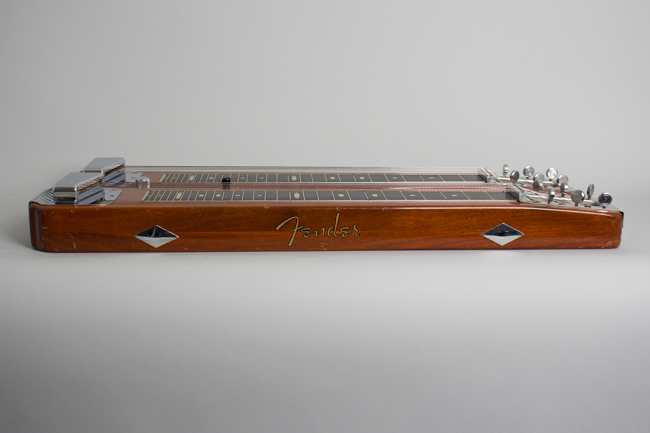 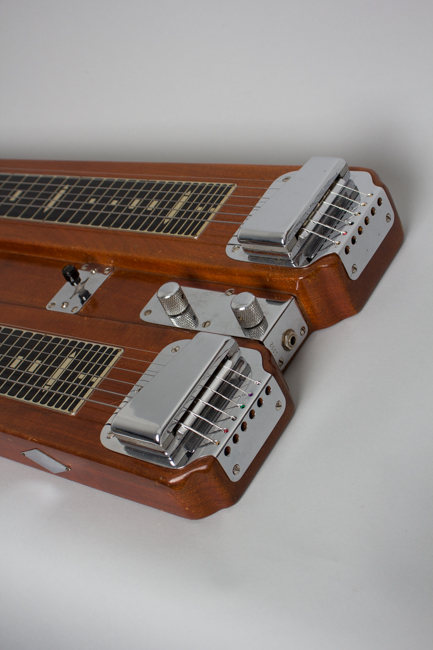 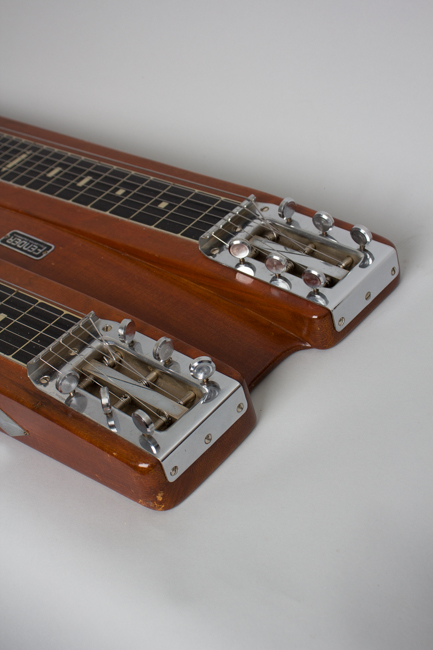 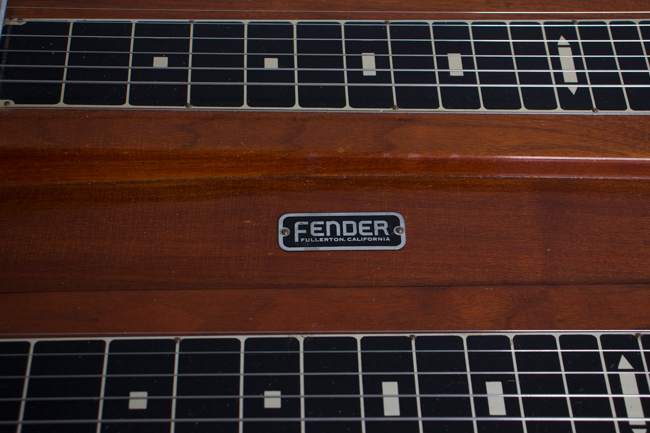 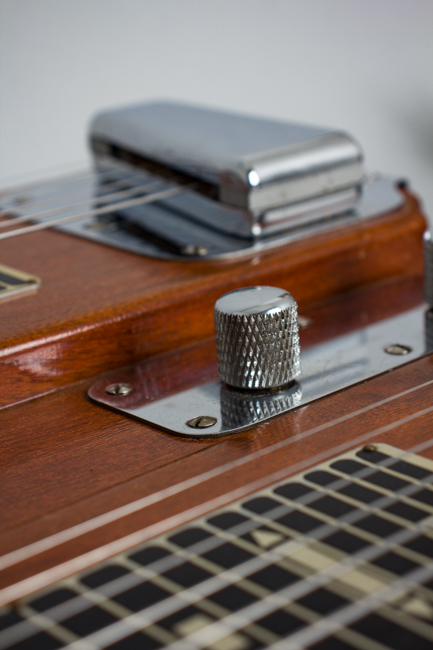 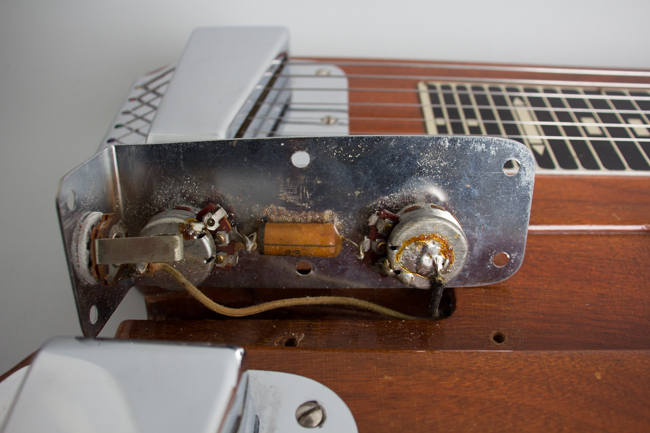 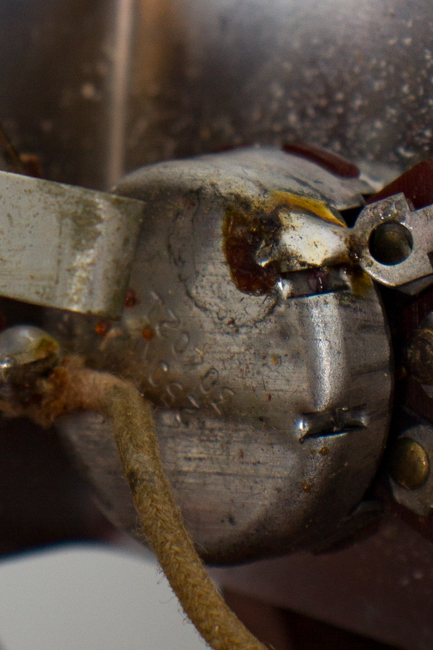 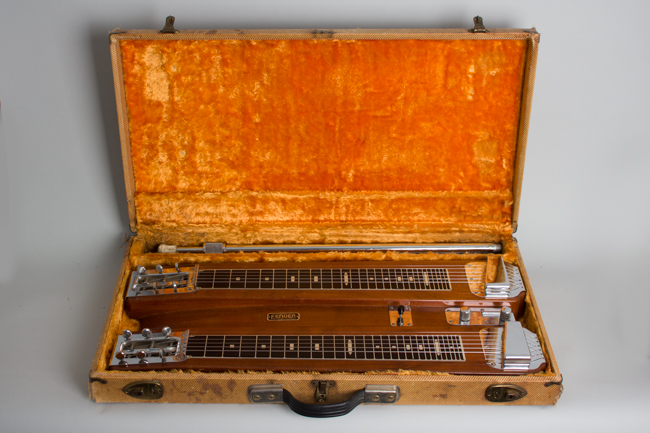 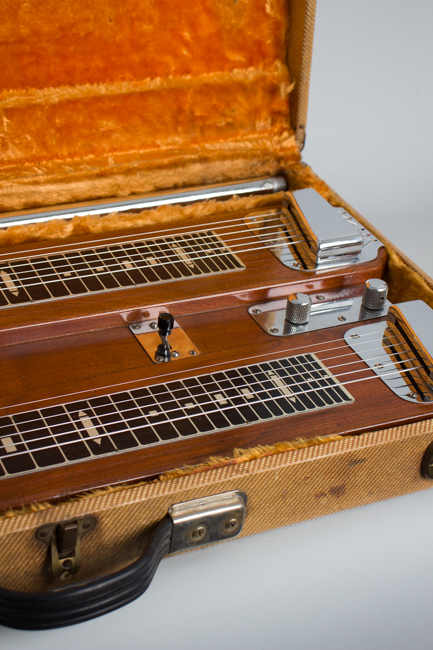 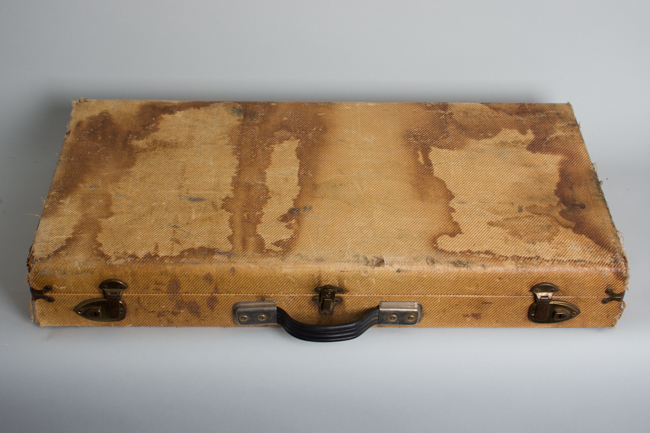 This is a nice example of a Fender high steel guitar from the turn of the 1950s, The Dual Six Professional. While not sold in anything like the numbers of the student Champion lap steel, this was one of the instruments that fueled the company's early growth before the Telecaster was born. The Deluxe (later renamed "Professional") models were offered in 6 and 8 string format as single, double or eventually triple-neck console steels, which many pro players were moving to.

The single-neck Deluxe was part of Fender's initial lap steel line in 1946 in a simpler, cruder form. This fancier more sculpted style was further upgraded in 1949 with Fender's improved "Direct String" pickup. The new version featured an oblong casing allowing a larger magnet on the bass side. This design was intended to give the bass strings a meatier tone while keeping the shimmer of the high noted unaltered.

The squared off headstocks have metal wells with the tuners mounted laterally and an integral raised flange acting as a nut. The metal fingerboard plates are pinned to the body with black screening to outline fret positions; this piece is shared with the down-market Champion model. The body is made of nicely grained walnut with a clear naturel finish; this dark wood was abandoned by Fender not too much later as the now-familiar blonde ash proved easier to work with. The serial number "1332" is stamped on the tail of the control plate and the visible pot date is the 21st week of 1950. The screws are all flat-head head as is typical of Fender pre-1952.

When this steel guitar was made Fender was just gearing up to get the Broadcaster Spanish guitar into production; the Precision Bass was barely a gleam in Leo's eye. While these would of course change the musical world at the time this was made these steels were Fender's signature instruments. While they are not as sought after as the instruments that fueled the rock and roll revolution, Fender's early steel guitars were made by the same craftspeople in the same place and time. This is a very cool and comparatively affordable piece of the early Fender grail, and a very fine sounding doubleneck steel guitar to boot!

This early Fender steel shows general wear overall but remains original except for the lower neck pickup coil, which was rewound to the original spec by Tom Brantley, the master of such things. The finish shows general wear with minor dings, dents and scrapes overall, but is not heavily worn. Except for the rewound pickup (and some attendant wiring splices) the hardware and internal wiring appears original with a legible date of the 21st week of 1950 on the volume pot, the tone pot is fully soldered over.

Overall this is a nice example of this early high-end Fender steel; a great sounding piece generally considered one of the best instruments of its type ever made. Includes the three original legs and the tweed case in very worn shape, with some heavy staining on the outside. The case is still fully functional, the original leather handle is long gone replaced with a much heavier duty piece likely in the 1970s. Overall Excellent - Condition.
×