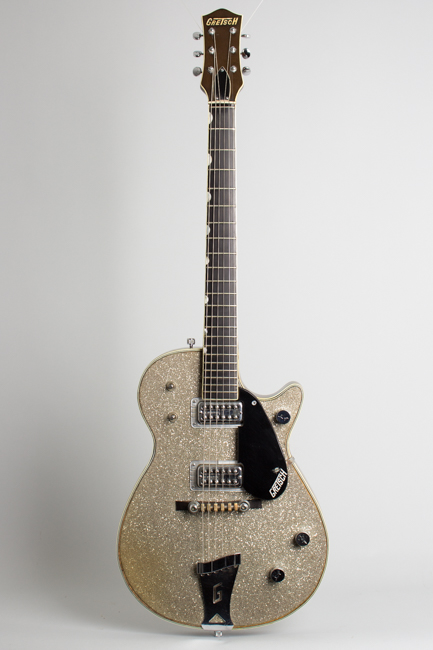 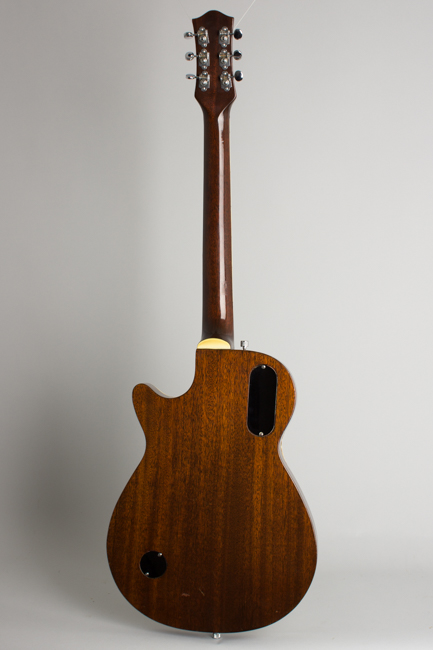 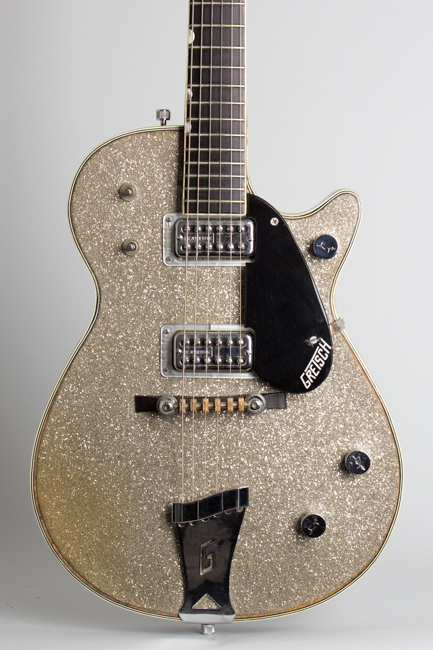 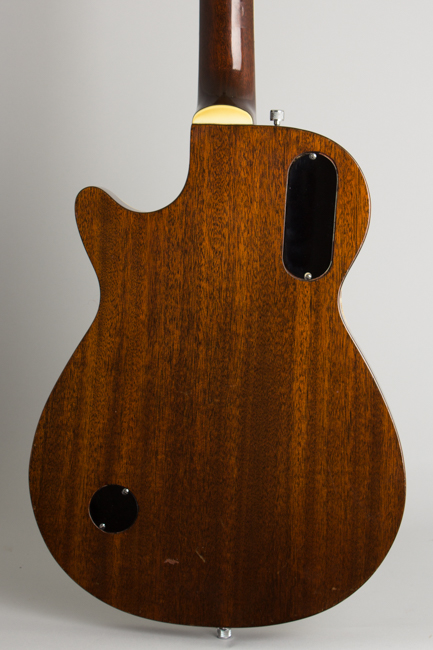 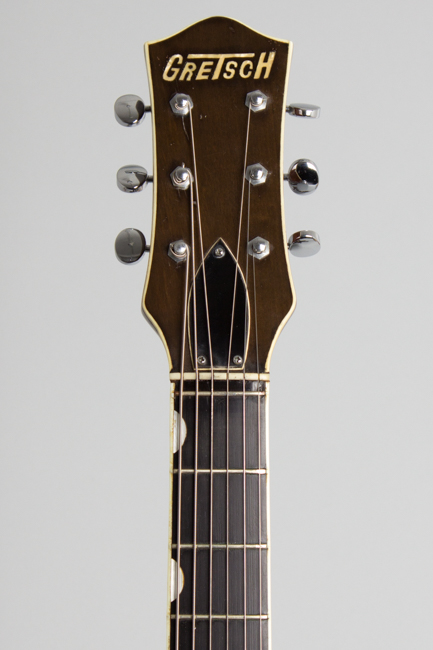 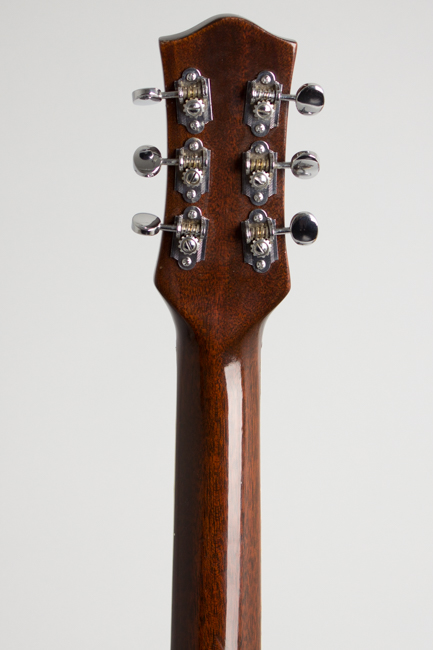 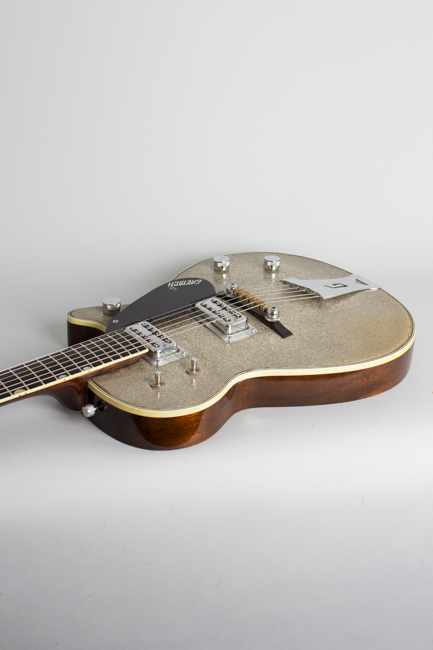 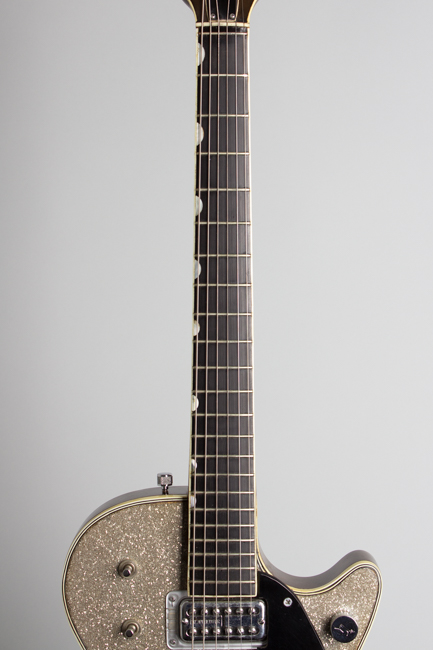 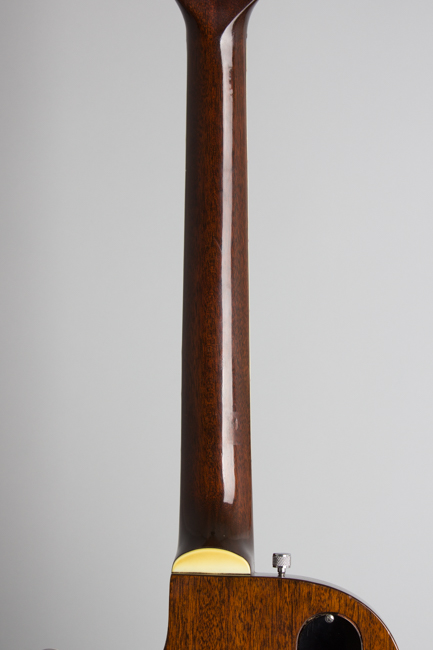 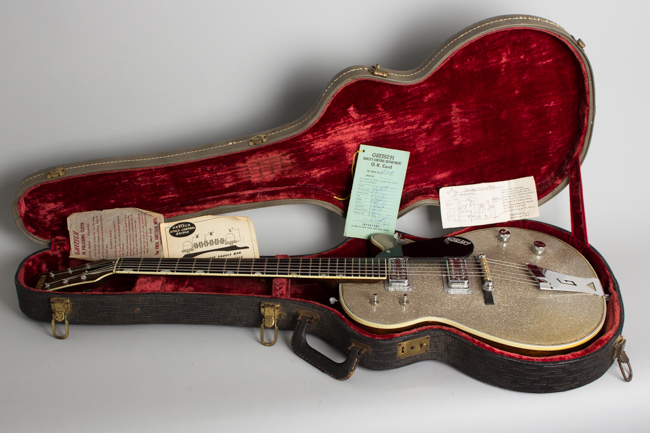 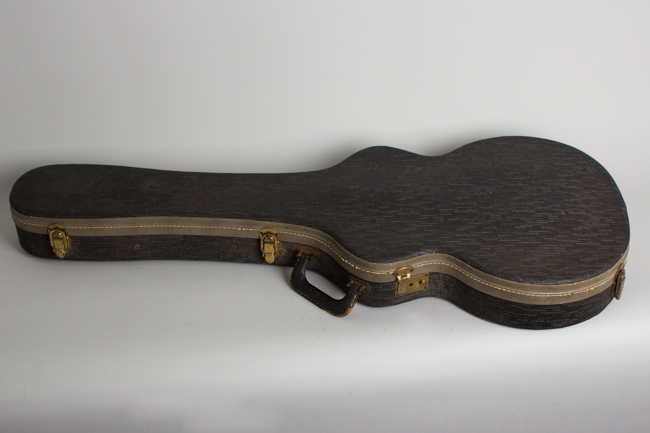 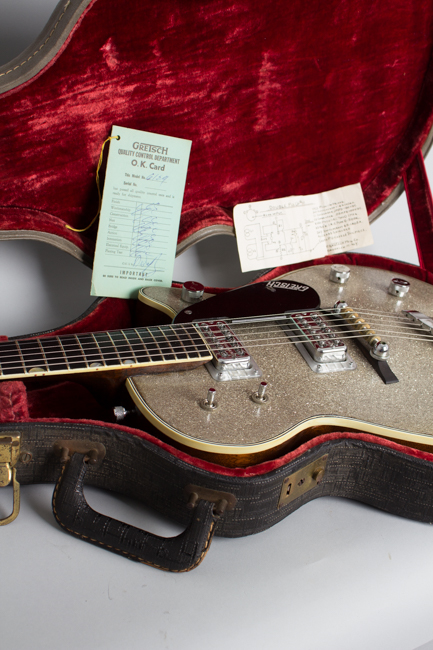 Simply one of the coolest Gretsch (or really any) guitars ever, the dazzling Silver Jet is much sought after model among connoisseurs. All original Silver Jets are very rare; this one dates to the very beginning of the 1960s when the model was produced only in tiny numbers at best. All Jet models were built in collective batches so the exact production figures are not known, but the black Duo-Jet and red-topped Jet Fire Bird made up the great bulk of instruments produced in any given batch.

This guitar has a serial number placing in in the very first batch of Jets built in 1960. It is also one of the first with a zero fret, a feature common to most other Gretsch models by that time. Other distinctive features of this era's Jet are the twin "Patent-applied-for" Filter'Tron pickups on a single-cutaway body, bound ebony "neo-classic" fingerboard inlay and 3-knob, 2 switch wiring scheme. This one has a fairly slim and shallow round-profile neck with more radius to the fingerboard than many period Gretsch instruments.

The eye-catching silver sparkle top is made of the same Nitron plastic material Gretsch used to cover drum shells, triple bound in ivory celluloid. Even in the Populuxe 1950's this model could be seen as gaudy...by 1960 the Duo Jet and Jet Fire Bird with black and red painted tops were still quite popular but the silver-topped variant is rarely seen. Legend has it that the model was considered overly extravagant by some others in the industry; Gibson president Ted McCarty (the man behind the gold-topped Les Paul, the Flying V and the Explorer) is reposted to have exclaimed "Gibson would NOT do that" upon seeing one at a trade show.

In 1961 all these models went to a double cutaway body style; the Filter'Tron equipped single-cut Silver Jet was in production for less than 3 years...by which time Gretsch charged an extra $20.00 for the sparkle top feature! The Silver Jet remains one of the most collectible of Gretsch guitars, a perfect example of the Brooklyn company daring to go where no others did. Along with the White Falcon it represents the Gretsch aesthetic at its most exuberant, and is still an unmistakable statement anywhere it appears.

This is a very nice original example, showing some light wear but no major damage or repair. The Nitron top material has shrunk just a bit at the edges and been neatly re-glued in spots. There is no cracking, splitting or deterioration in the silver sparkle plastic as seen on some from this era. The binding is overall very good with no celluloid deterioration evident, which is becoming increasingly rare with older Gretsch instruments. There is one very minor area of shrinkage on the top waist edge. All hardware is original and complete; the rear pickup trim ring has a split right in the center but this does not cause any functional issues.

The guitar shows some scuffing, dings, dents and minor play wear overall but does not appear too heavily used. The original frets have some light wear in the lower positions but the guitar plays very well and sounds great, with the particular bright roar that the Gretsch Jet is known for. It remains all original with the original hard case including some paperwork, including the hand filled-out "OK" quality control card. This is simply the nicest example of this model from the 1960s we have had. The Filter'Tron equipped Silver Jet is a much rarer find than the DeArmond pickup 1950's model, a super cool piece of Gretsch history and always a guitar guaranteed to get noticed! Overall Excellent - Condition.
×