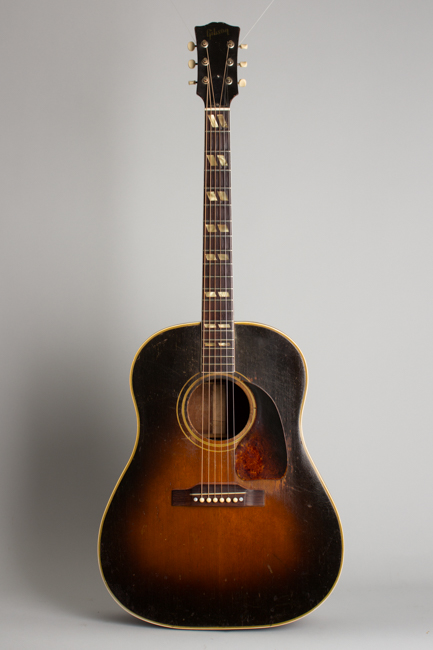 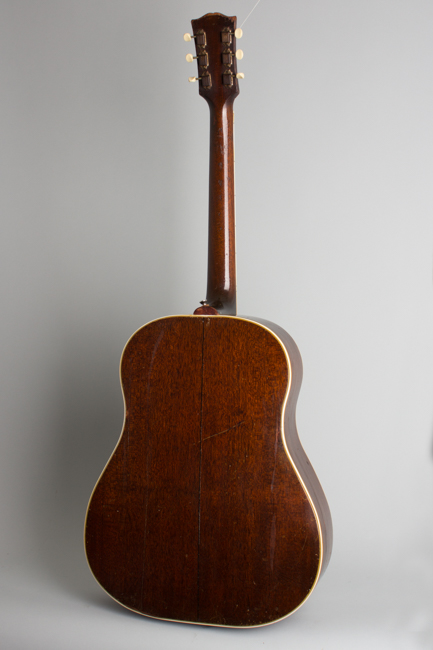 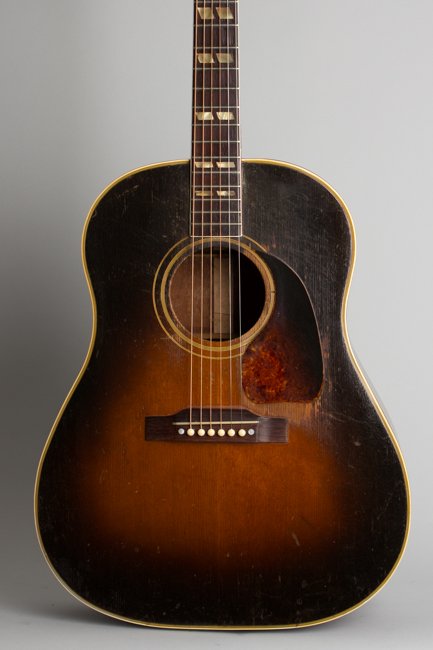 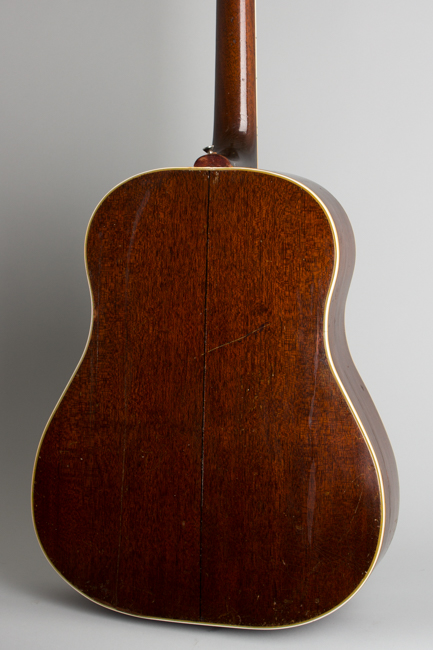 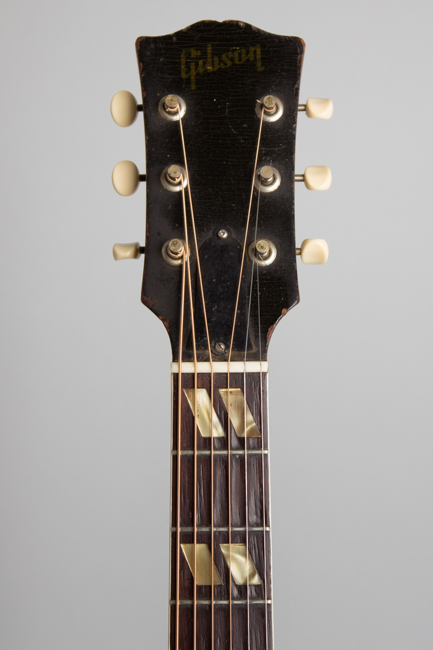 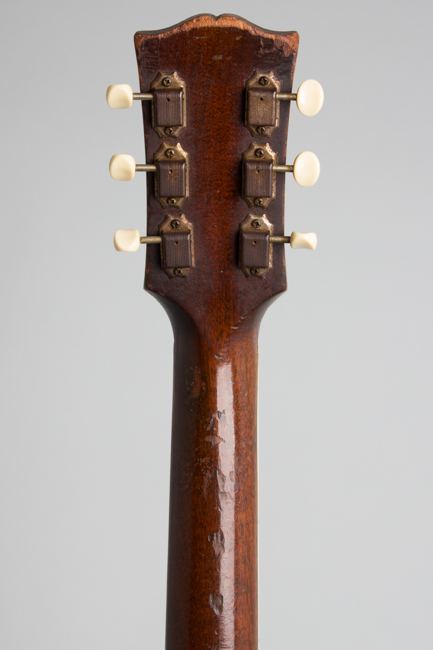 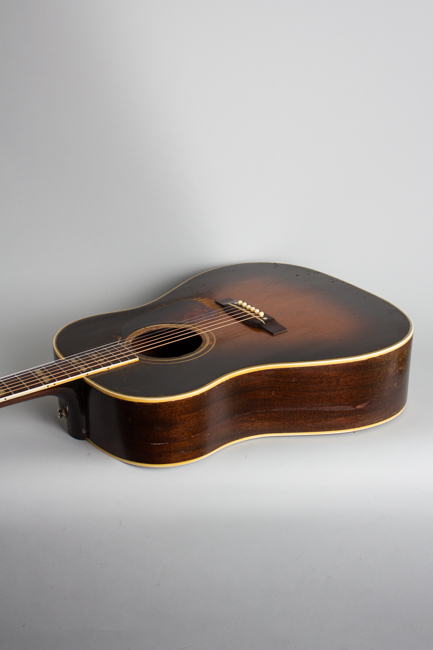 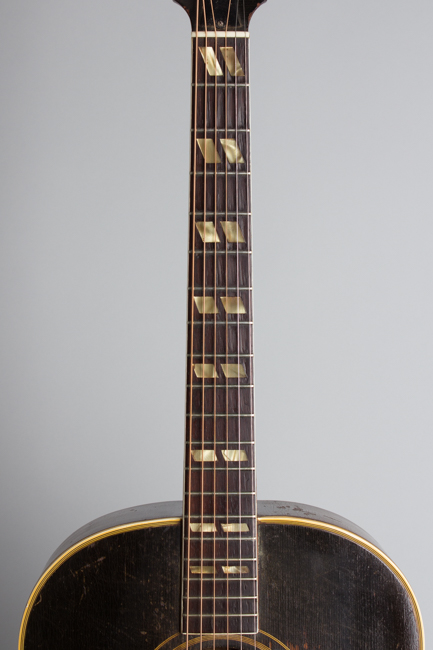 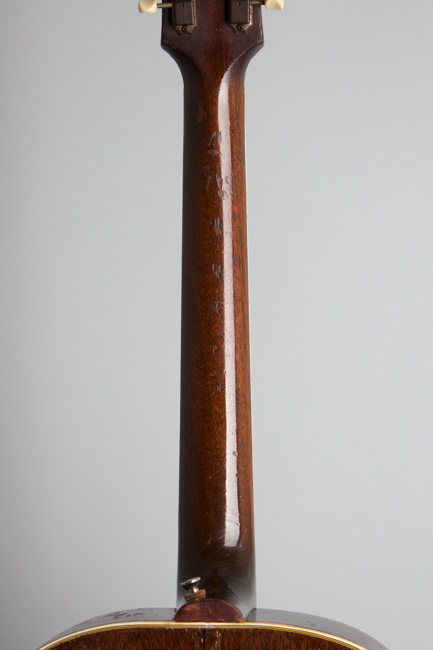 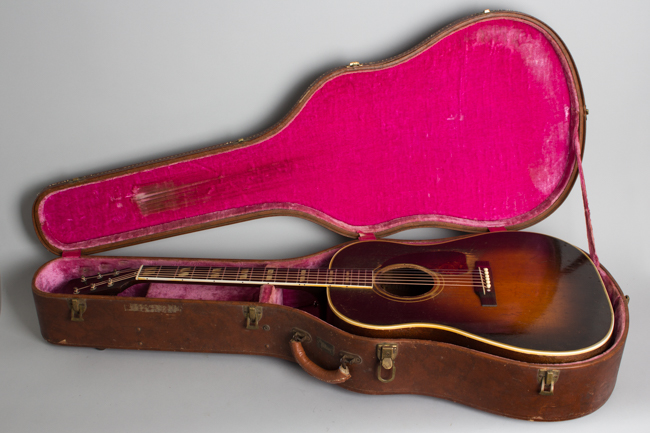 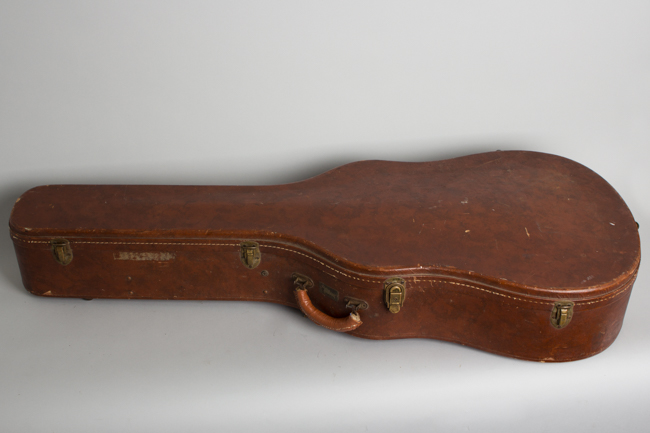 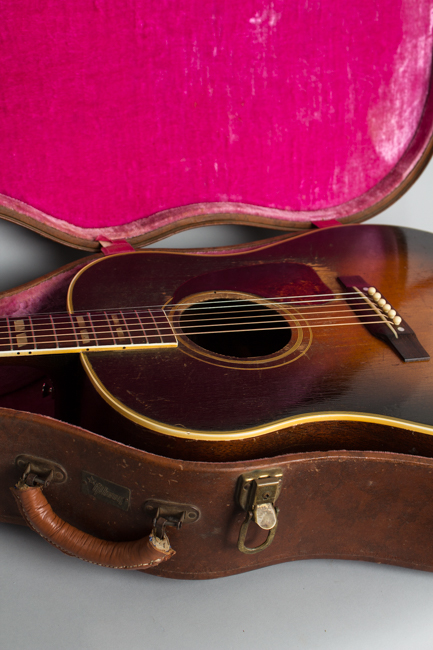 The SJ or "Southern Jumbo" sometimes feels like a bit of a forgotten model in Gibson's postwar flat-top line. It was not quite as simple a working man's guitar as the more austere J-45 but not as yee-haw fancy as the big 17" SJ-200 or J-185. The SJ features a bit more flash compared to the J-45 but is built on the same formula; a sunburst spruce top on a 16" slope-shouldered mahogany jumbo body, with a mahogany neck and rosewood fingerboard.

The cosmetics of the SJ are fancier all around. There are multiple layers of binding around the body and sound hole, and the bound fingerboard is fitted with pearloid double parallelogram inlays. The rosewood bridge is a top-belly design, which looks pretty much like an upside-down Martin bridge. The neck on this example is a fairly shallow "C" profile slimmer than many early '50s Gibsons, and thinner at the nut than the average 1950's Gibson. The headstock has only a plain gold "Gibson' logo but the tuners are individual Kluson Deluxes as seen on many mid-line Gibsons.

This 1952 SJ is rather well-worn in but still sports a very sharp look but, more importantly, a big powerful sound. Among SJ fans perhaps most prominent is Don Everly, who used a 1953 SJ to create the famous open-tuned chord hooks on the Everly Brothers' early records. This guitar has plenty of ring with some of that same punch when pushed. This is a fine playing and truly great sounding example of this classic Gibson flat-top; the kind of guitar that makes you want to sit around singing country songs all night, even if you're in the middle of the city.

This old Gibson shows its age and a lot of play time decades ago but remains a superb playing and sounding guitar. The finish has a quite a bit of general wear with some heavy checking and innumerable scrapes, dings, dents, and scuffs. The top has some fairly deep pickwear around the soundhole and pickguard, well into the wood around the sound hole edge and of the rear of the 'guard.

The back shows some long repaired cracks, including a re-seal of the center seam. These have all been solidly sealed with some visible finish work above them, the back appears to have been buffed as part of this process. There is a long grain crack through the waist on the upper side, again solidly sealed but still visible. Amazingly the top has no cracks at all, not even in the common spot off the top edge of the pickguard.

The original bridge has been visibly reglued but the original small maple bridgeplate and securing bolts are still intact. The back of the neck has some fairly deep dings and capo wear, smoothed down a bit by years of subsequent play. The neck has been reset, with some visible touchup around the heel. A strap button has been added to the heel which caused a small crack just beneath it, neatly sealed up.

The original narrow frets have been lightly crowned, and show some minor wear but despite this and some noticeable divoting to the fingerboard playability is excellent. This SJ has that classic Gibson sound, warm yet incisive with a decent amount of power when pushed hard. This is a superbly player-friendly instrument, the kind of guitar that makes a lifetime companion as it may well have already done for more than one user. It is still housed in its original brown HSC, which shows some road wear but still does the job. Overall Very Good + Condition.
×