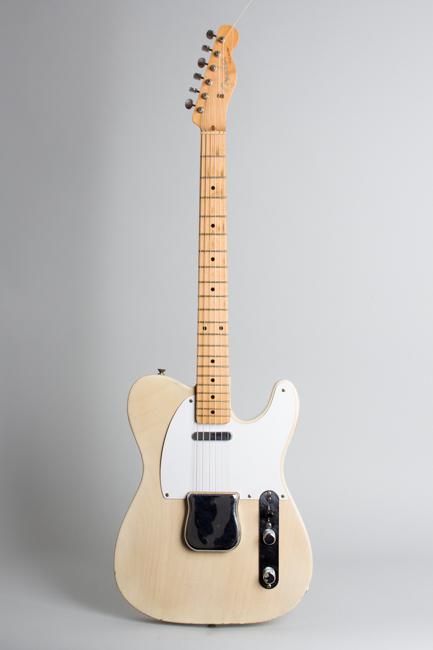 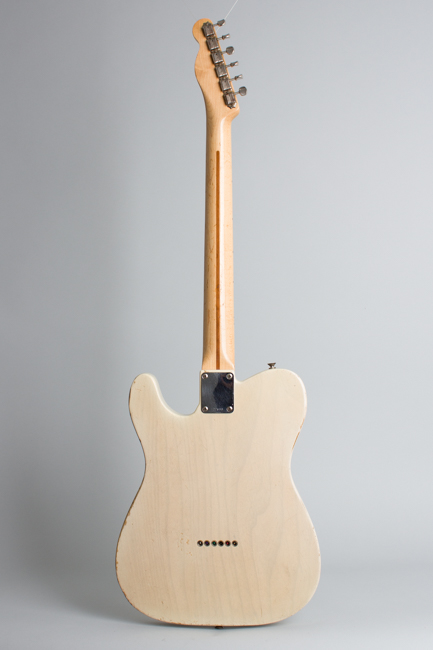 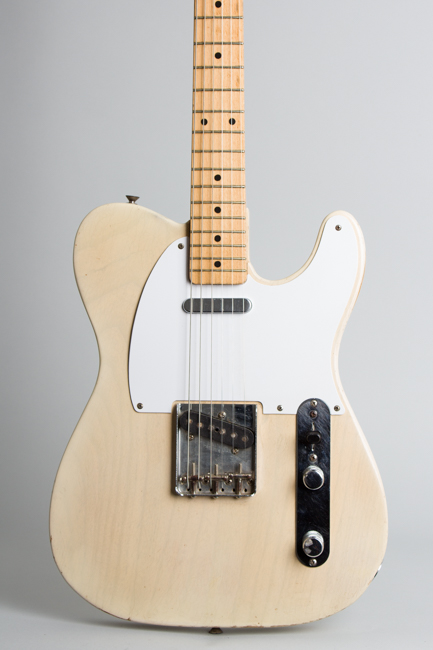 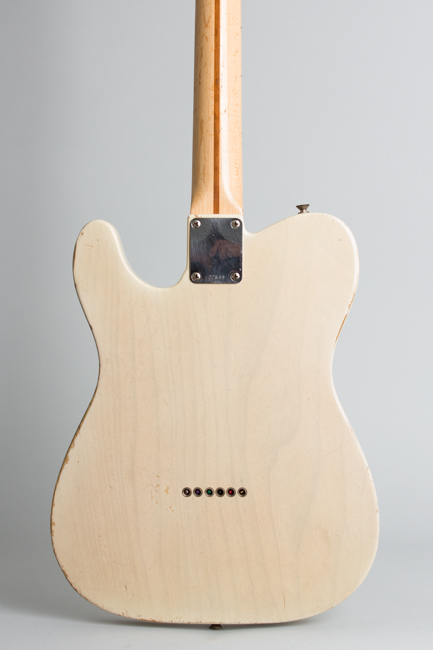 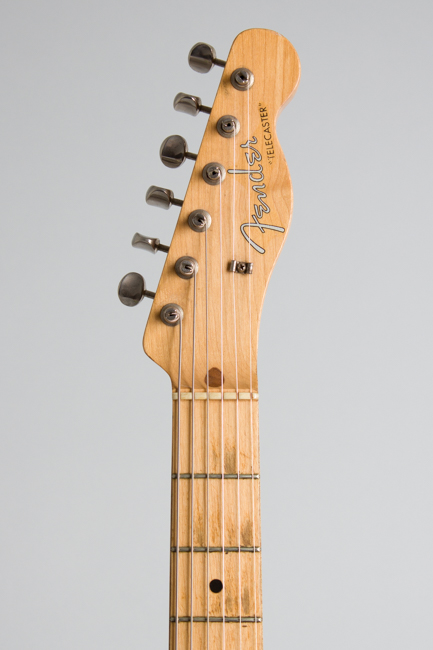 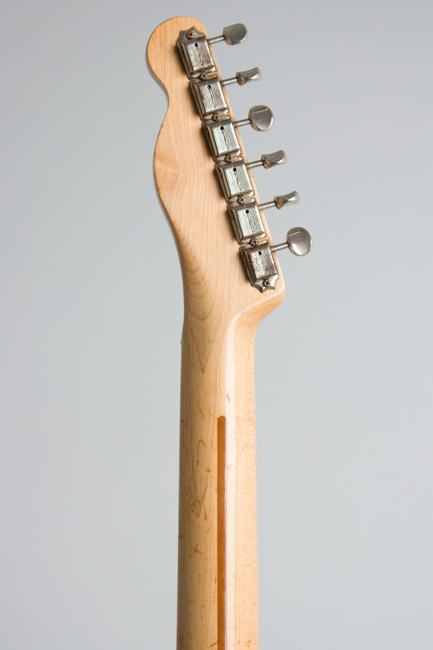 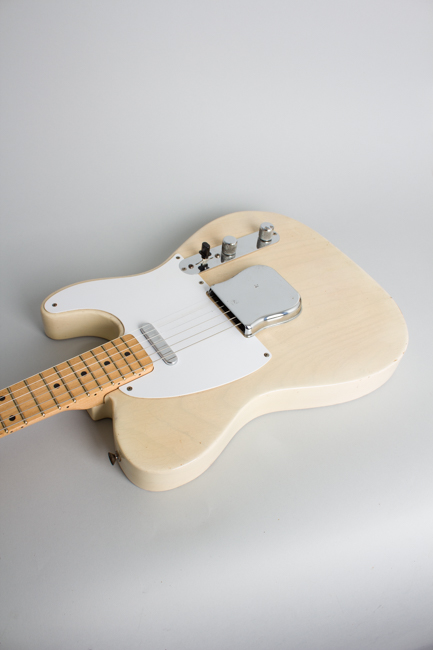 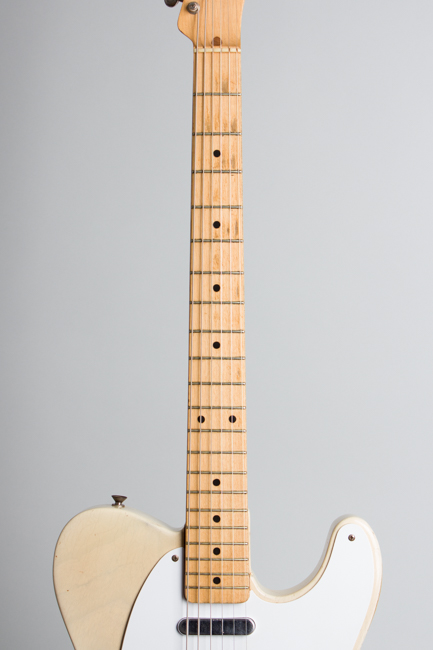 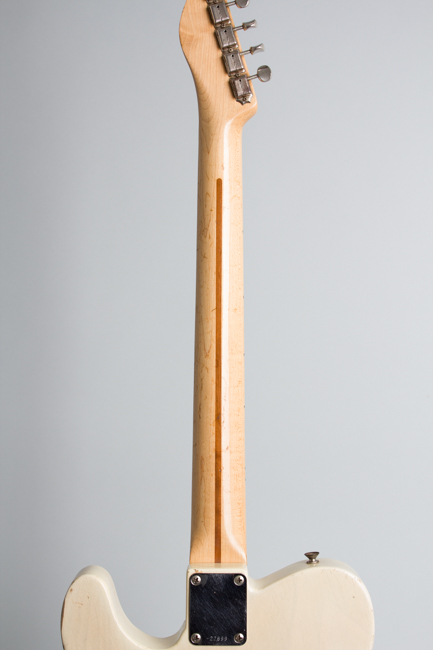 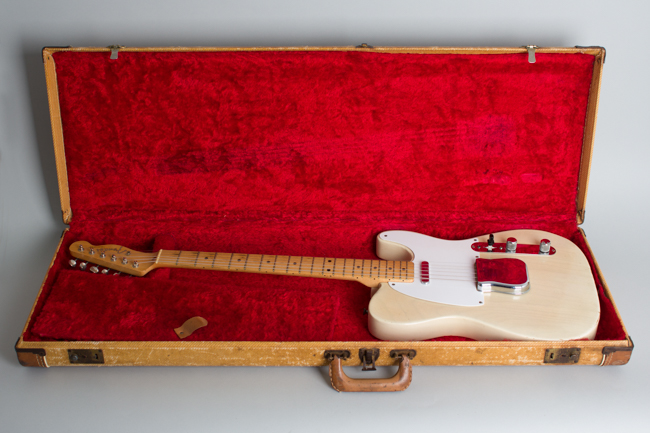 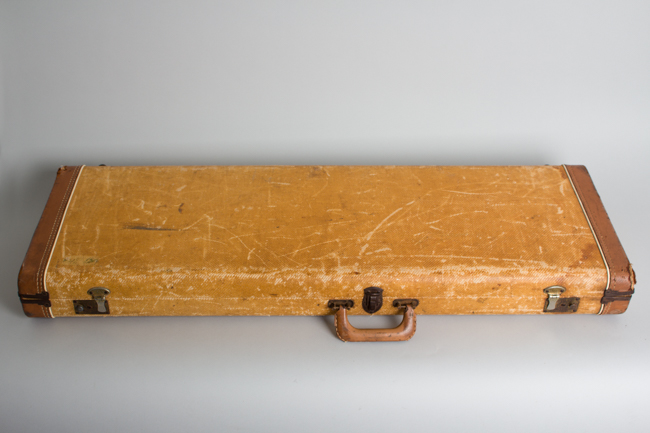 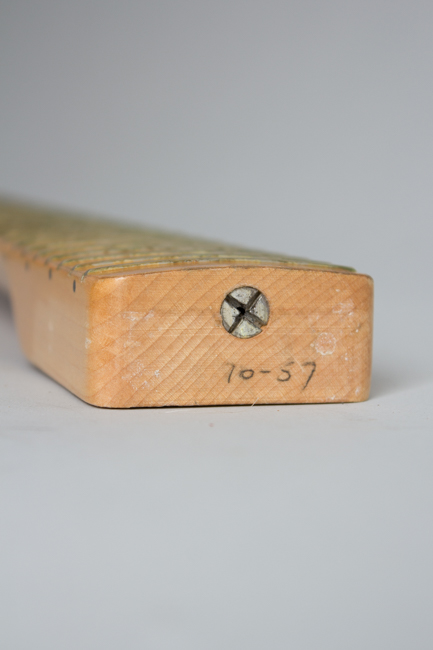 While not exactly an untouched "closet classic" guitars, this completely original "white guard" 1957 Fender Telecaster is not heavily played-in either. Overall it shows some minor wear but no notable abuse or repair, surviving in nicely all-original condition pretty much as it left Fullerton during the Eisenhower administration.

This Tele shows characteristic features of this period. The most immediately noticeable is the single-ply white plastic pickguard which in 1954-5 replaced the earlier black phenolic on Teles and Precision Basses, making the look consistent with the then-new Stratocaster. The ash body has a much lighter and "whiter" blonde finish compared to the more amber earlier '50s-style butterscotch hue, with some nice ash grain showing through. This "white-blonde" look would be the norm into the '60s, continuing up into the CBS era. This one strings through the body as Teles had from the beginning; a year or so later Fender altered to the "top loader" stringing for a couple of years.

The one-piece maple neck is dated 10-57 at the heel. This neck has a fairly slim contour, the "V" spine used in 1957 has a softer shape than some but is not "C" shaped as the earlier models. On the headstock the old-style script Fender "Telecaster" logo decal is positioned above the newer "butterfly" string tree. The frets are still the original small wire.

The staggered-pole lead pickup is generally similar to earlier Telecaster units but with the altered magnet layout; the center poles are raised slightly. Like all Telecasters prior to the CBS era this guitar is wired with a "deep bass" cap engaged in the front switch position; the middle position is the neck pickup alone, while the back switch setting selects the bridge unit. The pickups can be combined only by carefully positioning the lever between settings, which works fairly well on this guitar.

The serial number is stamped on the neck plate having been moved there from the bridge a couple of years earlier when Fender harmonized all their guitars into one number series in 1955. This 5-digit number is preceded by a minus sign AND stamped at the bottom of the plate, combining two eccentricities of Fender neckplates from this specific period when it seems the stamping contractor could not get it right. The knobs are a medium pattern knurl with a flat top and the switch tip is the "top hat" style that has endured as a Tele trademark.

This 1957 Telecaster remains a fantastic-sounding guitar and a joy to play. By this point the Telecaster had become a success, renowned as a popular tool used by working musicians, including a host of early rock'n'roll and country players. Many have been played for decades and worn virtually into the ground; this one has seen less use than many and remains a truly great instrument, a genuine relic of the best years of Leo Fender's original company.

The neck finish has some typical minor fretboard wear to the wood, and light loss on the edges. The original frets show some minor wear but nothing that affects playability. The hardware is all original and intact; there are a couple of small chips to the chrome on the tone knob and the pickguard has cupped up slightly on the upper edge. The bridge has minor corrosion (mostly to the steel saddles) and the snap-on cover is intact, also showing minor wear to the chrome. This is a superb playing and sounding all-original Telecaster, housed in a somewhat worn but intact original "Knuckle buster" tweed HSC. Excellent Condition.
×