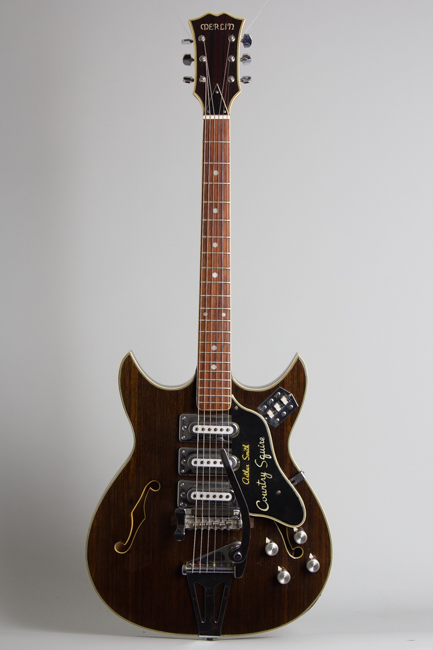 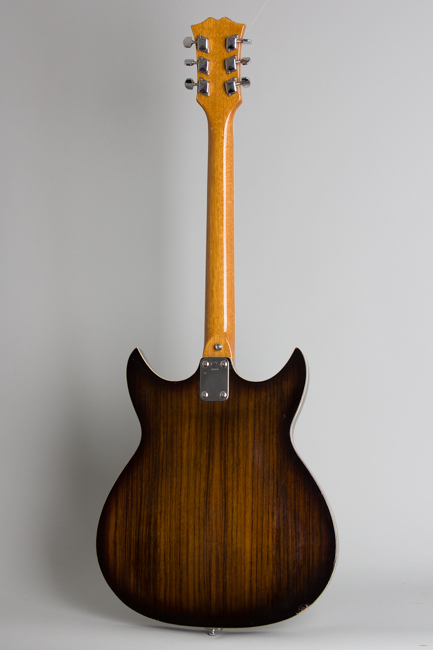 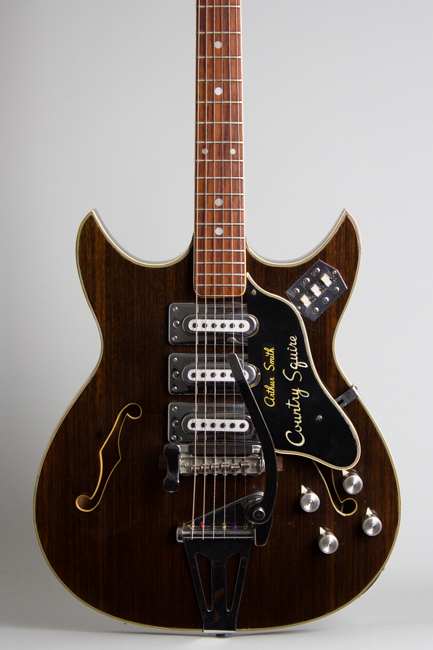 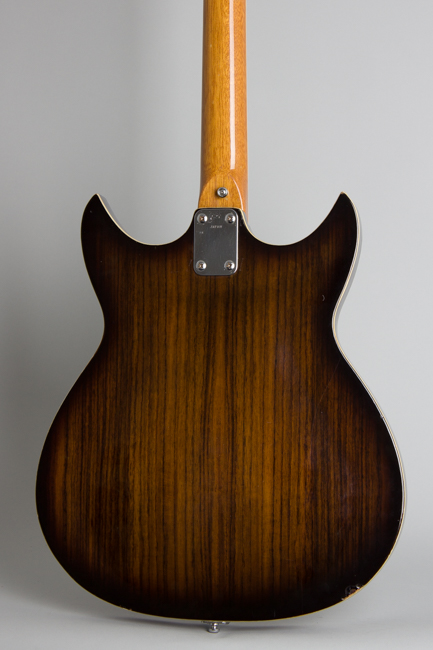 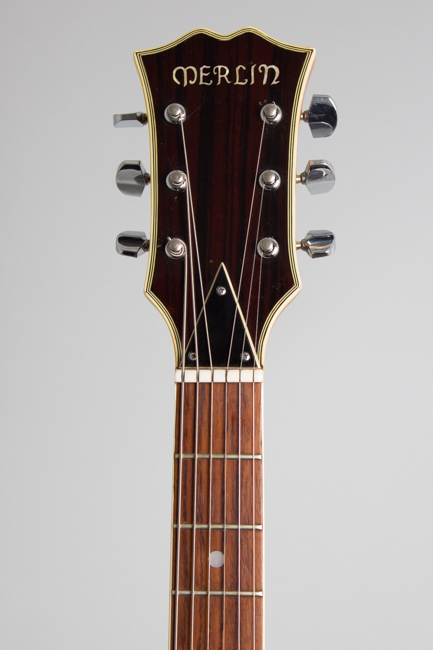 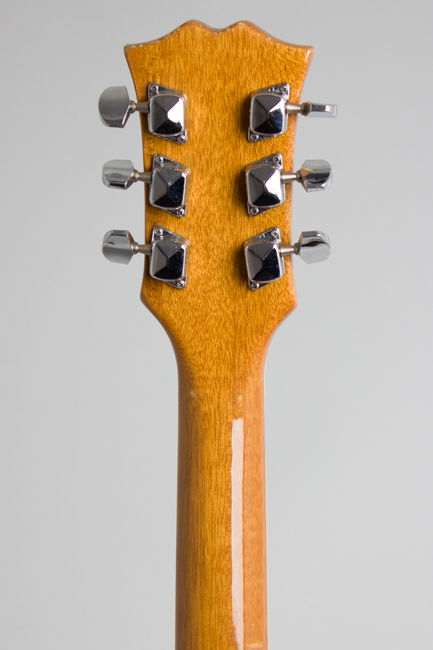 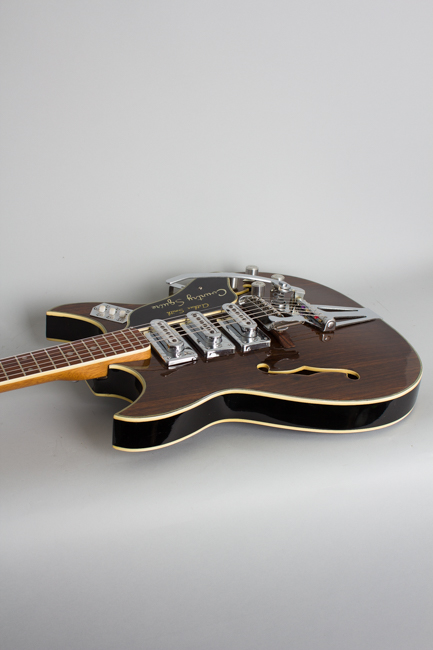 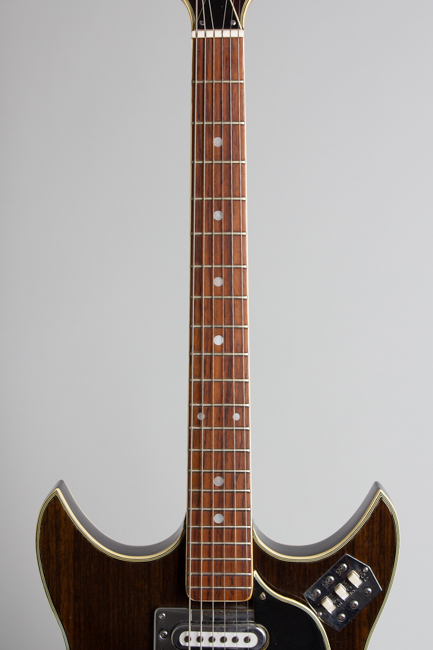 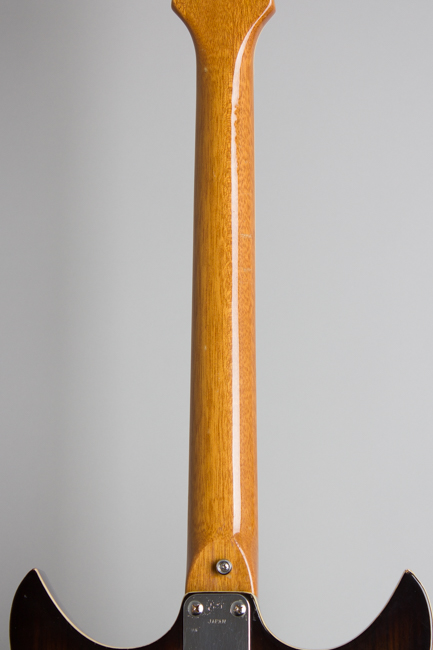 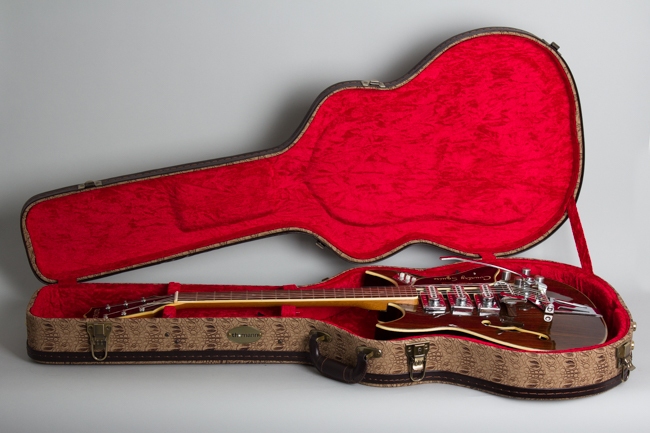 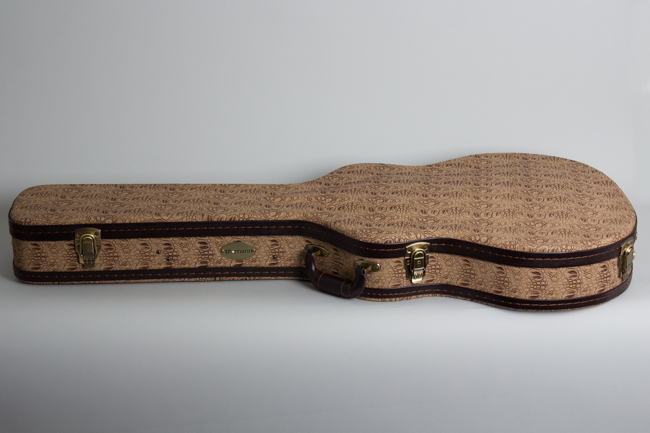 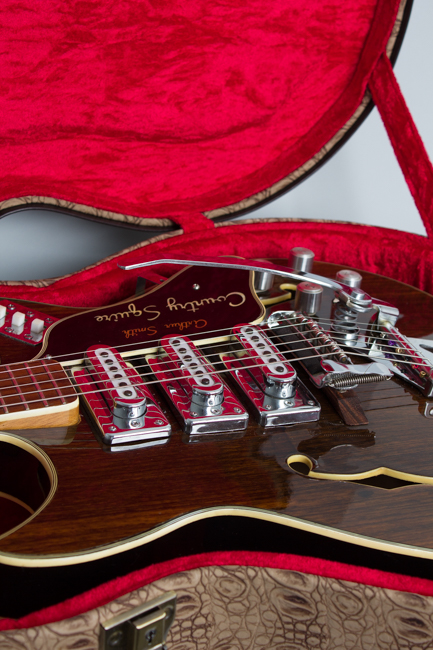 In the late 60's then-regional North Carolina hardware chain Lowe's sold guitars; in that guitar boom era practically anyone who could, did! This is one, a rare fairly deluxe Japanese-made hollowbody carrying the endorsement of Arthur "Guitar Boogie" Smith, then years past that big hit but still active in recording and TV and a local NC hero. And believe it or not, his real middle name was actually Merlin!

That's a likely missing link between the North Carolina legend and the short-lived Japanese-made guitar line that bore his signature. Any fan would be quick to point out that Smith played Epiphone, Gibson and Fender guitars and likely never used one of these signature models in concert or recording. He probably received a royalty on them and may have promoted the line one way or another. This collaboration also produced a less popular (and less resilient) flat-top acoustic model with a shared name and aesthetic.

If this looks suspiciously familiar to the import-60s-guitar afficionado, it's because the guitar is better known as the Greco Model 921, distributed nationally By Goya in the late 60's under their budget-brand Greco name. The difference is Smith's endorsement, signified by that elegant namesake pickguard which gives the Merlin its distinct North Carolina provenance, "Merlins" only being sold by Lowe's. The 1968 Greco catalog lists the model 921 at $99.50 retail; Lowe's may have added a few bucks to the price due to Smith's endorsement!

Like their Greco siblings Merlin branded guitars were sourced from Japanese guitar magnates Kanda Shoka Company. This guitar is probably the most famous of Merlin-branded offerings, a fairly elaborate creation as period Japanese imports go. The double cutaway thinline hollow body is faced in rosewood veneer, muilti-bound with a bolt on rosewood-fingerboard neck. There are three single coil pickups in chrome surrounds, controlled by three on/off switches, three delightfully heavy-duty hi-fi style volume knobs and a master tone. The bridge is fully adjustable, set to a very acute neck angle which provides a good break off the somewhat flimsy vibrato. The most oddball feature is a flip-up mute similar to Vox practice; it actually works pretty well.

Less than a dozen or so models were ever graced with the Merlin brand name, and many of these models were also slightly-altered versions of existing Greco models. Some were other limited promotional guitars like the super cheesy but still endearing Merlin "Red Baron" featuring graphics of Snoopy's arch nemesis! This is actually a good quality instrument considering its provenance. If Arthur's "Country Squire" was not quite the equal of Chet Atkins' "Country Gentleman" you can bet its price tag was a whole lot more affordable, especially if you were browsing for guitars in a hardware store!

This Japanese-made rarity is in excellent condition overall, with practically none of the typical checking these often show and hardly any play wear. The finish and hardware show some light scuffing and very minor dings and dents, that's about it. This guitar plays well (as well as any of these 1960's Japanese hollowbodies anyway!) with a nice straight neck and good frets with virtually no wear. Even the mute works! It comes in a later non-original, but super stylish faux snakeskin hardshell case. Excellent + Condition.
×