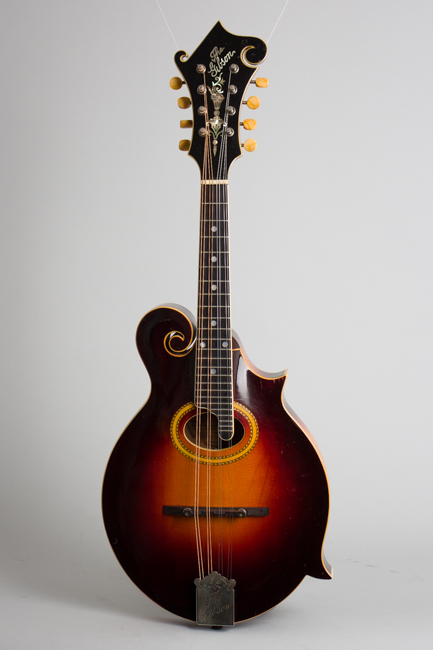 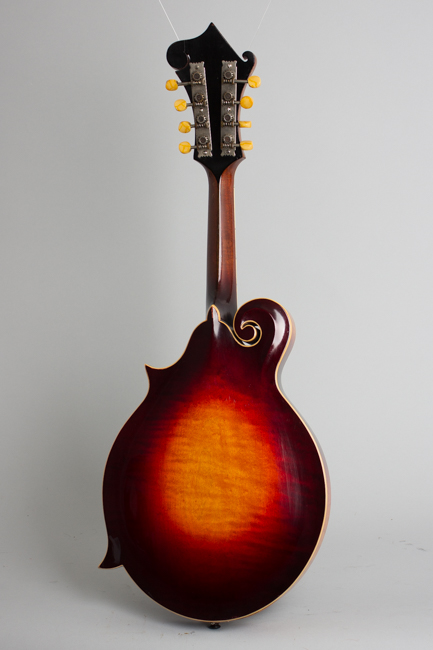 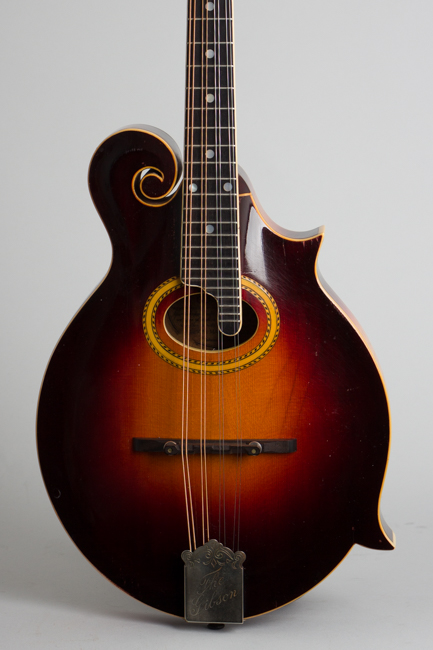 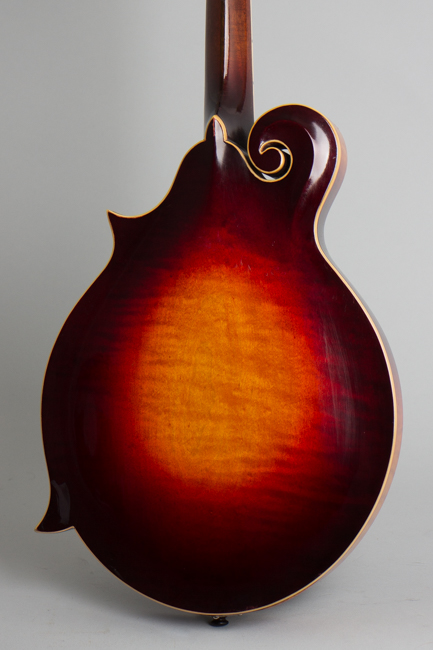 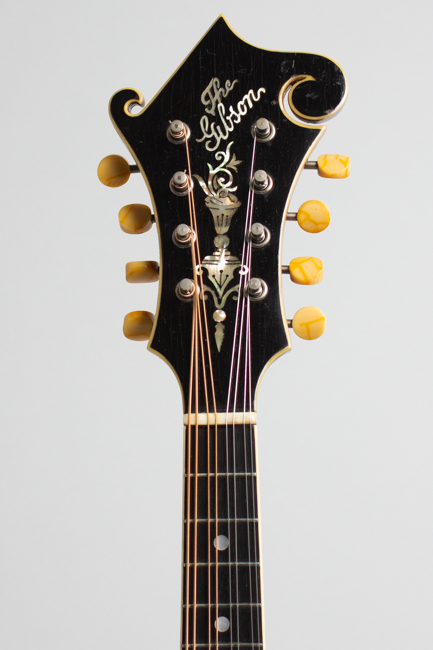 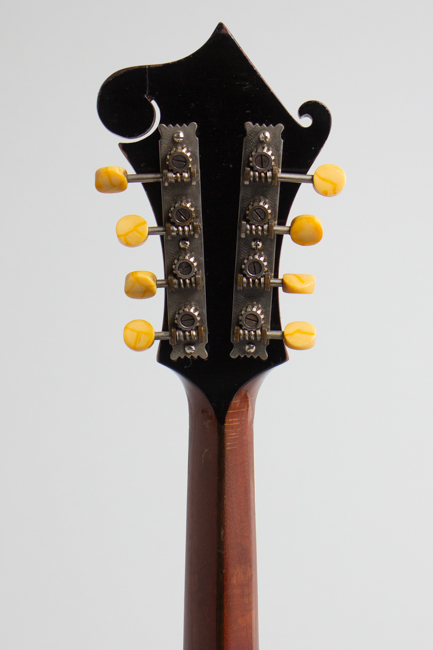 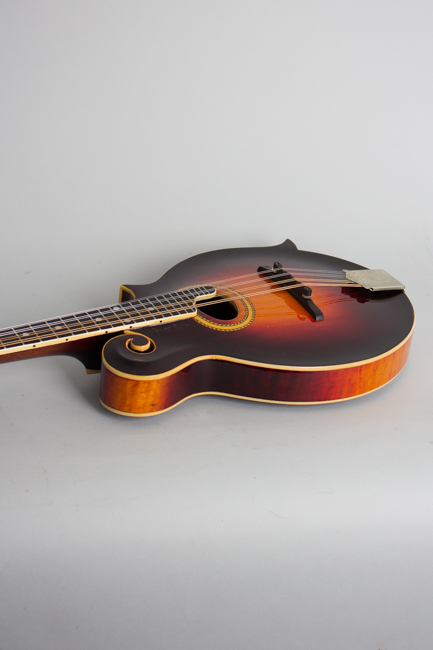 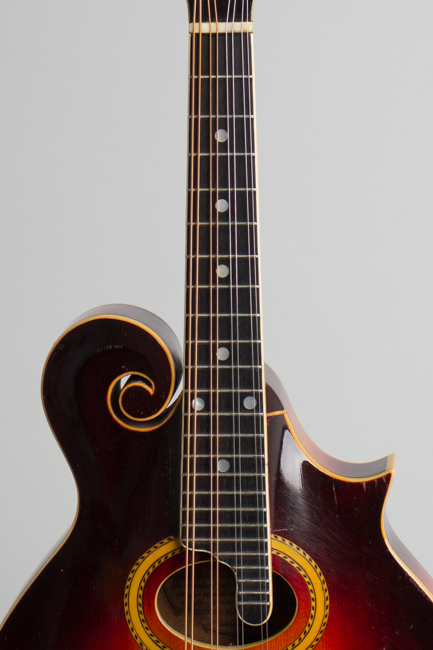 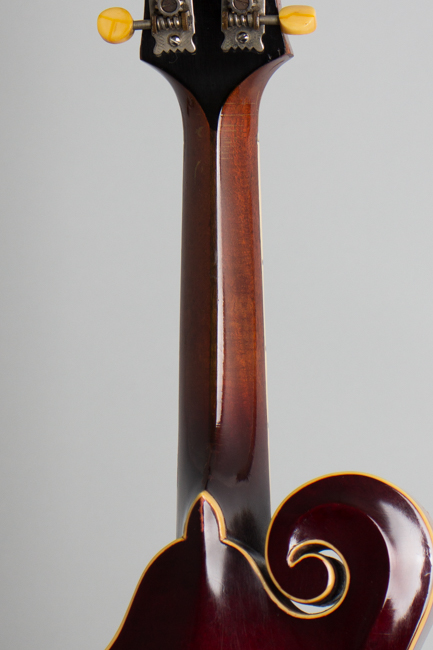 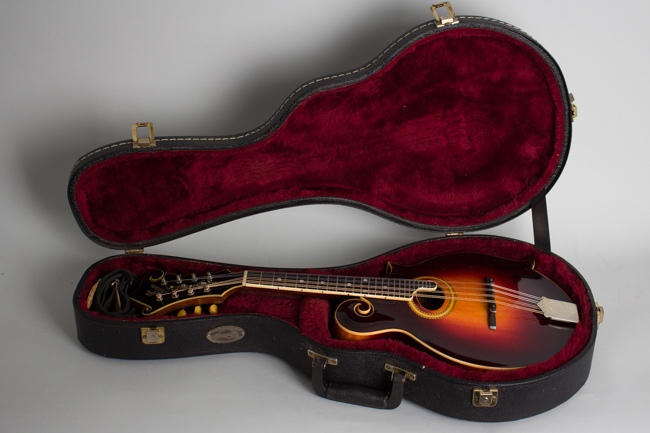 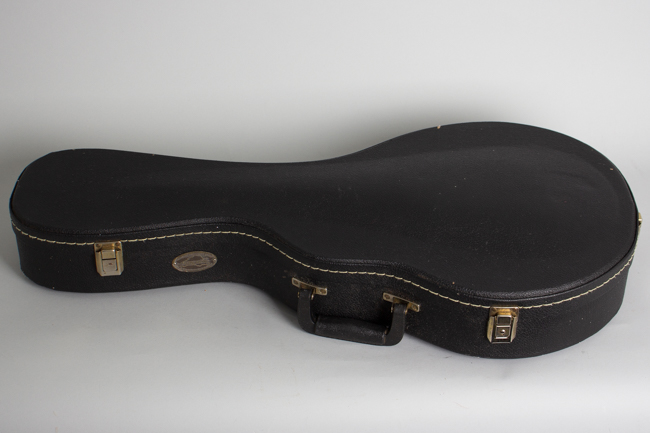 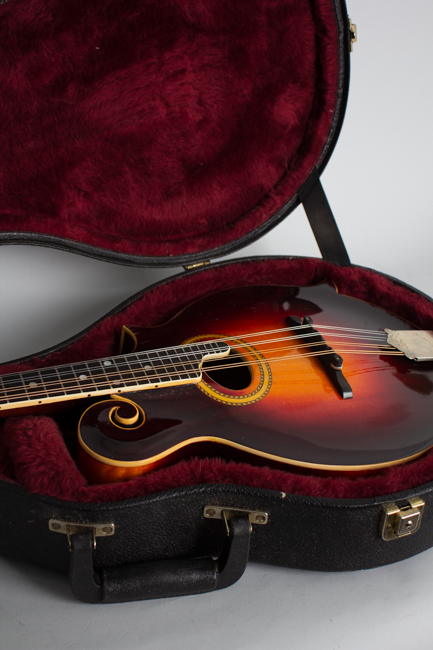 This is a very interesting example of an early Gibson mandolin that almost certainly was returned to the factory for work more than once in the decades after it was originally made, a not too uncommon situation. The instrument is an F-4 originally built in 1917, confirmed by the factory order number (FON) stamped on the neck block; the serial number on the label is too obscured to read clearly. Sometime in the early 1920s (probably around 1923-4) it had a Virzi tone producer installed and a second label added with Virzi serial number #10718. This was a Gibson factory service job at the time, something Lloyd Loar personally advocated. As this entailed removing the back, it was probably at least partially refinished at this time. Sometime later (probably around 1960) it was returned to Gibson for service again, refretted and refinished with contemporary sunburst lacquer.

The F-4 was Gibson's top of the line mandolin at the time this one was made and the company flagship in the 1910's. The scroll-body instrument had been fully perfected from its early 3-point body form and was an utterly distinctive creation, almost certainly the finest mandolin in the world in 1917. Many of these were the personal instruments of professional players, Gibson teacher-agents or their best pupils; at a price of $150.00 the f-4 was an extremely expensive and prestigious instrument. It would have been the top choice for practically any virtuoso mandolinist in the WWI era.

Under its later-style sunburst finish this F-4 has typical features for the late 1910s. The one-piece maple back has a discreet but noticeable flame figure; the F-4 was the only Gibson mandolin in 1917 actually made of maple as the catalogs specified. All binding is grained ivoroid, and with the double-flowerpot pearl and abalone inlay on the headstock the F-4 exudes a particular Art Nouveau grace and class. The Handel tuners are period but lack the inlaid buttons usually seen in 1917; they may have been replaced by Gibson when the Virzi was added.

The Virzi "Tone Producer" is actually a thin spruce disc suspended under the top. Produced by the Virzi Bros. violin company in New York it was championed by Loar and offered by Gibson as an optional (and extra cost) feature. The Virzi was usually installed in Loar's pet Master Model instruments; it is relatively uncommon in a round hole mandolin. A small number of "Virzi F-4's" are known to exist, and this retrofitted example is particularly unusual. The "Tone Producer" was intended to add extra harmonic partials to the sound; many players have been disappointed that it does not actually assist volume. What it does do is help produce a more complex sound with richer overtones; that is the theory anyway! Some have been removed by players who want a louder more driving tone, but those that remain are a fascinating part of the Loar era story.

The F-4 Artist's model was Gibson's highest grade mandolin until the advent of the Master Model F-5 in 1922, and even after that model's introduction remained an important part of the company's line. The owner of this one seems to have treasured their instrument and had it kept up to date by the Factory over decades; perhaps they even knew Master Loar and had the Virzi installed at his suggestion! Whatever its story this mandolin's journey through different eras of Gibson history have given it a unique character.

This is a sweet sounding old F-4, with a unique mix of features from across the decades. The vibrant sunburst lacquer finish as noted appears to date to the late '50s or early 1960s; it is definitely Gibson factory work. There has been some subsequent wear, with light pick marks here and there and some minor checking to the top. The back of the neck has a bit of playwear in the lower positions and some chipping near the heel. Other than that there is not a lot of wear.

There is an old typical scroll repair on the headstock, which is very inconspicuous may have been fixed in the 1920s by the look of it. Apart from one small back/side seam bulge above the tailpiece there are no other structural repairs. The fingerboard appears to have been refretted and rebound when the refinish was done. The oft-missing celluloid pickguard is gone, the original tailpiece is intact and the tuners are period if possibly not the first original set. The bridge is a more recent adjustable 1920s style. This "hybrid" F-4 is very good player, with a very comfortable action and a nice singing tone, somewhat mellower than the typical f-hole mandolin, but with plenty of body and "bite" when needed. This is a neat playable piece of Gibson mandolin history, housed in a later HSC. Generally Excellent - Condition.
×