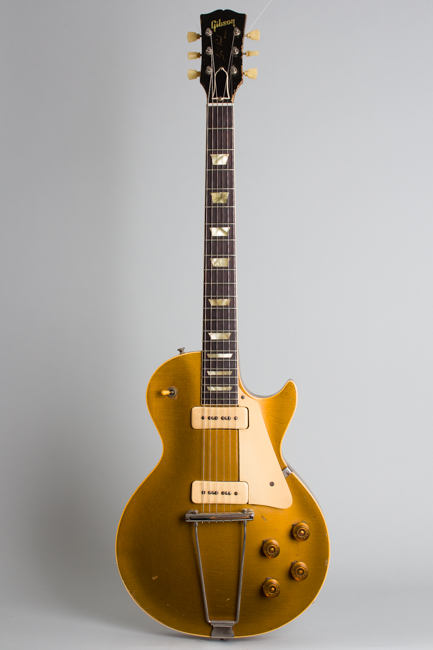 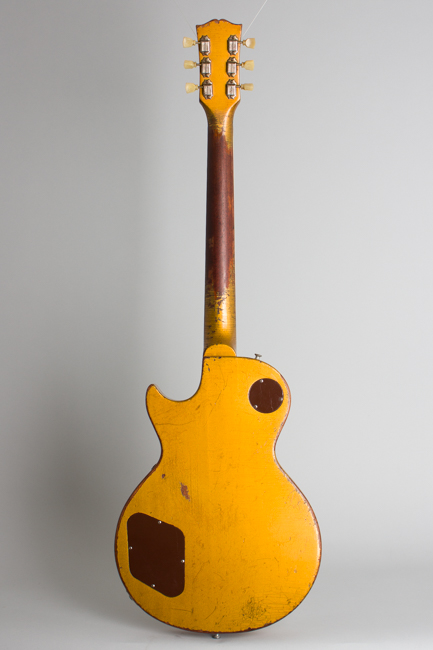 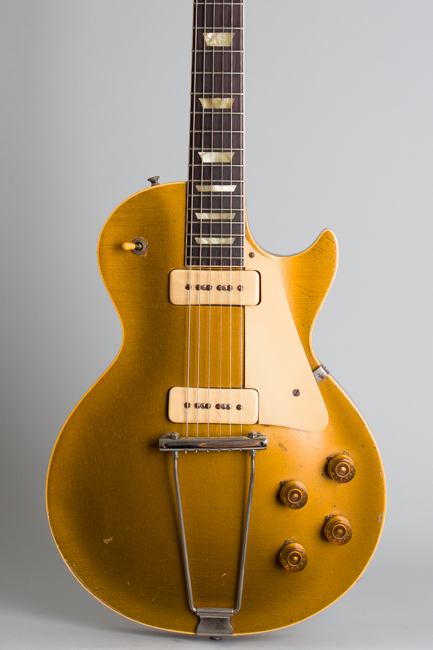 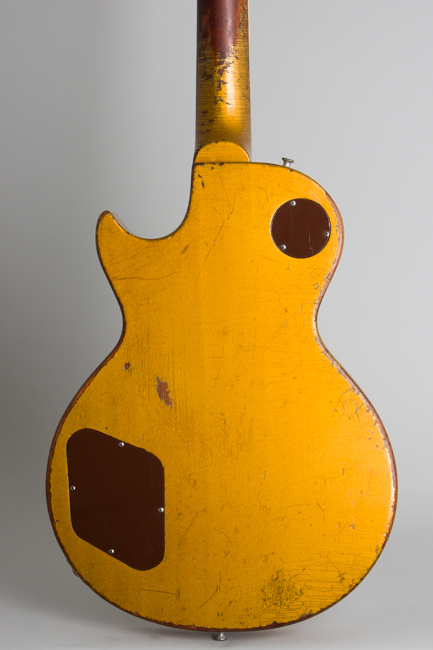 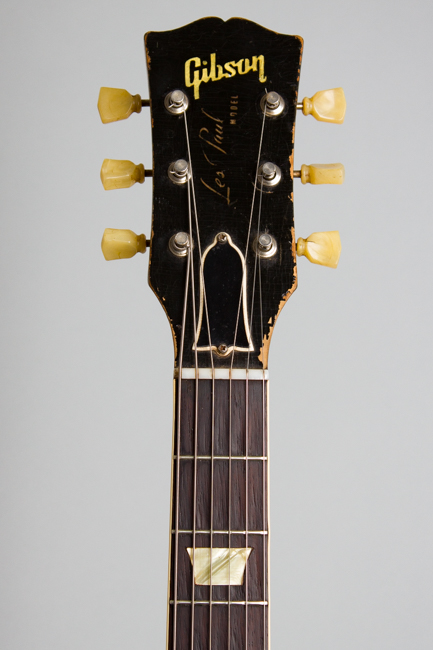 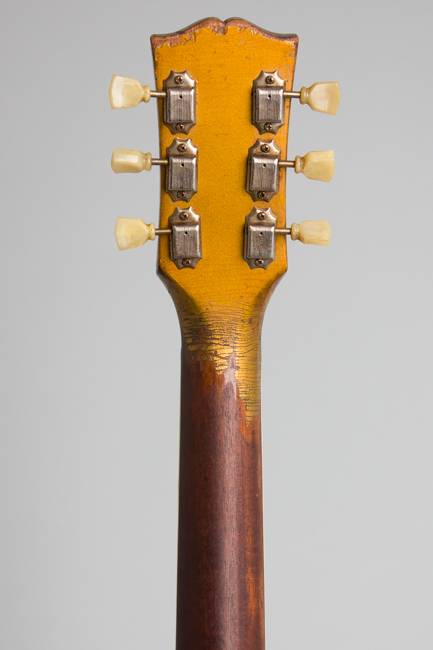 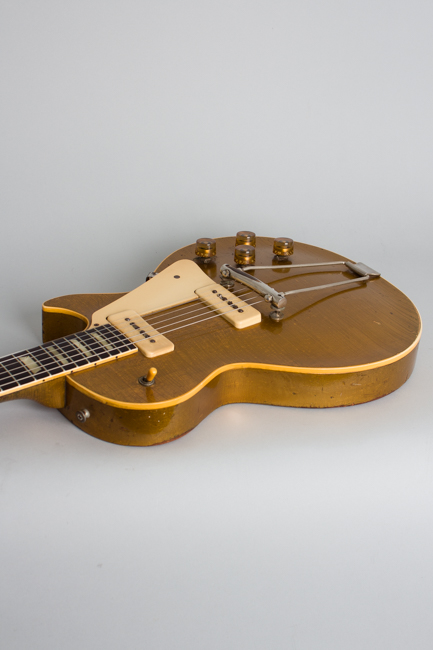 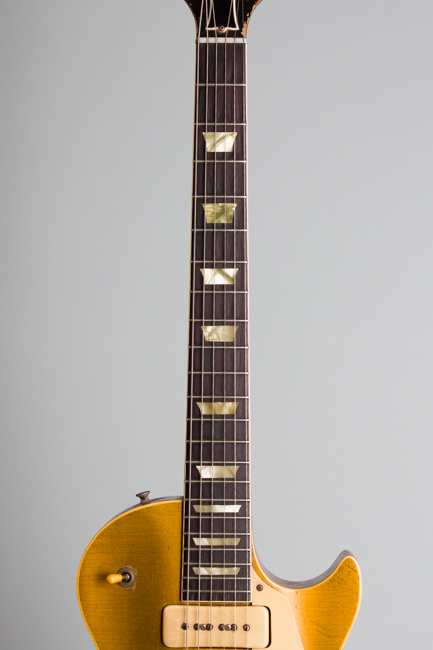 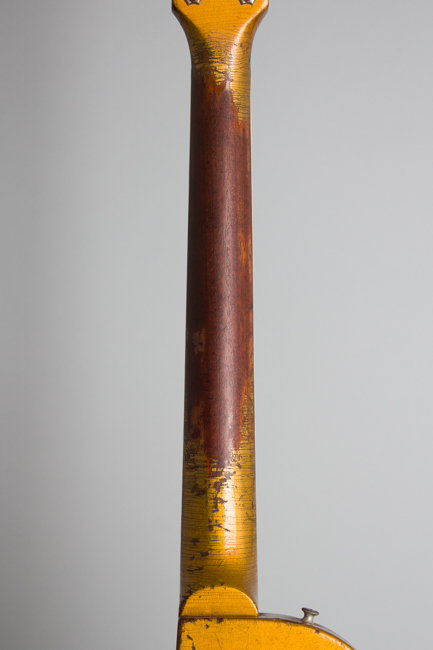 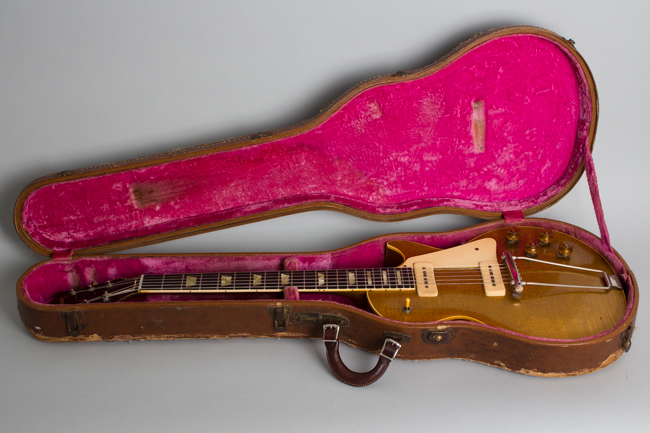 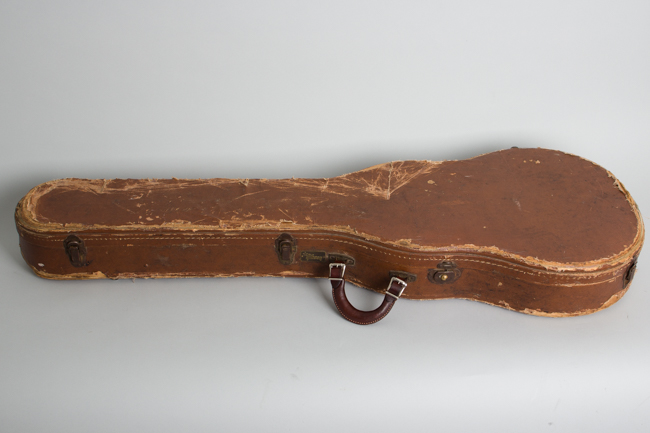 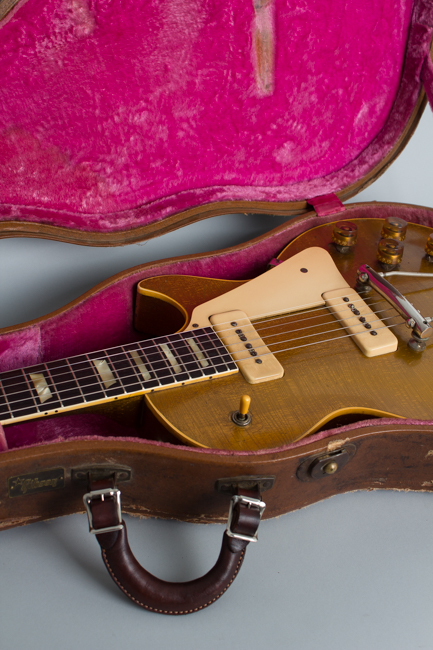 This is a well played-in but beautifully original example of one of the most important guitars in Gibson's history -- the original 1952 Les Paul Model, the company's first solidbody Spanish electric. This one dates to the first year or so of production and is an especial rarity: the unusual "all-gold" variant with the back, sides and neck finished in gold lacquer as well as the top. These all-gold Les Pauls were made in much smaller numbers than the common natural finished back and sides models, some estimates being as little as 5% of the total production.

This first iteration of this all-time classic solid-body is built with the "Les Paul" trapeze tailpiece, which consists of a solid bar suspended over the body. This is installed so the strings wrapped UNDER the bar of the trapeze unit instead of over, which Gibson engineers thought was a better solution allowing the pickups to be mounted deep into the body. Les himself disagreed, and after less than two years the design was modified to the now-familiar "stoptail" allowing easier palm-muting.

The other features of this 1952 model are mostly classic Les Paul appointments, including the bound rosewood fingerboard with pearloid trapezoid inlays, twin P-90 pickups under shallow-depth cream plastic covers with center-mount screws and Kluson Deluxe tuners with keystone-shaped buttons. In an idiosyncratic touch, the pearl Gibson logo is set lower down on the headstock than later '50s models. Gibson had not yet figured out how they wanted to serialize these new solidbody instruments, so the first year or so of Les Paul models have nothing on the back of the headstock.

The first solid-bodies with the class of a Gibson, these guitars convinced many players to lay down their electrified arch-tops and enter the new world of higher volume. Later developments of the Les Paul line included the upscale Custom, down-market Special and Junior, and reworked Standard in gold and sunburst, but this is the guitar that started it all.

While these early Les Pauls are not the favorites of subsequent players due to the eccentric bridge design these are historically very important guitars, and sound fantastic. Many players at the time including Sister Rosetta Tharpe, John Lee Hooker and Muddy Waters made great use of them when new, regardless of the bridge design. This early all-gold example has been heavily played but never repaired or modified, and is a fantastic piece of Gibson history with a killer vibe.

This almost 70 year old Les Paul shows a goodly amount of use and play wear but no major damage or repair. It remains all original except for the fragile cream plastic jackplate which is the correct part but appears somewhat more recent. The gold lacquer finish has no overspray anywhere; it shows checking overall, numerous dings, dents and scrapes but less heavy play wear to the top than many. There are a number of dings into or through the top finish but less arm wear and "greening" than some across the upper edge, where heavier loss often occurs. There is chipping around the switch base where the gold is flaked off. The back has dings, scrapes and heavier buckle wear into the lacquer but only one fairly small spot worn through to the wood, the back edges are fairly heavily worn.

The back of the neck has most of the finish worn down to the wood; this is typical of all-gold Gibson necks as the finish tends to react to the players hand usually turning greenish and often flaking off. This neck may have been lightly sanded long ago to smooth the surface but the contour is not affected. The headstock shows some chipping and flaking to the front and back edges, with the upper back edge worn down most noticeably.

The hardware shows some general wear but everything is intact and fully functional. The tailpiece bar is worn down with some platting loss from hand contact and the adjusting nuts have some chatter marks from use. The thin pickup covers have some top wear and darkening to the plastic but no cracking. Internally all wiring is original and unaltered, with the original large wax capacitors still functional.

The original narrow frets are still intact; they show moderate wear but there is very little divoting to the rosewood fingerboard. The guitar is still quite playable with a really superb sound. When all-time classic solidbodies are discussed, these first gold-top 1952-3 Les Pauls are often discounted due to the bridge design, but if approached on their own merits are still excellent instruments, albeit ones that a player has to adapt their technique to.

This all-gold beauty is housed in the original period Lifton brown case that is very heavily worn, with some material missing from the underside ends but overall is still functionally intact. This guitar and case have definitely had some adventures over the past (just about) seven decades; we don't know where it has been but just from the vibe it gives off it must have been a glorious time. Overall Very Good + Condition.
×