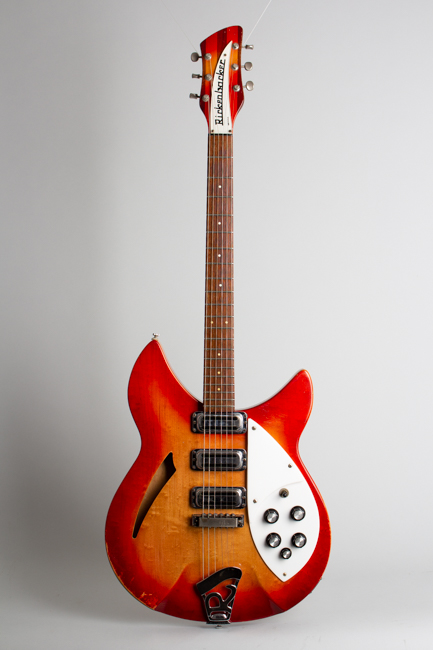 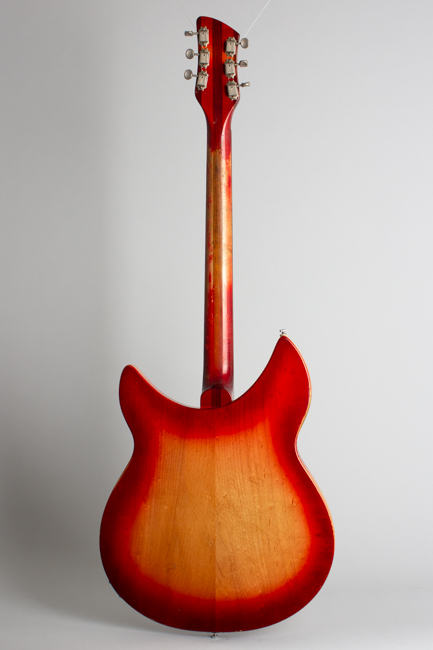 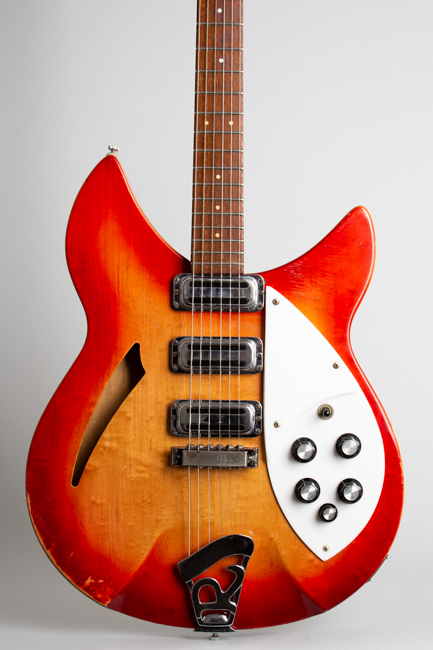 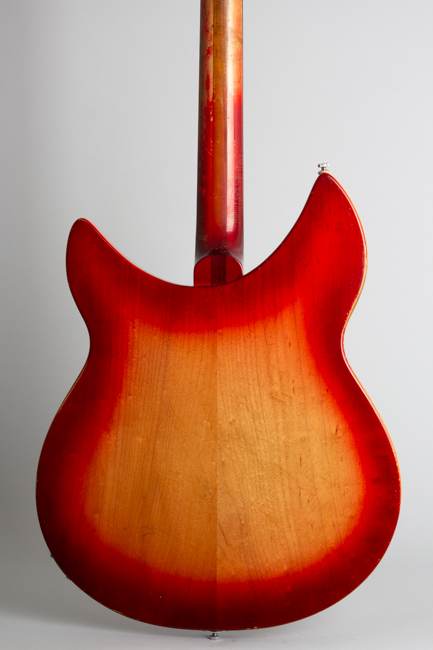 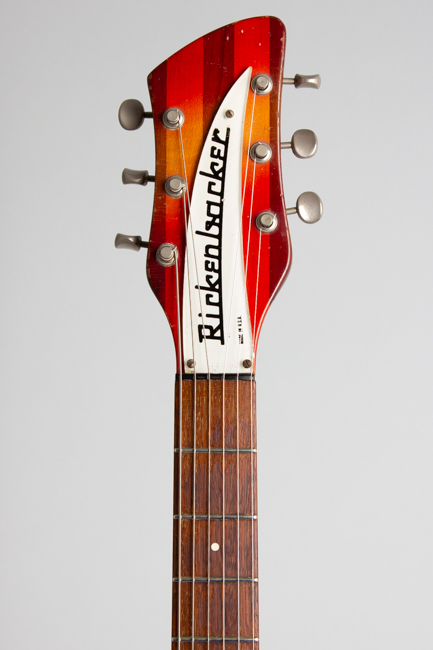 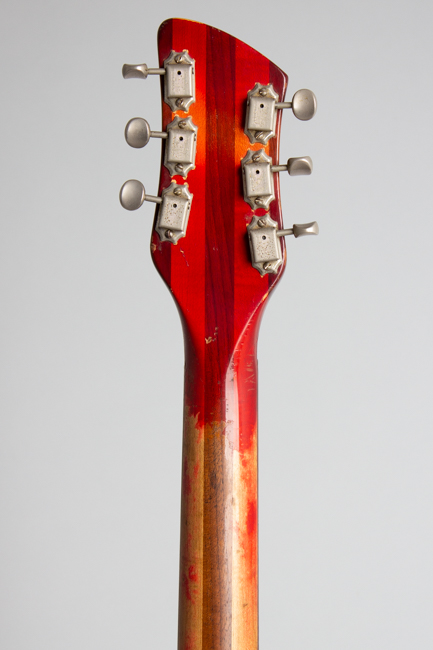 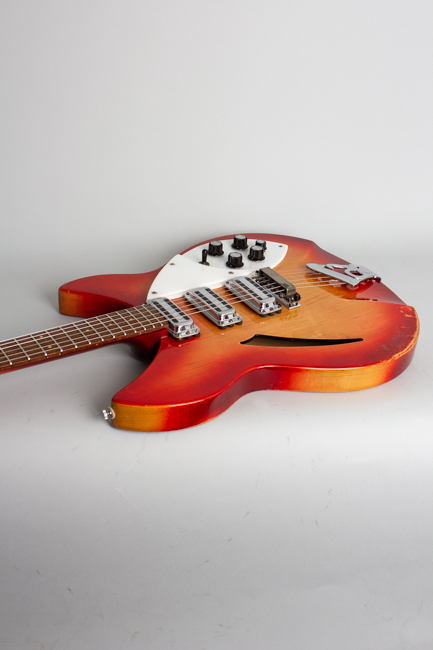 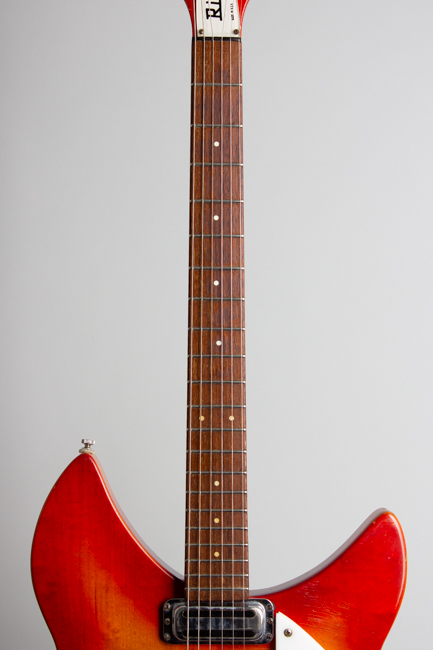 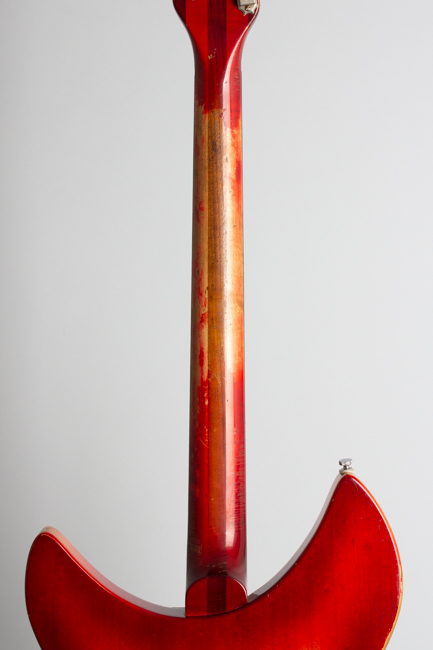 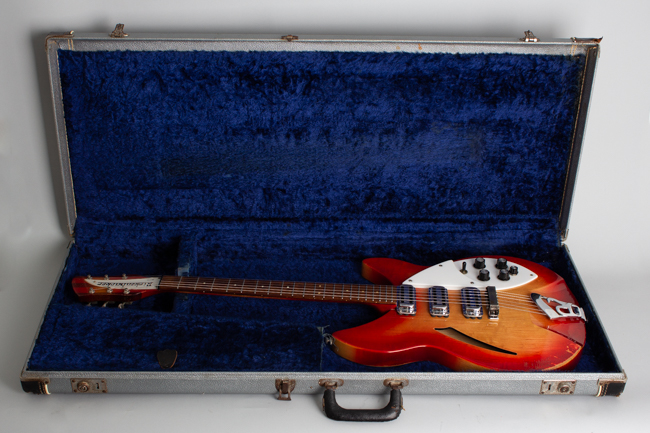 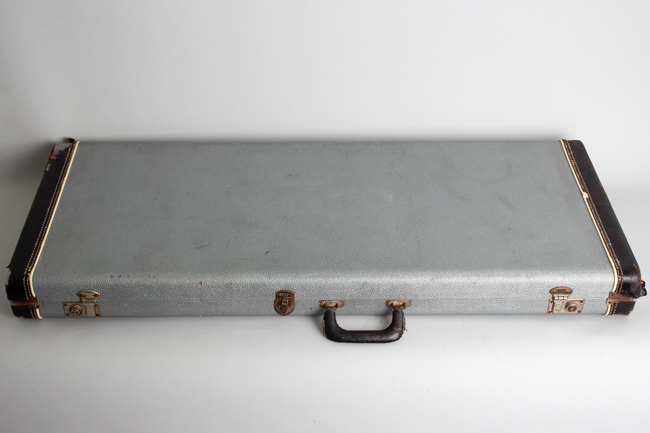 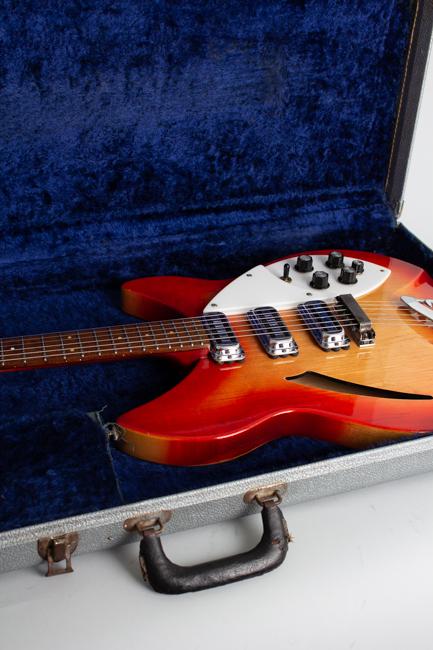 One of the most instantly recognizable of all 1960s guitars, the Rickenbacker "300" series of thin hollow-bodies have returned to favor again and again as new generations discover their bright, well-defined sound and utterly distinctive look and feel. These sleek California hot rods have been the mainstay of Rickenbacker's guitar line from the late 1950s to now, virtually icons of the 1960s synonymous with the music and sounds of that era (as well as more recent styles). They remain one of the sharpest-looking and most distinctive sounding of all vintage designs.

This example is a fairly rare variant, a "Fireglo" (red sunburst finish) Model 340 from Rickenbacker's peak year of 1966. The 340 designation means the instrument is fitted with three of the company's famous "toaster" pickups but no vibrato unit, a fairly unusual combination. The 340 was made in far smaller numbers than its two-pickup and/or vibrato equipped siblings.

This Model 340 dates to December 1966 and is in well used but great-playing condition. It has what Rickenbacker termed "standard" features; The flat-topped carved maple body is unbound, with a "cat's-eye' soundhole on the face. The laminated maple/walnut neck has an unbound lacquered padauk fingerboard with small dot inlay. The headstock is fitted with Kluson Deluxe tuning keys and the trademark white Rickenbacker logo headplate. All external hardware is original and intact, including the bi-level white pickguards, 6-saddle adjustable bridge, the oft-missing bridge cover and distinctive "R" tailpiece.

The three "toaster top" pickups are mated to a 5-knob wiring rig; this guitar has been rewired to a novel scheme allowing maximum blending flexibility. While we usually prefer to restore instruments to original, this guitar actually has a much more useful electronic layout than the stock Rickenbacker design. The pickups, knobs and switch are original; the pots are later replacements. The guitar is wired as a conventional two-pickup instrument, with the third pickup independently controlled by the fifth knob acting as a dedicated volume control. This means any pickup combination can be achieved, allowing a wide range of tonal choices. The original Rickenbacker system tied two of the pickups together and offered only a fraction of the possible combinations.

The most famous 330 series Rickenbacker guitar would be John Lennon's 1964 Model 325 during the Beatles peak of fame. Following this lead, many young musicians in the 1964-68 era chose thinline Rickenbacker guitars making them an enduring 6-string symbol of the period. The models 335 and 345 are most firmly associated with the early Who; the group's first records are an absolute showpiece for the unique Rickenbacker sound.

This 340 in the trademark "Fireglo" sunburst finish is simply an iconic Rickenbacker model, in a rare and especially cool variant. We believe ALL Rickenbackers should have three pickups; it just looks cooler (Roger McGuinn says so!) and in this case is quite sonically useful as well. Despite sometimes being dismissed with a "1960s cliche'" tag, these Rickenbackers are more versatile guitars than many realize; great-sounding and very classy instruments for both retro and modern sounds!

This original 340 shows some moderately heavy playing wear but no damage or structural issues; it looks to have been someone's gigging guitar for some time. It remains original except for a very nicely done refret and the wiring re-work noted above. The neck angle is unusually good for an early Rickenbacker; playability is excellent and there is plenty of room to adjust the bridge either way which is often not the case with these.

The original finish shows considerable play wear overall, with some checking on the top and dings, scuffing and dents overall. The body edges and armwear spot on the top show some wear down to the wood, and there are belt buckle marks into but not through the lacquer on the back. The back of the neck is heavily worn down and actually feels great, there is a lot of wear to the lacquered fingerboard as well. The frets are just slightly larger than the original wire and are very well done, quite in character with the guitar.

This may not be the cleanest 1960s Rickenbacker we have had, but is certainly one of the best players. The altered wiring is a most useful feature, allowing a very wide range of sonic choices not available with the standard scheme. This super vibey guitar still resides in the original silver Tolex HSC which is worn somewhat but completely solid. Very Good + Condition.
×