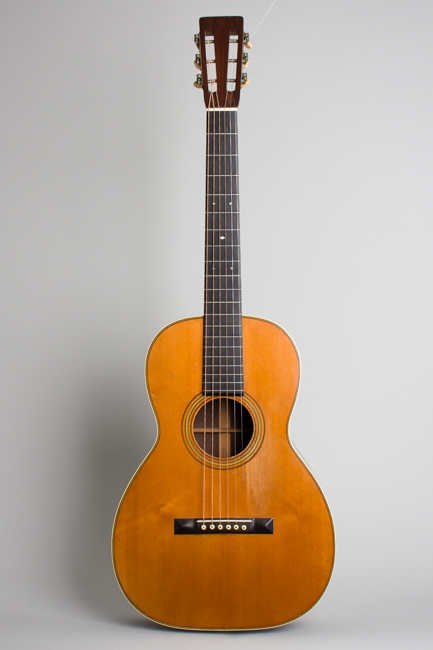 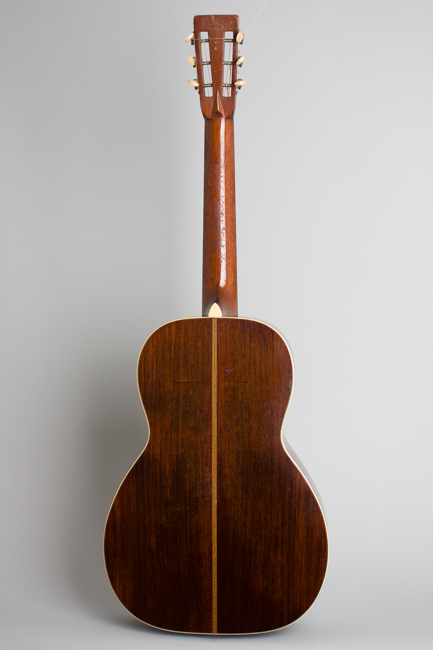 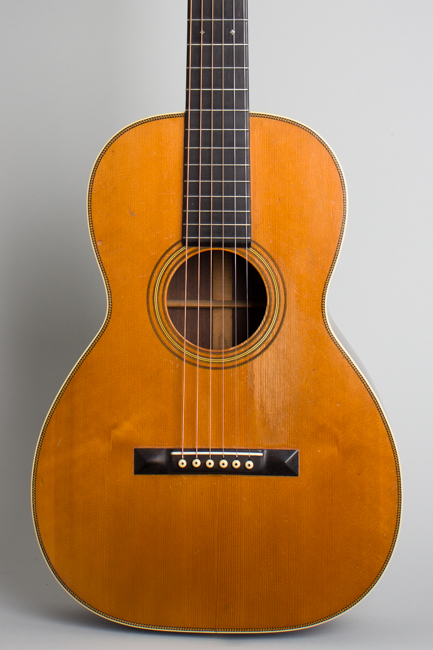 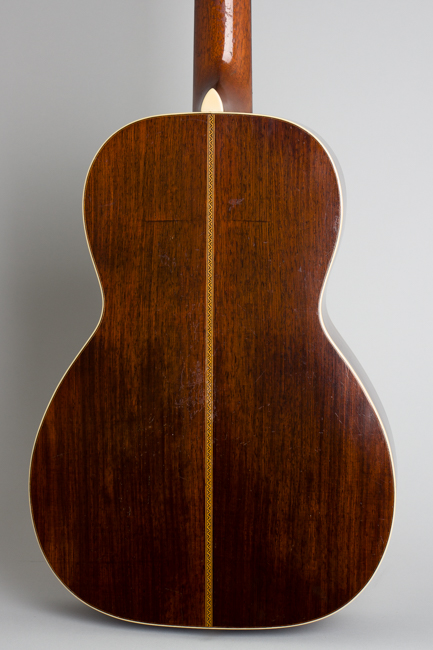 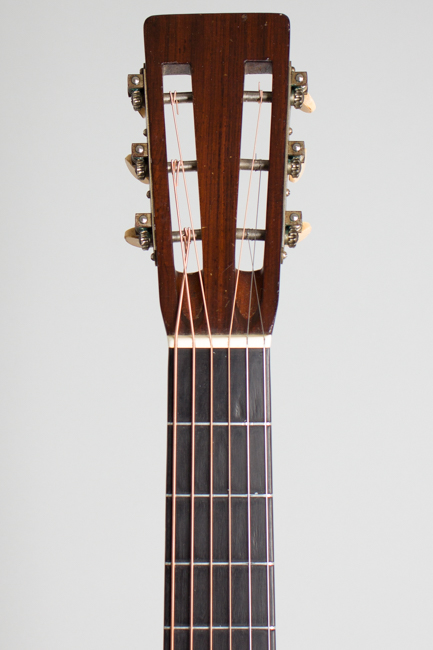 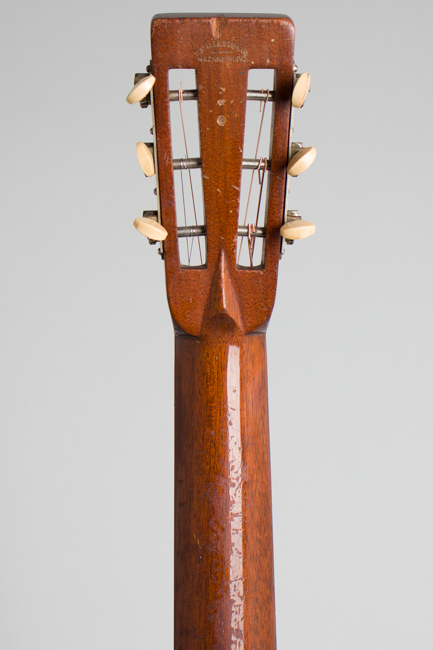 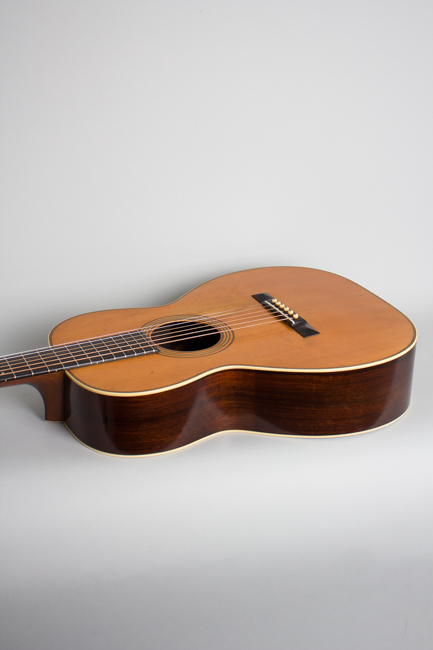 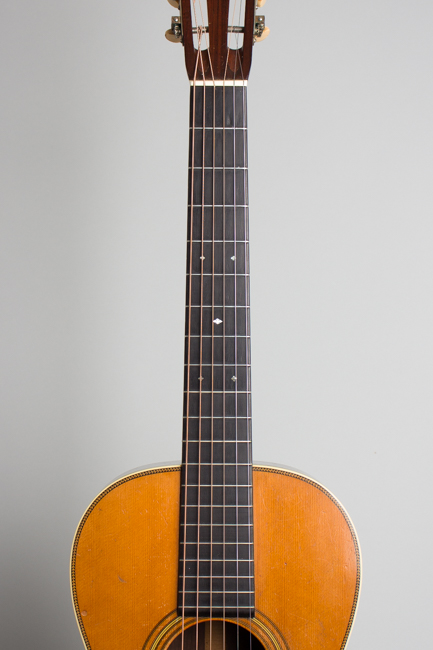 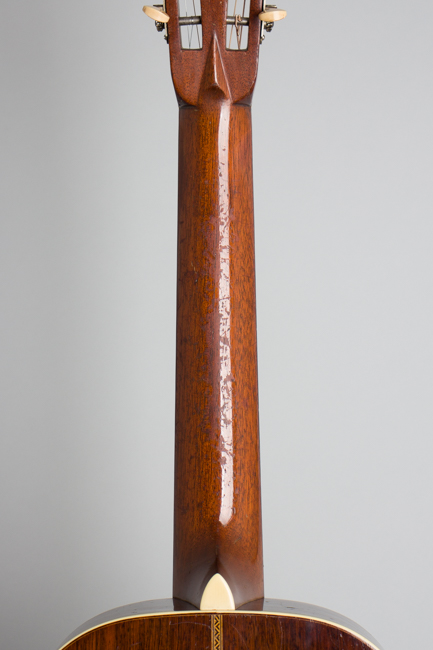 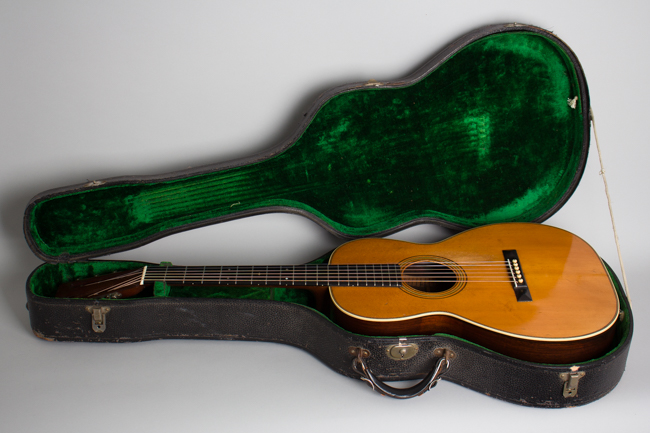 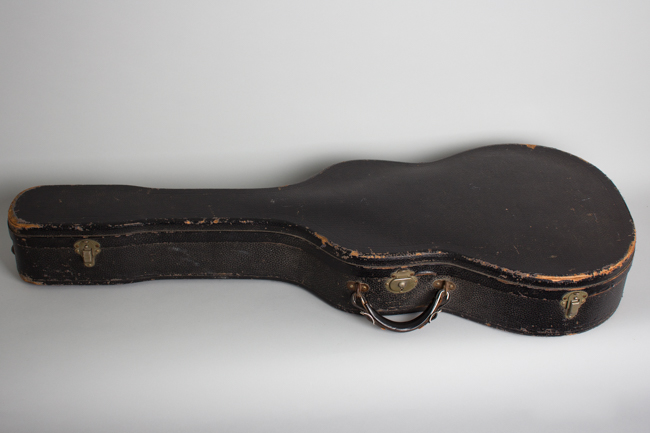 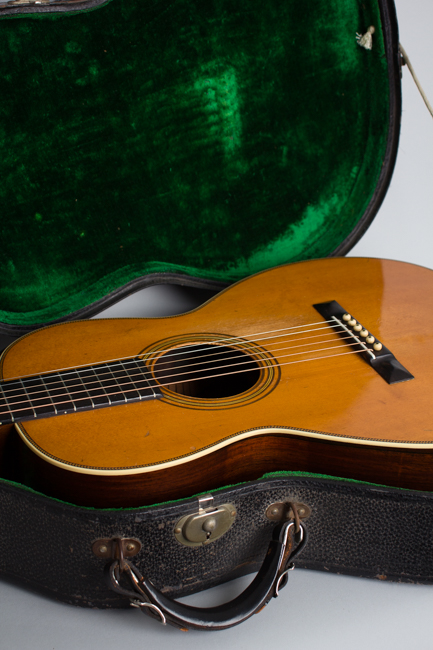 This lovely instrument is a Martin Style 0-28 guitar built in early 1927 in solidly original condition, with some general wear and expert repair. Only 124 of this model were shipped that year, and many that survive are no longer in anything like this original condition. The 12-fret Martin guitars of this period are far more lightly built than later models, and many have succumbed to age and heavy use after nearly 95 or so years.

In 1927 the 0-28 was priced at $75 (without the case), a considerable sum at the time. The model has these specifications: a 13 1/2" wide body made of close-grained Brazilian rosewood with an Adirondack spruce top braced in a scalloped X pattern. The top is bound with ivoroid and trimmed with herringbone pattern wood marquetry that is a longstanding Martin trademark. The back is ivoroid bound and has a zipper pattern marquetry backstrip. The small pyramid bridge is very high-grade dark ebony with ivoroid pins.

The neck is mahogany with an ebony fingerboard, fitted with original bar frets and inlaid with small slotted diamond position markers. The slotted headstock is faced in rosewood and carries engraved Waverly strip tuners with ivoroid buttons. The C.F. Martin stamp is visible on the back of the headstock and inside the body on the backstrip. This model would be built in this form until the advent of 14-fret neck joints, pickguards, and belly bridges in the early 1930s. Instruments of this type and period are relatively scarce in good playable condition in steel string format, which was only becoming common in the mid-1920s. Before that time Martin's rosewood guitars were still built as gut-strung unless specially ordered for steel.

This small-bodied Martin is not pristine, but remains in better condition than many of this period and an exceptionally fine playing and sounding 12-fret steel-string guitar. Although priced around the middle of the company the line the 0-28 was still more expensive than most 1920s guitars, and always built to the lofty standards that only C.F. Martin ever sustained. This 0-28 is similar to the one seminal country picker Sam McGee played for much of his early career, and is a superb instrument for not only old time country but really any style of play.

This 0-28 shows some noticeable play wear and well-executed repair work but remains a superb playing instrument in substantially original condition. There is noticeable playing wear to the top, with an area worn through the finish and in to the wood\. This is heaviest in the area where Martin would place a pickguard only a few years after this guitar was made, but visible also on the treble side of the soundhole rosette. There are pick marks, scuffs, scratches and press marks throughout the top.

The rest of the finish shows surface wear, with dings, dents and scratches throughout. There is an area of buckle rash at the center of the back, a short tightly sealed grain crack next to the zipper stripe near the neck block also on the back, and an area with three slight dents on the bass side rim next to the heel. The back of the neck shows light capo marks and is somewhat randomly worn through the finish in areas up to the tenth fret.

The guitar has had a very clean neckset and is set up for optimum playability. The original bridge has been reglued and the area around the bridge reveals only the slightest evidence of the work. It has been shaved slightly, more so on the treble side and a new bone saddle has been fabricated. Internally the guitar is original and unaltered including the delicate scalloped braces and the original very small maple bridgeplate. The original bar frets show light wear and have plenty of life left.

Unusually for a Martin of this vintage the guitar has only one small repaired back crack; many have had substantial crack issues over the years. In addition it retains its original finish, without the all-to-common overspray and touch up older Martins often accumulate over nearly 100 years. This 0-28 is in excellent playing order, with a huge and powerful sound most players simply do not expect from this relatively small-bodied instrument. Truly an exceptional old-time guitar and a gem for any playing style, ready to go. The very rare original green plush lined hard case is included, it is in decent condition overall but the hinges are not functional so a modern HSC will be included as well. Overall Excellent - Condition.
×