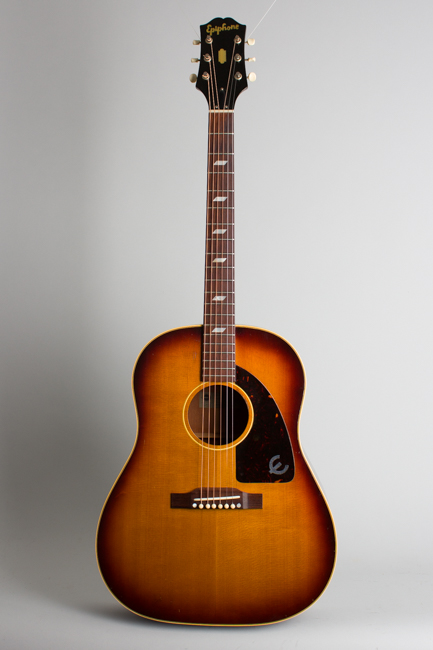 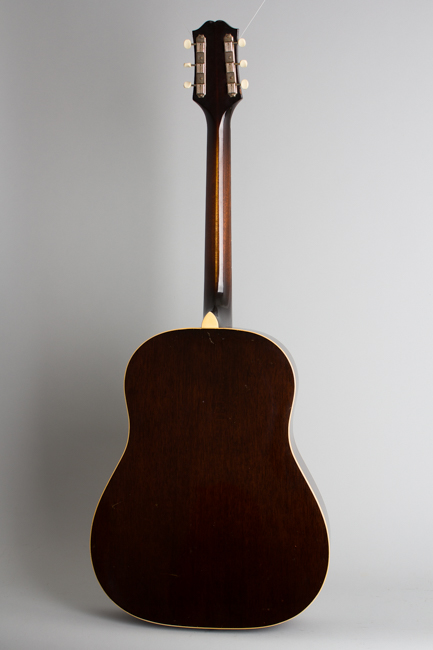 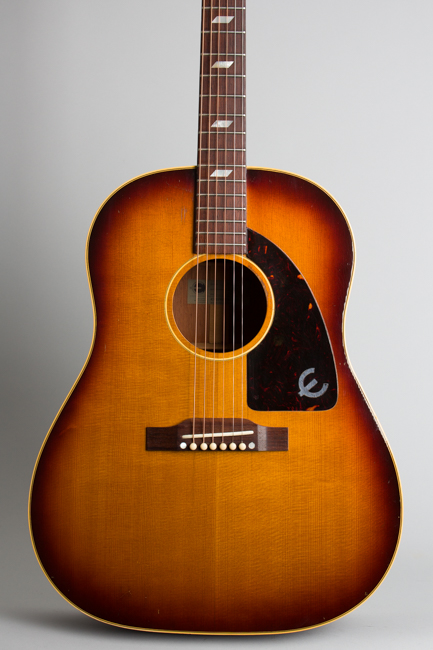 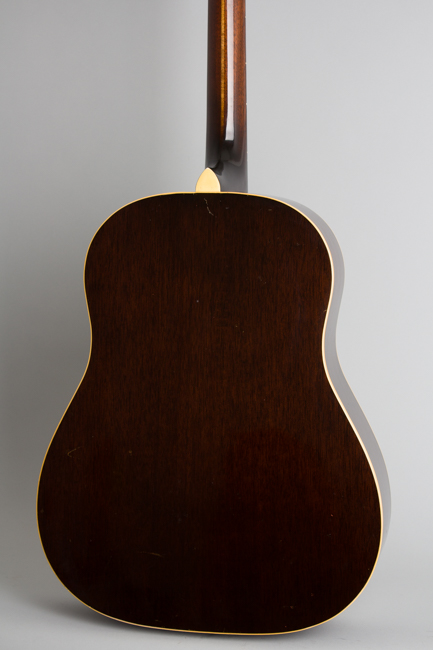 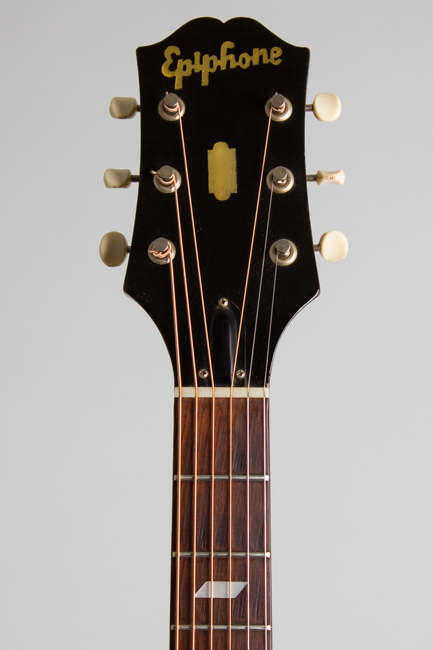 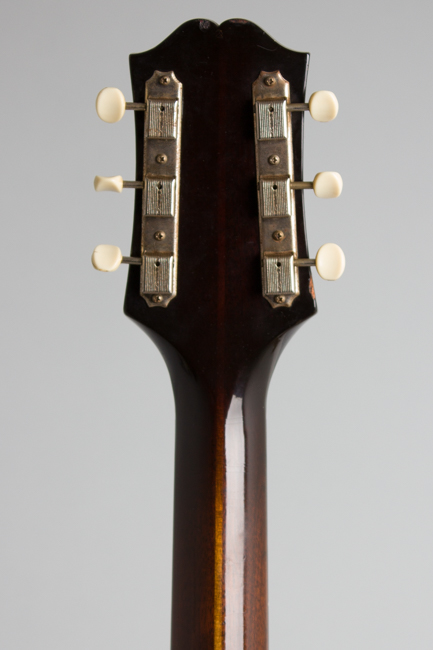 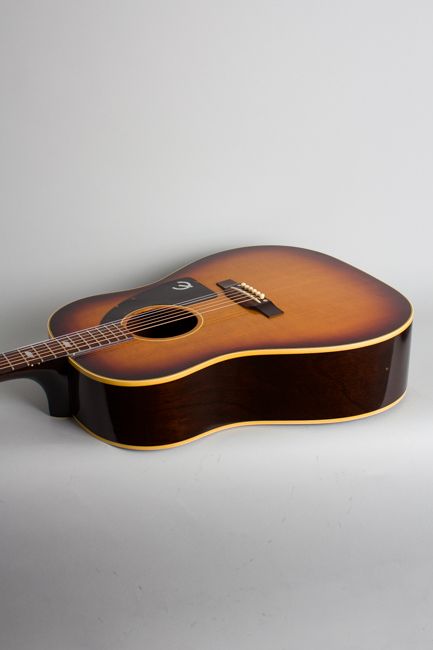 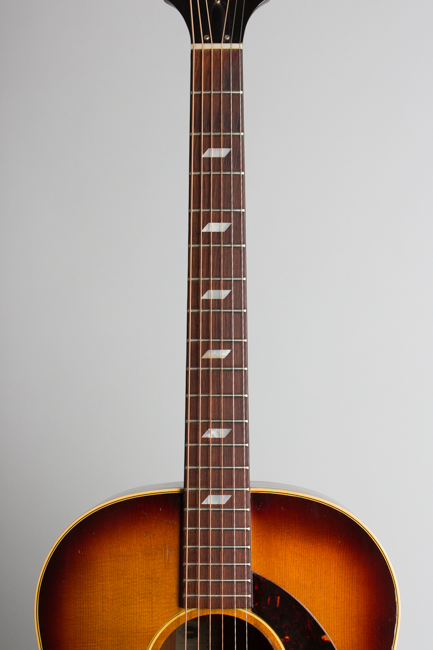 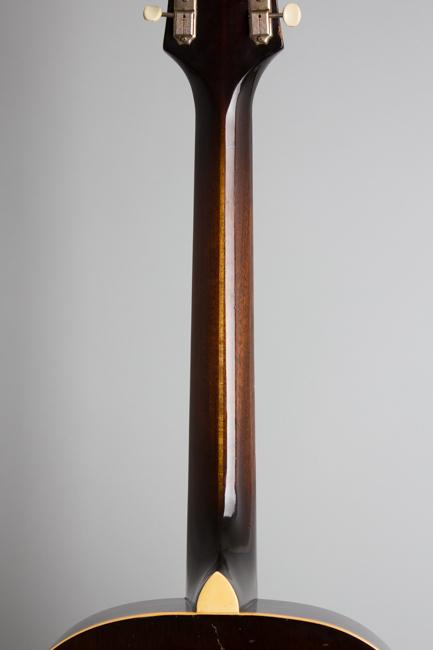 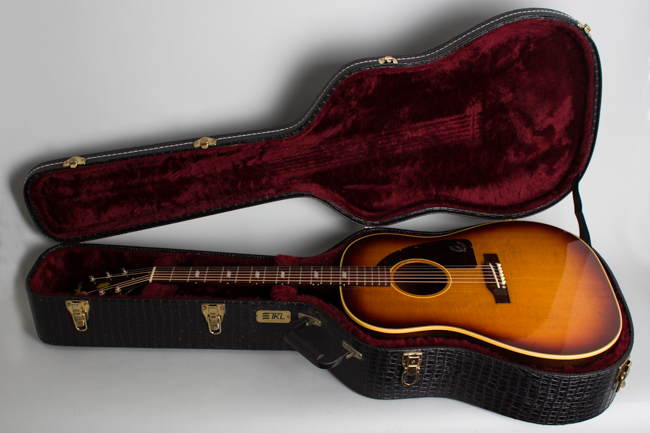 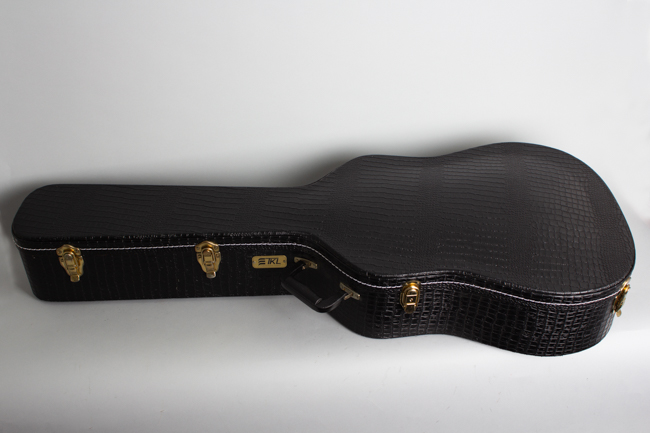 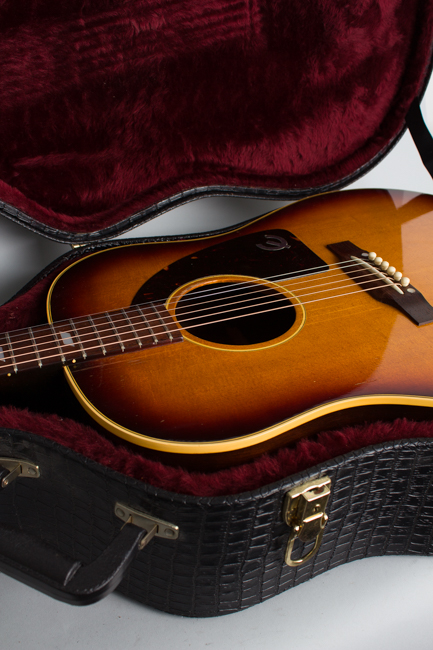 The "Guitar of Yesterday"! The Epiphone Texan will forever be remembered as Paul McCartney's 1960's instrument of choice for writing, recording and performing that particular tune, and many others besides. Apart from this indelible Beatle connection the Texan is one of Gibson's more interesting post-war flat tops, the 1960's Epi-logo version of the Gibson J-45/50 but with a longer scale which gives it a different feel and correspondingly tighter, more powerful sound.

After Gibson's parent company Chicago Musical Instruments bought the basically defunct Epiphone operation in 1957, it took them a year or so to come up with a new guitar line using the former competitor's name. Samples were shown at the NAMM show in 1958 but production only began in earnest for the 1959 model year. This particular Texan is a rare variation, the earliest 1959 version that predates the actual "Beatle" guitar by some years and was built with some leftover Epiphone New York components.

The FT-79 Texan shared the body of Gibson's popular J-45/J-50 round-shouldered flat top, with a proprietary Epiphone neck and slightly different pickguard. This guitar's primary difference from 1960s Texans is the use of an original Epiphone NY neck blank, a stock of which was included with CMI's purchase of the company. This is made of a 3-strip mahogany/maple laminate with a slim, somewhat "V" shaped profile quite unlike period Gibson necks and a sharply pointed heel with a celluloid cap.

The wide headstock has the Epiphone name inlaid at the top in heavy pearl script and a small metal truss rod cover differently shaped from Gibson's. The unbound rosewood fingerboard has trapezoid block inlay. The top is finished in a dark sunburst, more Gibson-like than the lighter bursts typically seen on Epiphones from the 1960s. It carries a standard Gibson top-belly rosewood bridge and a tortoise celluloid pickguard smaller than the Gibson fitting from 1959, with an epsilon "E" at the lower corner. The top is triple bound with a 3-ply soundhole ring, while the back is single bound.

This is a very fine sounding guitar that definitely ranks with Gibson's finest 1950's flat top creations. It is also a relatively rare instrument, with only 193 shipped in 1959 followed by another 125 in 1960. This guitar's early A-series serial number puts it at the juncture of those two years; probably built in the former and shipped in the latter. It has survived in amazingly beautiful condition, a great playing and sounding instrument that has remained almost perfectly original, albeit in a newer case.

This is a wonderfully well preserved example of this Gibson/Epiphone rarity, showing some minor wear but all original and extremely clean for a 60+ year old instrument. The finish shows the light typical checking, mostly to the top and some typical small dings and scrapes overall. The largest areas of loss to the finish are a few pick scrapes on the top just above the fingerboard, a small dent to the upper back and some wear into the wood on the lower soundhole rim. A few dings and dents to the back and sides have been neatly (and discreetly) touched up. The rest of the finish is quite clean with the original sheen still intact and there is no sign of the common areas of pickwear to the top.

There is a tiny grain split to the spruce top in the typical spot just off the back edge of the pickguard; this does not go through the top and is not visible from the inside. Likewise two small check lines off the back edge of the bridge and a visible line on the top center seam do not go through the wood to the interior of the guitar. There are no structural cracks and the top shows only minimal bellying behind the bridge. This is at least partially due to a beneficial construction quirk: the bridgeplate on these early Texans is properly situated under the pins, unlike many 60's models where it is misplaced too far forward when an already fabricated J-45 body was used, originally intended for Gibson's shorter-scale neck.

The guitar retains all original fittings with no alterations-not even the typical strap button added to the heel. The original bridge has a newer arched bone saddle but has never been cut down; it was likely re-glued, as the retaining bolts and screws once hidden under the pearl dots are not present. The neck has never been reset, nor needed to be. This is a truly excellent playing and sounding guitar and a super nice example of the rare first generation Texan with a ringing, powerful but still sweet sound. It offers a unique feel, the product of its mixed New York and Kalamazoo parentage. Excellent + Condition.
×