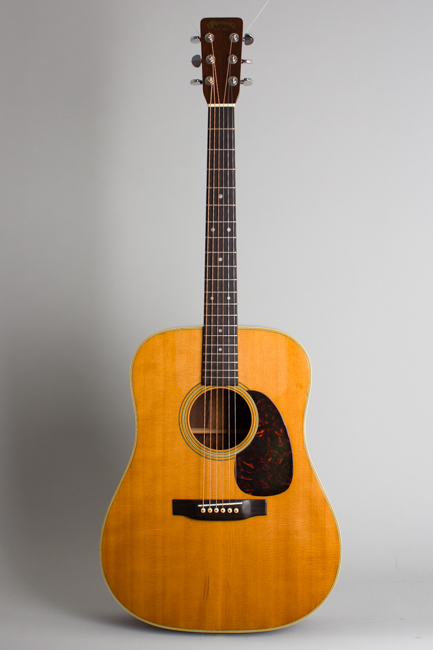 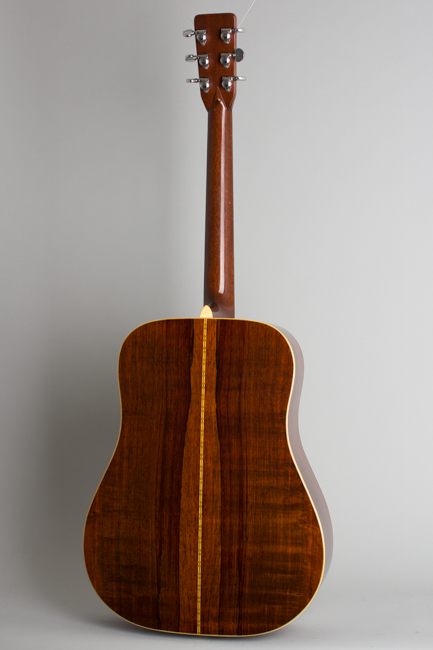 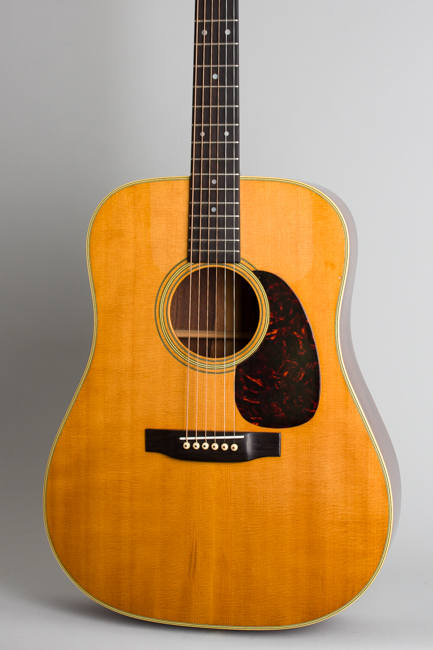 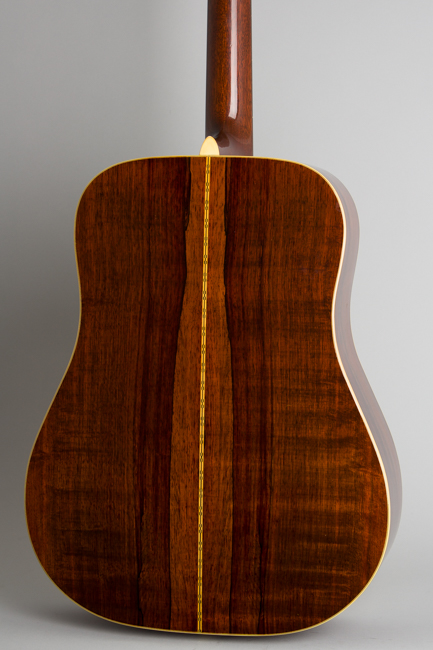 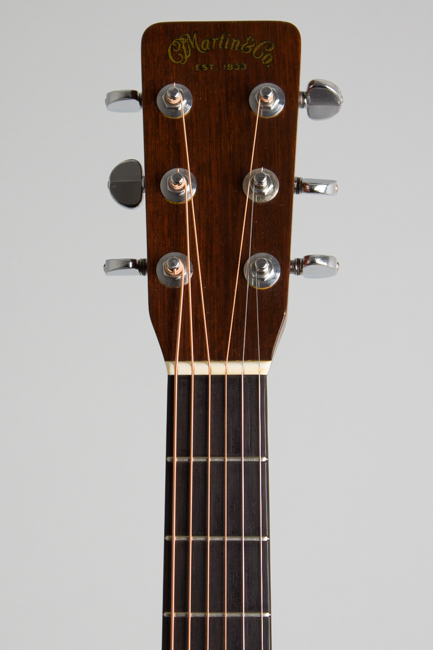 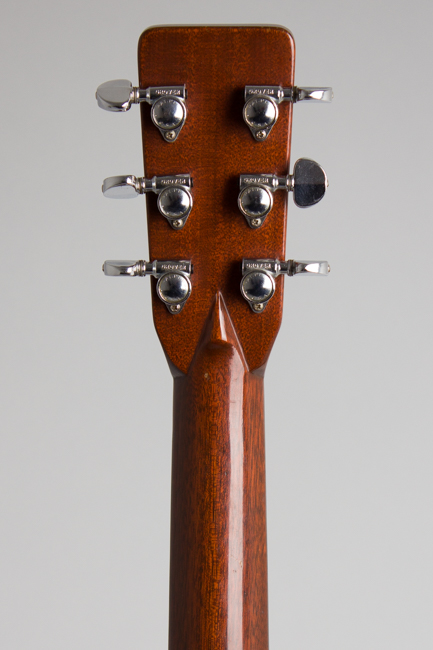 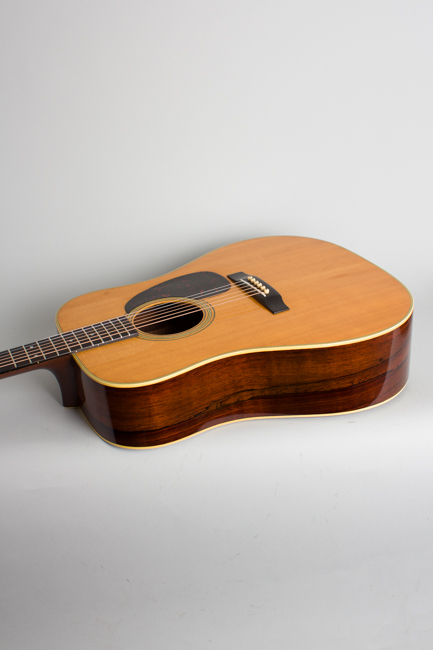 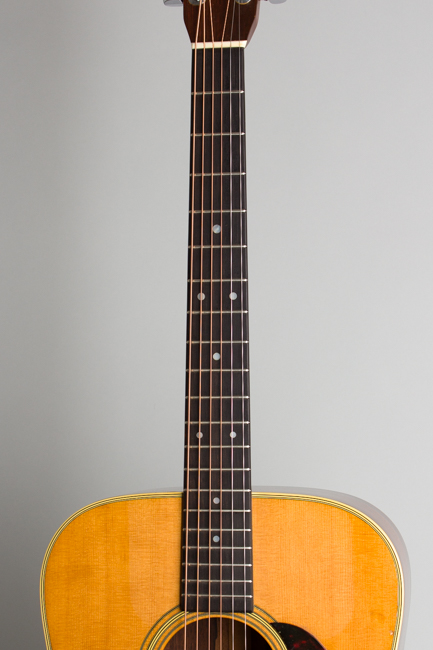 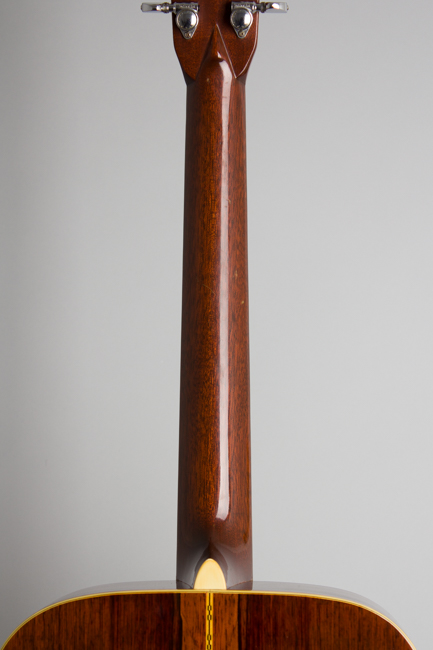 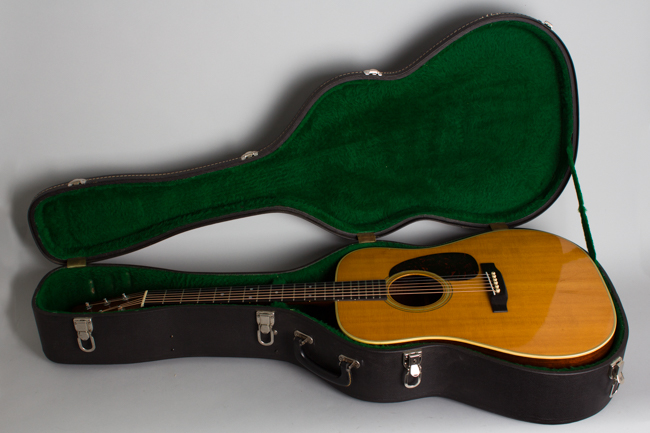 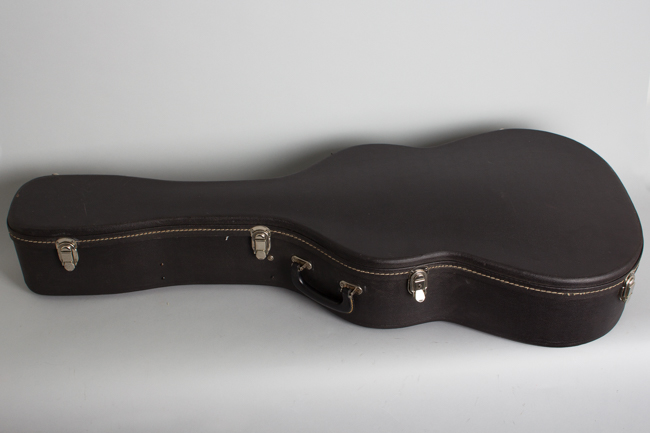 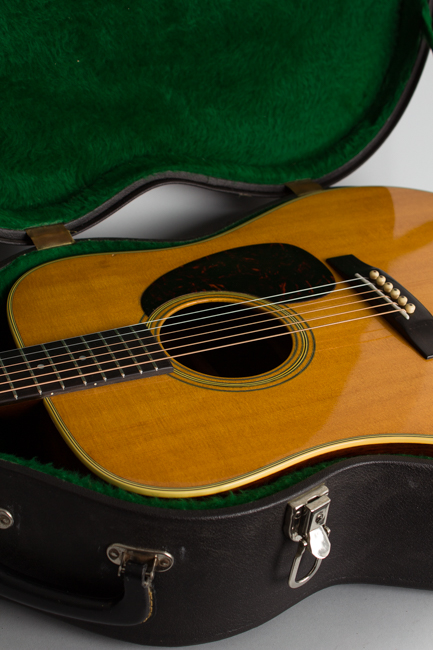 This is an overall nice clean example of a "guitar boom" period Martin D-28, increasingly hard to find in this sort of lightly played condition as the decades roll on. Many of the older '60's features are still intact, which would change moving towards the 1970's. This one is mostly original with some neatly done repairs from 1982; the craftsman who worked on it initialed and dated his work.

The nicely-aged ambered spruce top has the older style tortoise shell celluloid pickguard and 6-layer celluloid binding around the edge. The bridge is an ebony replacement, a good if slightly rounder-edged repro of the mid-60s short-saddle ebony bridge. The bridgeplate is still the older style small maple piece, in this case with a thin maple re-inforcement added 40 years ago. The beautifully grained Brazilian rosewood back and sides have some very prominent figuring, rather fancier to modern eyes than the very straight even grain Martin traditionally preferred. This is most striking on either side of the classic chain-link pattern back strip.

The unbound ebony fretboard has large mother of pearl dot markers graduating in size. The headstock shows the rounded-corners typical of this era (when Martin's shaping templates having become very worn from use) and carries original PAT. PEND. Grover Rotomatic tuners. Martin built 928 D-28's in 1965; the output of this popular model virtually doubled the following year. In the coming years up through the mid-70s this figure would go up exponentially. Although built in Martin's then-new larger factory this guitar retains the older handmade feel that would increasingly become obscured as the decade turned.

This is a relatively clean guitar overall, showing some minor wear and discreet repair but on the whole a nicely preserved mid-1960's Brazilian rosewood Dreadnought. The finish has minimal checking and fairly light wear, appearing not too much played over 56 years. The top has one larger dent near the upper bout treble side waist, with a smaller deep ding beside it. The lower area of the top behind the bridge has a couple of deeper narrow scrapes; apart from these marks there is only very light play and handling wear on the instrument.

There is one small typical pickguard crack visible at the guard's top edge, neatly sealed with a small spruce patch underneath. Internally the guitar is very clean, as noted the original small maple bridgeplate has a thin maple cap added and the ebony bridge is an older short-saddle replacement. This work is initialed "G.M.S. KC Mo 4-14-82" in two spots inside. The neck looks to have been reset some time ago, possibly in the same time frame; it is a neat job with one small patch on the treble side of the heel and some very discreet overspray to the top on either side of the fingerboard, really only visible under blacklight.

This is a very good playing and sounding D-28, with a nice even ring and plenty of power, with more top end than some. The frets show only minimal wear and this guitar feels like it would respond well to being seriously played and open the sound up even more. Really just a cool and lovely mid '60s Martin Dreadnought, ready to go in the original green-lined HSC. Overall Excellent Condition.
×