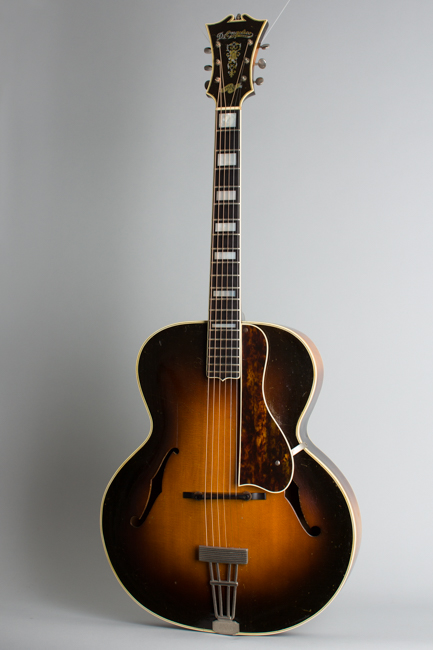 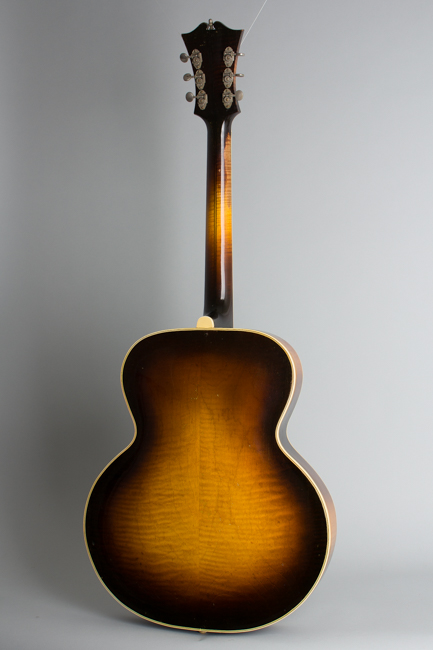 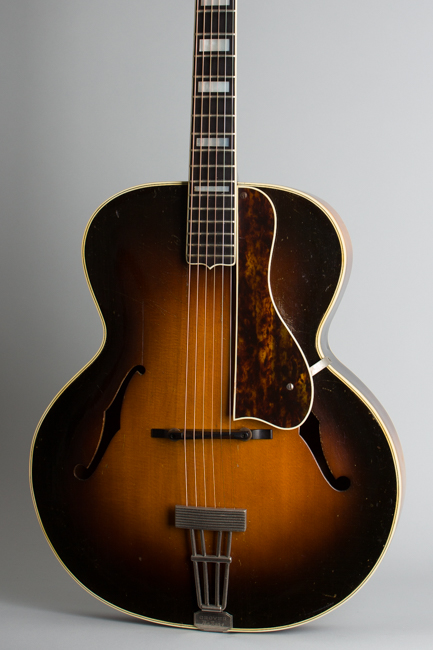 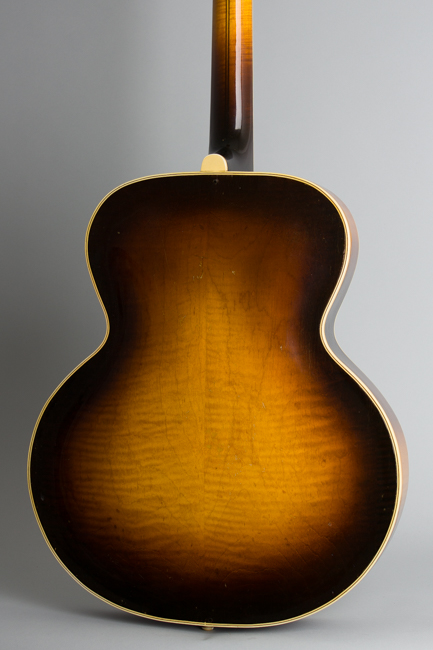 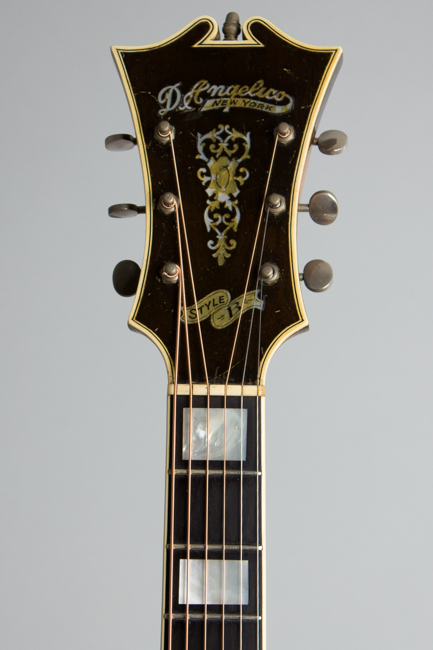 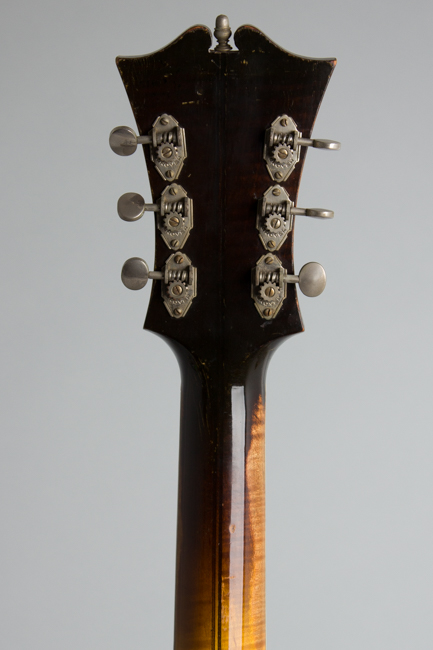 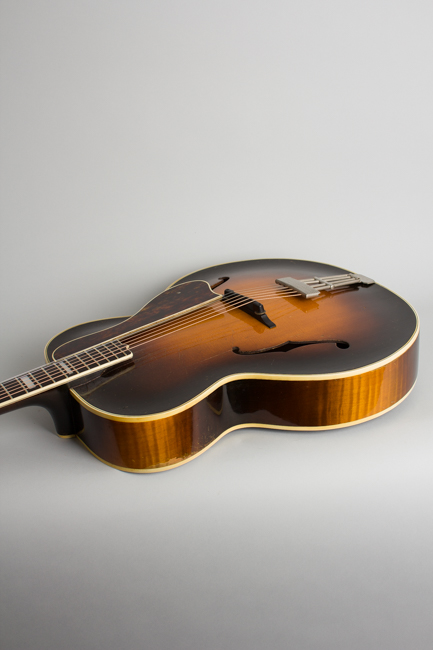 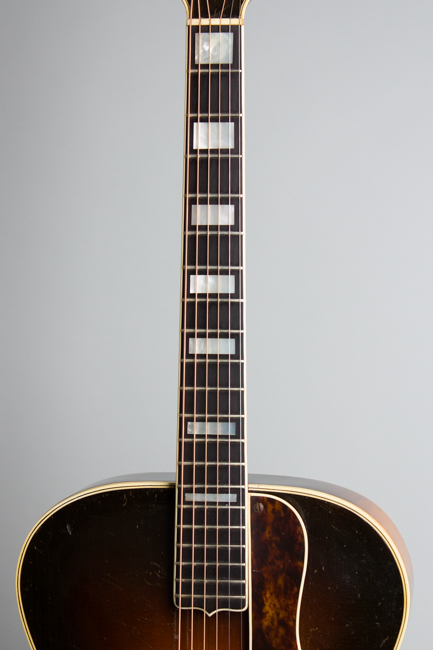 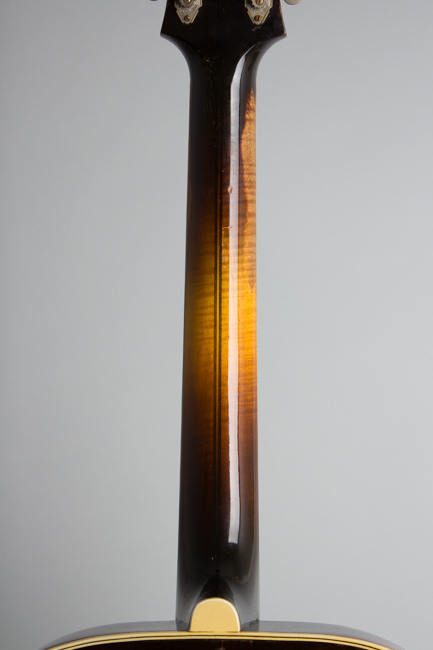 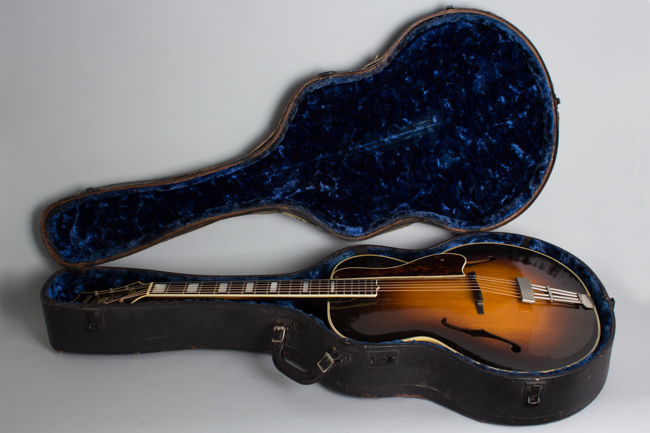 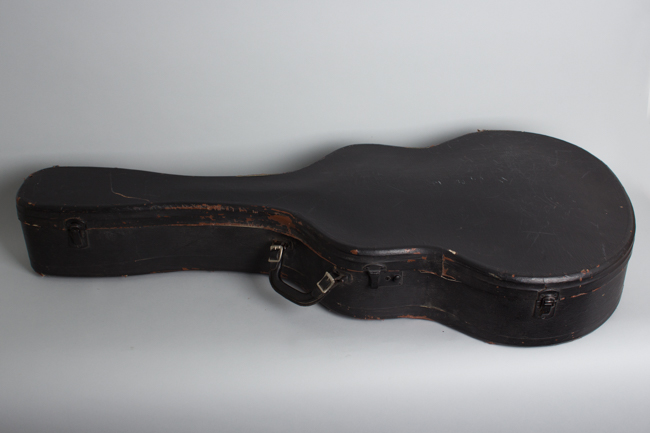 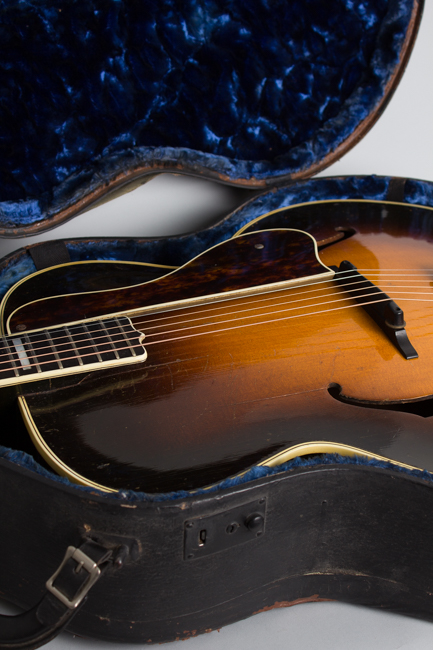 This is a lovely example of the work of the man considered the undisputed dean of arch top guitar builders, John D'Angelico. At the time this guitar was made, D'Angelico was well into developing a signature style both cosmetically and sonically. His instruments at first closely resembled Gibson's L-5, but around 1934-5 began to take on their own distinctive character both in appearance and sound. His top-of-the-line Excel model took elements from Gibson and Epiphone and combined them into his own recipe for the perfect guitar. This mid-1938 Style B was the guitar just under the Excel in his line; a professional grade guitar but not as fancy as the top-line model.

This guitar has a 17 1/8" wide body, just a bit larger than the "advanced' Gibson L-5 introduced in late 1935. Despite being originally priced $75 under the Excel, the Style B is built with the same care and top-grade materials throughout. The hand carved top is very tightly grained spruce and the back and sides are maple, with a fairly plain grain pattern. The top and back are triple-bound in wide white/black/white celluloid and finished overall in a beautiful dark blended sunburst. The top is carved relatively thin for a D'Angelico and is parallel braced, with unbound traditionally shaped f-holes.

The headstock is triple bound and carries an inlaid "D'Angelico, New York" script logo over an elaborate pearl decorative motif. John obviously outsourced this piece as it sometimes appears on older New York-made instruments, both his and others. There is a pearl banner engraved "Style B" at the base of the headstock, while at the crown is an early example of the famous signature brass finial seen on John's higher end guitars. Later Style B's would eliminate this decorative touch. The tuners are a fairly short-lived style of open back Grovers with metal buttons seen on a number of makers' instruments in this specific 1938 period.

The neck is laminated maple, with a very comfortable "C" profile and 1 11/16" nut width. It is fabricated from 5 pieces in total with triple inner layers as are most early D'Angelico necks. The fingerboard is ebony with plain pearl block inlay single bound from the top but with an added side line. While John is often described as heavily influenced by Gibson, the guitars Epi Stathopoulo's company was turning out on 14th street not too far north of D'Angelico's Kenmare street shop also had a major impact on his designs. Indeed, this Style B resembles the contemporary Epiphone Broadway more closely than anything Gibson offered. It would have been priced at the same $200 as that instrument, as well as the competing Gibson L-12.

The tailpiece was made by the Grover company of Long Island City; D'Angelico had not yet begun to have his own proprietary tailpieces made so this one is labeled "Grover DeLuxe" at the base. The bridge is simple carved ebony with an angled saddle, while the pickguard is still the curved shape used on earlier D'Angelicos, not the more angled deco styles he would move on to. Overall this guitar is somewhat fancier than some later Style B's, although the plating is nickel and not gold as was usually specified for the model.

This guitar is listed in D'Angelico's ledger as completed on 07/08/38, originally sold to someone named "Antonio". It shows signs of long use but has been well cared for and has survived in far more original condition than many D'Angelicos, particularly pre-WWII ones. One hopes it served its original owner well, and it has been carefully played for many decades since. The tone of this very responsive guitar is incisive, as Swing-era instruments needed to be, but with an overriding roundness and balance that is the hallmark of D'Angelico. Compared to his more expensive and ornate creations, it still has a comparable tone -- indeed, some players have preferred the more basic models over the years. It remains a fantastic sounding instrument, a true gem built by one of the greatest guitar makers of the 20th century.

This D'Angelico has long been the property of Bob Jones, well known around the NY area over the last 50 years as a master musician in many styles and the dean of generations of Brooklyn luthiers. While not generally a gigging instrument for him it has been played and enjoyed for decades. It also includes a fascinating 1975 letter from D'Merle (who owned the D'Angelico name) with details on the guitar and recommending James D'Aquisto for some fret work! We are honored that Bob chose us to pass this native New York gem along; as George here at Retrofret pronounced upon playing it "THIS is a GUITAR"!

This is a well-played guitar but remains nicely original showing signs of long use but no major repairs or alterations. It is also a very fine-sounding instrument, even by early D'Angelico standards. There is general finish wear to the entire instrument in the form of scratches, scrapes and dings, but the only large area of worn through lacquer is on the back of the neck, mostly on the bass side. There is a small worn away spot on the top/back seam on the curve of the upper bass bout, and some deeper dings and scuffs on the back.

The instrument shows less in the way of cracks than many older archtops. There are two tight grain splits on the top, one on the upper bass bout running forward from the apex of the F hole, the other just off the bass side of the fingerboard. Both were solidly sealed and cleated decades ago, with some minor topical touch up. Other than this, the original finish has no overspray or other alterations. The top and back center seams which often move on these guitars as the wood shrinks and ages, have never opened up. The neck laminate seams are also solid with no notable movement or open spots.

All hardware remains original including the bridge, tailpiece, tuners, pickguard and even the composite endpin. There is an added reinforcement under the upper half of the pickguard with an integral mounting block that looks decades old. Neither the pickguard or binding show any signs of Celluloid deterioration or distress. The guitar appears to have been refretted decades ago, with wire similar to the original; these frets show some minor subsequent wear. The fingerboard was likely trued at the time and shows hardly any wear at all.

This is simply a very fine-playing and sounding guitar, substantially unaltered from John D'Angelico's original creation with just typical maintenance repairs. Although originally a lower-priced model than an Excel or New Yorker it sounds as wonderful as they usually do and still functions perfectly even after over 80 years. It still rests in a period (probable original) blue-lined hardshell case that has some external repair (it was long ago overpainted in black) but is still completely solid. Overall Excellent - Condition.
×