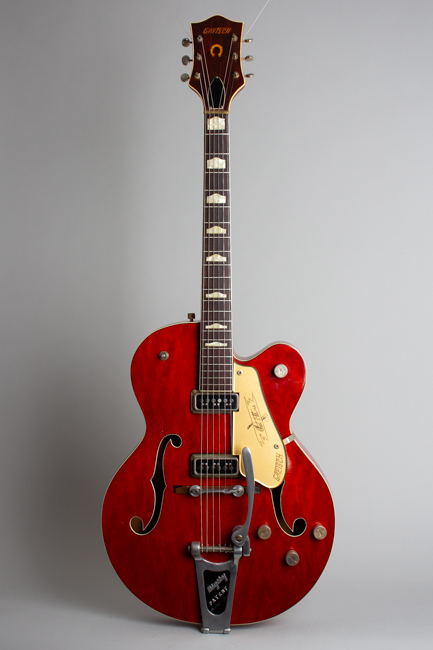 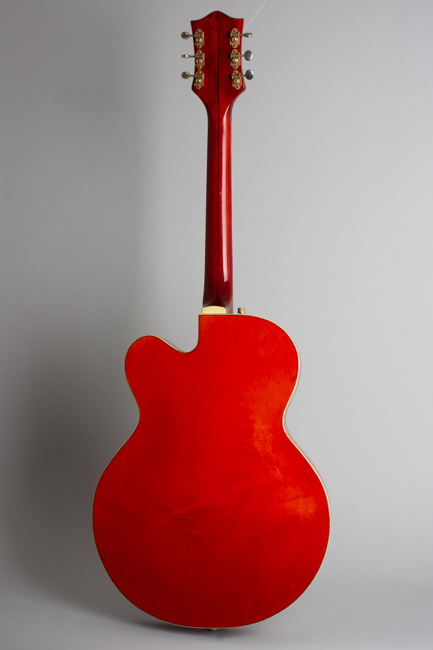 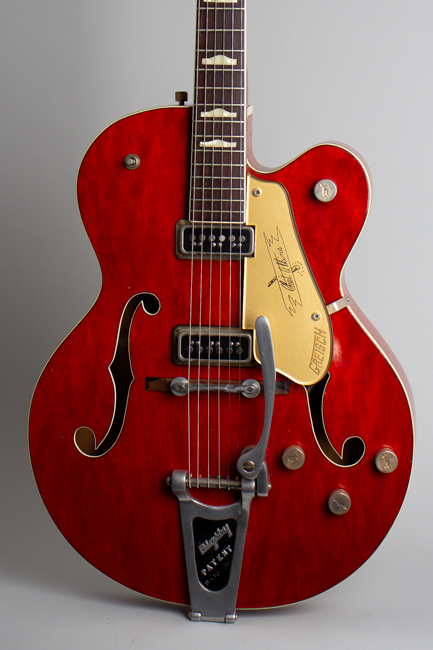 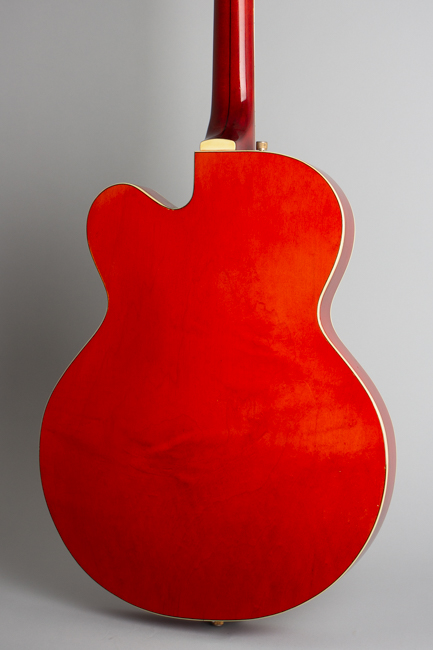 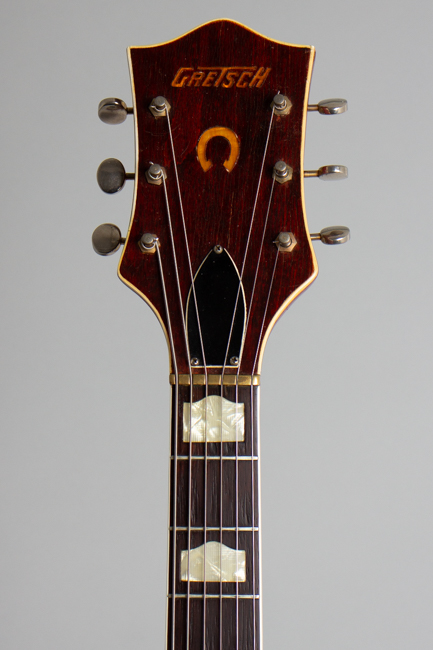 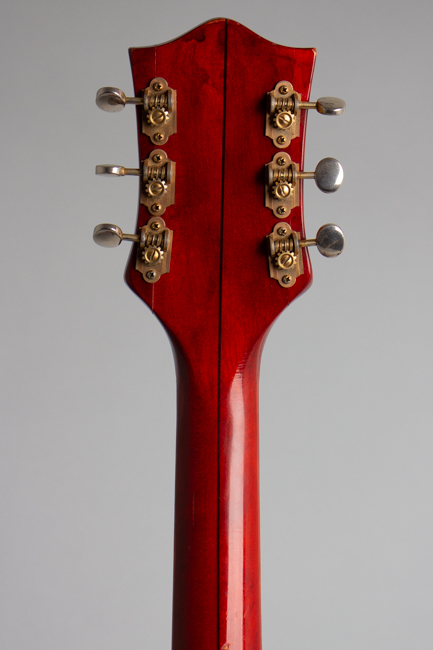 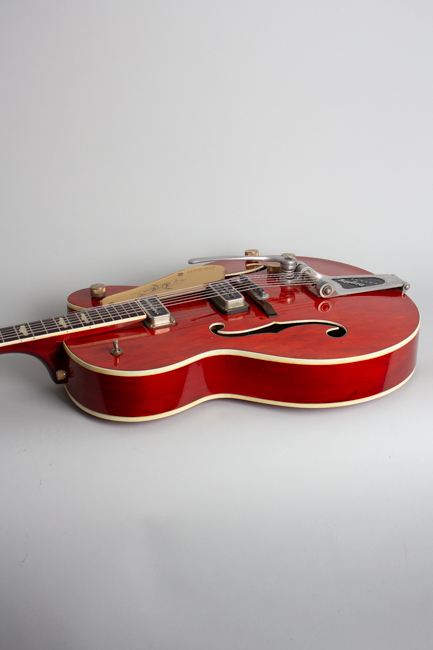 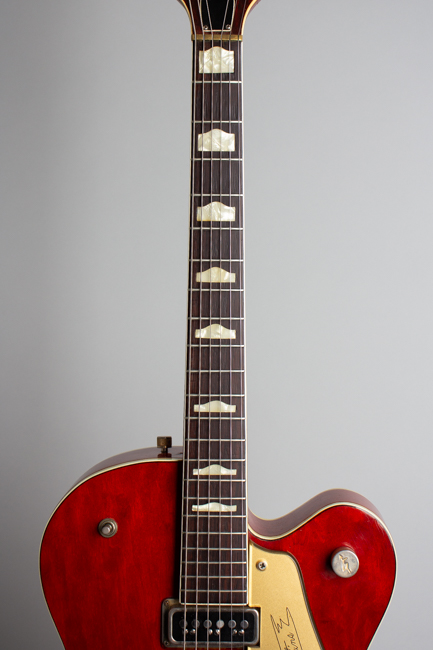 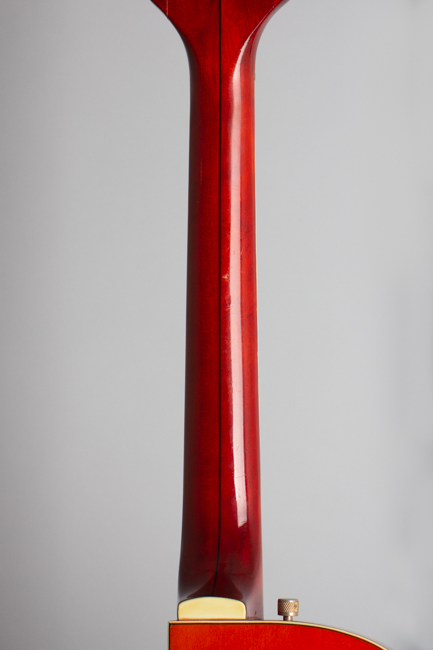 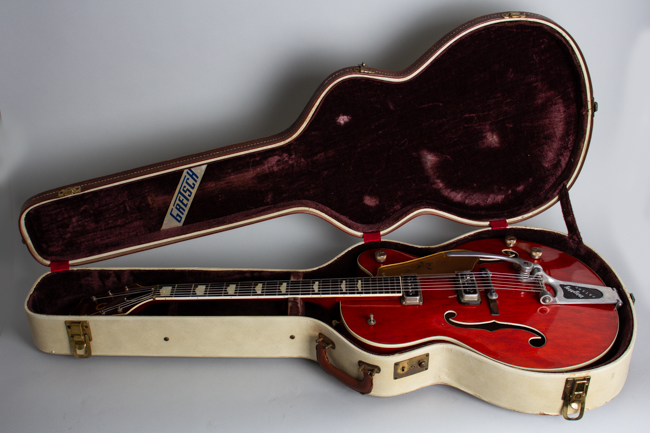 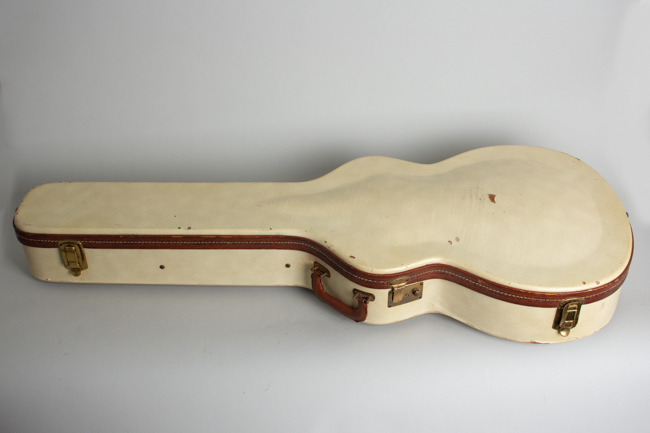 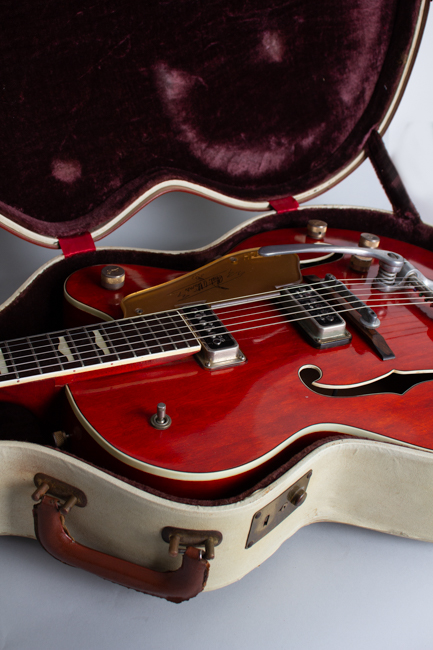 The1957 Model 6120 Chet Atkins hollow body is considered to be among the Gretsch company's most classic creations, one of the iconic American vintage guitars. Along with the flashier but much rarer White Falcon, the "Western Orange" 6120 has long embodied the Gretsch aesthetic, especially symbolic of the early rock'n'roll era and the 1950s in general.

Gretsch guitars of the 1950s often evolved quickly; in 1957 the features of the "Chet Atkins hollow Body" were transitioning from the full-out western blitz of the first 1955 models towards the sleeker '60's stylings. This guitar is from mid-1957 and is particularly distinguished by its darker amber-red finish compared to most 6120s, even from the same year. This gives is a slightly more subdued if arguably more authentically "western" look comparted to many of its brighter or paler orange brethren. This finish is fairly rarely encountered and appears to have simply been a production eccentricity, not a designed difference. The back of this guitar is actually somewhat more "orangey" than the rest, but all finish is original.

This guitar's other features are specific to this period. The hump-block inlay in the bound rosewood fingerboard was only used around this time, replacing the earlier blocks with western engraving. The guitar mounts two DeArmond Dynasonic pickups, used by Gretsch on all electric guitars up into early 1958. Chet Atkins himself was not enamored of these units, and requested they be replaced with the Filter 'Tron humbuckers designed for him by Ray Butts. The DeArmonds impart a sharper, more cutting sound with a lot of attack, especially for a fully hollowbody instrument.

A distinctive appointment for this year is the Bigsby tailpiece with the stop built into the cast arm and slot-screw attachment. This is nicknamed the "Duane Eddy" arm as it equipped his iconic 6120. The next year Bigsby simplified the design with a flat metal arm, the rotation stop moving to the cast arm support piece; this earlier design was only used for a year or so. This guitar mounts an aluminum Bigsby bridge saddle on a wooden base, a fitting also specific to the earlier 6120.

As noted the finish is a rare and unusually dark variant of the "Western Orange" seen particularly on guitars in this specific serial number batch. The Model 6120 used by Duane Eddy on all of his early records had features nearly identical to this one; that guitar has a serial number three batches later, built perhaps a couple of months down the line. This is easily one of the nicest Gretsch guitars we have ever had, a real stunner too look at with a sound and feel as good as they come!

This beautiful 6120 shows light wear but overall remains in clean and original condition. The finish has some typical checking, most heavily on the headstock face. There are some random dings, dents and scuffs but really not a lot of finish disturbance. Everything on the instrument is original except the riser ring under the bridge pickup has been neatly replaced; the original suffered Celluloid disintegration and did tarnish the plating on the pickup casing directly above it. There is a slight seam separation on the back of the headstock below the high e tuner, solid but visible. There are endemic to period Gretsch models as they ran the tuner mounting screws directly into the laminated seam.

The guitar shows no other issues; there is none of the common binding deterioration at all. The neck angle is excellent, the guitar does not appear to have ever had or needed a neck re-set. If one has been done it would be the neatest job we have ever seen! The original frets have been crowned down somewhat but still have life in them. This is simply an exceptionally fine playing and sounding 6120 from one of the classic years; a treat for any Gretsch fan and in particular the Duane Eddy afficionado. It includes the original cowboy case still in solid shape with a bit more wear than the guitar. Overall Excellent Condition.
×