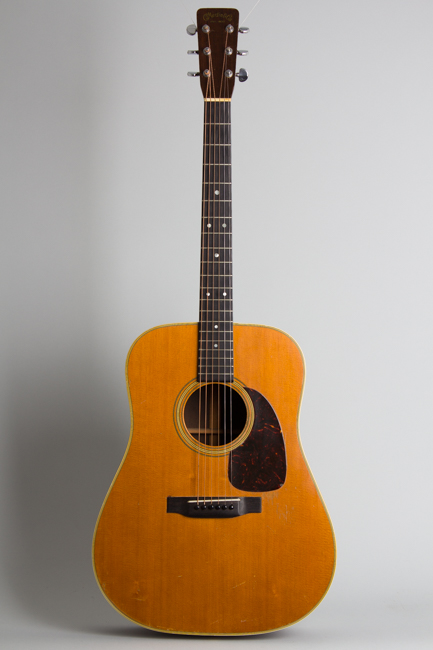 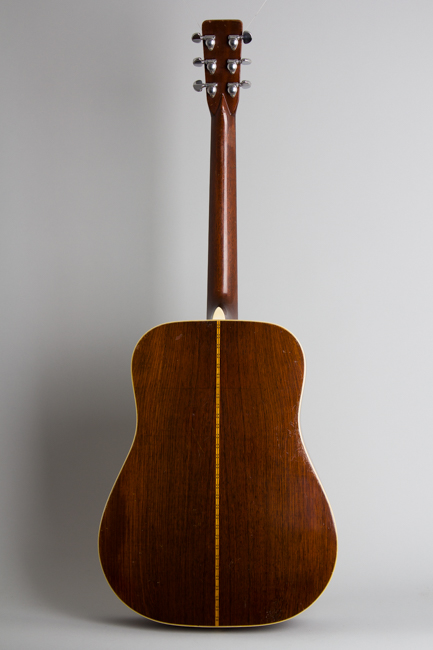 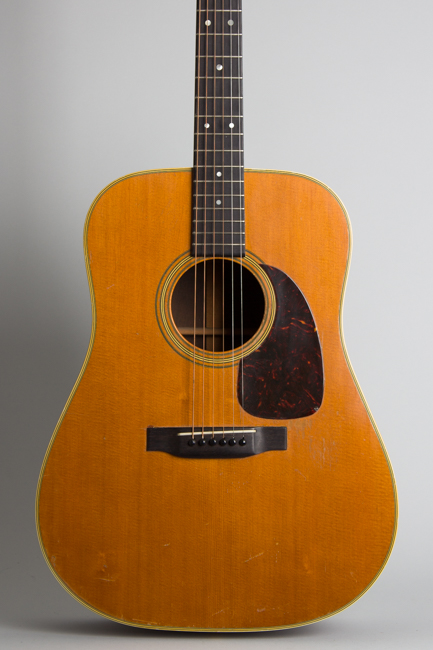 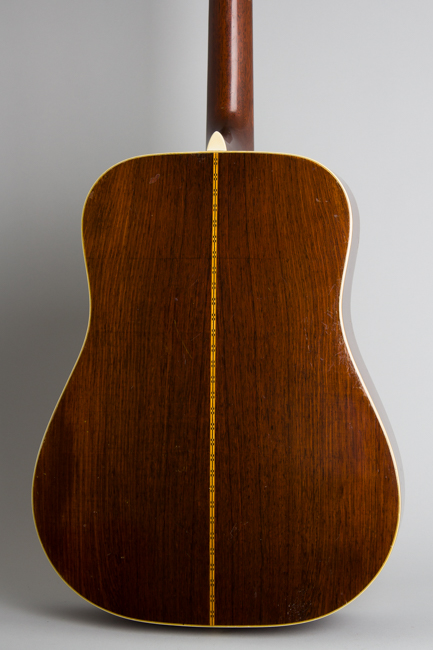 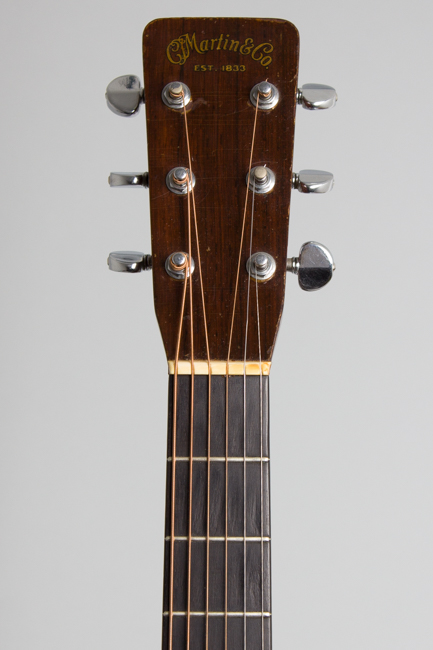 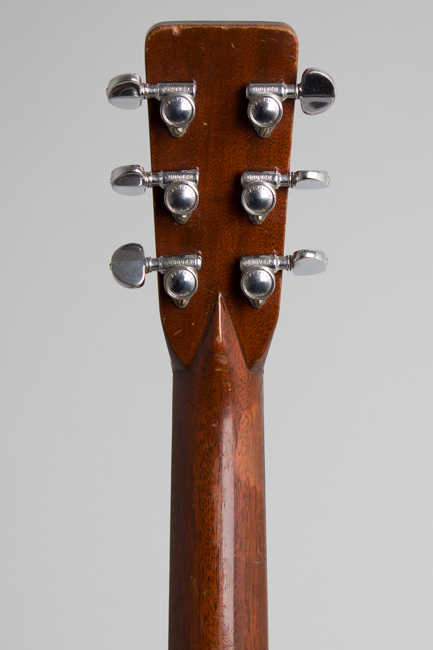 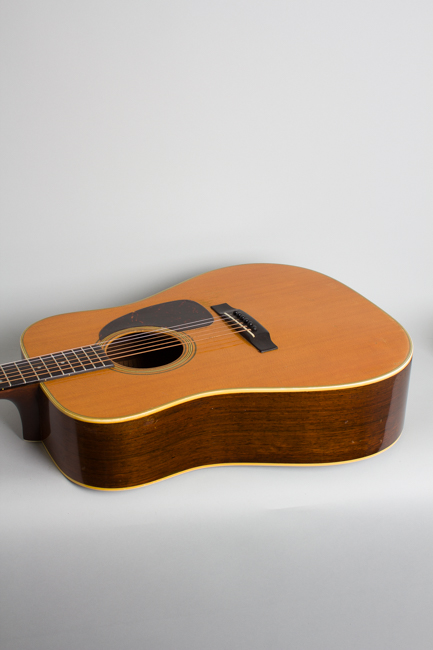 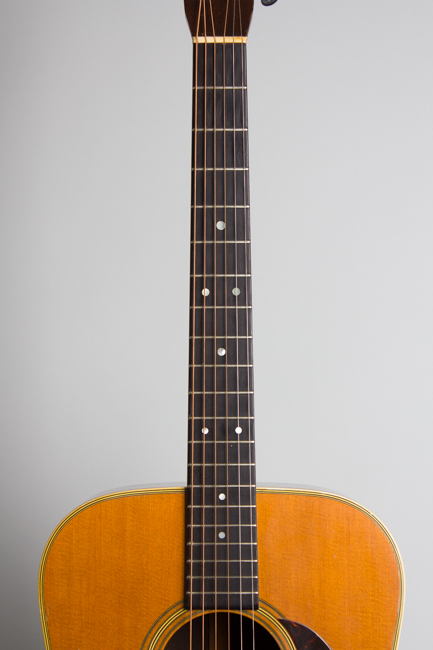 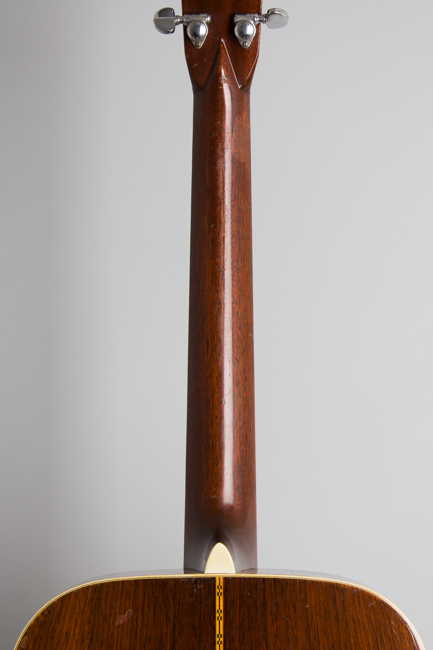 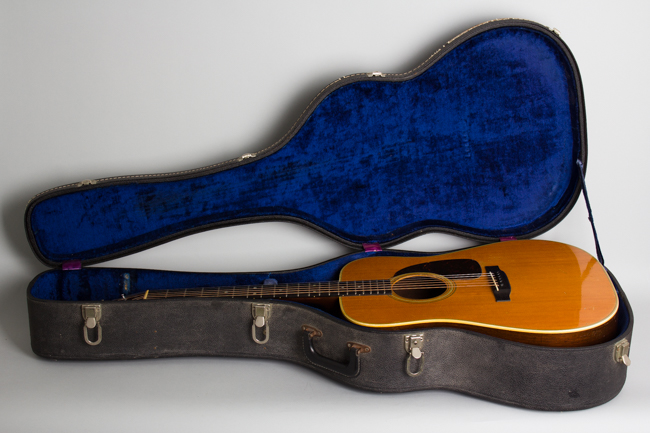 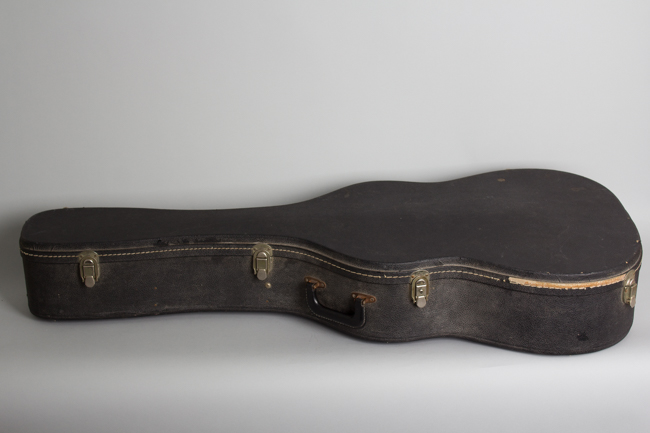 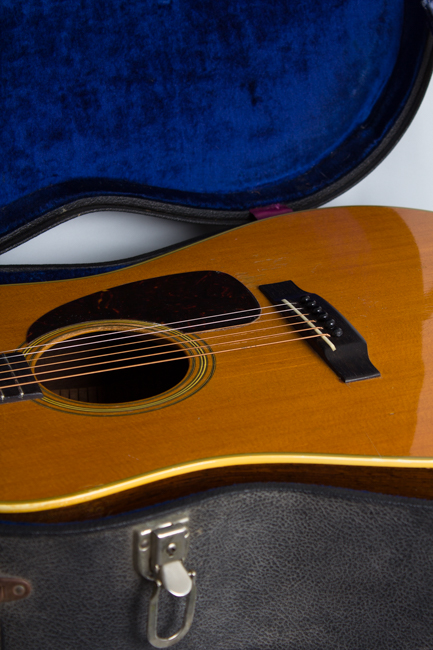 
This somewhat played-in but fine sounding Martin D-28 dates to mid 1958, built just as the runaway success of the Kingston Trio was about to make ownership of this exact instrument a badge of honor for EVERY aspiring folk guitarist! The Country & Western stars of the day had long also made the D-28 a standard, and many would not be seen without one! After WWII this was the biggest, best and most expensive guitar Martin made. The elaborate pearl trimmed models were discontinued during the war and not revived, leaving this comparatively austere rosewood Dreadnought as top of the line. Despite strong competition from Gibson's Jumbos, in the 1950s the D-28 was the final word in a flat-top instrument to most professional players.

This example was one of 677 sold in 1958 at the fairly stiff price of $270 (without case). It shows the classic period appointments: multi-layer celluloid binding on the back and top, a long-saddle ebony bridge, "Big-dot" graduated pearl inlaid ebony fingerboard, tortoise pattern Celluloid pickguard and the then brand new Grover Rotomatic "patent pending" tuners. It features a beautiful straight-grained Brazilian rosewood back with a dramatic bookmatched streak and a tight and even-grained spruce top that would also be considered premium wood today. The mahogany neck is fairly slim with a noticeable "soft V" profile.

While this is a fabulous guitar to look at as with most old Martins the real beauty comes in the playing. The D-28 is one of the most respected of all Martin models, and this very easy playing and fantastic sounding example is a prime example of why. It offers a powerful full-range sound and is more even sounding across the fingerboard than some while still maintaining the powerful bass response D-28's are prized for. This guitar is perfectly suited to period styles including purely acoustic Bluegrass of folk, acoustic/electric Honky Tonk or any more modern playing applications. This is a gem of an early "Folk-era" D-28, a smooth player and simply classically excellent flat-top guitar.

While this guitar has seen a decent amount of use over six decades; it has been well-maintained, remaining largely original while showing some typical wear. The top finish has checking and dings, dents, scratches, press marks particularly on the top lower bout. A bit of top finish is worn through into the wood around the lower soundhole rim and the back edge of the pickguard. The bottom edge of the bass side lower bout has a press mark and a scratch, presumably caused by a case lid bite. These are the only spots where the top is worn beyond the superficial. There are numerous mostly small marks on the body, but it remains reasonably clean throughout. There is some minor buckle rash and a few small spots of finish loss on the back and sides, one deeper mark on the back below the heel.

Much of the finish on the back of the neck is worn down to the clear coat, and further through to bare wood in the first position. There are some small dings, dents and scratches, but there are none of the deeper capo bites often found on guitars from this era. The wear gives the neck a smooth played-in feel that is difficult to replicate without decades of play time. The headstock has some worn spots mostly around the edges and corners.

The top has two pickguard cracks, one under the "B" string and another at the outer edge closest to the waist. The pickguard itself is original and shows signs of having been carefully peeled and reglued to relieve stress as the pickguard shrank. There are no cracks to the rosewood back and sides. The instrument has had a cleanly done older neck set and the bridge and saddle have been replaced. The bridge retains the contours and footprint of the original with a few small marks around the edges. The interior of the guitar is untouched, including the original small maple bridge plate.

The guitar has been refretted with fret wire that matches the original Martin specifications; these frets have light wear but plenty of life left. This is a very fine player with a lower, more supple action than many D-28's, responsive to a lighter touch but retaining a tremendous sound when pushed. It is housed in a nice period HSC with some wear but solidly functional. Very Good + Condition.
×