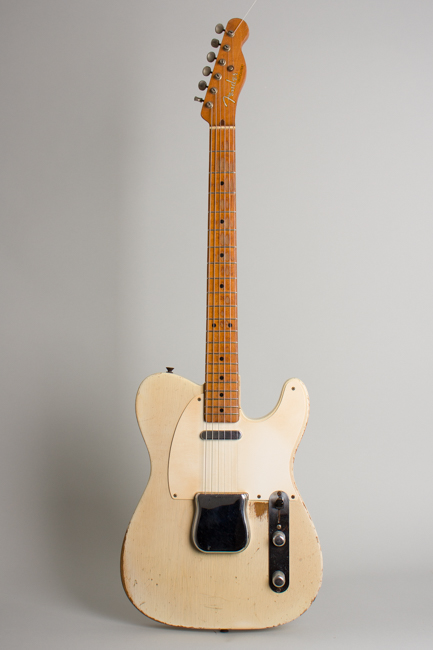 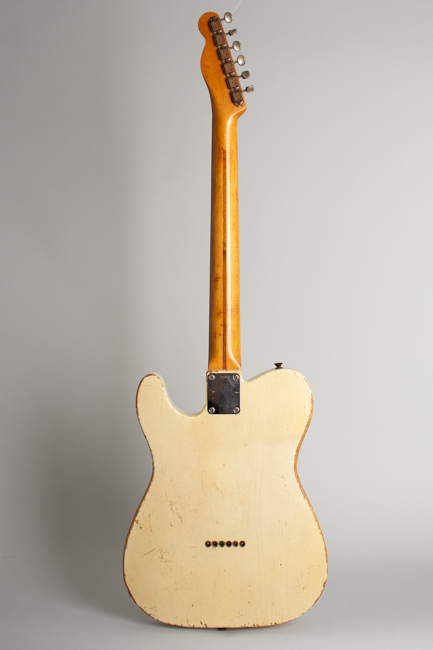 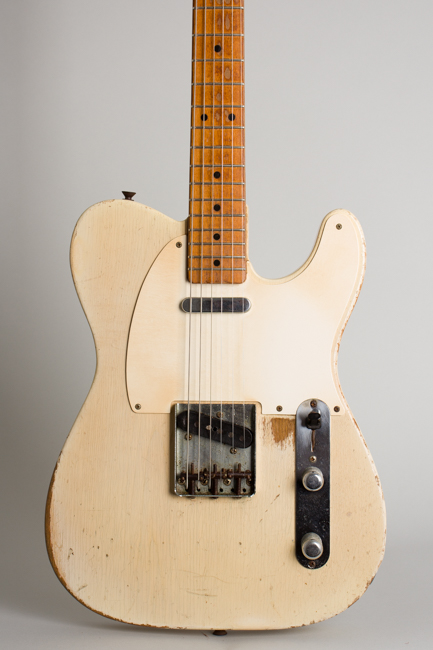 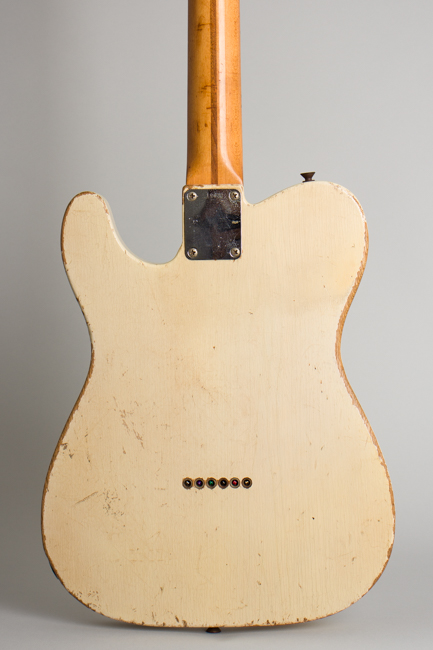 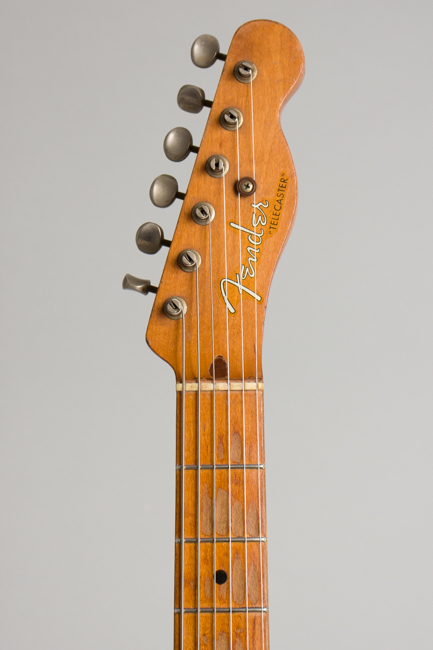 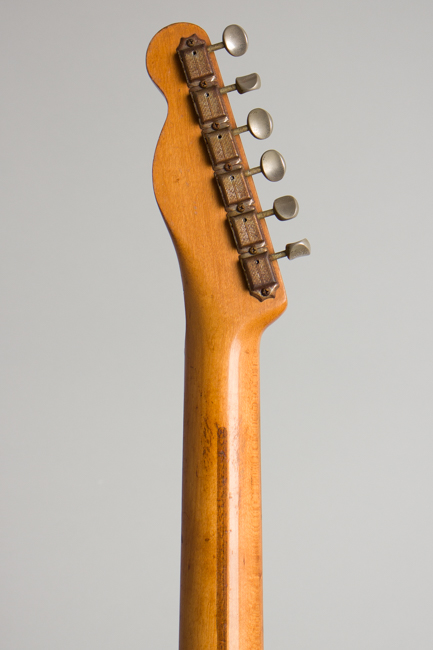 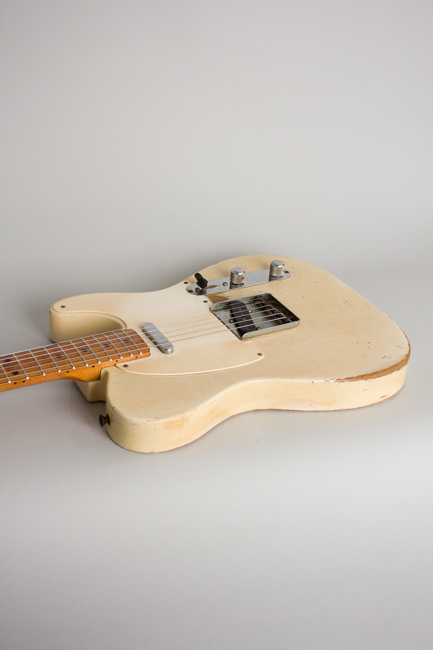 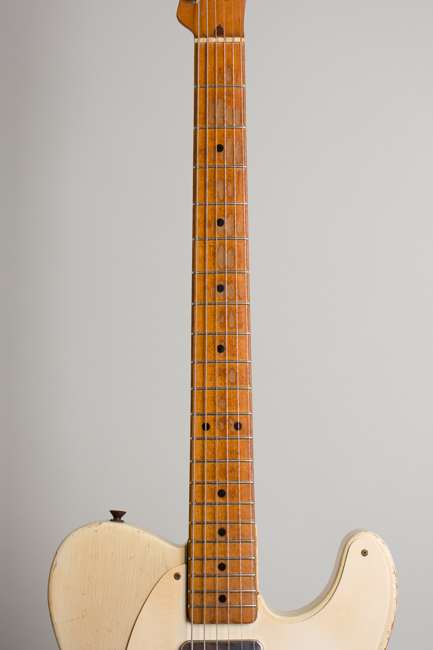 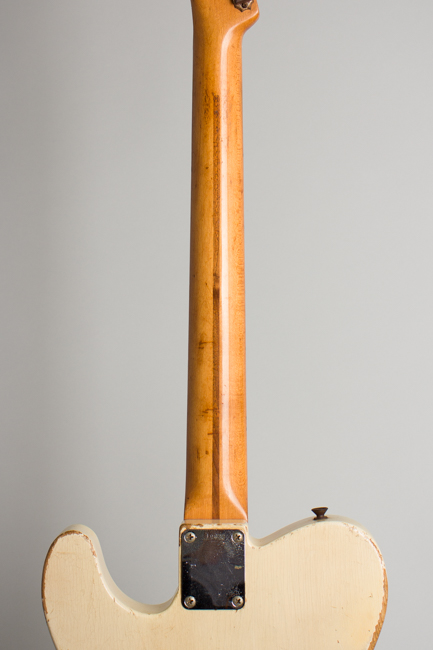 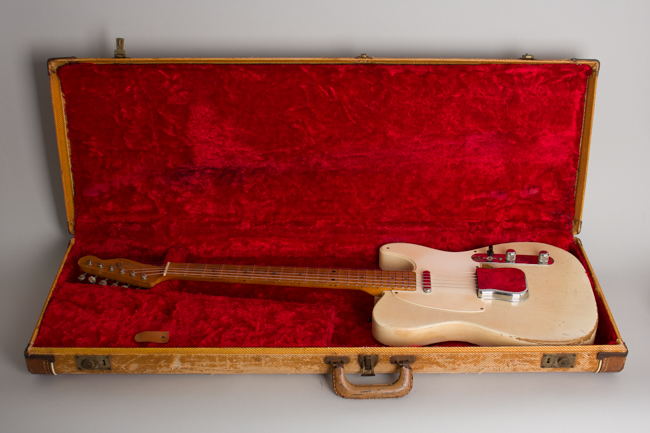 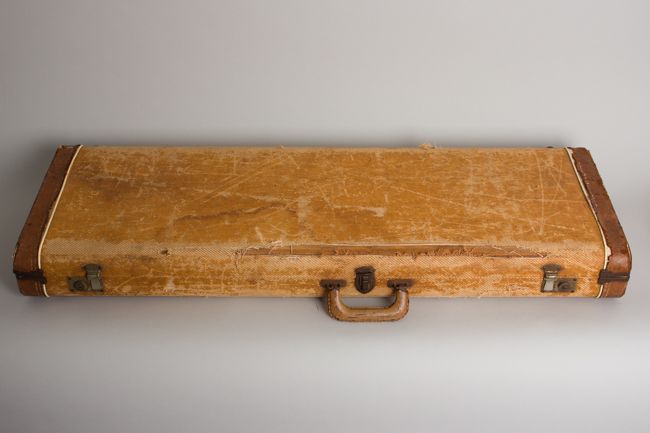 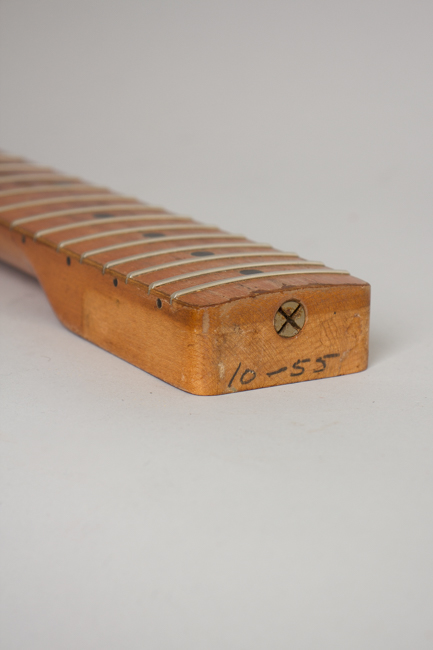 This beautiful natural relic of an early "white guard" Telecaster has some play time under its belt but remains a superb example of original Fender greatness, worn in just right and a fantastic playing and sounding instrument. It is also an interesting transitional Tele that retains some characteristics of the "Blackguard"-era guitars, which run up through the end of 1954. This late 1955 example was made just as the fall rush for '55 was probably kicking in at Fullerton and shows a mix of features specific to the time period.

The most noticeable is the then-new single-ply white plastic pickguard, which started to replace the earlier black phenolic on Telecasters and Precision Basses about a year earlier. The grained ash body is dated 10-55 under the finish in the lead pickup rout. It has a naturally aged white-blonde finish, showing a slight yellowish cast but not amber-colored as the earlier '50s style ages into; this lighter look would be the norm right into the '60s. Despite some heavy use the body appears only lightly "smoked" and retains the lighter, whiter blonde look; the neck and pickguard are more heavily ambered.

The one-piece maple neck is dated 10-55 on the heel. It has a medium/chunky round profile with the beginnings of slope to the shoulders, starting the transition to the "V" shape that was to come. On the headstock the script Fender "Telecaster" logo decal still sits below the old style round string tree, unchanged from 1951.

The low 5-digit serial number is stamped on the neck plate, having moved there from the bridge plate when Fender harmonized all their electric instruments into one number series in early 1955. The bridge has the "angled back" smooth steel saddles typical of this period and the original style flat-pole pickup. This 1955 unit is not far from "Blackguard" sound territory, perhaps a tad brighter and crisper. The staggered-pole variant introduced shortly after would change the character of the guitar somewhat.

All internal components appear original except the tone pot, which is dated to late 1962 and appears to have been in place since that era. The original volume pot is dated to the 15th week of 1955. The original switch and wiring have been altered to "modern" switching allowing the two pickups to be combined and deleting the original forward "mud cap" sound as the dark bass setting is nicknamed. The pickups can now be blended easily, which to nearly all players is a more desirable setup than 1950s spec but not strictly original. This mod appears to have been done decades ago, perhaps as early as 1963 when the pot was replaced. The only other visible alteration is the inside of the control cavity was coated with black shielding paint decades ago when people thought that would actually do something.

This October 1955 Telecaster is a fantastic sounding guitar, a joy to play, and even to just take out of its original "knuckle buster" tweed case! The guitar was likely sold in late '55 or early 1956, by which time the Telecaster was already popular tool for a host of country and the earliest rock'n'roll and players. Many have been played into the ground, refinished or heavily modified in the years since. This one has a natural relic look and has been well played (in Florida, we were told) but survives with its original character and sound fully intact.

This well played but not abused '55 Telecaster shows typical wear from use and likely a long life in a damp environment. Apart from the electronics work noted above it remains an original and beautifully weathered 1950s Fender. The most noticeable wear is fairly heavy checking to the body and rubbed-away areas to the edges typical of slab-sided Teles. The finish on the face and back show considerable longitudinal checking and one deeper wear spot, with a random assortment of dings, dents and scrapes overall. The one seriously worn spot is on the top where a player's finger hooked around the bottom corner of the bridge, which wore the finish away and dug a bit into the wood.

Except for this the body has a weathered look but mostly escaped really heavy wear. The finish has not yellowed as much as one might expect on the exposed areas compared to the unexposed spots. The patina on the body is lovely, with loads of fine checking but no added finish or overspray. The original pickguard has yellowed noticeably on some of the top surface.

The neck finish has ambered quite a bit and shows evidence of a LOT of play time, with some typical spots worn through to the wood on the fingerboard and the back heavily worn down to the wood. It has been neatly refretted with wire consisted with 1950s spec, with virtually no wear on them since. The finish looks to have been polished out somewhat over the decades but does not appear to have had any intrusive overspray. The bone nut appears original and has been shimmed up a bit. The neck has that classic "played-in Fender" feel.

The hardware remains original except for the above noted alterations to the electronics and wiring. The external metal shows some noticeable wear; this is a heaviest on the steel bridge saddles which have noticeable corrosion but all the screws and springs are original and fully functional. The original bridge cover is included, though the guitar appears to have been mostly played without it judging from the amount of hand wear to the bridge.

The original tweed case has heavy wear to the seams and leather ends but is still functionally still intact. The latches are all functional and the interior is surprisingly clean. This 7.51 LB Telecaster (with the bridge cover ON) is a lovely package of 67+ year old Fender cool, a natural relic that remains a great players instrument. Very Good + Condition.
×