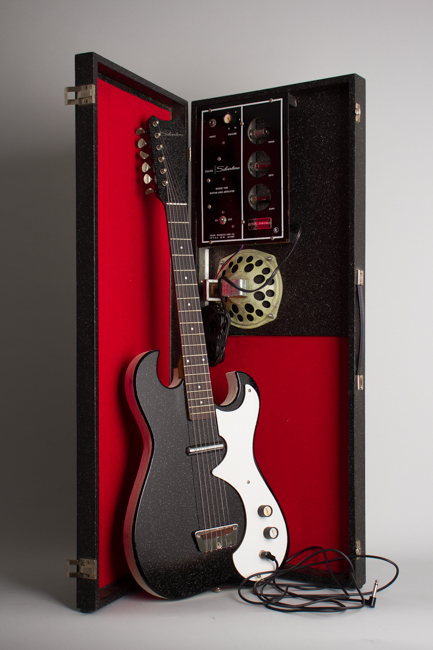 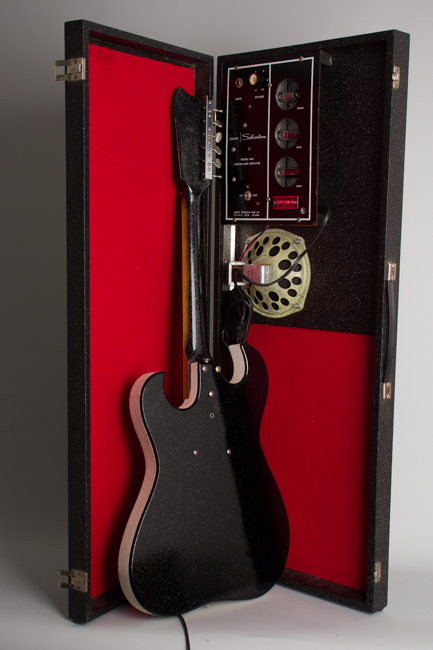 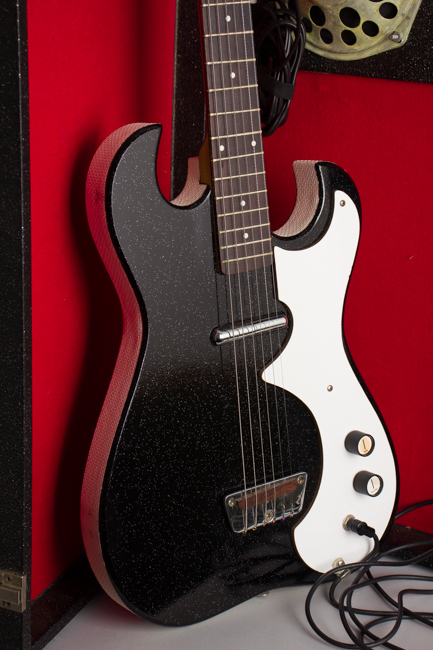 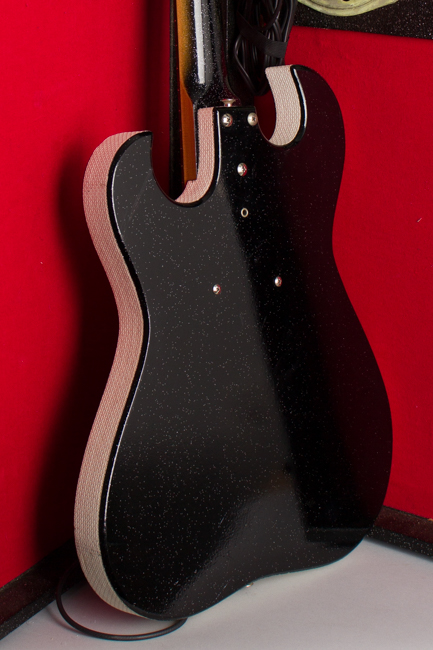 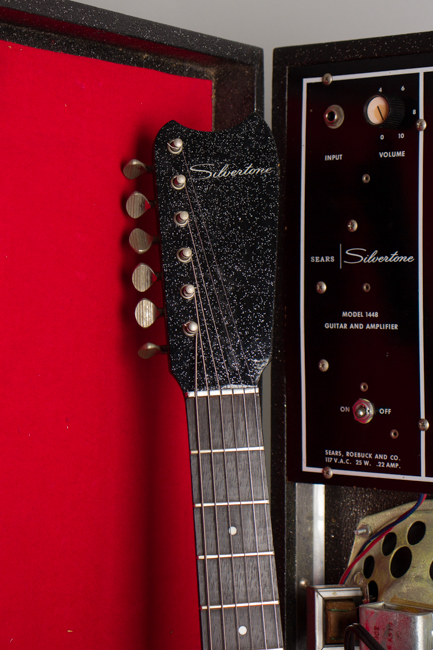 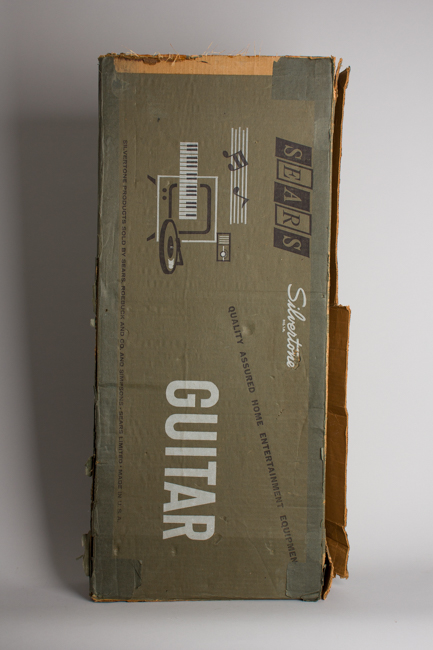 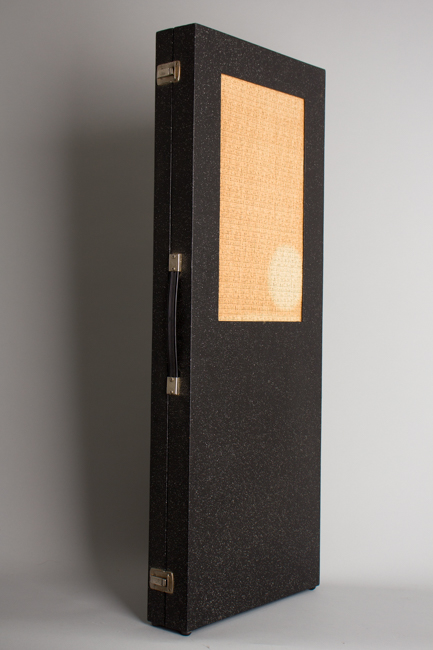 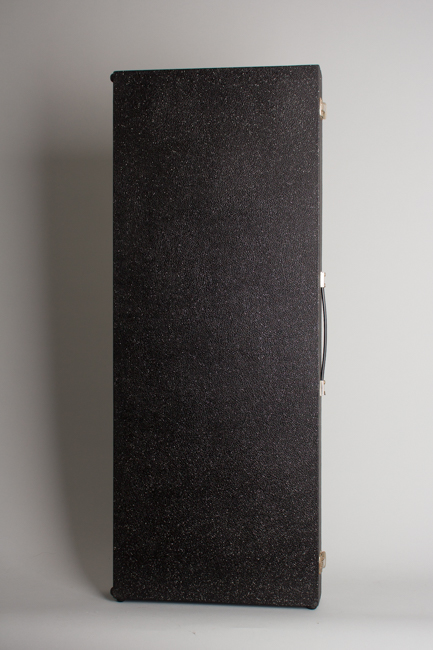 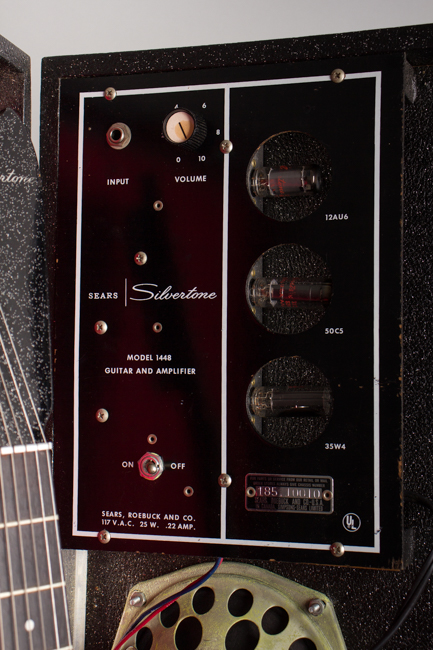 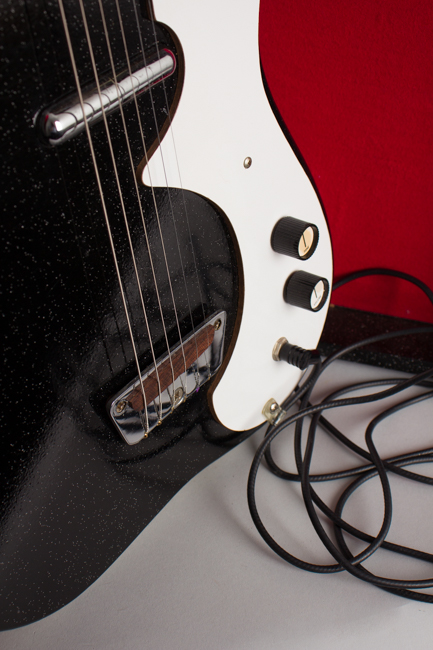 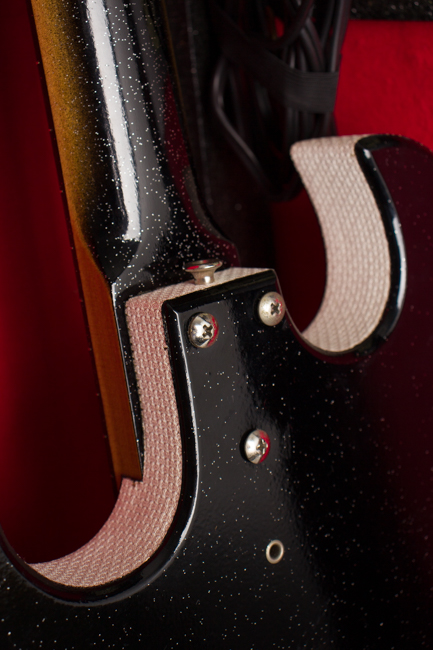 This is easily the nicest example of the classic Silvertone Model 1448 set we have ever had. Both the guitar and amp/case are original and complete with minimal wear AND they are still accompanied by the original shipping box that arrived at some lucky home from Sears in late 1965! Large numbers of these guitar/amp sets were sold in the 1960s, but only a handful of the decorated printed cardboard boxes have survived.

This 1448 was the less expensive of the two models of Danelectro-made Amp-in-case Silvertone 1960s guitars, sold exclusively through Sears. "Gee dad, I really wanna electric guitar" rang in countless parents' ears in 1964-5, and this nifty and budget-friendly combo ($x for the set) was a well-planned and easy solution. Once "mastered" they became the original equipment for thousands of aspiring teen combos in the mid-1960s, played in garages and school auditoriums across the nation. This one dates to the peak guitar-boom year of 1965, when millions of teenagers were looking for anything with 6 strings, particularly if it could be plugged in.

The 1448 guitar is built on a semi-hollow Masonite-and-pine asymmetrical double cutaway body with sharp curling "horns". It is finished in black sparkle lacquer ("the kids love sparkles" was the wisdom at Sears) with white vinyl edge trim and a white Masonite pickguard. The fittings include one great-sounding Dan-O lipstick pickup with tone/volume controls and the traditional Dan-O chrome plate bridge with rosewood saddle. The short-scale neck ends in a Silvertone logo "paddle" headstock with skate key-style tuners. This one retains its original pinned-to-the-pickguard cord, which was usually the first thing broken.

The amp-in-case half of the dup is a brilliant, if somewhat heavy solution to including everything in one package. (Pity the 11-year-old who had to carry this to lessons!) The amp itself (built into the lid) is rudimentary at best but does make a nicely gnarly sound when cranked. To a kid plugging in for the first time it must have been a revelation. This one works as well as it ever did, with the original microphonic Sears Silvertone tubes still intact.

This is a just a very little used example of these infinitely cool little classics; it really looks like it has been sitting in someone's basement or attic for most of the last 55+ years. The box is a bit beat up but more-or-less intact, the amp works OK but the guitar is the really functional piece. The Model 1448 guitar is still a neat piece of playable '60s fretted nostalgia and one of the best bargains in an American-made vintage guitar going well into the 21st century.

While not absolutely perfect this is a superbly preserved set, showing only some very light wear and little sign of ever having been really played. Most of the wear visible is to the outside of the case, as would be expected. The vinyl siding on the guitar has a few marks but remains fully intact, the finish has only some small marks on the back from prolonged contact with the vinyl cord. The knob inserts are yellowed, as they are actually made of paper! Both guitar and amp remain all original and complete, even the thin black cord pinned to the body (easily removable) is intact and working.

With a nice, straight neck, this is as good a playing and sounding example as we have had. The amp case has only minor wear to the edges and a bit of discoloration to the speaker grill. It works as intended; somewhat noisy (they all were!) but who cares when it is cranked? We have left it original and unmodified. The shipping box by contrast is fairly well worn but more or less intact, the cool graphics still display nicely. Overall this remains a great garage band set that looks like it's lived a long time in the garage, waiting for that first practice. "House of the Rising Sun", anyone? Excellent + Condition.
×