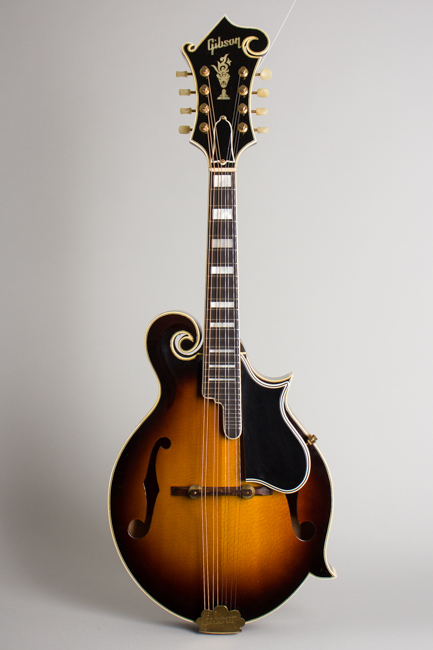 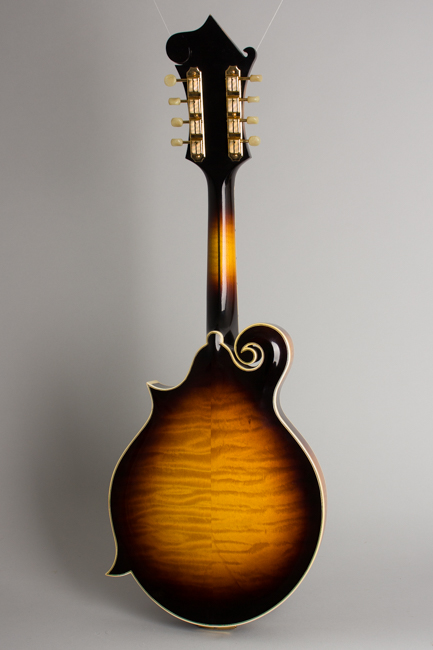 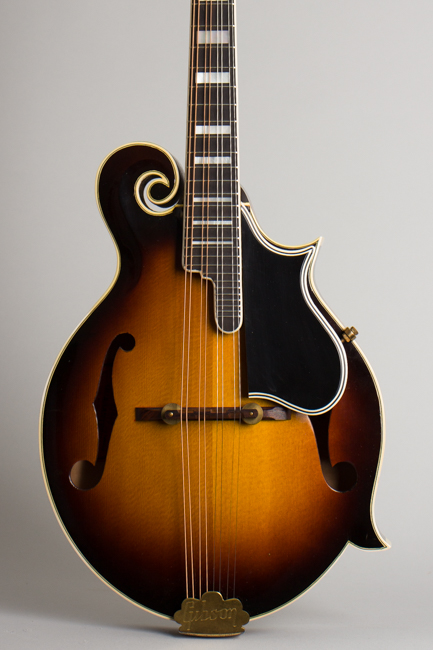 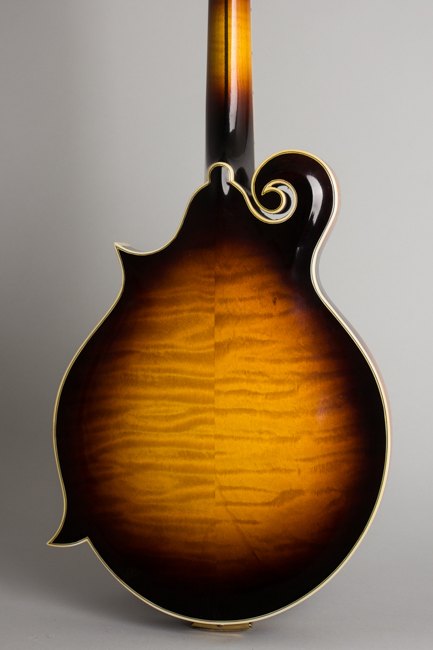 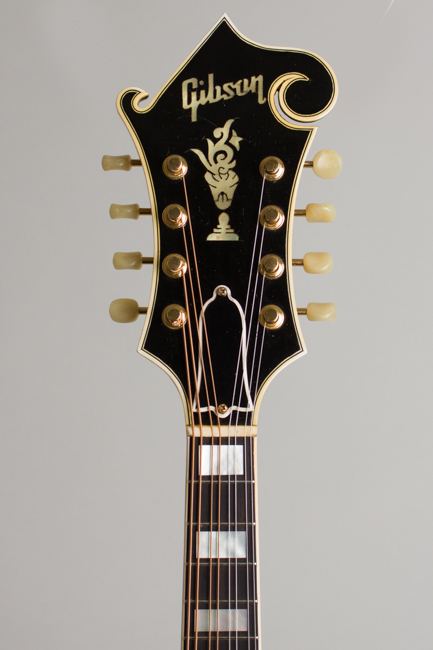 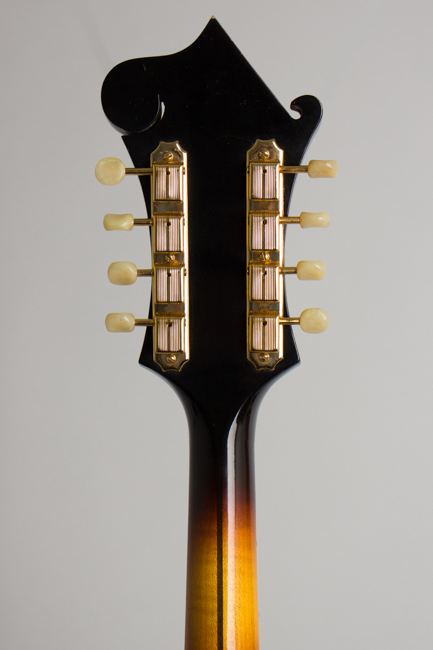 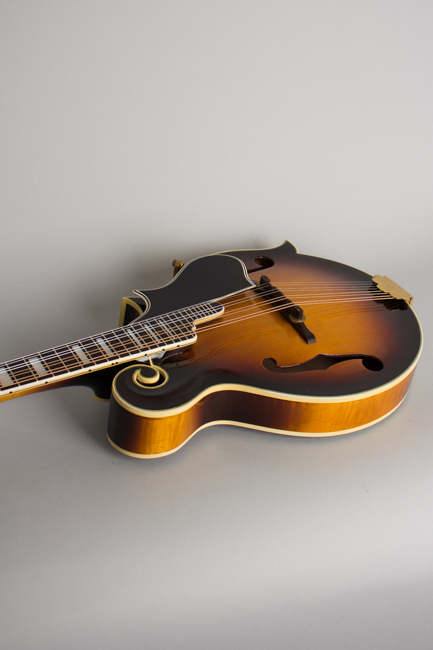 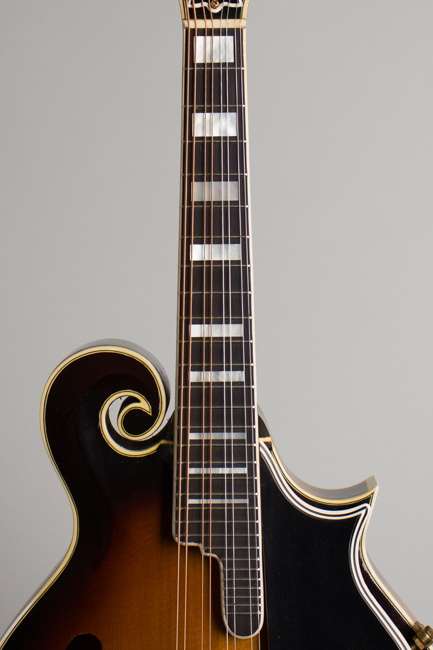 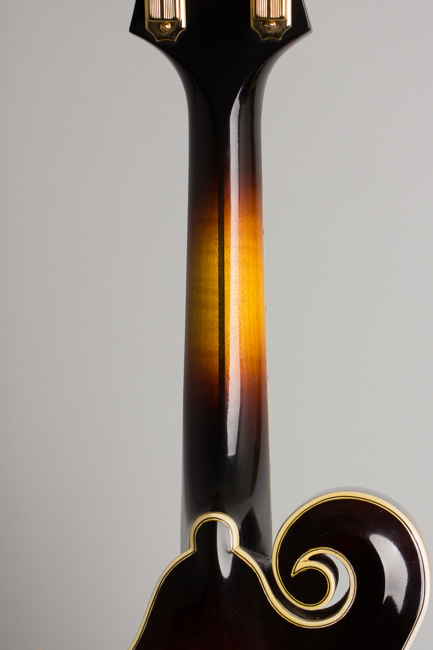 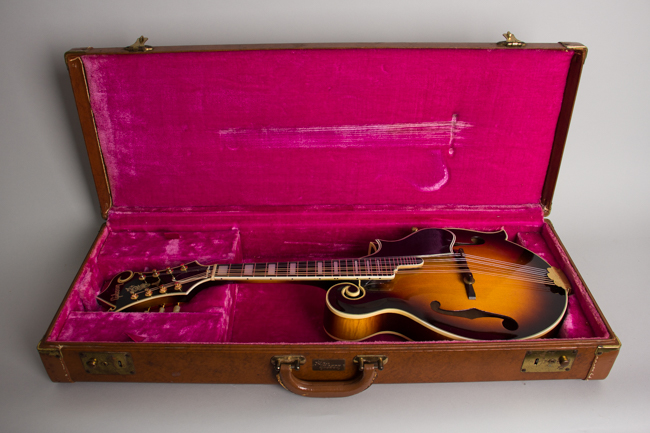 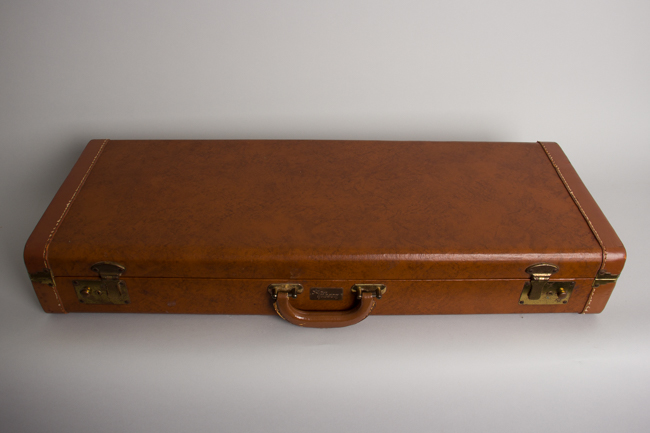 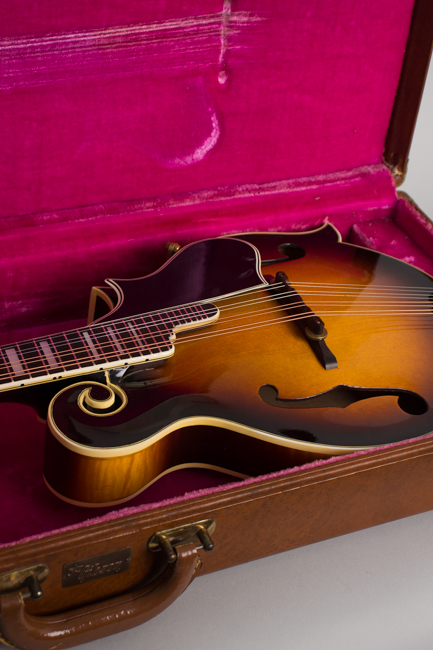 The F-5 has always been Gibson's top-of-the-line mandolin and the standard by which all others are judged, in bluegrass and related circles anyway. This F-5 dates to the mid-1950s and while less well regarded in retrospect than pre-WWII examples is still a beautiful and very high quality instrument. At the it one was made interest in the mandolin was picking up again after a long layoff, mostly due to the popularity of Bill Monroe and his emerging disciples. While Bluegrass as a genre was still gestating, bands who closely emulated Monroe's sound needed a mandolin, and the one they ultimately wanted was an F-5.

After a layoff since the war years, the F-5 had re-appeared in Gibson's line at the dawn of the 1950s. This example was shipped in December 1955, possibly the last of a grand total of 16 sold that year. One of the reasons for this miniscule production was the price; a new F-5 listed in 1952 for $415, raised in 1956 to $460. in the 1950s that was a LOT of money for any mandolin, and at the time old Gibsons from the 1910s and '20s were fairly plentiful on the used market. Many thousands of the lesser models survived, but vintage F-5's were ALWAYS rare. Still, an F-5 was the ultimate goal for any aspiring bluegrasser (and still some more classically oriented players) and there was nothing else comparable available new from ANY manufacturer.

The 1950s version retained the classic asymmetrical body with an upper scroll, two points on the treble side and f-holes. A sunburst finish graces all surfaces. The top, back and headstock are triple bound; the three-piece maple neck has an ebony fretboard single-bound with a side stripe. There are pearl block inlays from the first fret, and treble side extension with a total of 29 frets raised above the body. The laminated beveled edge pickguard has a gold-plated support, the gold-plated tailpiece cover is the simpler clamshell design with the Gibson logo engraved.

The headstock retains the classic Style 5 abalone "flower pot" inlay under the post-war Gibson logo with an open "b" and "o". inlaid in peghead. The gold-plated "no logo" Deluxe Kluson tuners have unusual "pearly" plastic buttons specific to this time period. While admittedly not as magnificent as a Loar this now 65+ year old mandolin is a very fine player with a powerful and well-developed sound, bright and cutting but still retaining the classic Gibson warmth underneath.

This mandolin is practically near mint; while showing a few superficial marks here and there it remains in exceptionally clean condition for its age, showing very little wear at all. It appears to have hardly ever been played, and we got a story with it that confirms that. Apparently it was purchased new by the patriarch of a performing family, but the younger members were seduced by rock'n'roll and electricity and the mandolin was never used in the act. That's the tale passed on to us, anyway!

The finish shows some small checking handling marks and tiny imperfections but really 1950's instruments do not come much cleaner than this 60+ years on. There is perhaps some minimal shrinkage to the tuner buttons but no deterioration, and minor plating wear to the tailpiece cover. The frets have been given a little attention, and a slightly slimmer bridge top fitted to allow lower action settings; the original is in the case pocket. This mandolin plays "like buttah" and it’s nice to coax some sound out of it after so many decades of silence.

The original case is also almost flawless, with very minor exterior wear. The "Eau Du Gibsone" vintage Kalamazoo minted smell is truly enticing when it is opened. Although by reputation the 1950s is not considered a great era for Gibson mandolins this is a fine sounding instrument that is aged in but hardly played and will likely blossom in depth and range with some actual playing time. This is pretty much a time capsule piece, they really don't come much better! Excellent + Condition.
×