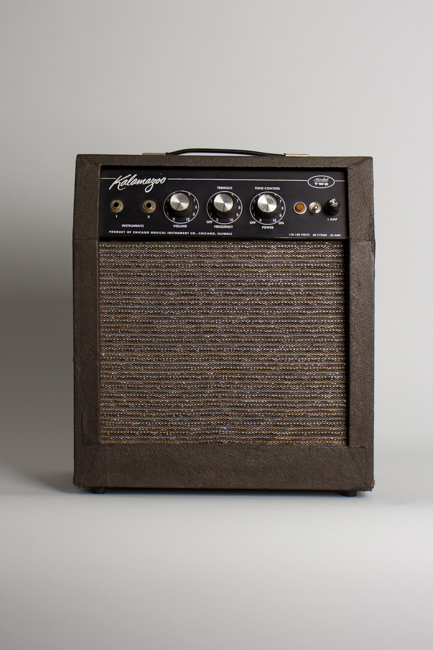 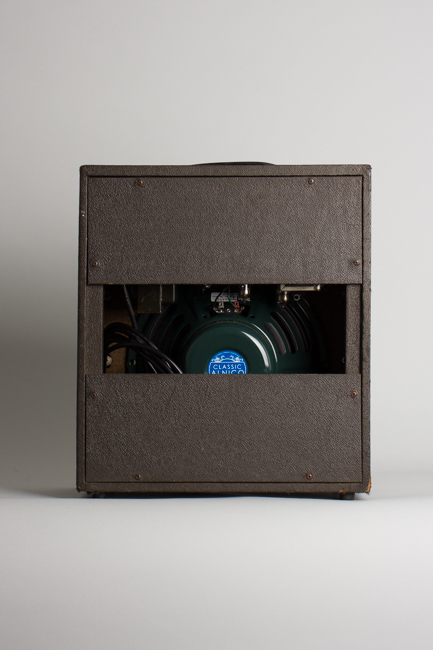 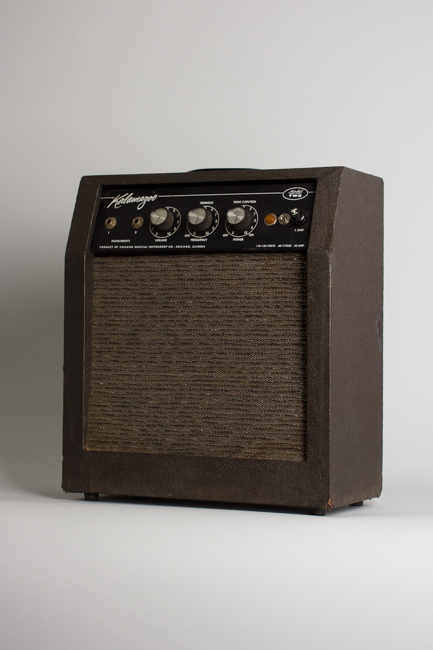 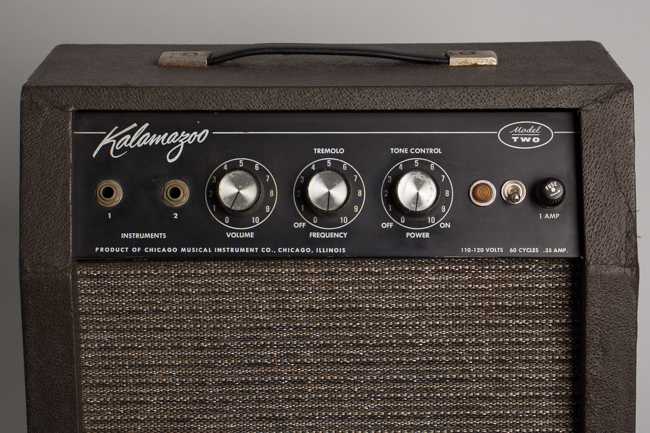 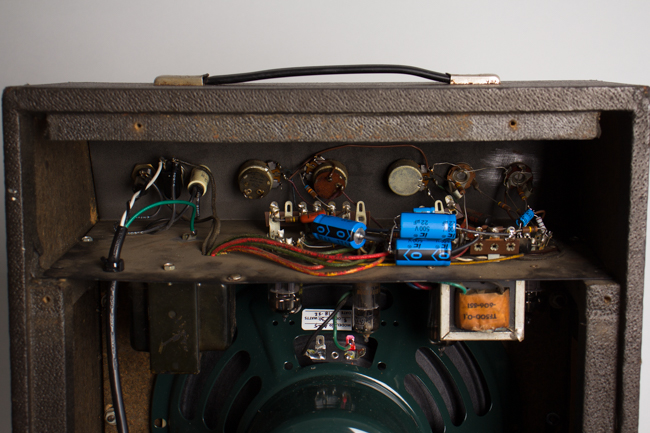 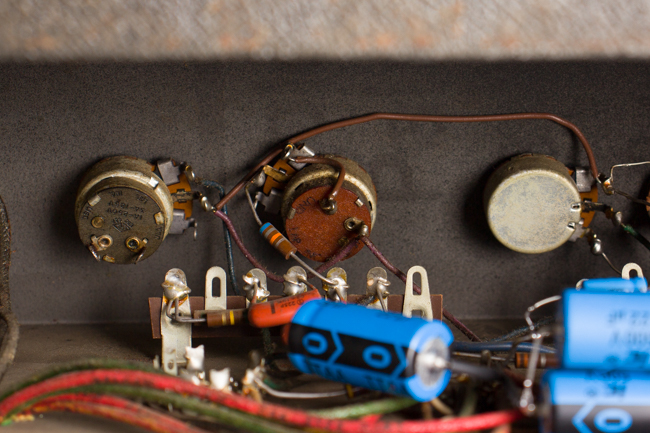 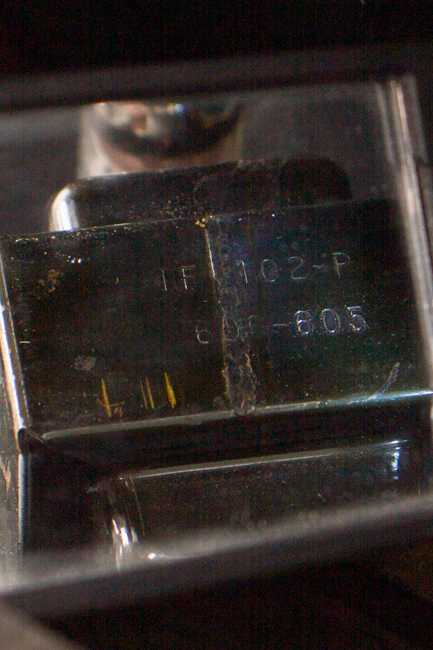 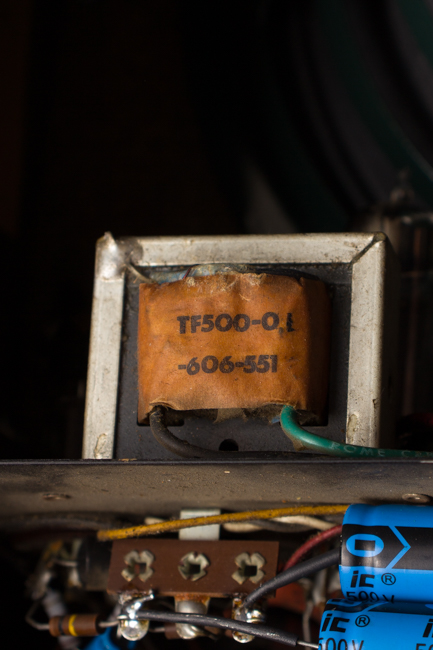 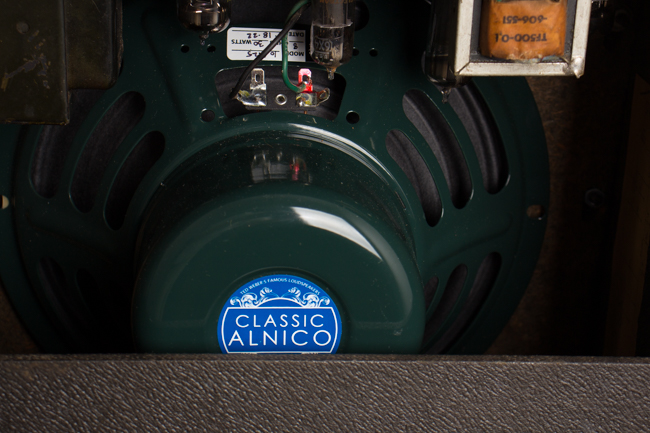 Gibson and its various parent companies have used the Kalamazoo brand several times over the years, one of the best known and beloved was the budget line by Chicago Musical Instruments (CMI) which was Gibsons parent company during the 60s. These little practice/student amps appear with two model designations, Model One and Model Two, the latter having the addition of an onboard tremolo effect. This model thus features a dedicated speed knob (the depth was fixed) in addition to the two "loudness" and tone controls. These two circuits were also at one point featured in the Gibson-branded Skylark GA-5 and GA-5T, respectively (not to be confused with the earlier Les Paul-amp adjacent GA-5, which is basically Gibson's take on a Fender Champ).

This little Kalamazoo Model Two may have been at the bottom of Gibson's product line in 1965-6 but represented a surprisingly nice value in a small, well-engineered, point-to-point tube amp. Still, they were originally made to a price, so some shortcuts were made. Most notably the cabinet was made of fabric covered particle board and the baffle of thin pressboard, rendering these amps notoriously fragile to scuffing and drops, and are thus increasingly rare to find well-preserved. Apparently this is where Gibson cut costs, as the electronic component quality generally is excellent.

The Kalamazoo amps featured a great set of transformers made by Schumacher as well as a tube compliment consisting of RCA and Raytheon branded tubes. A single 6BQ7 (aka EL84) provides around 6 watts of output power into a single 10" speaker. That being said, the circuit design greatly benefits to having some tweaks done, and while we usually work to preserve vintage pieces as designed, we've developed a "Retrofret special" for this particular amp, that has greatly grown in popularity with our customer base.

Externally, this amp remains in very good shape, considering the cabinet's proneness to wear. Apart from some minor scuffing along the edges and corners, the thin fabric covering is generally well-intact. Both the baffle and grille cloth are structurally sound and in excellent shape with no visible tearing or stains. The faceplate is clean and all three of the rare (and often lost) oversized knobs are present as well.

Electrically, this example has had a number of circuitry upgrades to improve clarity, response, and tonal muscle as well as to reduce noise and hum, which as built they are quite prone to. The power switch is now separately mounted on the faceplate instead of integral with the tone pot and the fuse is relocated to the rear chassis. It has also had a speaker upgrade to a 10" Weber 10A125, as the original speakers were very low budget. The tremolo has also been tweaked for optimal range of speed and lush depth. Both the Schumacher-made power and output transformers are original to the amp and are marked 606-605 and 606-551, dating them to the 5th week of 1966 and 51st week of 1955, respectively. The amp has also seen our typical maintenance, including a grounded 3-prong power cord, all electrolytic capacitors replaced, cleaning of all sockets, pots and jacks and power section biased to spec.

This is now a great-sounding little unit, quite a bit louder than as originally designed and with a smoother overdrive curve. This represents an excellent bargain in a small authentic vintage tube combo, and we recommend getting two and running them side by side for the ultimate 10-12 watt, double-tremolo stereo rig! Very Good + Condition.
×