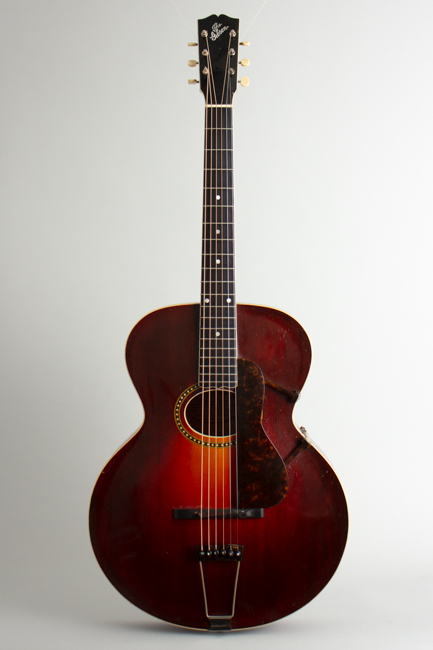 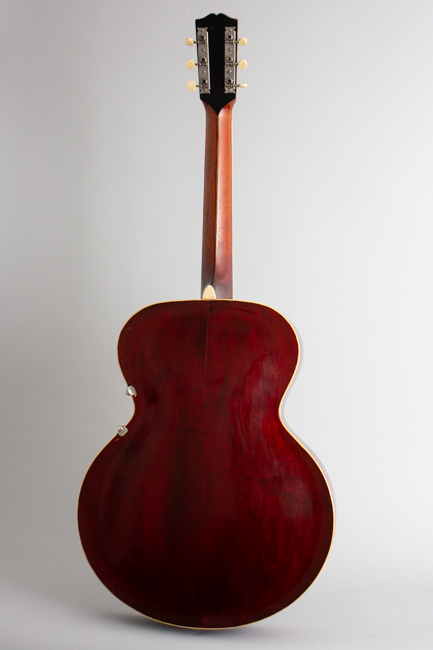 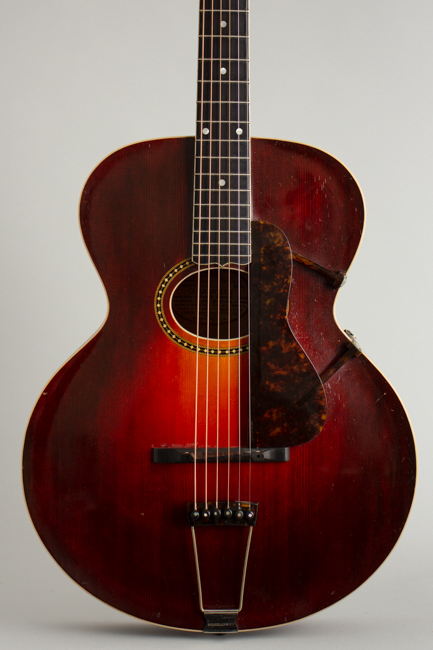 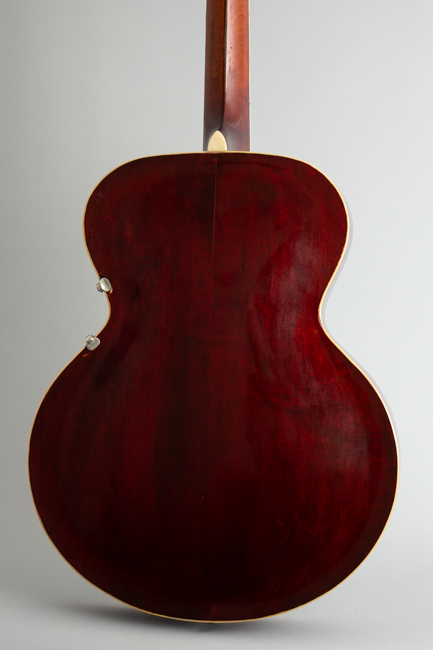 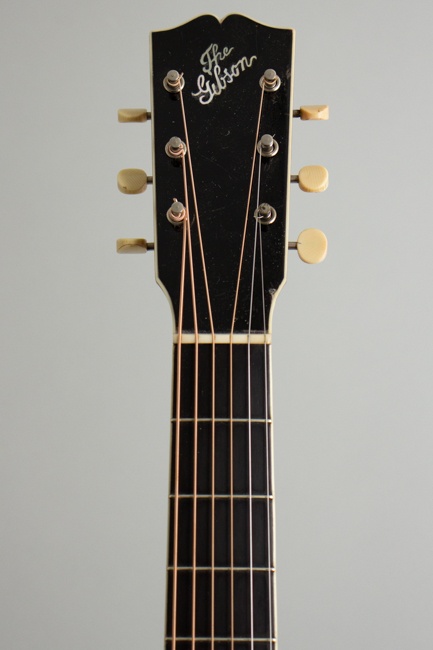 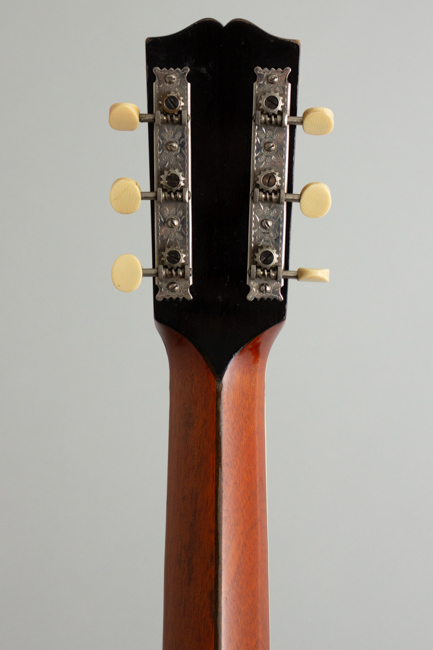 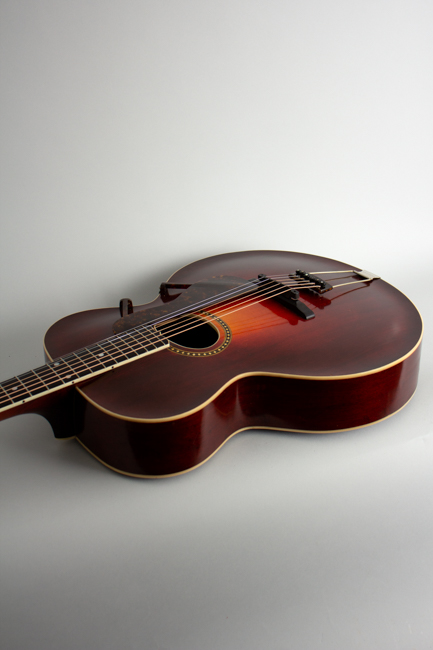 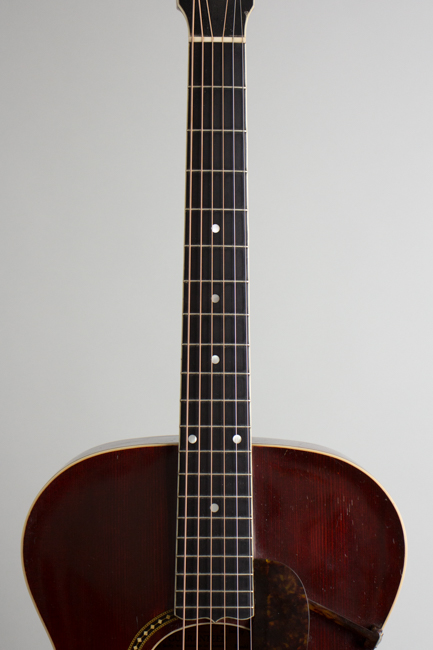 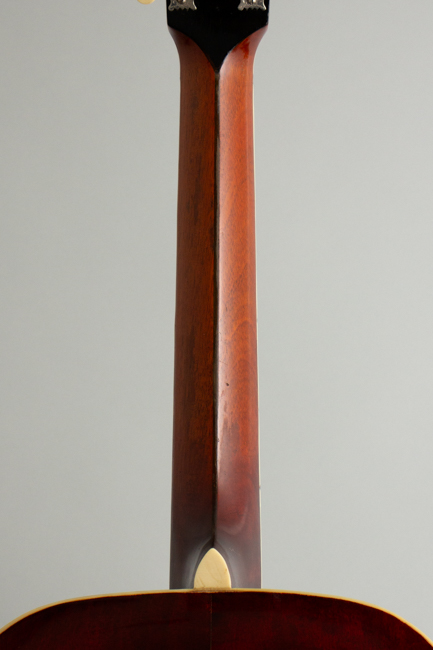 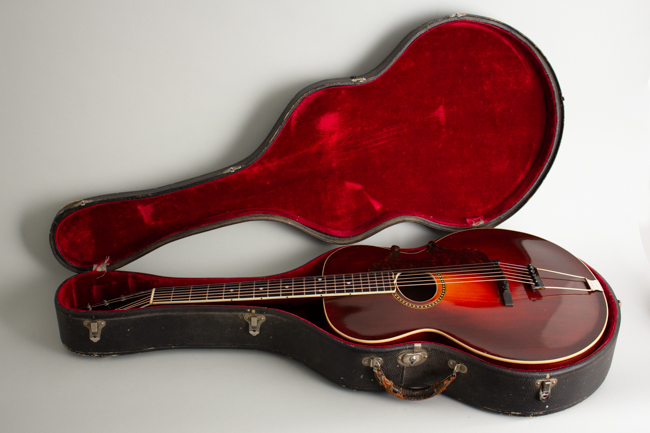 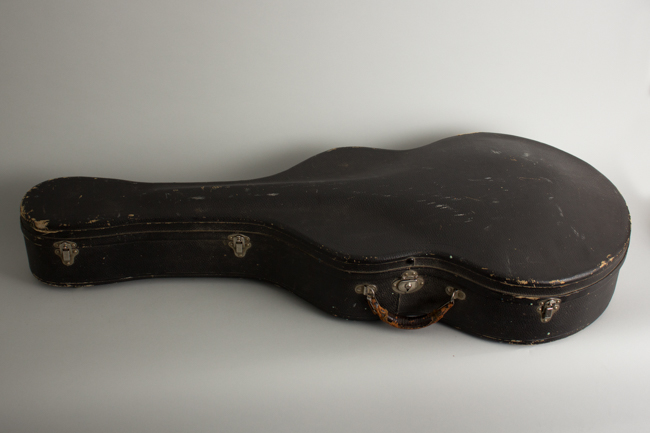 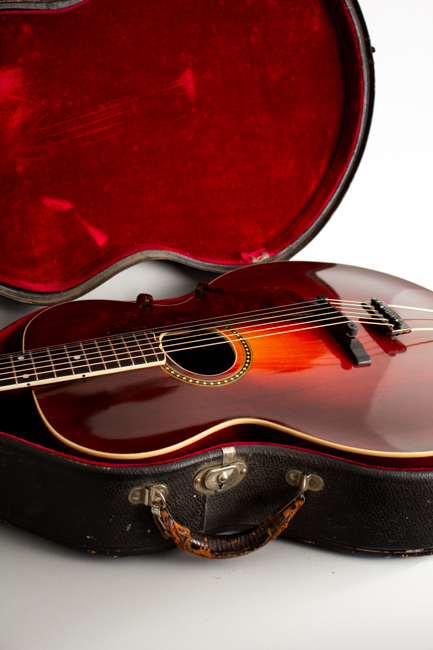 This is a stunningly well preserved L-4 from the just "pre- Loar era" at Gibson. For being about 105 years old it appears relatively little used and easily the nicest example from this period we have had. It also plays and sounds great (which not all of these do!) with a truly wonderful vibe. The factory order number indicates it was built in early/mid 1917 and the serial number suggests was shipped out fairly soon around the middle of the year, just as the US was entering the First World War.

The guitar is generally similar to earlier 1910s L-4's but feels just a bit sleeker overall, a streamlining process that accelerated when Master Loar joined the firm. The sunburst top finish is early Gibson varnish with a beautiful unfaded red/orange hue with a slightly darker, richer look than some examples. The back and sides are a deep cherry stain over the white birch. The top and back are single bound and the elaborate ring on the oval soundhole has delicate chain marquetry with a diamond pattern center strip. The carved spruce top is braced in a modified "H" pattern, worked mush thinned on this one than earlier examples we have seen.

The 3-piece laminated mahogany neck has a wide, deep "V" profile but does not feel as clunky as some, with a modern 1 11/16" nut width on the bound ebony fingerboard. A sharply slanted "The Gibson" pearl logo sits atop the single-bound peghead. The typical pre-1920's hardware includes Gibson's eccentric floating pin tailpiece bar, pickguard with two clamps at the edge and engraved plate Handel tuners. The original non-adjustable carved bridge is in the case, replaced with what appears to be an extremely fine replica of an early 1920s Gibson ebony adjustable bridge. The original can easily be re-installed if desired, though it is harder to tweak the setup in that case, obviously!

While the $150 L-4 was not Gibson's top-line guitar in 1917 only the Style U Harp Guitar and the elaborate Art Nouveau Style O exceeded it in price. The L-4's large 16" wide body was more conventionally shaped than either of those but with a carved top and back it was unlike any other guitar available at the time. Martins of this era were still firmly gut-string instruments, and the L-4's steel-string, arch-top power and punch was unique. Many early jazz greats used slightly later L-4s extensively into the late 1920s, including Eddie Lang and Freddy Guy with Duke Ellington's Orchestra.

The L-4 is usually Gibson's most conventionally accessible early guitar for the modern player, but this is an exceptionally good example in that regard. The neck is quite chunky but still feels slimmer than many, and the sound is the best we have ever heard from a pre-Loar example. It is both deeper and richer than expected (some 1910s Gibson archtops are quite lacking in this regard!) with considerable power. "It sounds like a real guitar" may seem like faint praise, but in this case is an indication of an particularly fine instrument of its type!

This guitar is in exceptionally fine original condition for being over 100 year old, and overall really shows comparatively little wear. The all-original varnish finish is still shiny with some scuffing and small dings and dents here and there but no major play wear. The only really notable wear down to the wood is on the back of the neck where there are some spots fully through the finish. The back center seam appears to have been neatly resealed beneath the heel, with no added finish. No other repairs are evident.

The guitar retains the original frets which have hardly any wear. Everything is original except as noted the bridge is an adjustable replica of Gibson's 1920s piece, to allow easy action djustment. This is a stunning period piece and a far more playable guitar than any other similar period l-4 we have seen, still housed in the original red-lined Gibson HSC. Excellent + Condition.
×