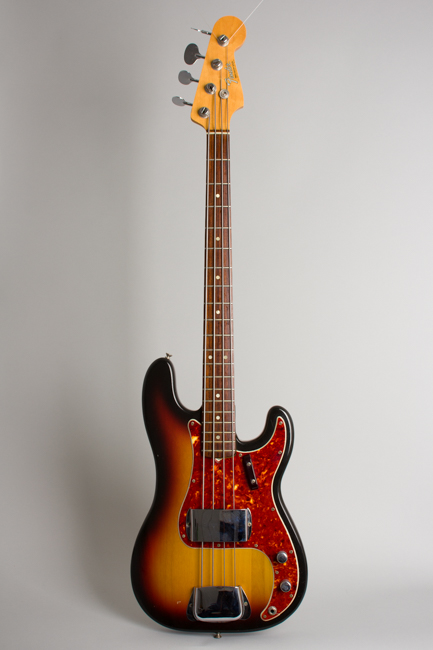 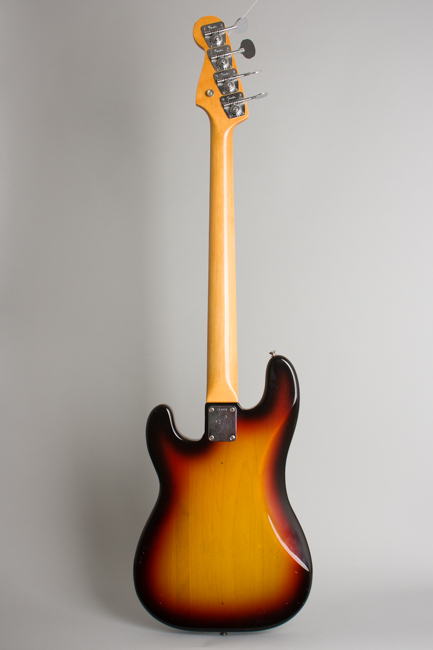 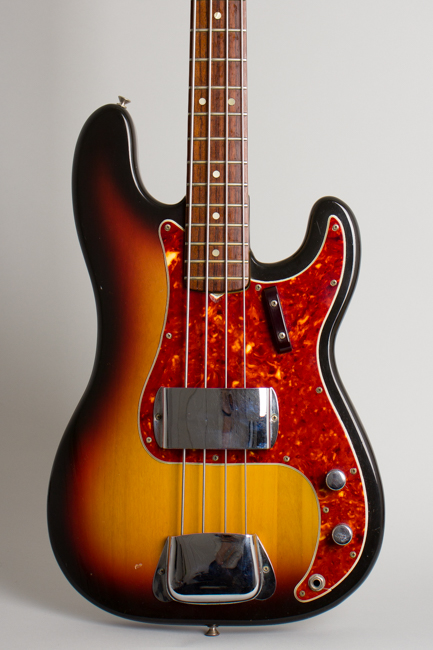 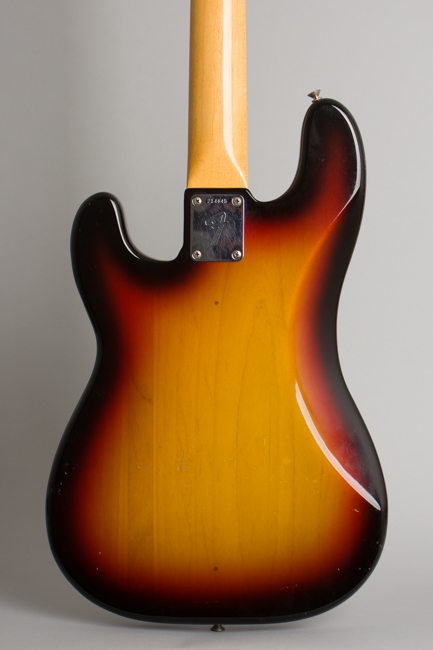 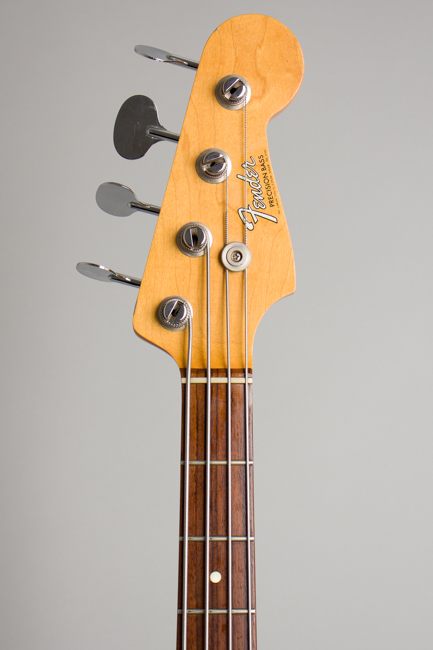 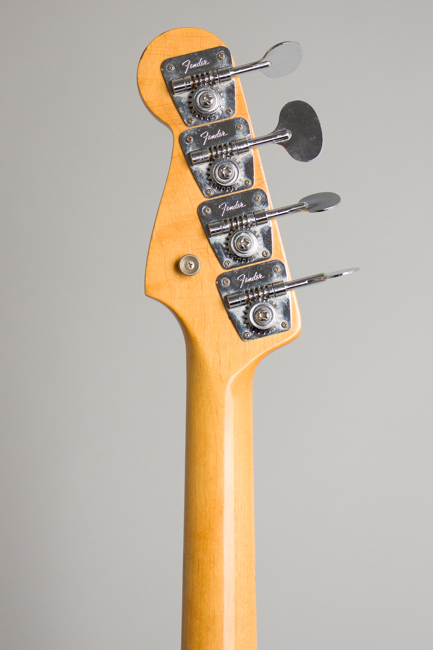 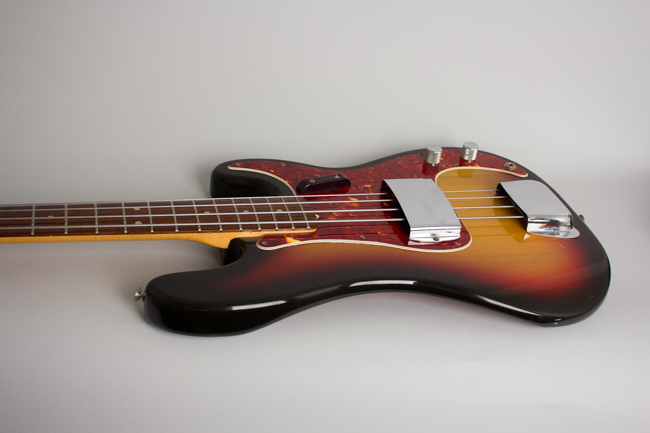 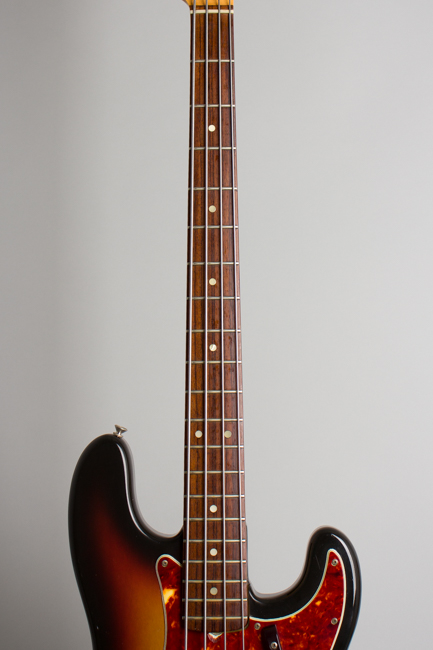 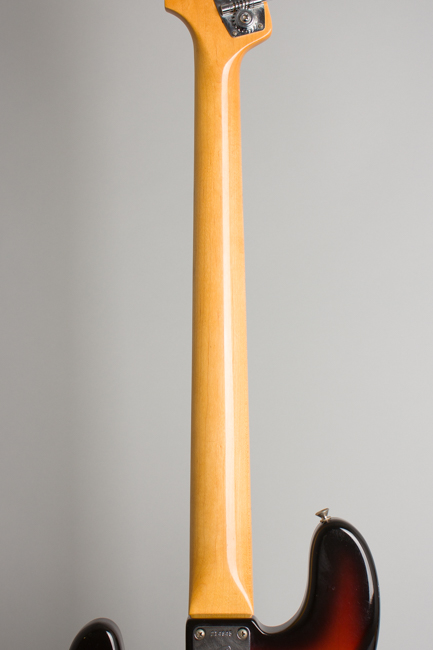 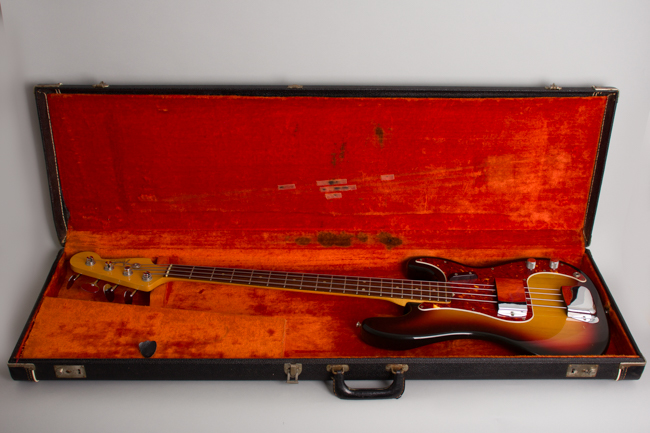 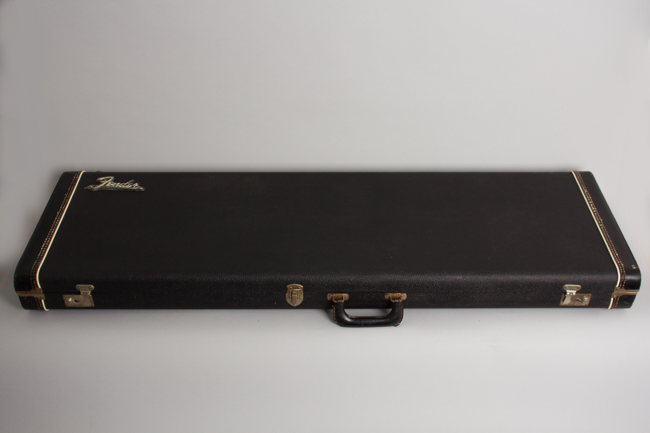 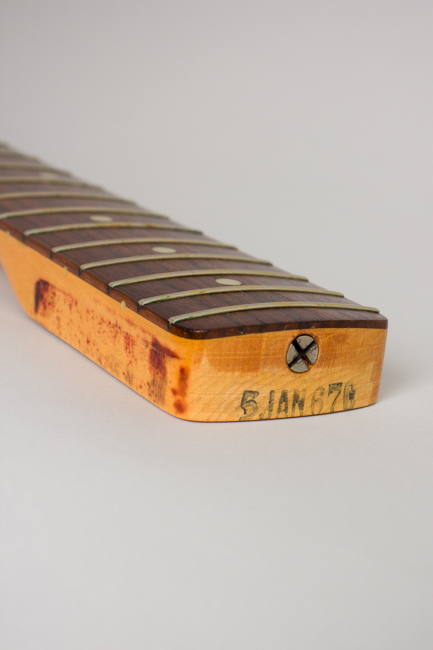 This is a very clean example of something we don't see too often, a Fender Precision Bass dated to 1967. We have handled a number of early CBS-era Fender Precision Bases dated to 1966, but oddly enough few from the following year. It may be that Fender sales did not get too many orders as the country headed into summer of love as dealers still had '66 models in stock; there was certainly no concurrent decrease in the numbers of people PLAYING Fender (and the world's) most popular professional electric bass.

The CBS Corporation had owned Fender for just two years when this bass was built; it shows some changes from the classic pre-CBS pattern but retains the feel of Leo's earlier instruments. The mix of features is specific to this period; the most notable oddity is the fitting of the first Fender-made "egg" tuners instead of the Familiar Klusons. These are common on Jazz and Mustang Basses from 1966-8 but for some reason rarely seen on Precisions. The whys of this are lost to history, but it is this bass' most notable visual identifier.

The maple neck has a thin-lam rosewood fingerboard with pearloid dot inlay and the newer somewhat larger frets, with the silver "transition" Fender logo decal on the headstock. The 3-ply tortoise pattern pickguard is the slightly thinner version adopted in 1965. The sunburst finish is slightly thicker than the year before; Fender was starting to experiment in this area but had not gone full-on Poly yet. The neck is still finished in the older thin lacquer that feels more comfortable to most players than the thicker Polyester finish Fender began using in 1968.

We snuck a look under the pickguard to verify the electronics are untouched, The visible pot date is 6631; Fender used 1966 pots well into 1970. The ink stamp on the heel of the neck is 5 JAN 67C, so this bass probably was assembled and sold in the spring of that year. Besides its good looks, at well under 9 Lbs. this is a superb handling and very resonant bass; an truly excellent player. We often find that later 1960s Precisions have a distinctive sound, a bit brighter than earlier versions and with a noticeable midrangey growl. This one is mellowed out a bit by the heavy Flatwound strings fitted and has a lovely tight but round sound that still cuts mightily with the high-end rolled up.

Many 1960s Fender basses have been gigged heavily for decades so finding one in this sort of condition -- appearing not too much played since new -- is a real treat. There is some minor checking and wear overall but no heavy finish loss. The body has some small dings and chips, with one noticeable dink in the face above the bridge and some marks on the lower side. The neck has only minimal wear on the edges and a bit of light checking on the headstock.

All hardware is original and complete, including both chrome covers. There is a small repair to the pickguard in the typical spot by the jack, very solidly done but visible. The bass shows no other repairs or alterations. The neck is in excellent condition with only some minimal wear to the original frets.

The bass is set up with a set of quite heavy green-silked flatwood strings, which really do the traditional tight and fat 1960's Precision sound, before Rotosound turned the world onto the roundwound thing. The original mute foam under the tailpiece cover has deteriorated away, but we'd be happy to add a fresh block if you want to go full 1967 Fire this one up and you're ready to ride the way-back machine to play the festival at Monterey, or the UFO club in London. Complete in its original Black Tolex Fender case, 55 years along this is a truly lovely find in a "CBS but still the bes'" Fender bass. Excellent Condition.
×