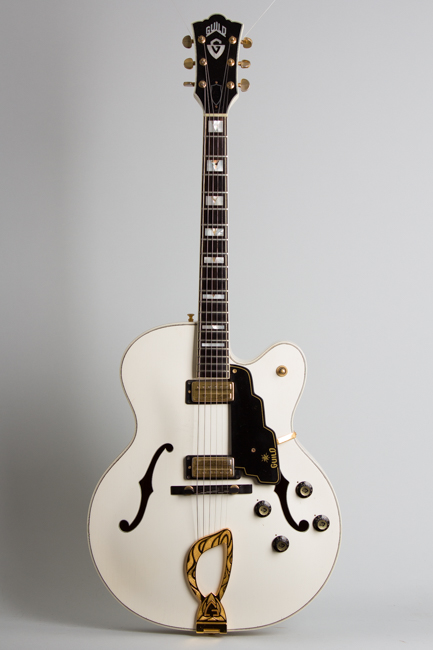 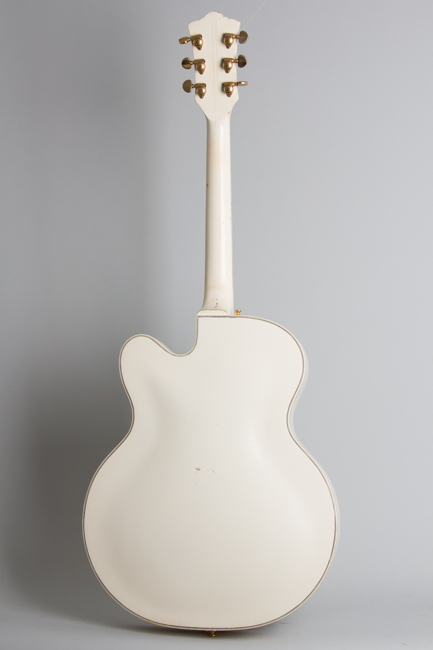 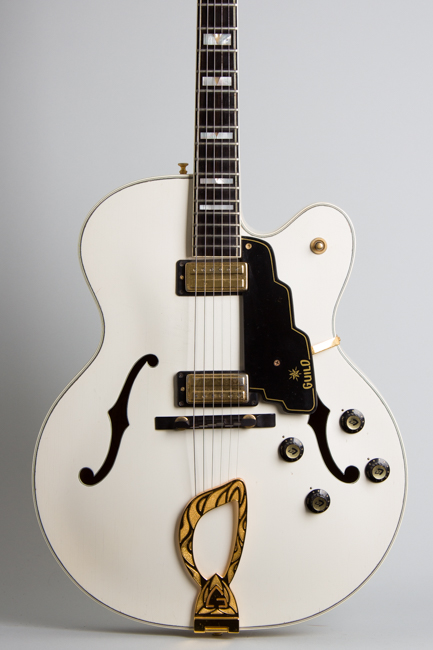 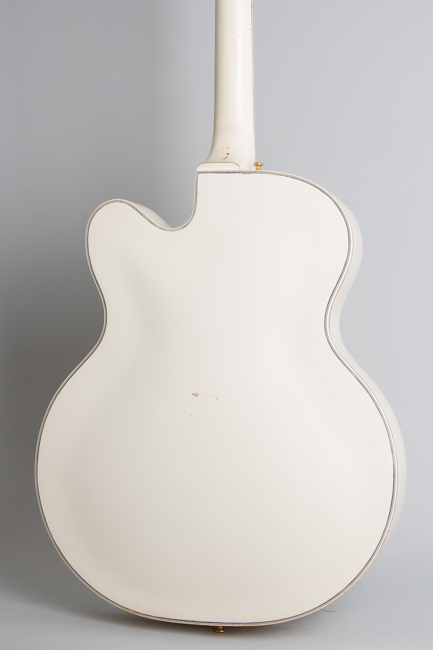 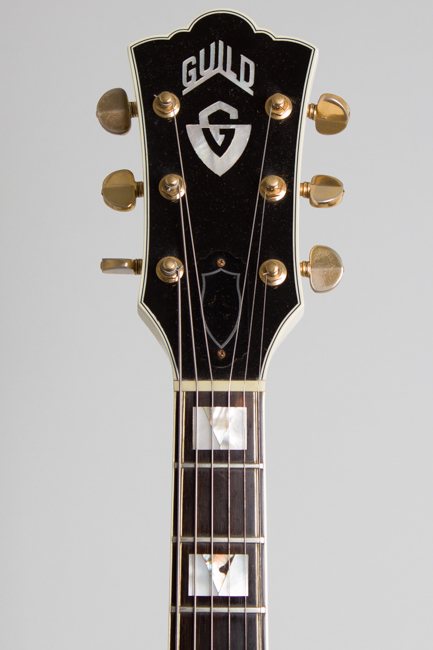 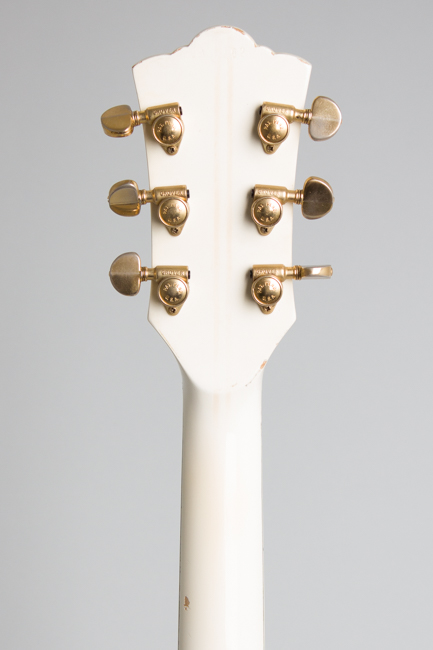 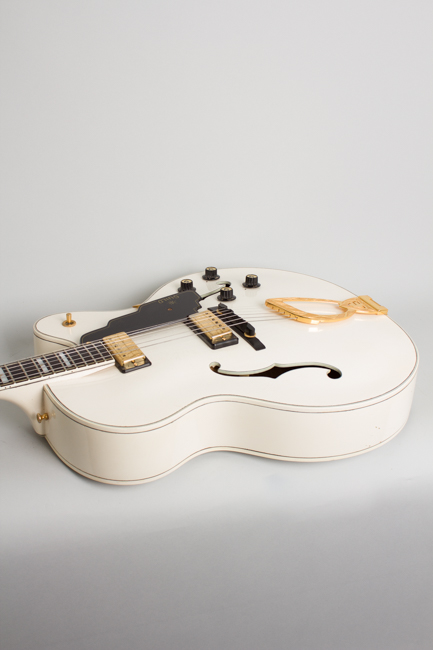 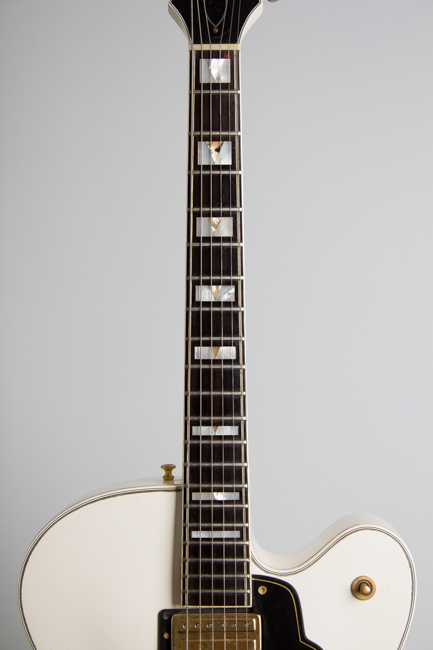 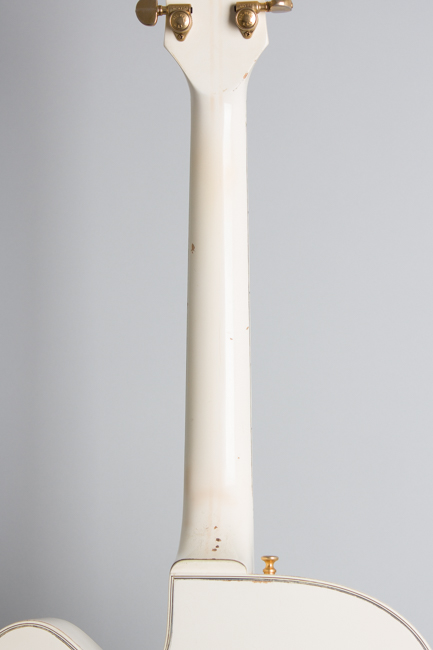 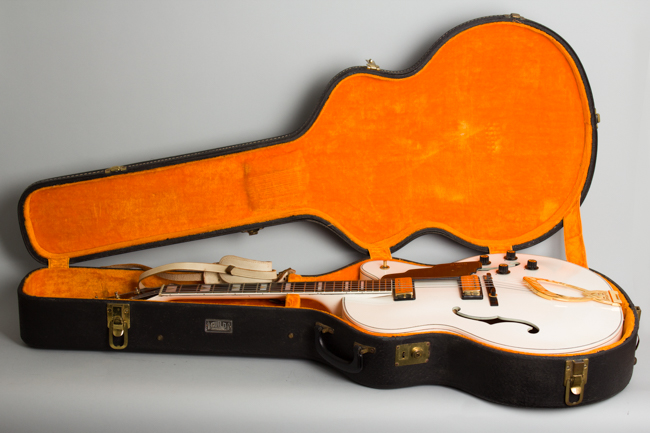 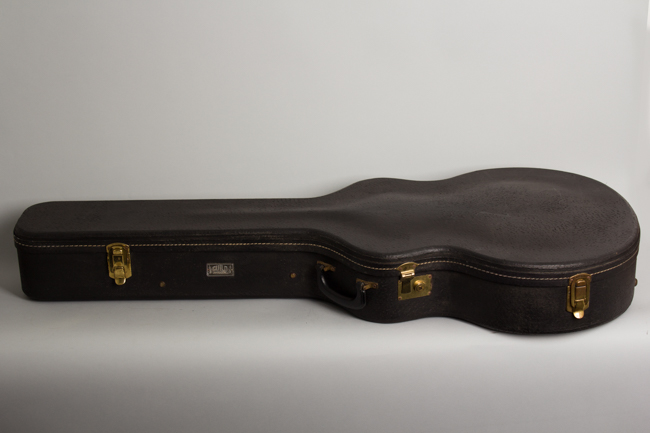 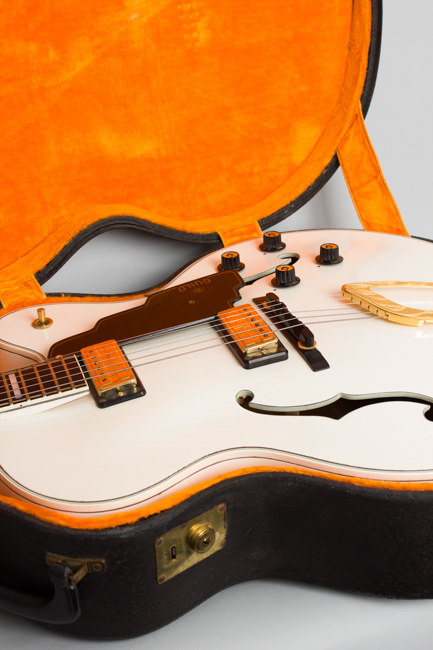 This is a really stunning custom (possibly one-off) example of Guild's high-end X-500 from early 1968 in a very unusual custom-ordered white finish. Custom color Guilds from this era are rare but not impossibly so, but this is the only example of this model in this finish we are aware of. When it was ordered in late 1967 this beautiful arctic-white showpiece would have cost a whopping $695 (plus $80 for the case) with an additional $20 upcharge added for the order for finishing in what Guild described as "other special colors" in the catalog.

Even in standard finish the X-500 was quite a fancy model for Guild in the 1960s, surpassed in the line only by the carved acoustic/electric Johnny Smith Artist Award. It was roughly equivalent to the Gibson L-5CES although built with laminated woods instead of the Gibson's fully carved top. The X-500 was intended to compete directly with Gibson and Gretsch's best offerings, with enough distinctive Guild touches to set it apart. This custom guitar is as close as Guild ever got to building a Gretsch White Falcon; even most Gretsch fans would allow that this is a more player-friendly instrument , if not QUITE as showy as the 1968 era Brooklyn Falcon.

The X-500 has the typical hallmarks of a high-end archtop electric, as top pro players would have expected. There is multiple binding on the body, neck and headstock; 5-ply on the top and back and 3-ply on the sides. The f-holes are bound as well. The single-bound ebony fingerboard has the elaborate split block Epiphone style inlay with multiple inset lines just inside the outer edge. All hardware is gold plated including the beautifully engraved deluxe Guild harp tailpiece.

The 17" body is made of laminated curly maple with a spruce top, while the neck shows its Epiphone ancestry with a 5-piece lamination down the back. The headstock is multi-bound on the face with an inlaid pearl Guild logo and G-shield centerpiece. The fittings are typical for Guild in 1968, with two of their in-house humbucking pickups, metal-capped plastic knobs and metal switch tip, and adjustable ebony bridge and back-painted Lucite pickguard. The tuners are Grover Rotomatics.

The X-500 represents Guild's finest fully electric arch top electric guitar and ranks with the best acoustic/electric guitars of the period. The sound is a bit brighter and less "electric" than some similar Gibson instruments from the 1960s, due mostly to the comparatively underwound and smaller-coil humbucking pickups. The guitar plays and handles extremely well, and aside from the fully carved Artist Award it remained Guild's most prestigious electric offering into the 1970s and beyond.

As a very expensive instrument the X-500 was only made in relatively small numbers. From 1965-69 less than 250 total were shipped; in 1968 the total was 55, of which only a handful at best would have had a non-standard finish; the jazz players it was aimed at tended to be a conservative lot. This all suggests this custom-ordered 1968 X-500 is an exceptionally rare guitar, possibly the only one ever made in this color and an extremely fine instrument; a true showpiece of any Guild collection as well as a super classy performance guitar.

Overall length is 42 in. (106.7 cm.), 17 in. (43.2 cm.) wide at lower bout, and 3 1/8 in. (7.9 cm.) in depth, measured at side of rim. Scale length is 24 3/4 in. (629 mm.). Width of nut is 1 11/16 in. (43 mm.).
This very well preserved guitar shows only a little wear overall, and really appears not much played over the last 50+ years. The finish shows some checking 9on the top, mostly) and some small dings, dents and scratches but overall still shines like it did when LBJ was in the White House. The beautiful solid white lacquer is totally original and unaltered. There are some small dings and dents most noticeably on the heel and one small patch of wear on the back.

The instrument shows no alterations or repairs. All hardware is original and the gold plating (often quickly subject to wear) is still overall very clean with some light wear. The frets and fingerboard show hardly any wear at all. This unique and exceptionally rare Guild full-body guitar is a wonderful playing instrument, with a unique tone and distinctive character. While often pigeonholed as a "jazz" guitar this X-500 is a showstopper that would look and sound great in just about any context; well probably not through a 100 watt Marshall, but at reasonable volume levels anyway! It is still in the original Guild HSC with a period 1968 Guild catalog, late 1967 pricelist (as it would have been ordered from) some vintage Guild picks and a period white leather strap. Overall Excellent Condition.
×