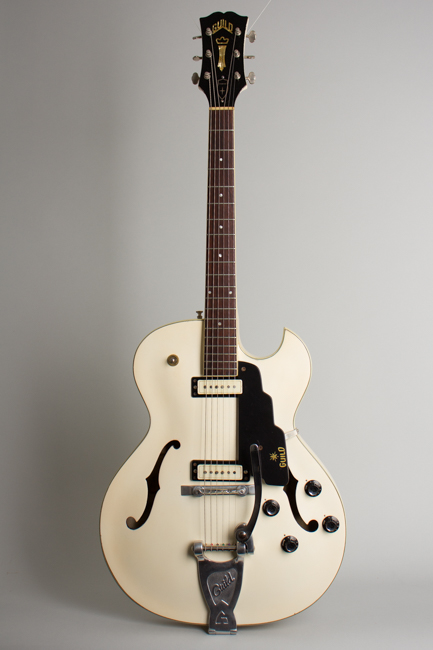 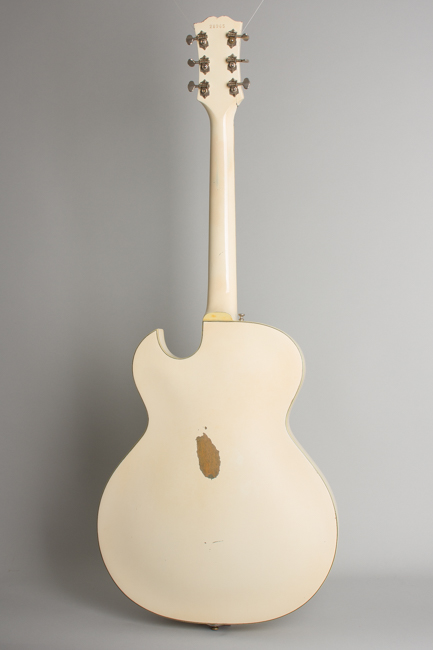 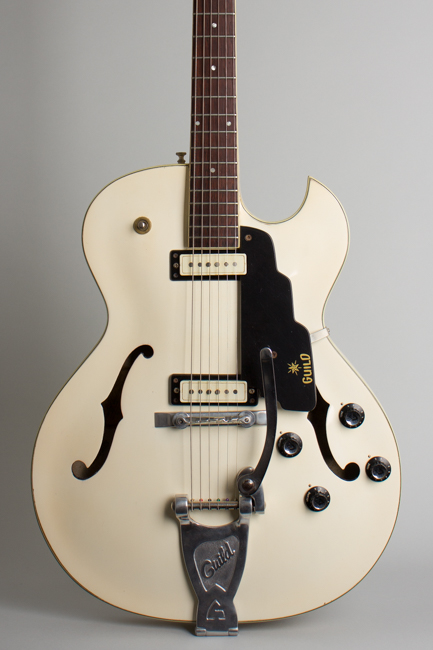 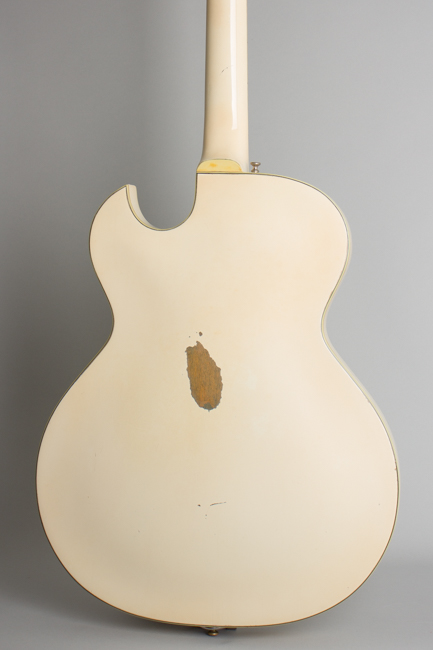 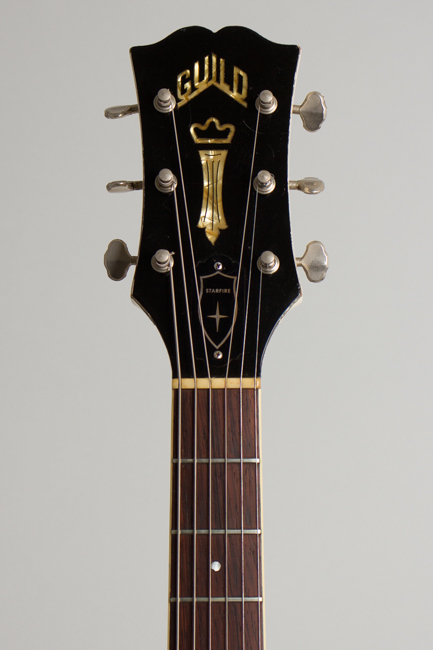 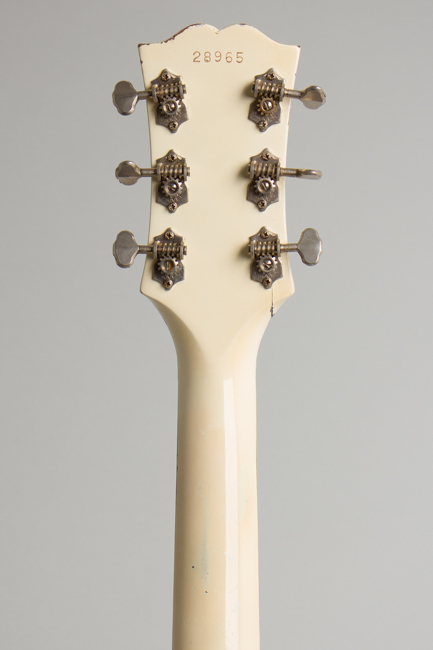 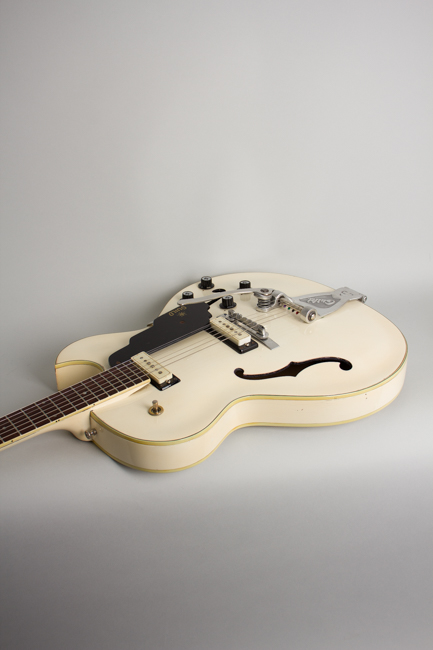 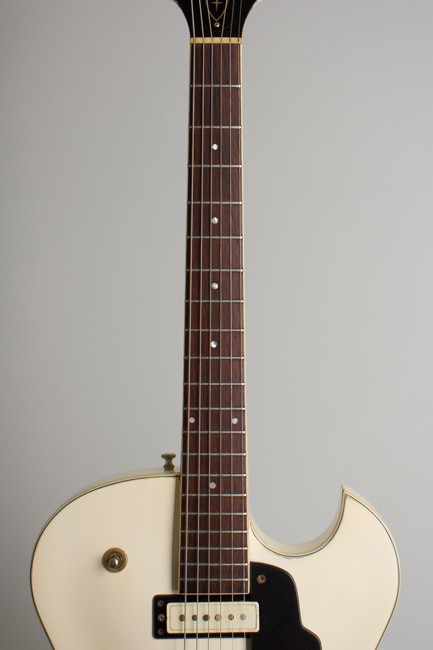 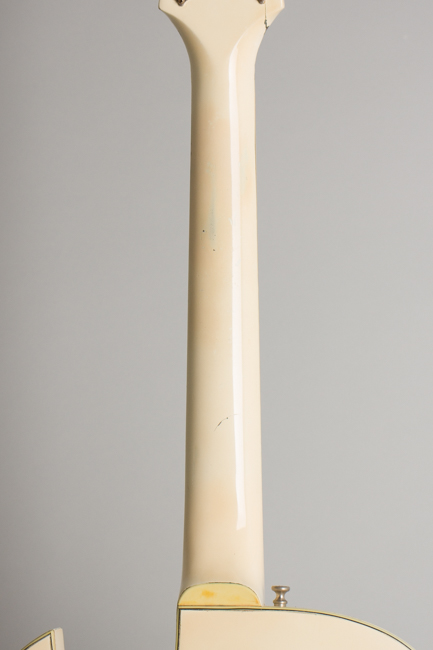 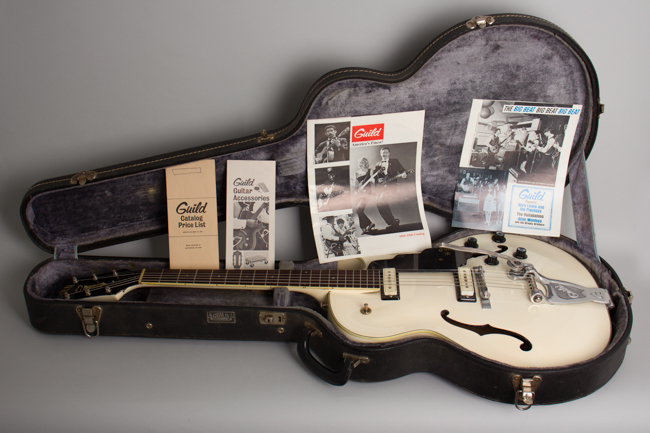 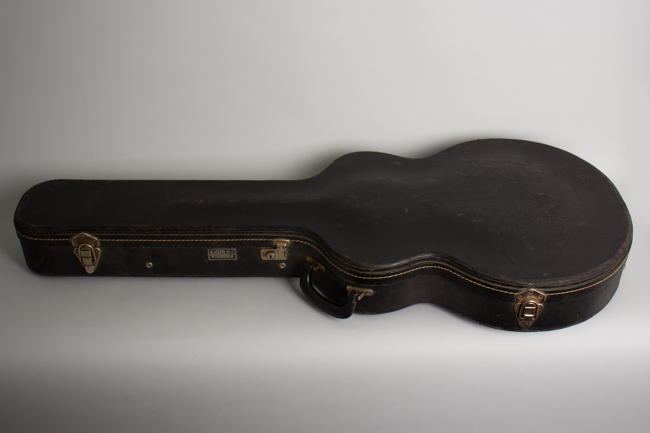 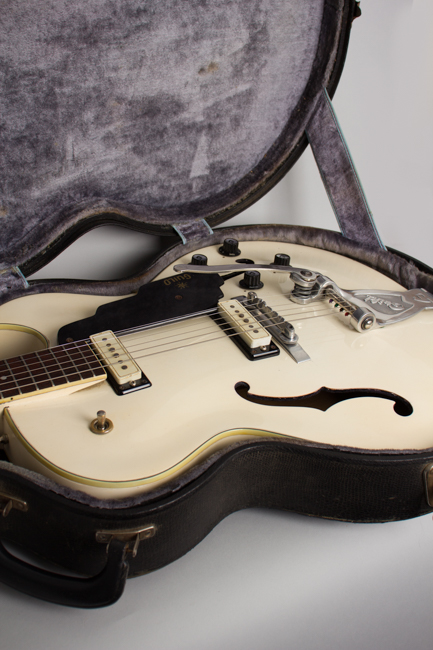 This stunning Starfire III is one of the rarest Guild guitars we have ever seen, with a solid white finish on the body and neck and mounting a style of single coil pickups not generally seen on Starfires. This guitar dates to the early days of 1964 and would almost certainly have been a custom ordered instrument, likely one of a kind. Starfires were offered in several custom colors in addition to the standard cherry or sunburst, but solid white was not one of them. While not unknown this livery is extremely unusual and only a handful of all-white Guilds from the 1960s are known to exist.

The solid white lacquer finish is applied over what appears to be an Ebony Grain finish undercoat; this would have been one way to clear out a flawed earlier finish job! The open-book style headstock is typical of Starfires from earlier than 1964; the headstock and label bear a serial number dating to the beginning of '64. The model designation is handwritten as "Starfire III-White"; Guild almost always helpfully indicated the original finish on 1960's labels! "Special" is stamped in black ink on the interior under the upper f-hole as well. It is possible the guitar was actually finished out later than the serial number would otherwise indicate, as a way for the factory to gainfully use an uncompleted instrument with a flawed finish.

An even stranger feature of this guitar is the pickup rig; these thin-coil plastic encased units (nicknamed at the factory the "Mickey Mouse pickup") were used on the S-200 Thunderbird soildbody starting in 1965 and also on some T-100's and M-65's but were never used on Starfires as a stock item. This guitar was only ever routed for these particular pickups, the body has no other marks or signs of other routing. Whether this guitar represents an early experiment in their use or custom order is impossible to tell.

Other features more typical for 1964 include the back-painted Lucite pickguard, stair-stepped on the outer edge with gold Guild logo and star emblem, Grover Sta-tite tuners, black "G-logo" knobs and the Guild logo harp-shaped Bigsby tailpiece introduced in 1961. This is a unique Starfire sonically as well as visually, although the generally similar T-100 used the single-coil units later on this guitar has its own voice, brighter than the contemporary Guild-anti-hum equipped Starfires.

With its stark tuxedo livery this is a super classy and extremely striking looking thin-body electric, a particularly unusual example of one of Guild's finest designs. This is about as rare as 60s Guilds get, if not one-of-a-kind then close to it. As an interesting footnote, either this or an absolutely identical guitar appears in the single known photograph of an all-girl band from Islip, New York called the Simple Noize. Whatever it's history, this is a wonderful and fascinating instrument and compared to period Gibson or Gretsch models this extremely striking instrument is still a rather undervalued guitar.

This guitar remains all original and in generally very well preserved condition, showing signs of play but no really serious wear except some belt-buckling on the back. There is some finish chipping on the body edges and around the headstock (mostly adjacent to the plastic veneer) but the still-gleaming white lacquer is otherwise quite clean except the one larger wear through the lacquer spot on the back and a few other scuffs and scratches. There is a small separation to the headstock wing joint below the low "E" tuner, firmly glued up but not touched up so it is plainly visible.

The hardware appears all original and in generally excellent condition. The aluminum Bigsby bridge saddle has been very cleanly notched deeper than normal; this is so neatly done it may be factory work but is more likely a later job. The retaining ring on the switch appears to have had the plating buffed down to the metal. Why we can't say. Otherwise there are no apparent alterations to the instrument.

This special guitar is an excellent player with a very good neck angle for a '60s guild. It offers a brighter sound than most similar thinline hollowbody guitars, due to the rather Fender-like single coil pickups. This is a truly unique instrument, both in looks and sonic character. It includes a the original Guild thinline case and a passel of really neat period Guild catalog paper. Overall Excellent Condition.
×