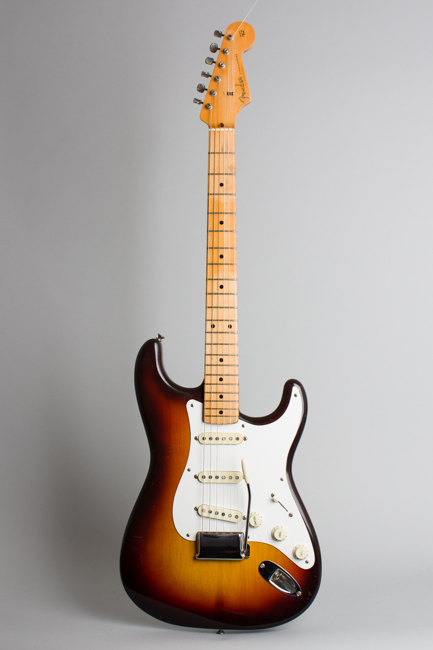 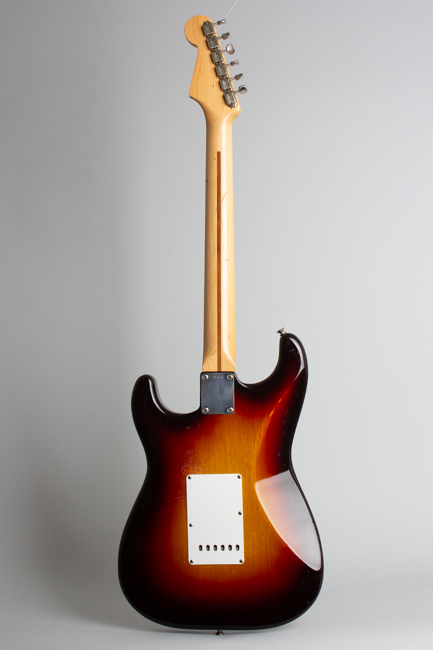 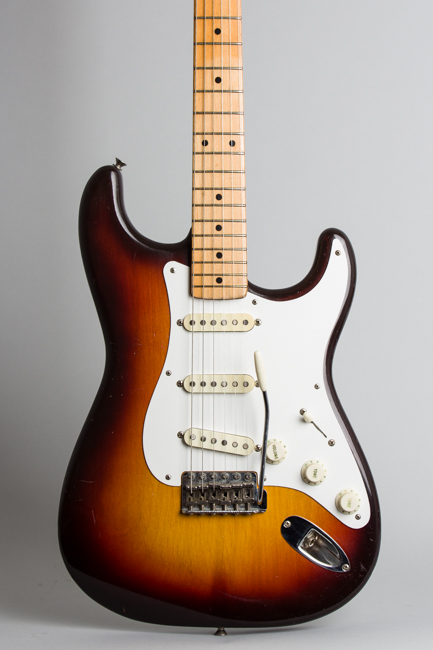 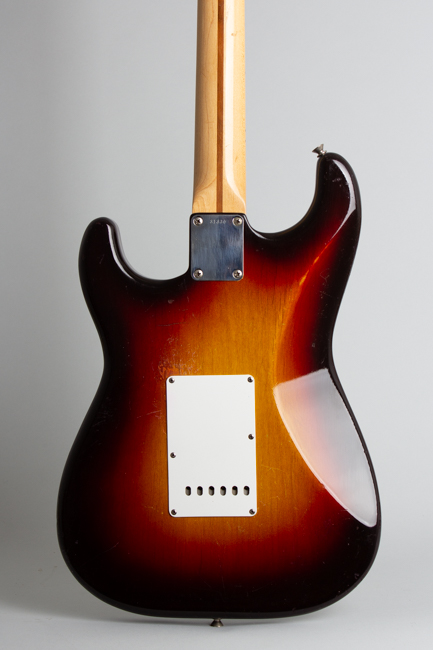 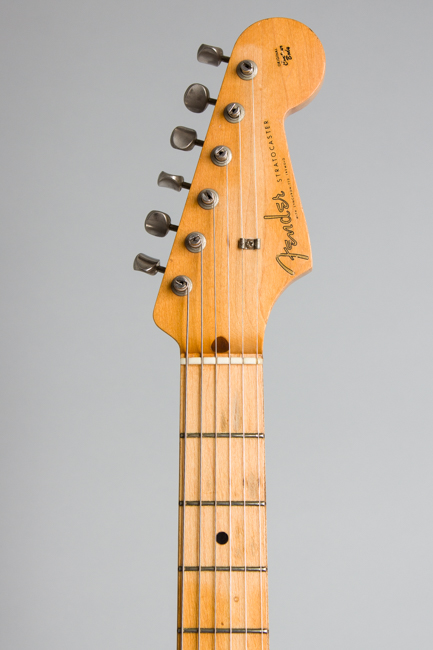 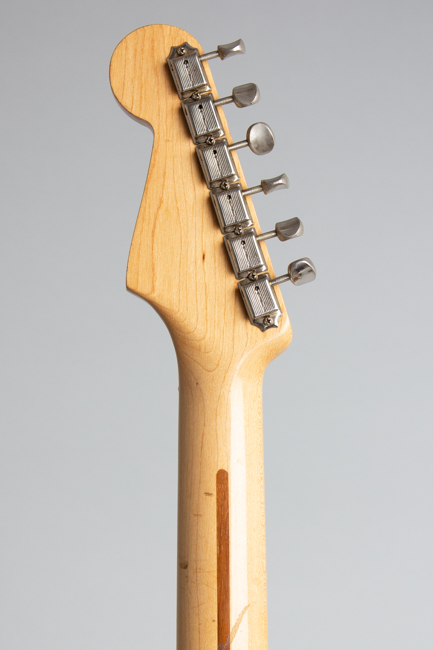 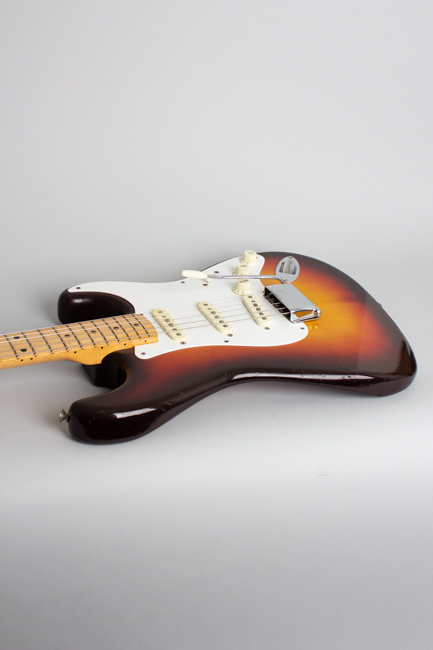 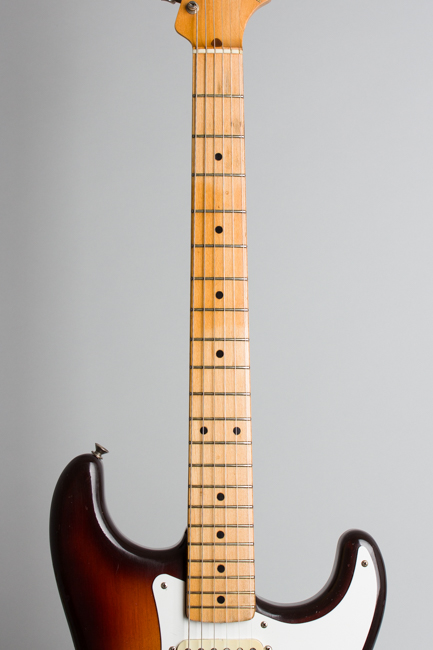 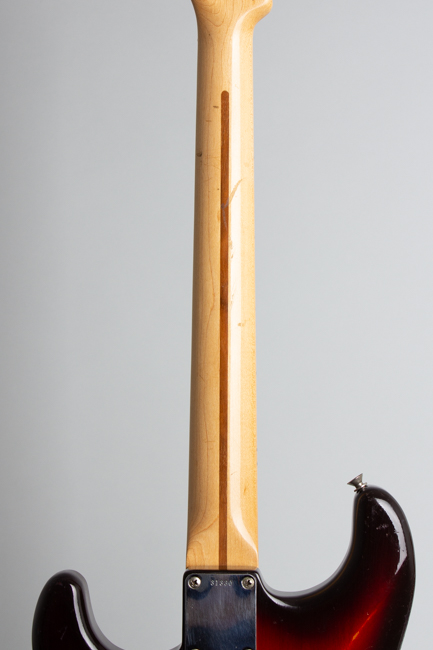 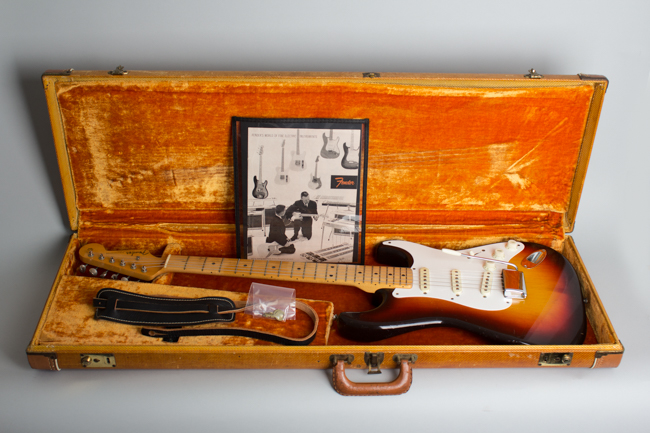 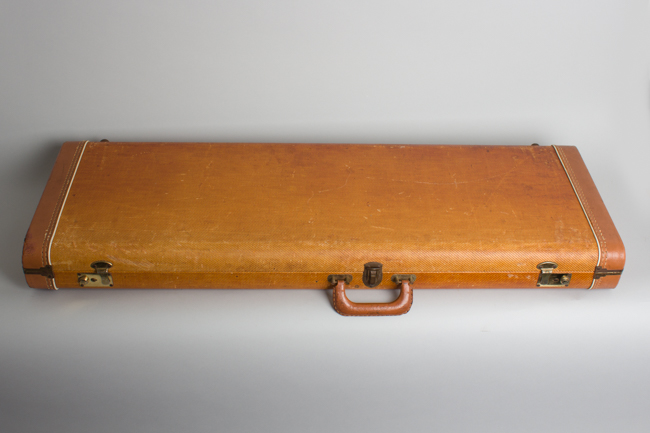 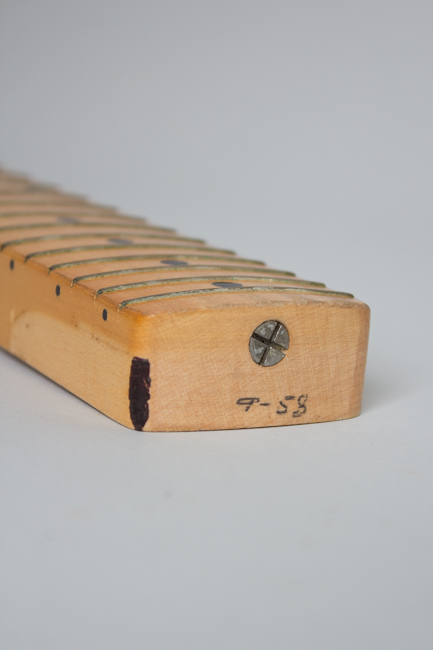 This superbly clean Stratocaster dates to the latter part of 1958, several years after the model's introduction but a time when it was still the most futuristic fretted instrument on the market and a showpiece for Fender, JUST before the Jazzmaster made its debut. The body sports the recently introduced 3-color sunburst lacquer finish which added a red layer to the previously more staid two-tone brown livery. This body is dated 7-58 in the center pickup cavity; the great-feeling round-profile neck is pencil dated 9-58, some months after the 1956-7 "V" profile was superseded by this more subtle shaping.

Both externally and "Under the hood" all is original including a beautiful matched set of pots date coded to the 25th week of '58. The pickups, wiring and solder joints remain original. All three pickups sound great, with the typical '58 shimmer and "quack" and the three-way switch has a very solid feel selecting the "in-between" tones easily.

This guitar has apparently seen relatively little use but over the past 60+ years managing to avoid the indignities that many old Fenders went through like refinishes, humbucker routs, jumbo refrets, and locking tremolos. It remains exactly as Leo and his crew intended, a versatile tone machine par excellence. It is simply a wonderful-feeling 7.74 Lb. guitar (with the bridge cover on) and a great reminder why the world fell in love with the Stratocaster in the first place!

This is a beautifully preserved (as well as fine-playing and sounding) nearly 65 year old Stratocaster with some fairly typical light wear but original no alterations or repairs. Well into the 21st century it is increasingly rare to fine completely original unaltered 1950s guitars like this one. The three-tone body finish shows less fade than many, with a strong but subtle red layer off the yellowish center. The untouched original finish has small dings, scrapes, and dents; most noticeably to the back with the deepest just off the edge of the trem cover. There is a scuff mark from the trem arm being rotated across the lower face, not too obvious but visible.

The clear lacquer on the neck retains its original lighter color, not ambered or "smoked' appreciably and remains relatively clean with relatively minor wear to the fingerboard mostly in the first "Cowboy Chord" position. The body end of the fingerboard shows some fairly light strum wear through the thin lacquer. The back of the neck has some small dings and dents, with one noticeable scrape in the center behind the 3rd-4th fret position. The headstock decal shows a few minor dinks to the "Fender" and "Contour body" sections but is for the most part still intact; there appears to be some tiny touchups to the "F" but this is inconspicuous at best.

The hardware and fittings are all original and complete including the Kluson tuners, pickups, switch, tone pots with "Chicklet" capacitor, single layer white pickguard, bridge, and saddles even the bridge cover, trem arm and back cover, which has a tiny split at one screw hole. The original white plastic pickup covers and knobs have less of a yellowed patina than many; this guitar was probably never played in a smoky environment as many were. There is some light corrosion on the trem arm and even less on the saddles and screws.

Internally even the masking tape intact on the pickup leads, as far as we can see nothing has ever been disturbed under the pickguard. The solder joint on the volume pot is not as neat as the rest, but we have seen this a lot as it was done then the guitar was assembled, not at the bench when the guard itself was wired up. All three pickups are well balanced with a strong output and sound great, with some truly sublime "in between" Strat tones available from the easy-to-lodge original 3-way switch.

The small-wore frets are original as well, showing light wear in the first positions and not much beyond. Based on the (relative lack of) fingerboard wear we would assume the guitar was simply not played that much beyond E, D, C, and G chords "back inna day". This is simply an excellent-playing and sounding Stratocaster with a slightly less "glassy" tone than some '58s and a particularly nicely pickup. It has a killer vibe, and resides in its original tweed case with the original (or at least period) Fender strap, case keys and a copy of the '58 small Fender catalog. Excellent + Condition.
×