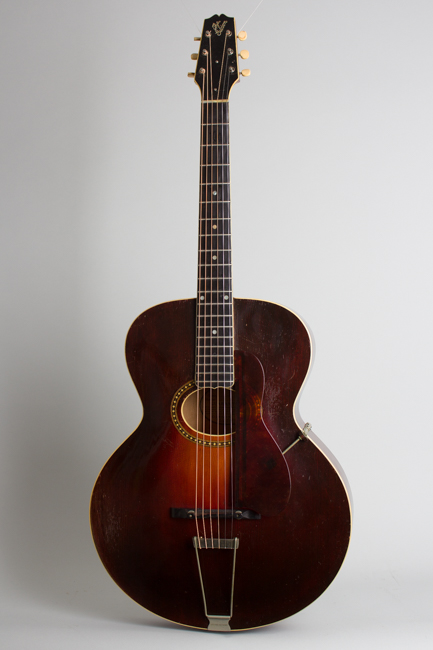 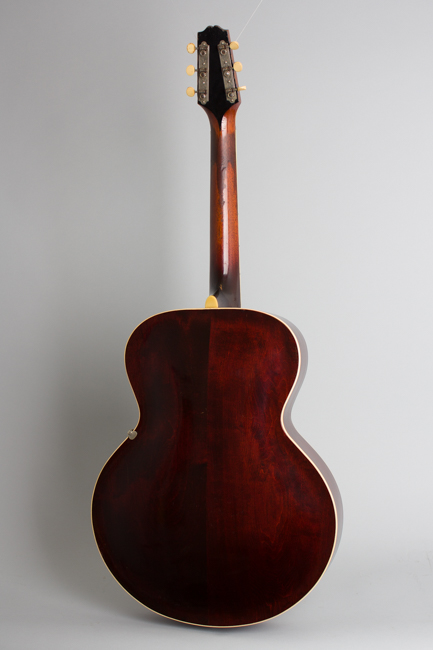 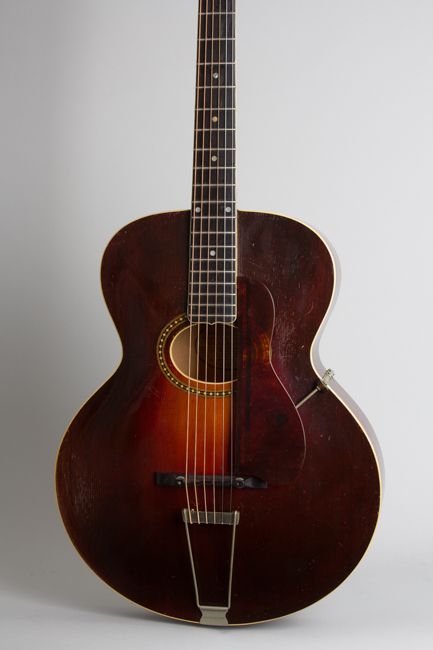 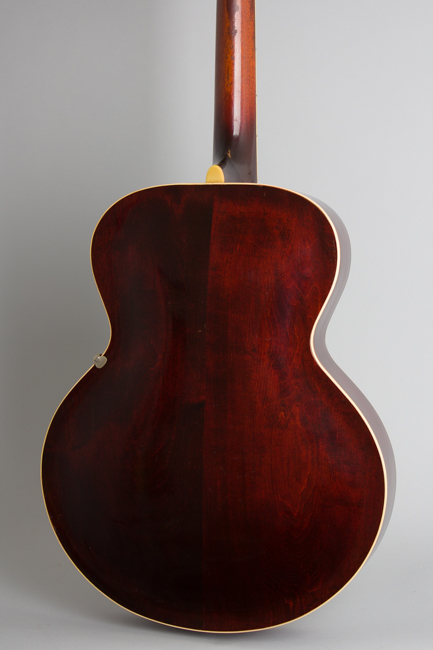 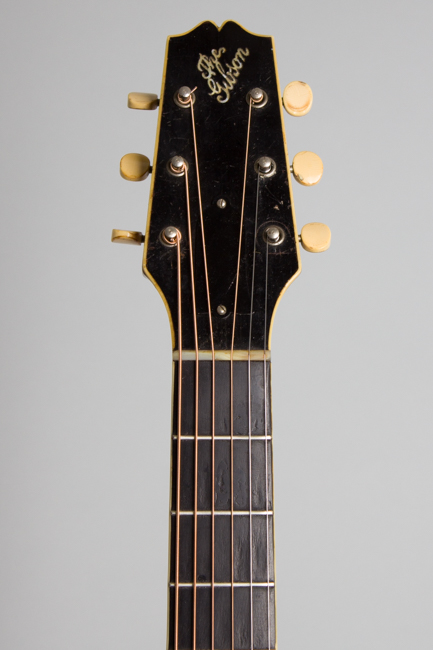 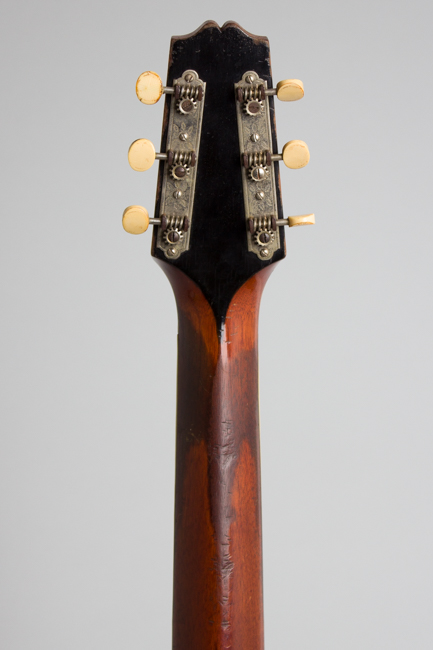 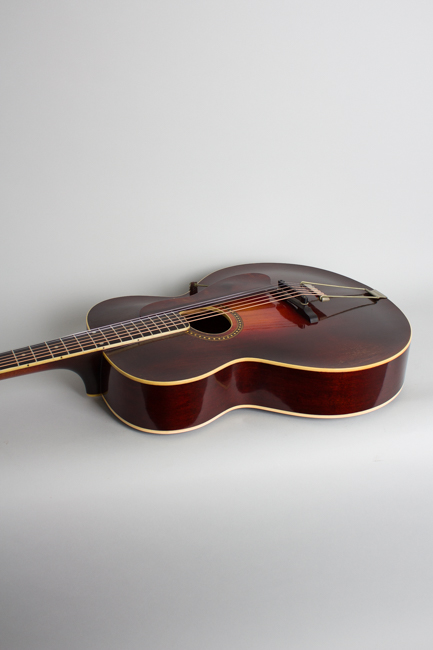 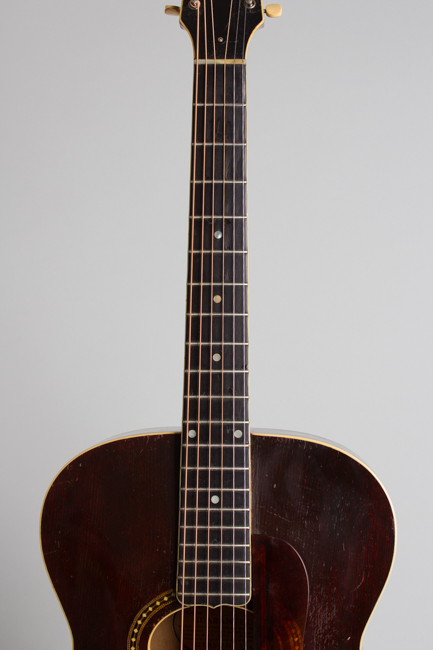 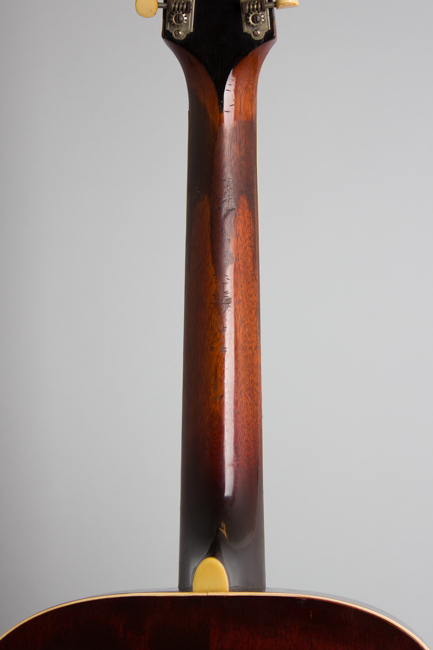 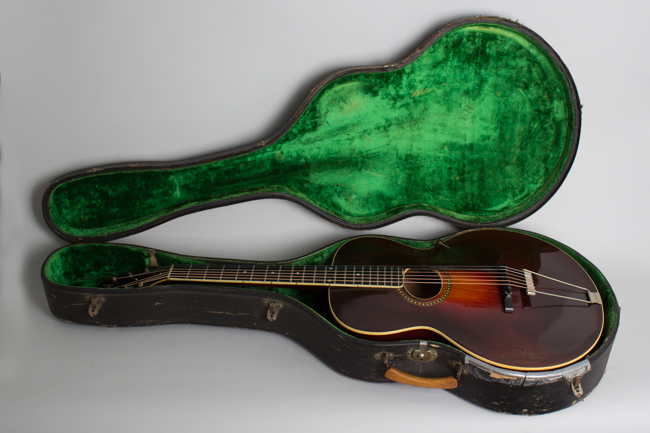 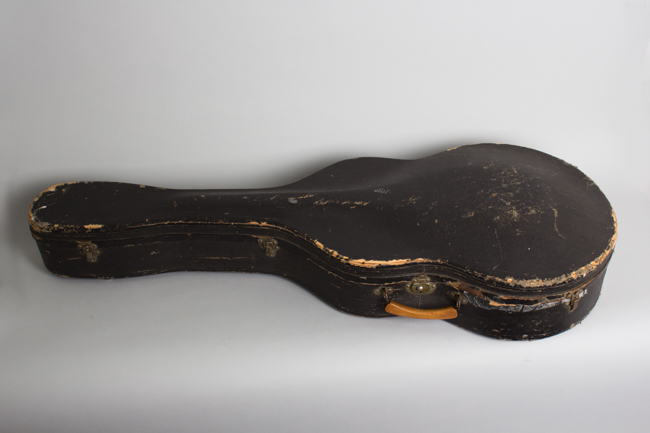 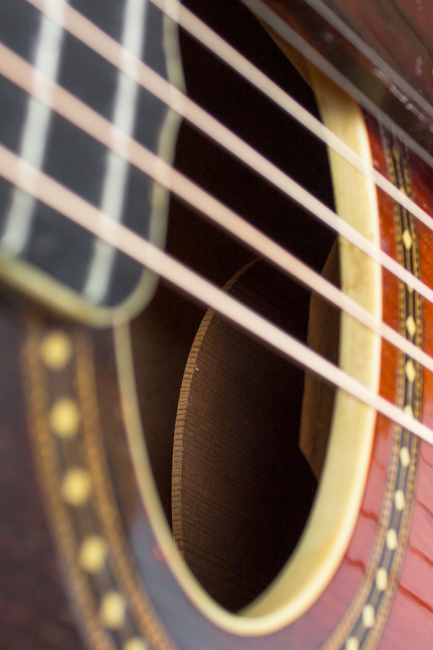 This is a very interesting, quite rare, and mostly just way cool carved-top guitar -- a "snakehead" L-4 from the just-post "Lloyd Loar Era" at Gibson. It has seen some use over the past 95 or so years but still plays and sounds great with a wonderful vibe. The factory order number (8099) indicates it was built in mid/late 1925, soon after "Master Loar" left the building. The serial number on the white label suggests was shipped out in early-mid 1926.

The guitar is generally similar to earlier L-4's but with a number of notable changes. The sunburst finish is early Gibson lacquer (they transitioned from varnish right around this time) and has a darker, richer look than earlier examples. It features a newly introduced slimmer soft "V" profile neck, much more comfortable than the earlier wide, super chunky deep "V" design. It also benefits from several "Modern" Gibson features introduced in the 1920's including the adjustable ebony bridge, adjustable truss rod and solid tailpiece bar in place of the earlier celluloid pin variant. The sharply slanted "The Gibson" logo sits on its single-bound "snakehead" peghead above the then-new truss rod cover. This slimmer peghead is a rare feature on the L-4 seen only in this particular time; both earlier and later examples have the wider traditional Gibson shape. The wide oval sound hole is still in the older style, bound on the edge and bordered with an elaborate diamond marquetry motif.

This instrument includes one of Loar's most oddball obsessions, the "Virzi Tone Producer", mounted under the top. This device was marketed by Virzi Bros. violin company in New York and is flat thin spruce disc suspended beneath the top beneath the bridge. It was claimed to enhance soundwave vibrations in the tone chamber, supposedly enhancing harmonic partials. Championed by Loar, it was offered by Gibson as an optional extra cost feature at the time. The Virzi was mostly seen in the expensive Gibson Master Model mandolins, and it is very uncommon to find one in an L-4, especially one built after his departure. This is the second L-4 from this same FON batch we have seen with a Virzi installed; perhaps Gibson was using up their stock!

While the $150 L-4 was not Gibson's top-line guitar in 1925 only the Style U Harp Guitar and new-for-1924 Master Model L-5 exceeded it in price. With a large 16" wide body and carved top and back, it was unlike any other guitar available at the time. Martins of this era were just transitioning from gut-string instruments, and the L-4's combination of steel-string power and punch was unique. Many early jazz greats used similar L-4s extensively into the late 1920s, including Eddie Lang and Freddy Guy with Duke Ellington's Orchestra. Besides being something of a rarity, this Loar-style L-4 is a powerful-sounding guitar with a big open tone compared to earlier Gibsons.

This guitar has definitely been played but remains in fine playing original condition for being almost 100 years old. It shows some typical wear and tear overall but no major damage or repair work. The original lacquer finish has light checking mostly on the top, with small dings, dents and scrapes overall. The top has some pick wear below the bottom edge of the pickguard and a typical armwear spot worn through the finish where one would expect it. The headstock shows some dings and dents but nothing too serious.

The only large area of finish wear down to the wood is on the back of the neck; there is a fairly deep but worn-smooth capo dent behind the second fret, some shallow dinks behind the next few frets and some very old light overspray to the finish, which is mostly worn off again. There are no cracks anywhere on the instrument; there is a small visible grain check off the bass side of the fingerboard that does not go through the wood. The guitar was refretted (it looks like some time ago) with more modern crown wire that still retains a vintage feel. The ebony fingerboard shows some visible scars from this process but nothing that effects play; the original pearl nut is still intact.

All hardware remains original including the elevated pickguard still with the old 1910's clamp, the engraved strip tuners with ivoroid buttons and the then-new (and much superior) metal bar "string over" tailpiece. The "turnover" saddle on the original adjustable bridge has been undercut so the "Hawaiian" underside section is removed; it is fully adjustable up or down and the action is excellent. This is a really fine playing and sounding L-4, a lovely period piece from absolutely the finest era, still housed in the original Gibson HSC that also fits an L-5. This case is solid if well-worn with an ancient and very nicely made wooden replacement handle. Overall Excellent - Condition.
×