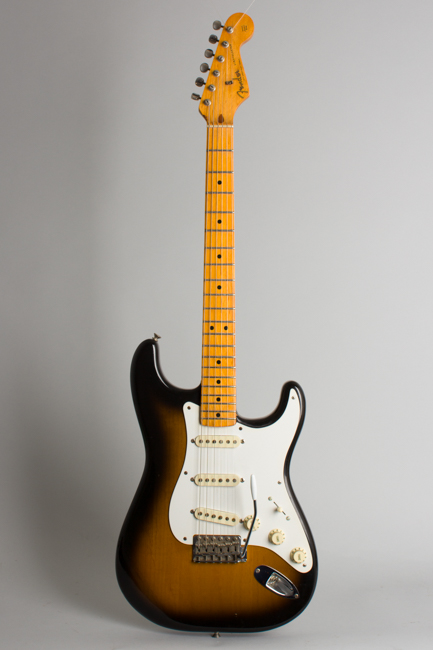 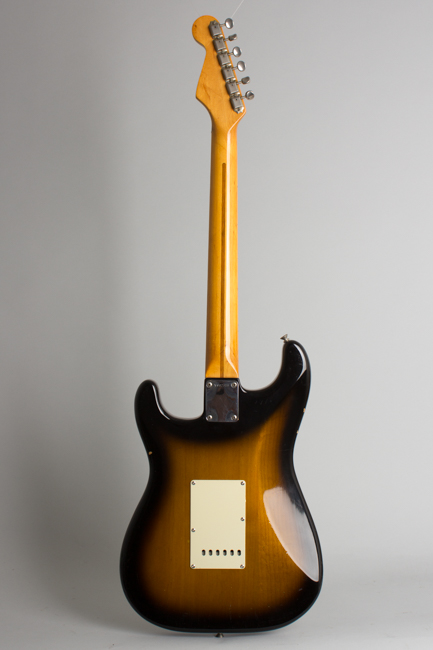 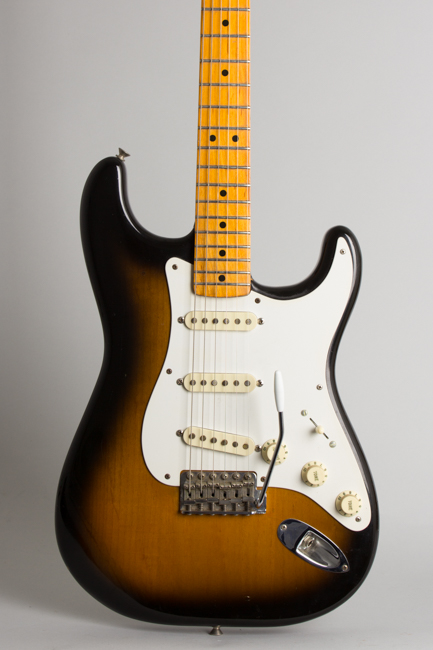 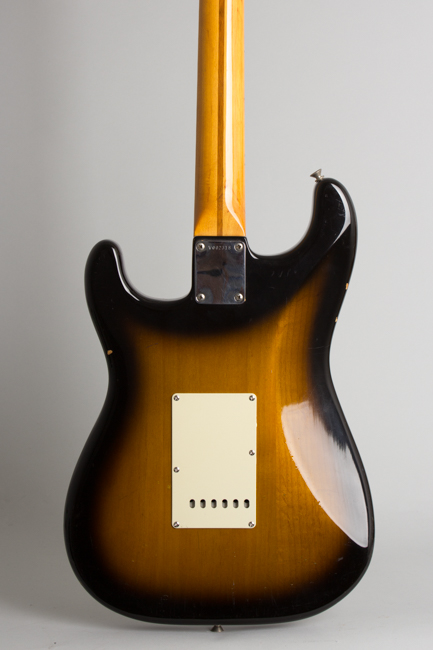 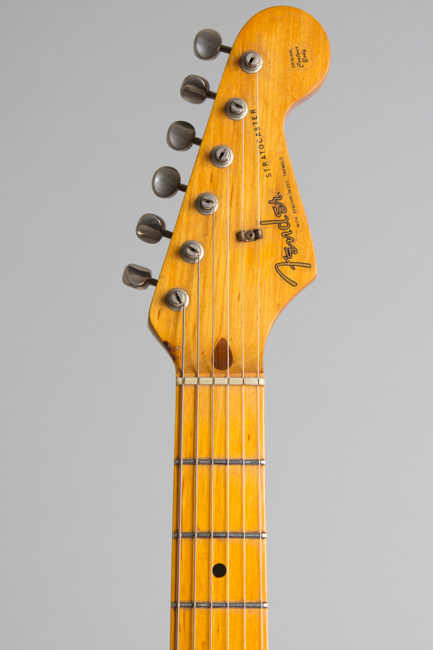 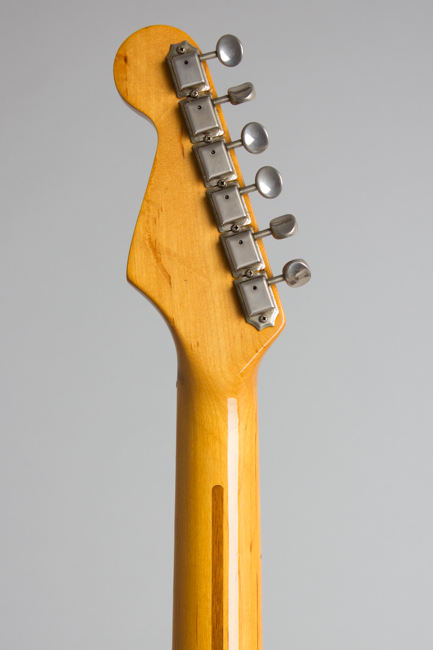 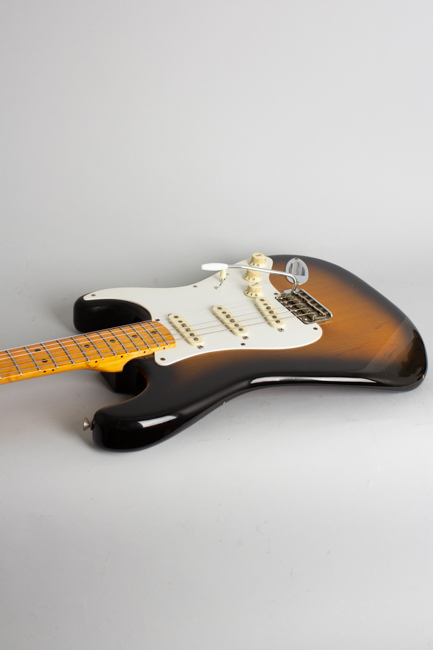 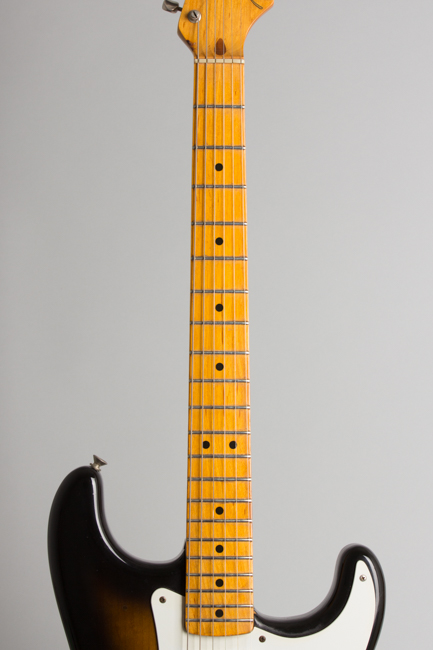 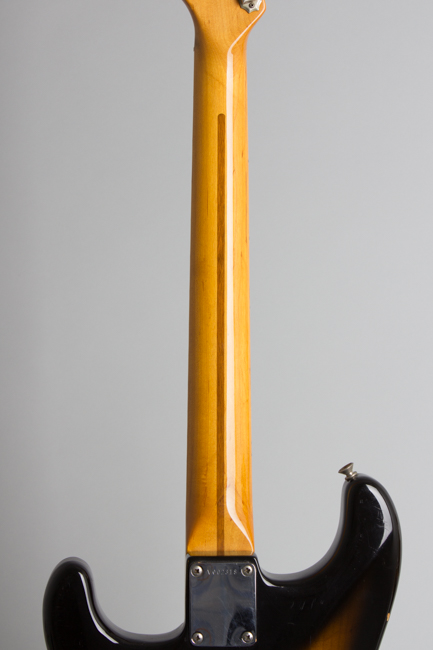 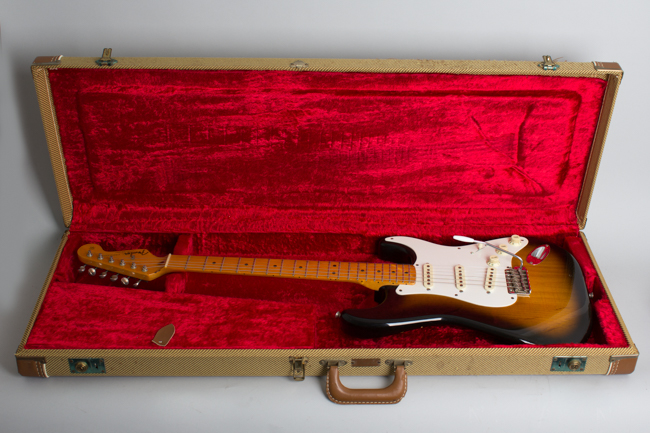 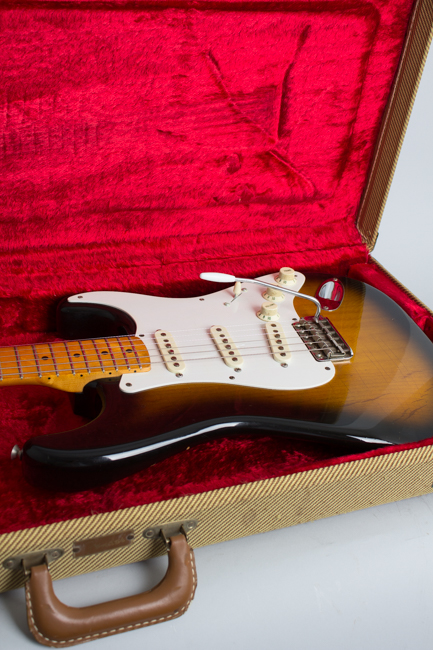 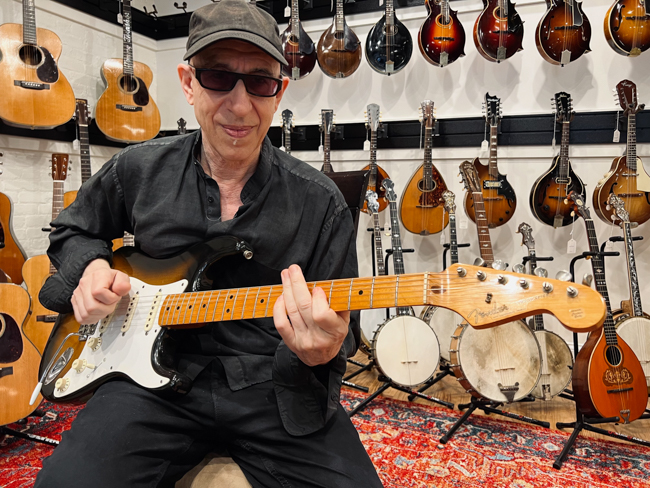 This is a cool and very early example of the first 1982 Fender '57 Stratocaster reissue, owned for decades by multi-faceted NYC guitar maven/composer Elliott Sharp. He told us this guitar "Really got that Otis Rush Cobra Records sound on the first Terraplane album". It was played by Elliott on most of that eponymous debut Terraplane album on Homestead Records as well as later Terraplane albums and recordings by Mofungo, Semantics, Wayne Horvitz, The President and more.

Apart from this provenance, these early American Re-issue Fenders have become collectible in their own right. By the early 1980s criticism from musicians that the CBS/Fender had long been sacrificing quality for profitability had begun to sink in. A group of Fender executives initiated a project re-issuing selected older models to prove that they could achieve a return to pre-CBS quality. This set of Fenders were carefully made reproductions of 1950s and '60s classics produced in the original Fullerton, California production facility. These Fullerton-made instruments have become quite sought after in the years since and are known by the collector's acronym -- "AVRI" for "American Vintage Re Issue".

While these early 1980's guitars are not EXACTLY accurate re-creations, but are far closer than anything Fender had built since 1966 to Leo's original creations. The Fullerton reissue era was very brief and lasted only from 1982-84, as then Fender was sold off by CBS and moved to a new Corona, CA factory in 1985. The Fullerton guitars -- made on some of the old machines dating back to the '50s and '60s -- are prized today for their rarity, tone, and direct connection to the original Fender company.

This '57 Stratocaster has a very low serial number and a neck dated 6-16-82, marking it as one of the earliest models in the first re-issue run. Designed as a close copy of the original 1957 Stratocaster, the 1982 57 American Vintage Reissue features a 21-fret one-piece maple neck with vintage-size frets, a 2-color sunburst ash body, single-layer white pickguard, original 3-way selector switch, three classic single-coil pickups and vintage-style vibrato/bridge. The neck profile is noticeably slimmer back to front with a rounder profile than the average actual 1957 Stratocaster but otherwise this re-creation is pretty close, and the sound is excellent.

This guitar can be heard with Terraplane in these clips:

This guitar shows some general signs of use but is not heavily worn. The body finish has some checking, with dings, dents and a decent amount of scuffing to the lower back. The neck is relatively clean with some light general wear and a nice ambering to the finish. There is even a 'classic' cigarette burn on the headstock below the low E tuner. The original frets show hardly any wear. The hardware is original except Elliott told us the pickguard was replaced with the exact correct piece long ago; the trem arm is more recent. There is some corrosion on the bridgeplate and saddles but nothing that affects usability. This is a really nice AVRI Strat with a cool history, in the original Tweed re-issue HSC.