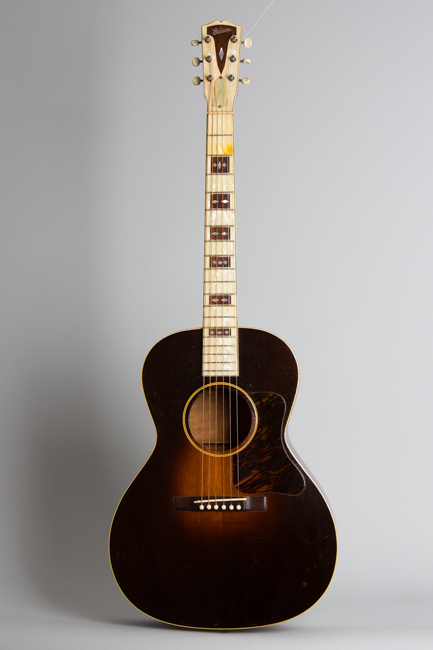 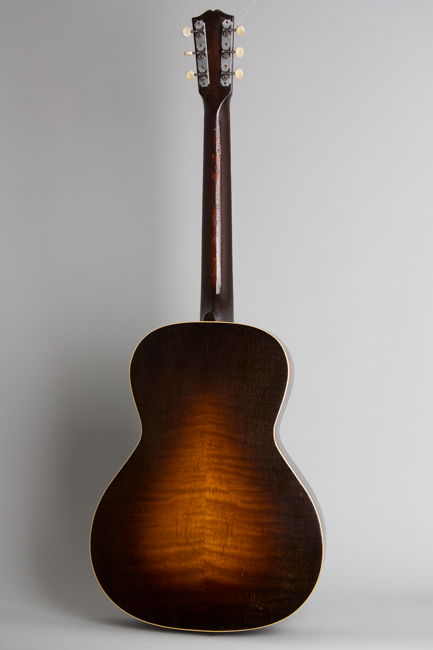 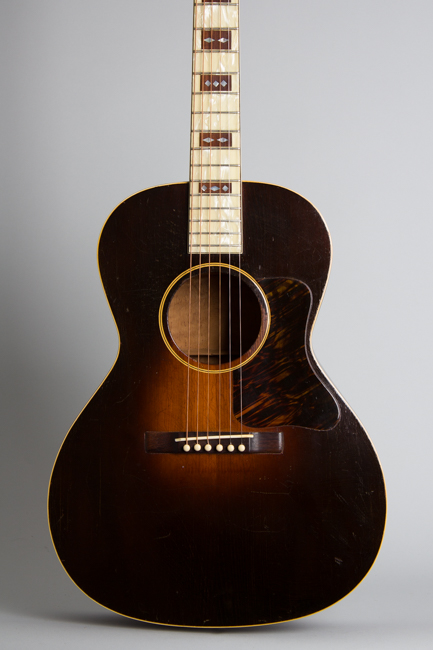 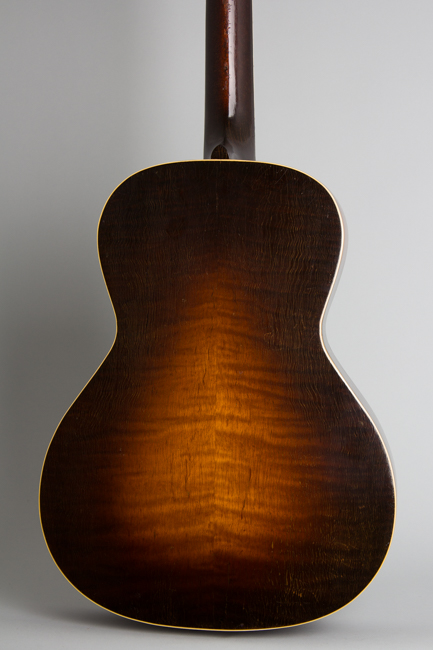 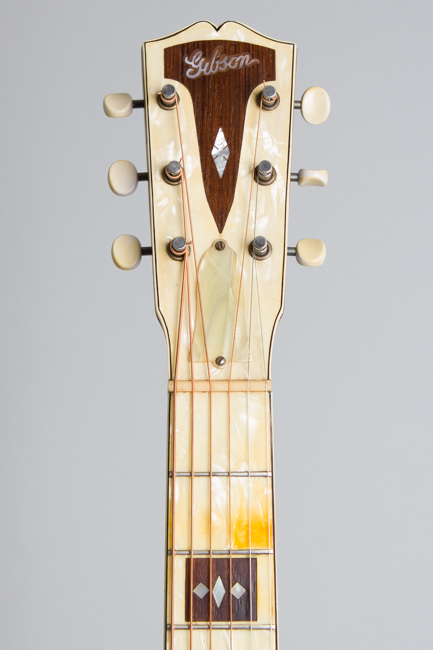 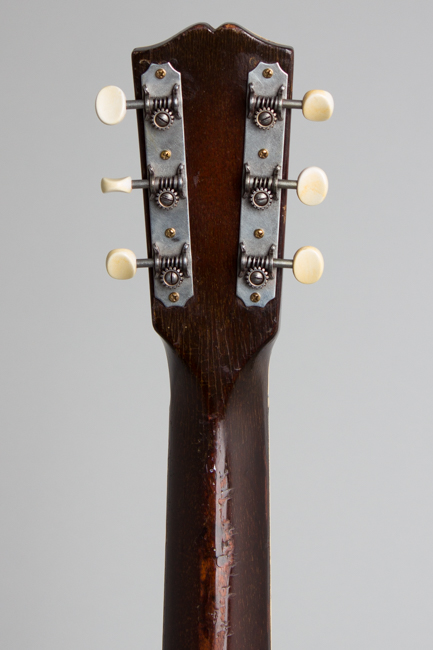 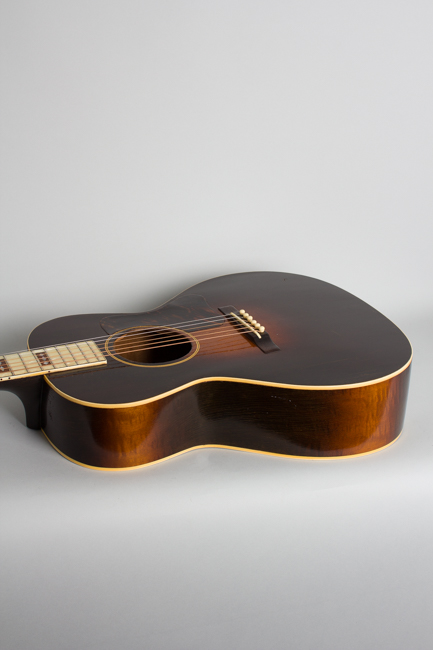 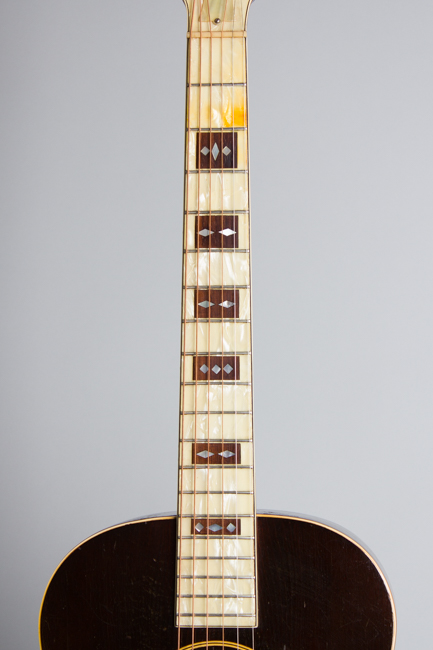 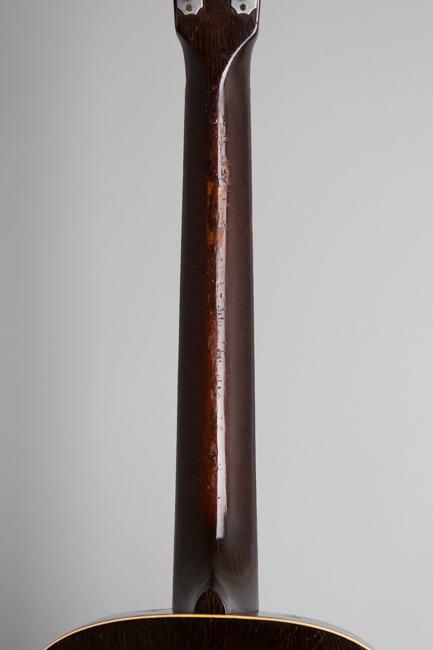 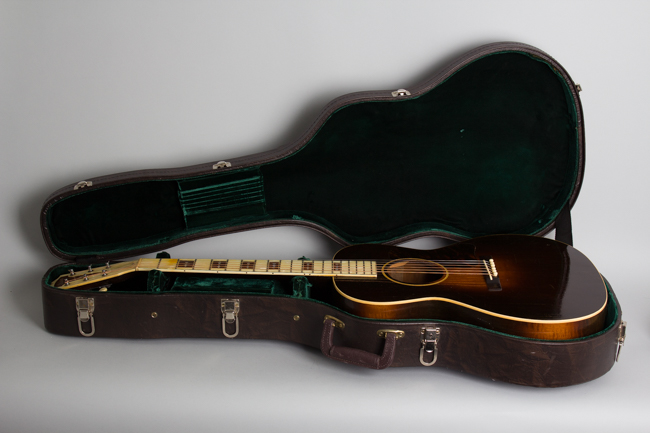 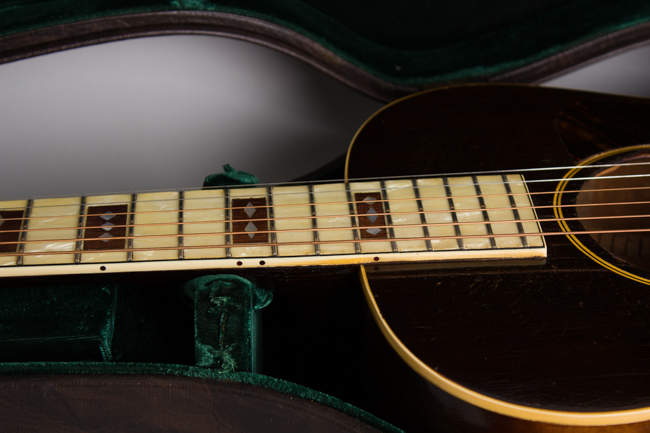 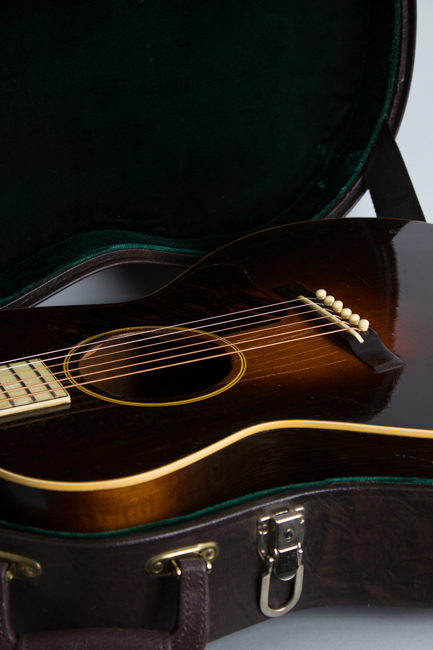 The L-C "Century of Progress" model is one of Gibson's most distinctive and beautiful acoustic guitar designs, and one of the most visually striking flattops of any era. Combining a 14" 3/5 wide curly maple body with flashy pearloid ornamentation on the neck and headstock, the Century is somewhat reminiscent of the look of many 1920's tenor banjos. Not just a "looker", the Century is also a sonically distinctive guitar in its own right. The maple back and sides give it a crisp powerful sound perfectly suited to blues and ragtime fingerpicking and when played with a pick the guitar is both loud and cutting enough to play rhythm in a small dance combo.

The Century is single bound top and back, with finely shaded golden sunburst on all surfaces. The flamed grain on the back of this one is particularly nice. The softly V-shaped mahogany neck is also subtly sunbursted. The pearloid headstock and fingerboard are bound in black and white celluloid. The soundhole ring is 3-ply W-B-W, while the pickguard is made of Gibson's striking pre-war firestripe tortoise celluloid. Small pearl diamonds are set into rosewood blocks inset into the celluloid fingerboard creating a dramatic three color visual scheme which nicely offsets the sunburst-finished spruce top. Legend has it that this design conveniently used up surplus pre-made banjo fingerboards, as banjo orders had dwindled substantially in the 1930s.

The model was originally introduced for the "Century of Progress" exhibition in Chicago in 1933, and discontinued around 1939. This is a fairly early example dating to 1934 with the smaller sunburst area on the top typical of that period. No production figures exist for L-C's shipped in the first few years, but the number is fairly small compared to the L-00 family. The L-C was a comparatively expensive instrument, listing at $50.00 (soon raised to $55) at the time, while the L-00 was in the $25-30 range. While never a common instrument this unmistakable Gibson can be easily spotted in some old photos of Hillbilly and Radio Cowboy acts of the 1930's, including the Girls of the Golden West and Mainer's Mountaineers. A truly distinctive guitar, Gibson's L-C Century is a wonderful if slightly eccentric connoisseur's delight in a pre-war flat top.

This is overall a nicely preserved early example of this unusual and striking Gibson creation, with some signs of use over the past 85+ years but nothing tragic. The finish shows typical moderate checking overall and some wear spots including dings, dents and scrapes mostly on the top, with a few small flaked spots near the neck heel. There are some pick dings over the fingerboard extension and the lower rim of the soundhole is worn through to the wood. The back of the neck has some fairly heavy capo wear that has been smoothed down but is still feelable in spots. The tuners are modern Kluson reproductions; the guitar has had several sets fitted over the decades.

The rosewood bridge is original, it looks to have been lowered slightly from the forward end. Internally the original small maple bridgeplate has had a thin maple cap added; all bracing remains untouched. There are no crack repairs. This guitar does not appear to have had a neck reset, but even so is an excellent player with a comfortable action and plenty of saddle. The original frets are in excellent condition with some minor wear under the B string. With its relatively small maple body and spruce top the Century does not sound quite like any other flat top guitar, offering a powerful, well-defined yet still sweet tone. This one is as good a player as we have had, and looks spectacular in the bargain! Excellent - Condition.
×