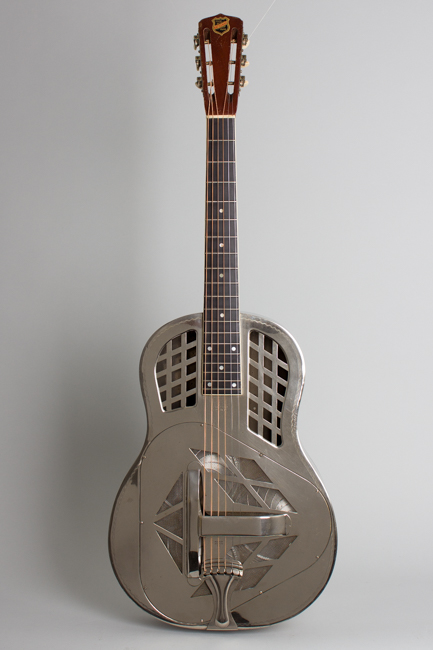 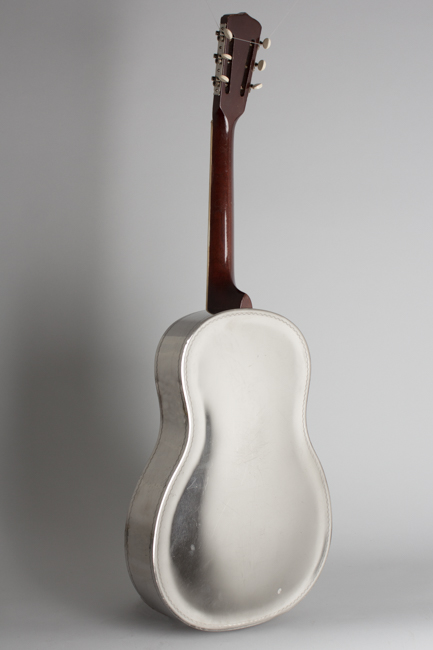 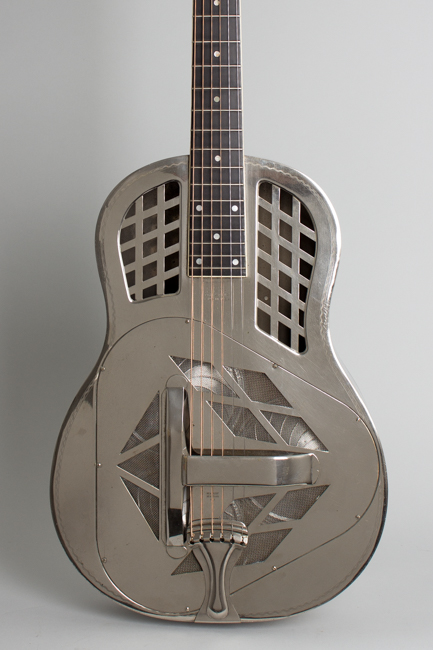 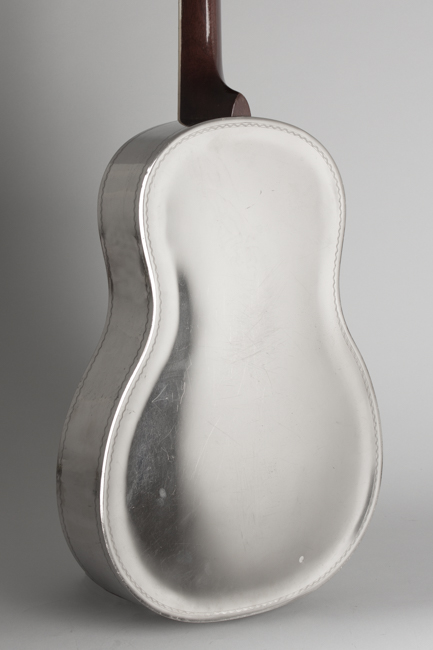 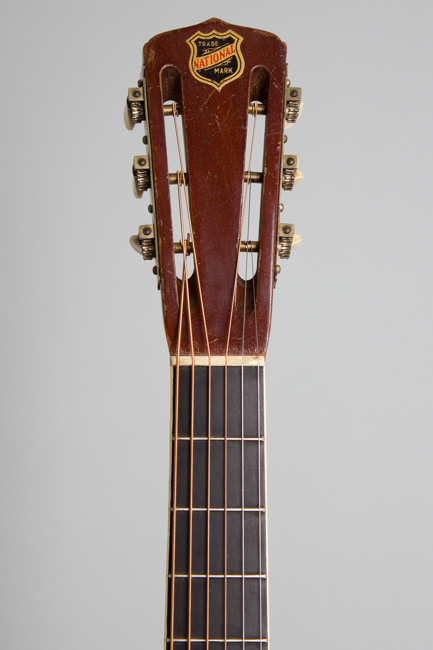 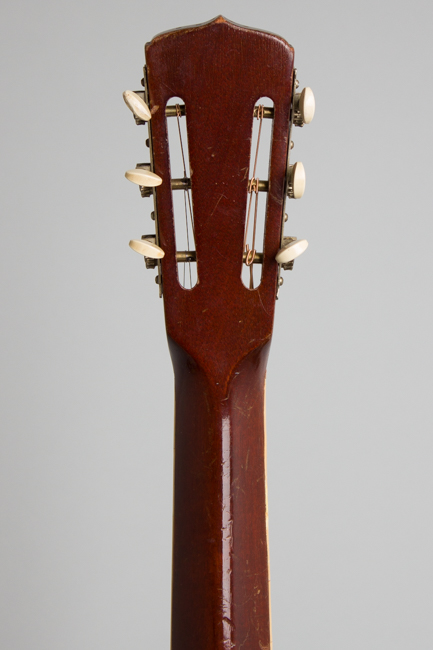 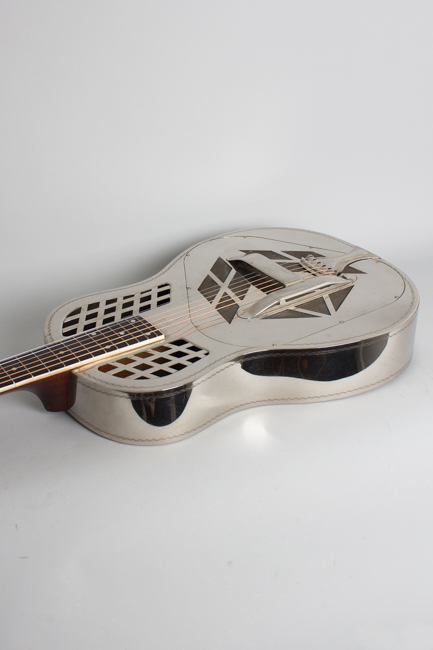 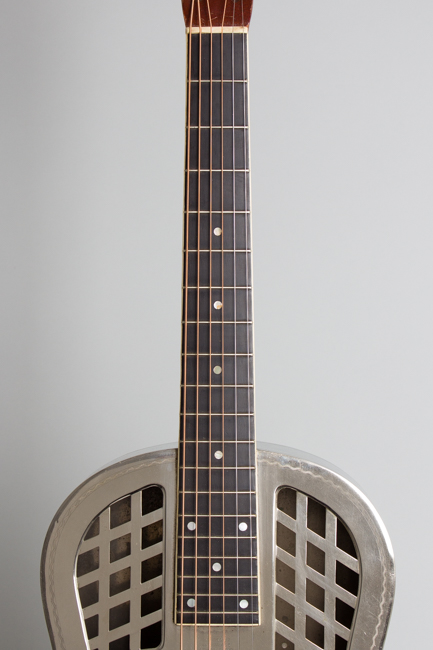 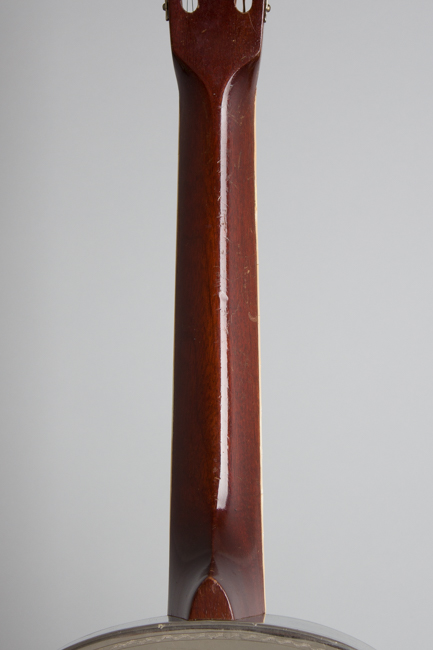 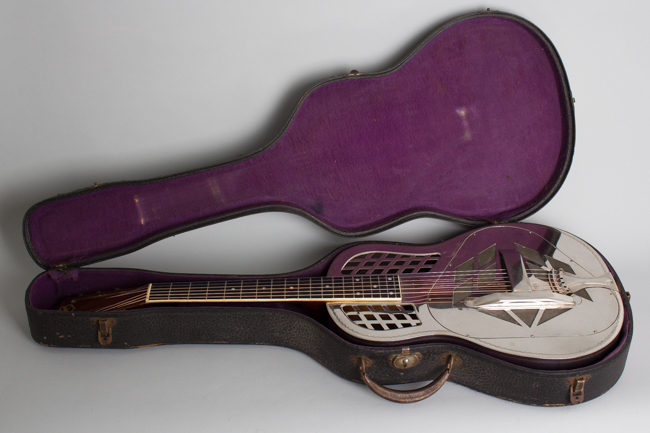 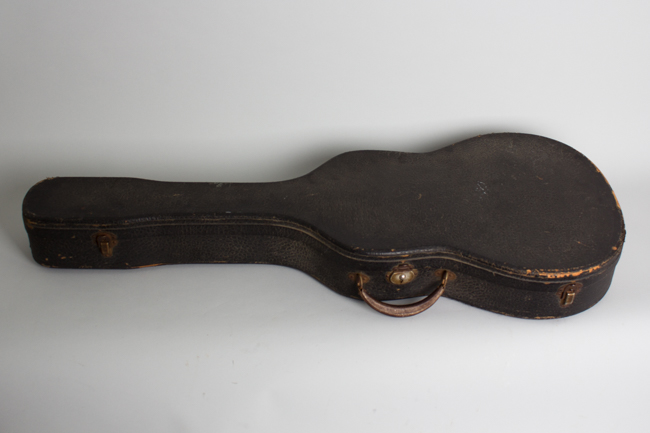 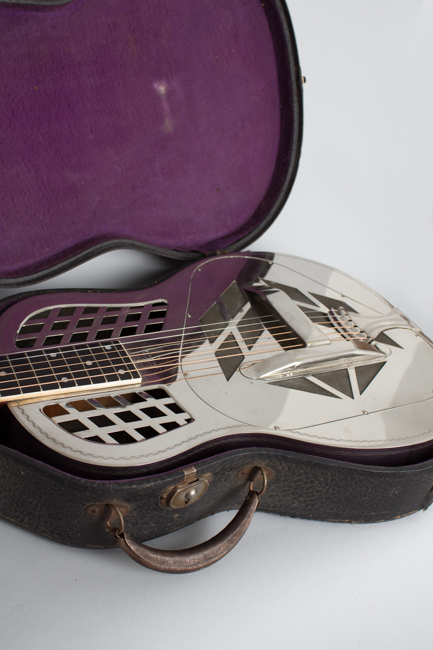 This is a beautiful fairly late production example of one of the classic -- and most distinctive -- instrument designs of all time, the National Tricone "Silver Guitar" Style 1 "Roundneck". These gleaming metal-and-wood creations were introduced in the late 1920s; they are still widely considered the finest acoustic instrument ever created for slide playing. Tricones were popular in the more opulent 1920s, especially with Hawaiian players. By the mid-1930's the combination of depression economics and the emergence of electric guitars meant the National company had mostly moved on to other designs including newer (and much cheaper) single cone resonators; the steel-bodied Triolian and decorated brass Style O.

This particular Style 1 is the much rarer round-neck version; the square neck Hawaiian was always more common. It was made around 1935, when Tricones of any sort were produced only in very small numbers. At the time the retail price was $125.00, a tremendous sum in Depression-era America, so it's hardly surprising that few were sold.

While all Tricones are exceptional slide guitars the roundneck "Spanish" Tricone is also an excellent and totally unique-sounding guitar for many other styles of play besides the Delta Blues they are most associated with. The German silver body has three cones fitted in a well in a triangle pattern under the tri-armed bridge that activates them. The oddly-shaped body is topped by a screen-hole coverplate with a central handrest. The mahogany neck has a fairly slim (for a National) soft "V" profile topped by a bound ebony fingerboard with pearl dot inlay. The slotted headstock still has 1920s style strip tuners and the logo decal on the face. These roundneck Tricones are considerably rarer than the square neck "Hawaiian" variant and have long been sought after as the ultimate acoustic blues/slide guitar.

This particular Style 1 is a fine playing example suitable for both open-tuned slide and regular Spanish play with the rich and complex sound only Tricones produce. The otherwise plain nickel-plated body has a "wiggle' border engraved around the outer edge, a later feature added in the 1930s that has led to a collector's nickname "Style 1 1/2". Even with this decoration the Style 1 is the 'purest' example of National's Art Deco aesthetic, and mysteriously often seems to be the best-sounding as well, although there is no scientific reason why that should be!

This is a nice original Tricone with some general wear, but unaltered original condition. The nickel finish on the body shows some minor corrosion and a few small dents, but is in better condition than many. The neck finish is a bit thicker than 1920s versions but also remains original and intact with some minor dings and dents. Even the fragile headstock decal has suffered only a couple of small dinks.

Everything on the guitar including the cones, the 3-point saddle unit, fluted tailpiece, and engraved Waverly tuners, appears original. The frets and fingerboard show hardly any wear, it simply appears this guitar was not played too much. This is as nice a "Spanish" roundneck Tricone as we have had in a while; great-looking and fabulous-sounding, and even includes the rare original hard shell case with some wear but still functional condition. Excellent - Condition.
×