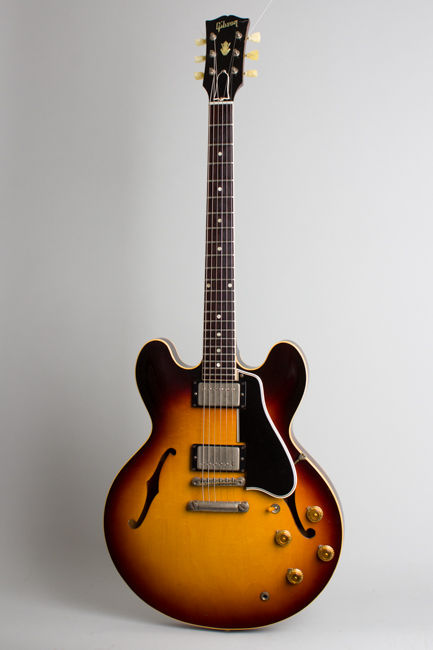 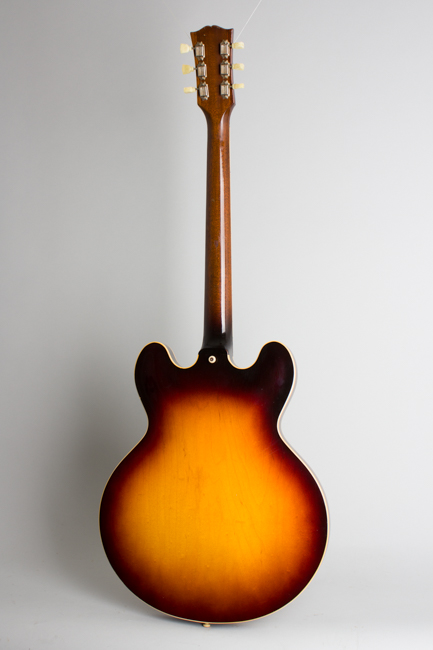 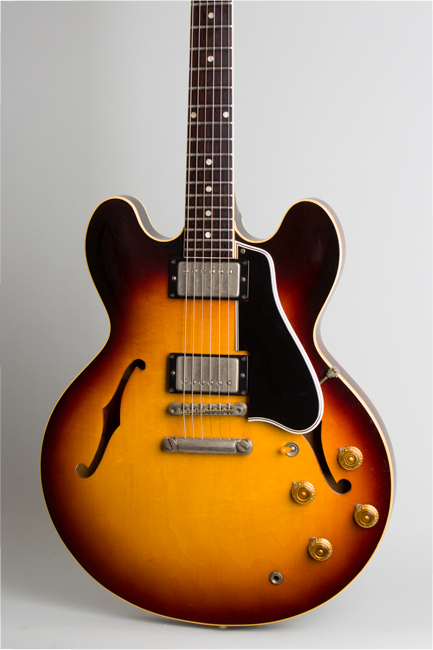 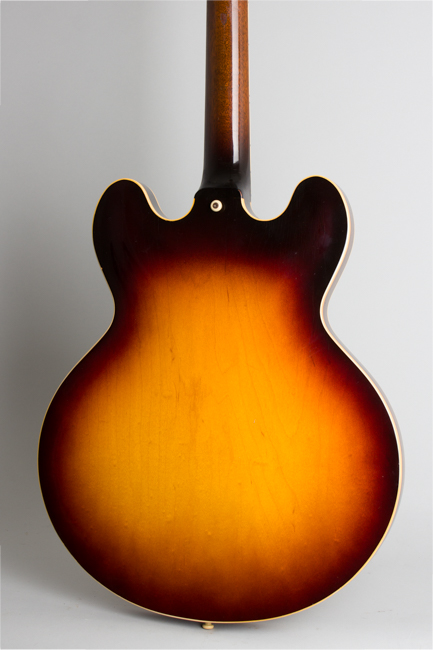 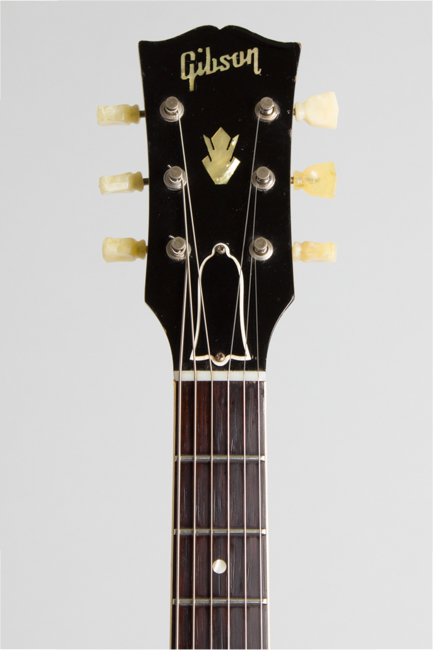 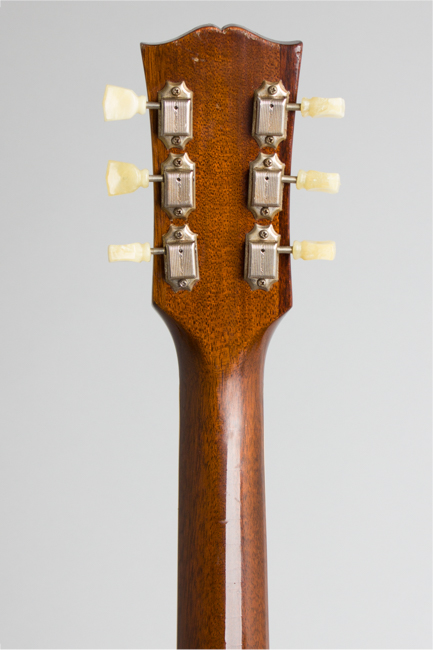 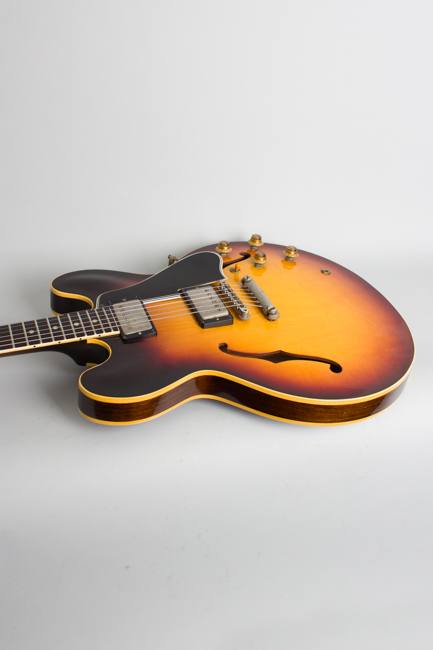 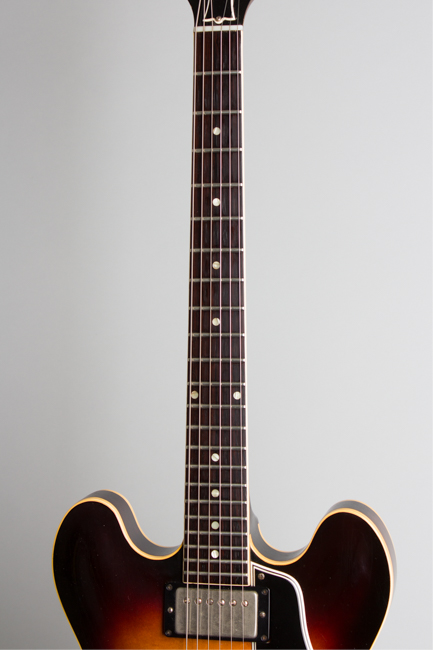 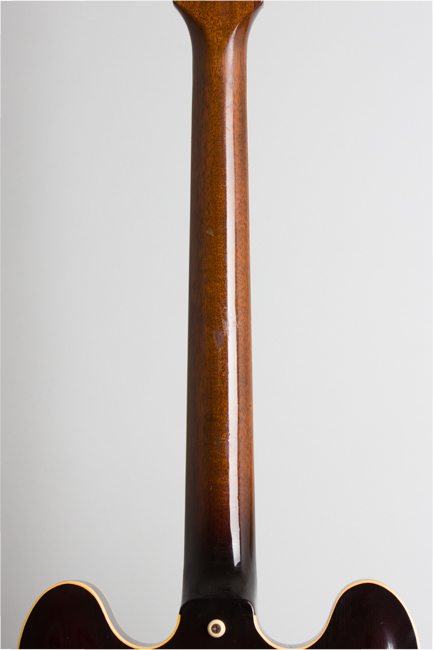 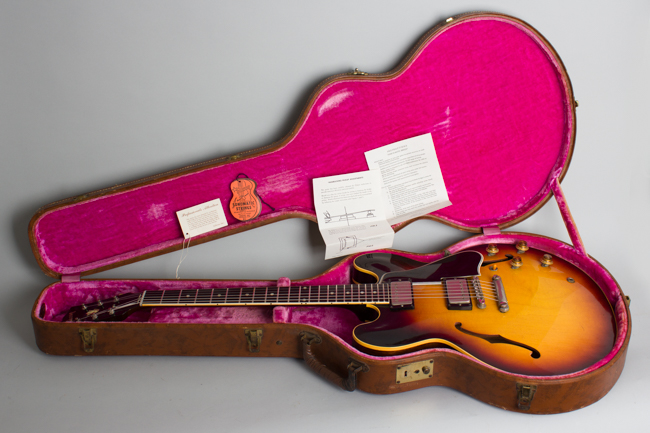 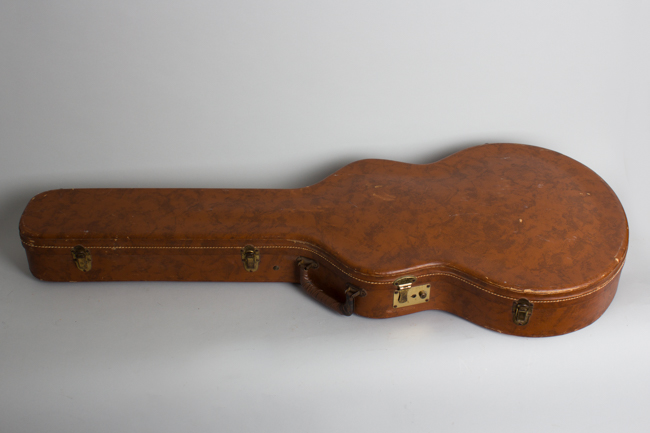 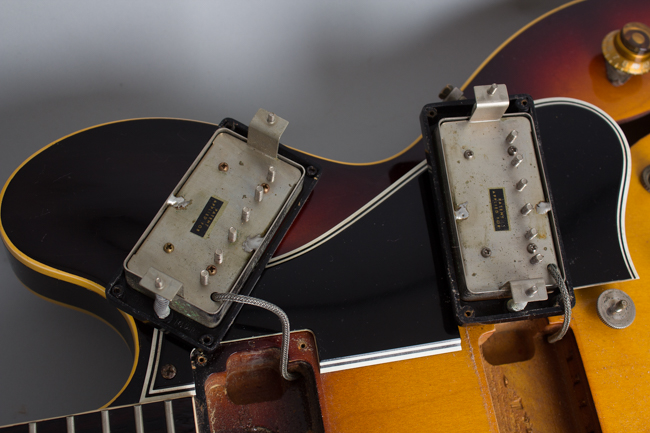 This is a truly stellar example of one of Gibson's absolute classic electric guitars -- an ES-335 from the most widely favored year 1959. Although 335's from just about any year are usually excellent instruments, connoisseurs of the model consider 1959 the ultimate examples. All of 521 sunburst finish ES-335s were shipped out of Kalamazoo in '59, which was the first full year of the model. According to the "A" Artist series serial number this guitar shipped in late December 1959, or possibly the first few days of January 1960. The factory order number stamper under the treble side F-hole is S1765-10 which indicates it was built somewhat earlier in the year; the ink is somewhat smeared but still fully legible

This ES-335TD bears a beautiful shaded sunburst finish on the top and back and shows typical features for 1959, most notably a bound, dot-inlaid fingerboard which would be changed to pearloid blocks a couple of years later. The neck profile is has a subtle C profile, feeling like a bit of a transition between the deeper more round-backed 1959 style and the thinner flatter profile "1960 neck" which replaced it at the dawn of the new decade.

All the hardware including pickup covers, tailpiece, "no-wire"ABR-1 bridge, and pickguard bracket are nickel-plated. The pickups are a killer set of all-original PAFs which have never had the covers removed, and sound spectacular. This is an original stop tailpiece guitar; there are four small holes in the rim around the strap button indicating a standard Bigsby without the tension bar was fitted at one point, then removed. Fortunately there was no marring of the top at all, only the discreet marks on the rim.

At 7.88 lbs. this is one of the lighter ES-335s we have had, and handles like a dream. Overall this is simply a fantastic guitar, played but not abused, and sounds amazing in everything from straight jazz to funky blues to flat-out scream. Even not plugged in it has a real ring to it. It is housed in the classic brown-and-pink Gibson hardshell case with a nice set of "case candy" Gibson paperwork.

Overall this is a nicely original guitar with some typical wear and maintenance but no abuse. While it appears to have been played over the past 60+ years the instrument was also well-cared for. The finish shows light wear overall, with some typical minor checking, small dings and dents, and some scratching thru on the back. The back of the neck shows some play time, and the finish is worn down over some of the surface. The neck has a couple of deeper dings behind the 4th and 7th frets but overall feels great, with that perfect vintage Gibson vibe.

The guitar has been very neatly refretted with appropriate wire that is just a bit taller and crowned a bit flatter than the original. The Kluson Deluxe tuners are original with newer repro single-ring buttons, as is typical of 1959's where the original buttons deteriorate badly. Four of the original removed buttons are shriveling away in a baggie in the case pocket. The nickel hardware has typical wear, most notable as expected on the bridge top and tailpiece from contact with players' hands. Except for the tuner buttons all hardware is original.

The PAF pickups are original and undisturbed and sound fabulous, the covers show some plating wear but have never been removed with untouched solder joints on the underside. This is simply a wonderful-feeling and sounding guitar, with a spirited selection of splendid PAF tones from sweet to snarly to monster overdriven and very touch sensitive at all sound levels. Includes the original HSC with some wear but still very solid, a fine example of one of Gibson's all-time great instruments. Overall Excellent - Condition.
×