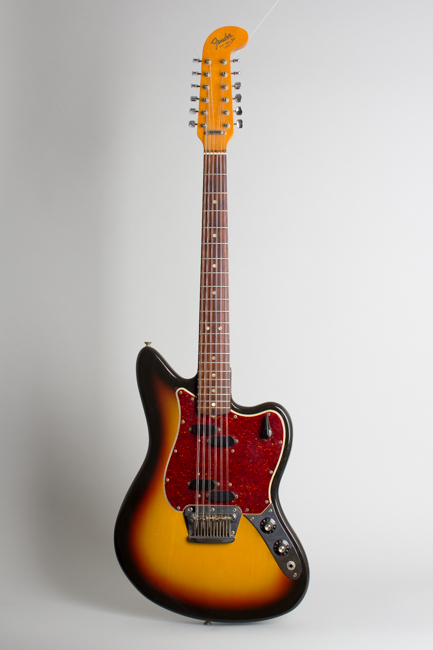 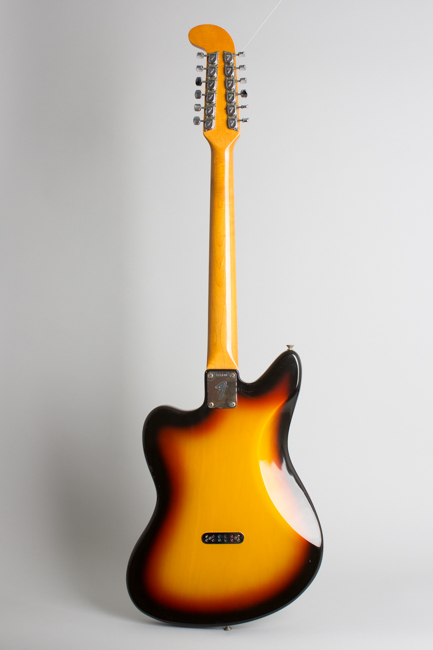 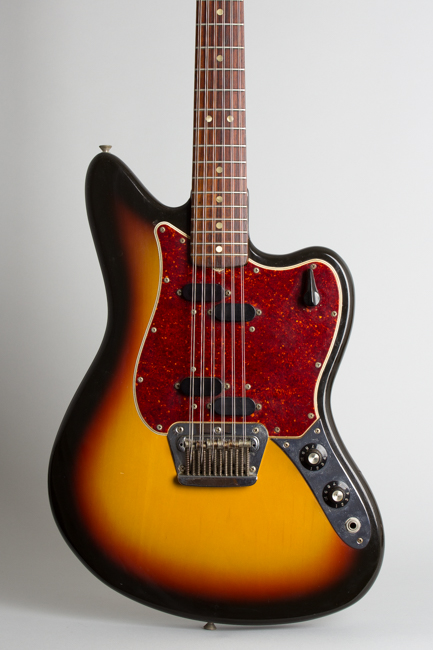 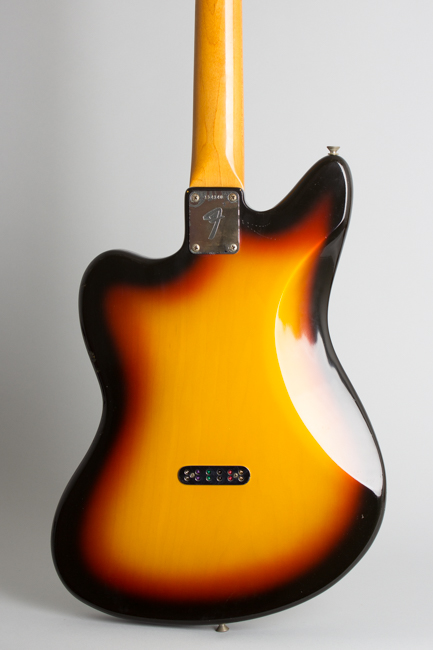 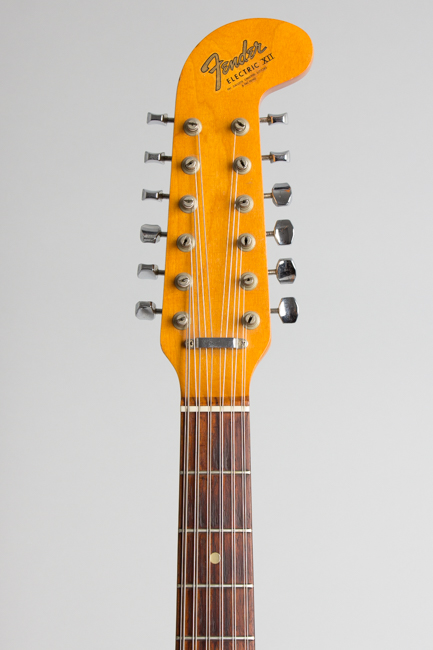 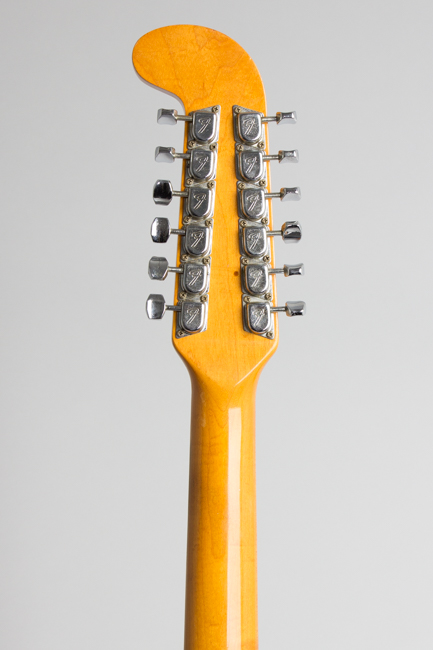 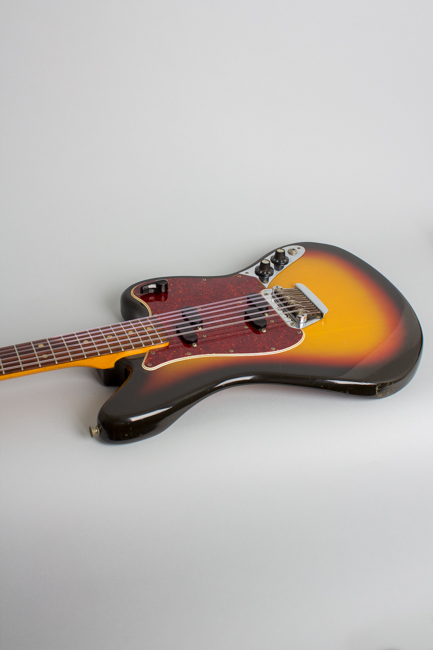 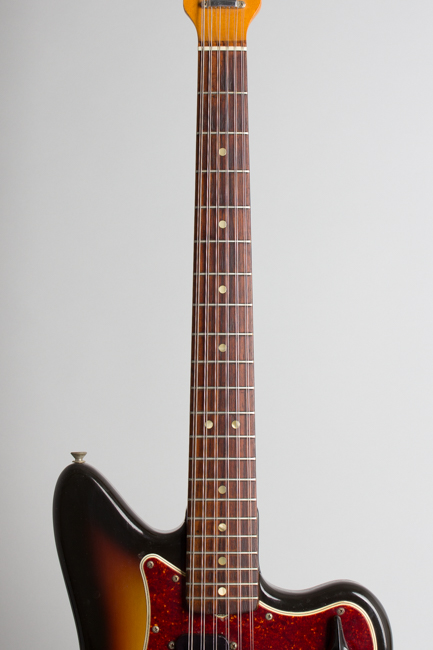 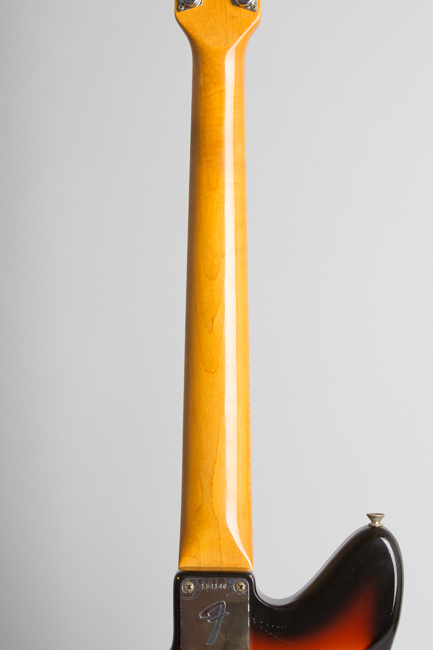 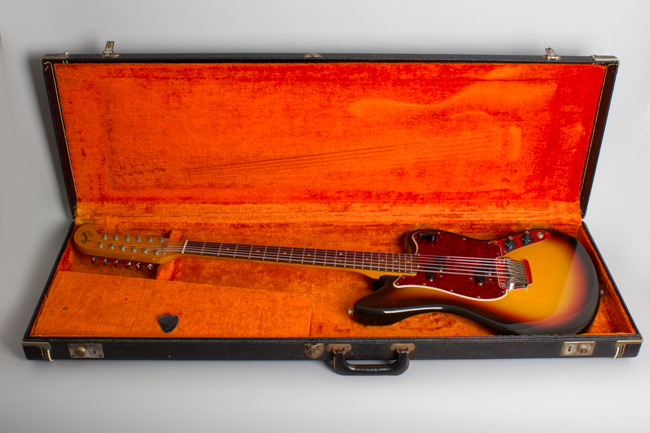 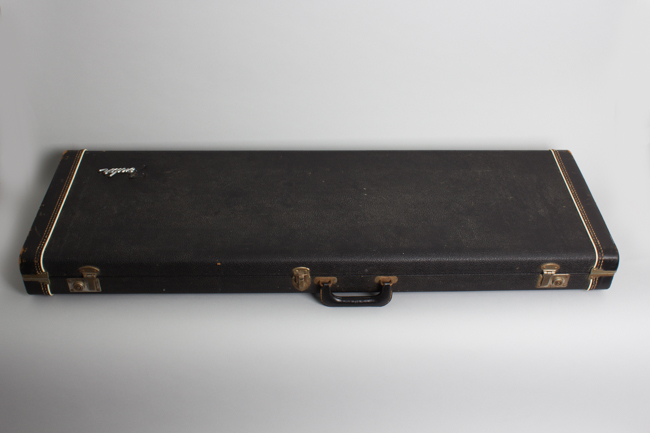 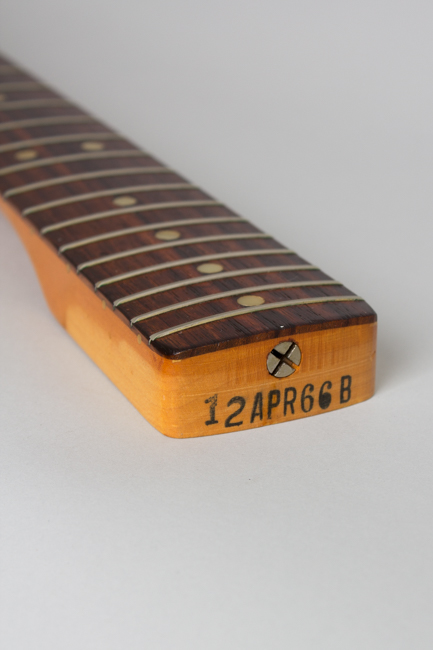 The "Electric XII" is not one of Fender's best-remembered creations but nonetheless is a superbly engineered, great-sounding and extremely practical instrument. Introduced at the 1965 NAMM Show at the dawn of the CBS/Fender era the Fender 12-string married the popular Jaguar/Jazzmaster style offset body to a new 12-string neck with a distinctive extended "hockey stick" headstock. The neck itself is typically Fender; slim and very comfortable. These are often considered the best-playing electric 12s of the 1960s.

The electronics are unique as well with two pickups each with two separate coil units, as pioneered by the Precision Bass but with smaller Mustang-style coils. These are mated to a 4-way lever switch allowing individual pickup selections or two different phase combinations. The bridge is a marvel of Leo Fender's engineering prowess; it strings through the body with 12 intonation-adjustable saddles and is generally considered the best unit of its kind. This guitar dates to 1966, the year the great majority of Electric XIIs were made. The neck heel is dated April 1966; the volume pot and (possibly) the jack have been replaced but the tone pot is original, coded to the 30th week of 1965.

With all the original engineering involved, Fender somewhat missed the boat a bit on the electric 12-string fad and by the time the "Electric XII" was ready to market in quantity in late 1965 it was Rickenbacker that had already reaped the bulk of benefit of the Byrds' and Beatles' popularization of the sound. For all that, the solidbody Fender is a very good design and an excellent-sounding stage or recording instrument, albeit without exactly capturing the Rick's trademark jangle. Led Zeppelin, the Velvet Underground, The Move, The Kinks, Herb Alpert's Tijuana Brass, the Baja Marimba Band, and many others have made classic recordings with this model, and its full potential is perhaps still untapped.

This is a really fine example of this relatively unsung Fender gem, remaining almost all original and showing just some very minor wear overall. The finish is completely original with some typical light checking and smaller dings, dents and handling wear. The "target" sunburst finish is still bright with virtually no fade to the color. There is no noticeable belt buckle wear on the back but a few deeper dings mostly on the edges. For some reason lost to history the neckplate has lost nearly all the chrome plating and looks fairly well corroded, although the finish nearby has only light wear. The rest of the hardware shows only some light typical minor corrosion, so we can't tell what caused this anomaly!

There is some finish worn off the back of the neck, mostly on the treble side edge. The lacquer checking is heaviest on the headstock. As noted the volume pot and (possibly) the jack were cleanly replaced long ago, probably just because they were dirty. Otherwise this guitar is unaltered and looks to have simply not have been played that much since it shipped out of Fullerton in 1966. Overall this is a lovely package of 1960s timeless jangle from Fullerton, housed in the original black Tolex Fender HSC. Overall Excellent Condition.
×