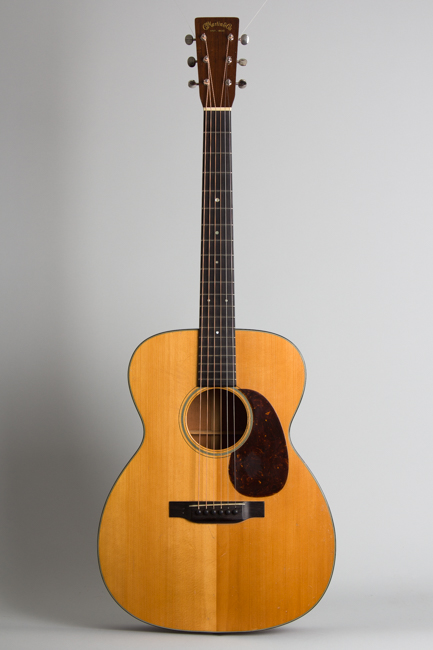 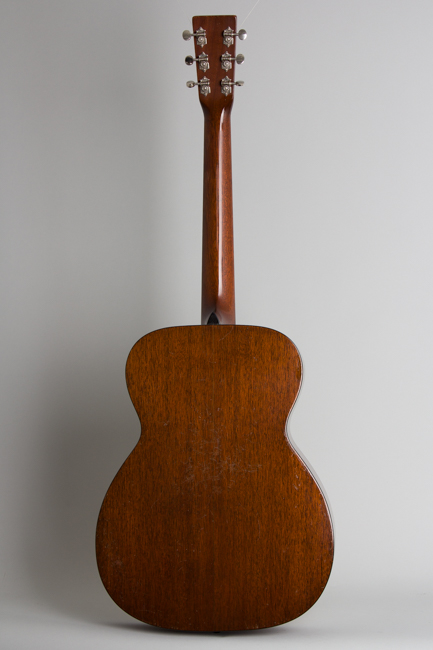 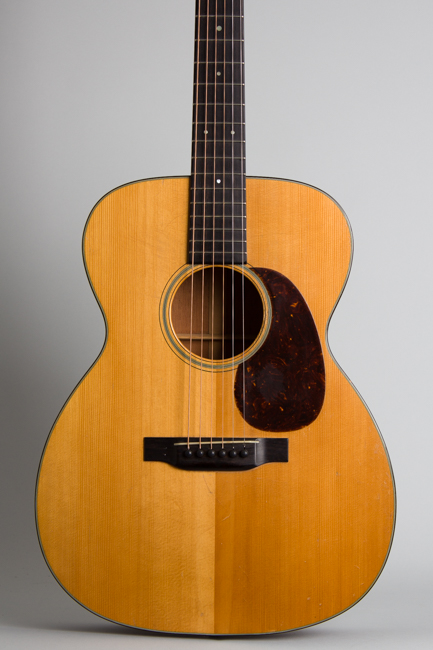 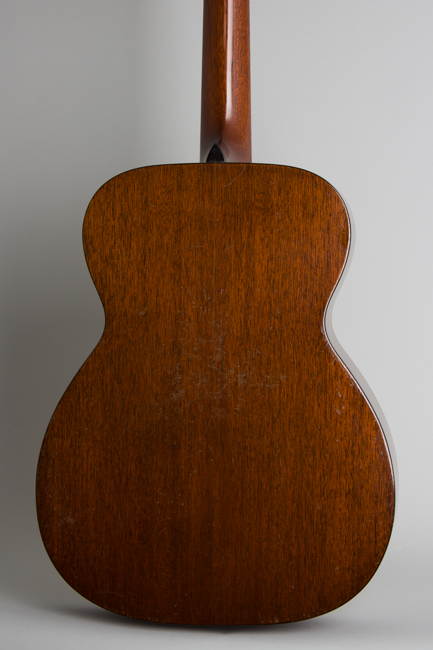 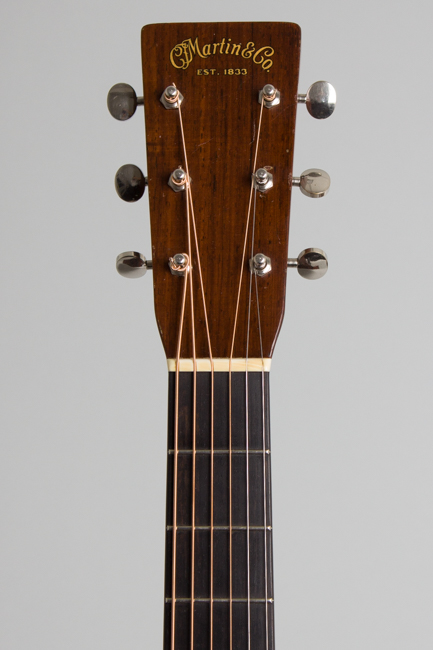 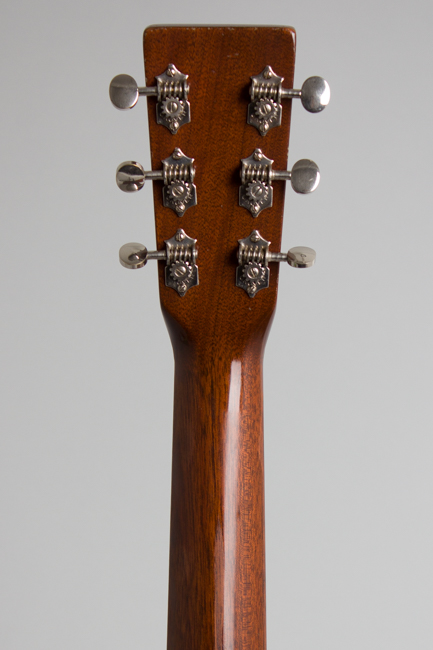 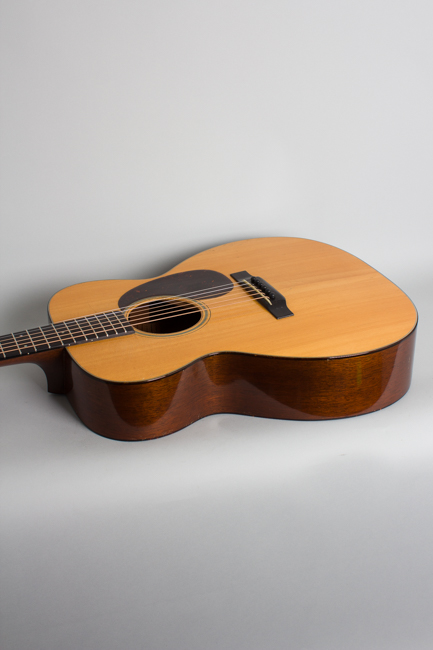 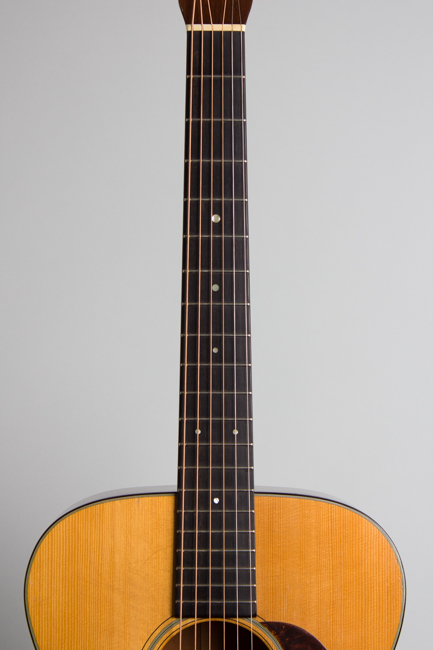 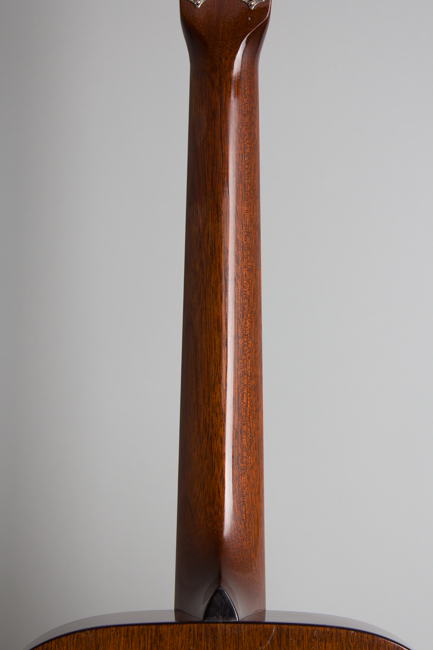 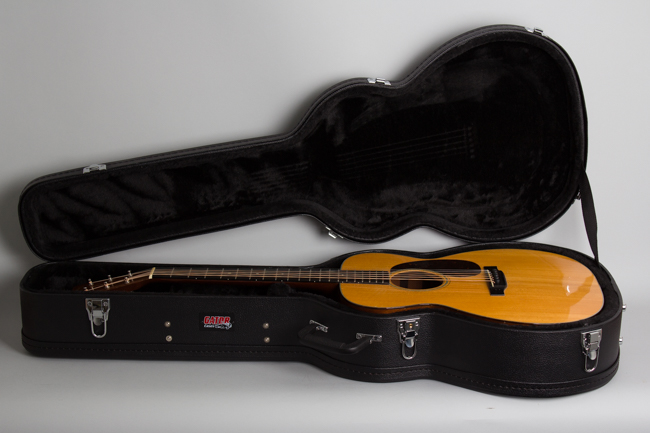 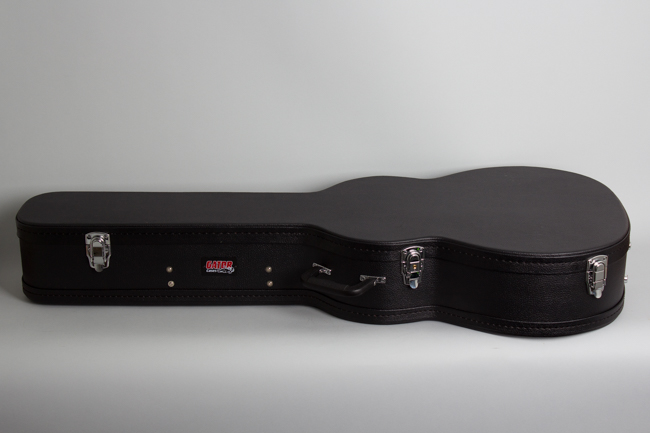 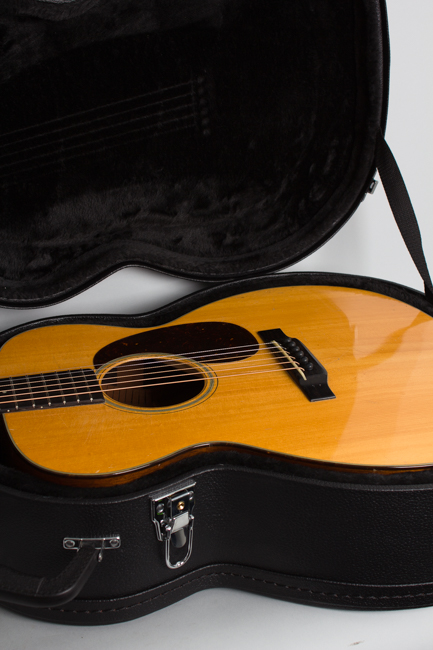 This is a really superb example of a pre-war 000-18, not one of Martin's rarer creations but to many one of the company's most beloved combinations of wood, wire and inspiration. The light mahogany body and scallop-braced Adirondack spruce top make for a very responsive guitar; the 15 1/4' wide but narrow-waisted 000 size body contributes power, depth and clarity to the sound.

This example was built in the first half of 1938, one of a total of 277 000-18s shipped that year. It incorporates several 1937-era construction features that were changed over the next year or so, notably the "forward" X-bracing with the center closer to the soundhole and a slightly wider 1 3/4" nut. Recently, as older Martins have been studied in ever more detail both of these have become much discussed and sought after features. 1938 000-18's also feature an ebony fingerboard, bridge, and a steel "T" bar neck reinforcement, features that would all be changed a few years later.

While not particularly expensive by Martin standards in 1938 listing at $55.00 (plus case) the 000-18 still represented a substantial investment to many players at the time. This is not a flashy guitar; the trim is discreet with tortoise celluloid on the body edges and a simple multiply soundhole ring. In classic Martin style, the elegant understatement speaks for itself. Despite its lack of flash this was always a fully professional instrument popular with radio entertainers, most obviously the country acts common in the southeast.

In the years since, Martins of this era have become the benchmark for all subsequent acoustic guitar designs. The 000-18 is an extremely versatile instrument-this one can be used to play effectively in virtually any style of music. Both as a creative tool and as an object of beauty and grace, this is a wonderful example of Martin's contribution to the art of the American guitar.

This is an exceptionally fine specimen of a pre-WWII 000-18, one of the nicest we have seen in a very long time. Apart from some belt buckle wear into the finish on the back, this guitar does not exhibit a lot of scars from its nearly 85 years on earth. The original bridge has been neatly re-glued, and there appears to have been a superb professional neck set. The original small bridgeplate is intact and unmolested. There has been no finish work at all; there are some small scars to the top (mostly around the soundhole and some scratching through the lacquer on the lower treble bout) but overall both top and neck finish are far cleaner than most from this era. The back of the neck is very little worn with none of the often seen capo dings.

As noted, there is some fairly heavy buckle marking to the back, into but mostly not through the finish. The original Grover Sta-Tite tuners are working well and the plating on them still shines. The action is currently 3/32" on both bass and treble sides. This guitar is a perfect example of what makes these pre-1939 Martins so sought after by connoisseurs; the sound is both precise and expansive, with an unmatched combination of clarity and depth. This mahogany 000 excels as both a finger- or flatpicked instrument, and is perfectly suited to a wide range of musical applications. This is not a pristine guitar but still a truly fine example for the player or collector, "golden age" Martins in this kind of condition are increasingly hard to come by well into the 21st century. Excellent Condition.
×