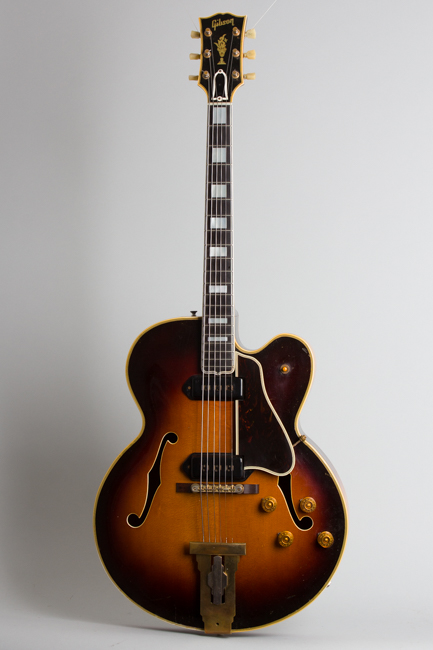 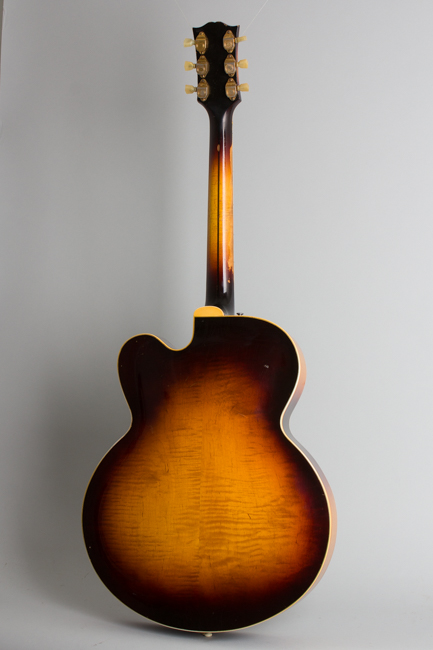 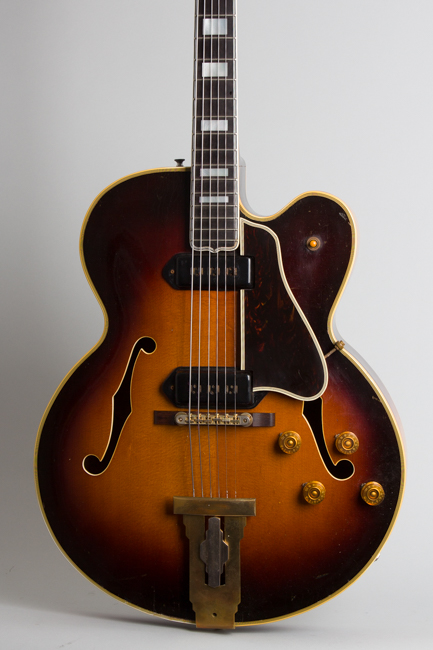 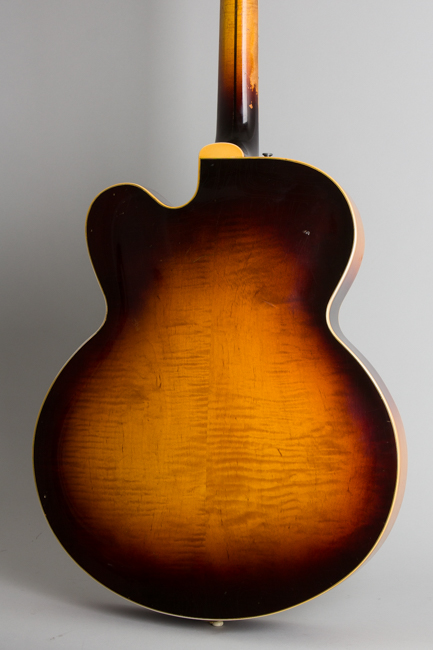 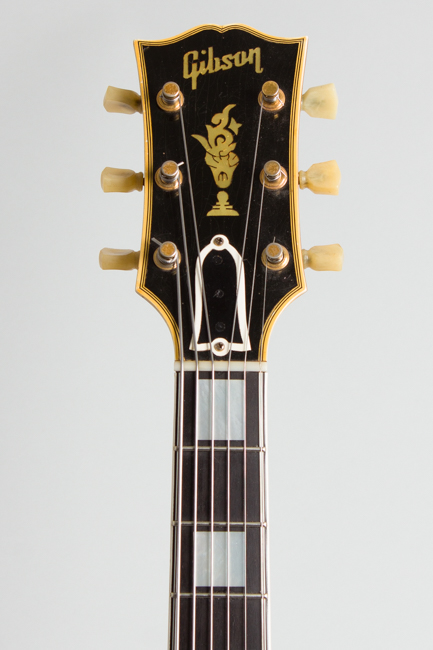 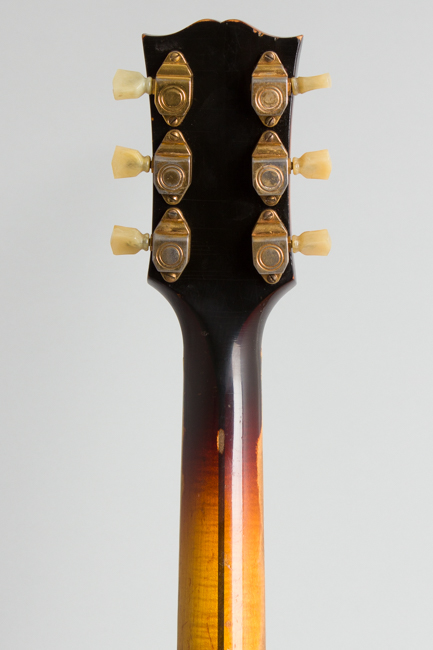 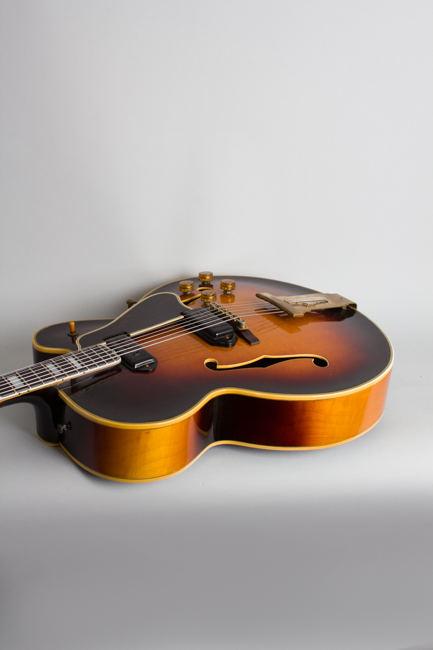 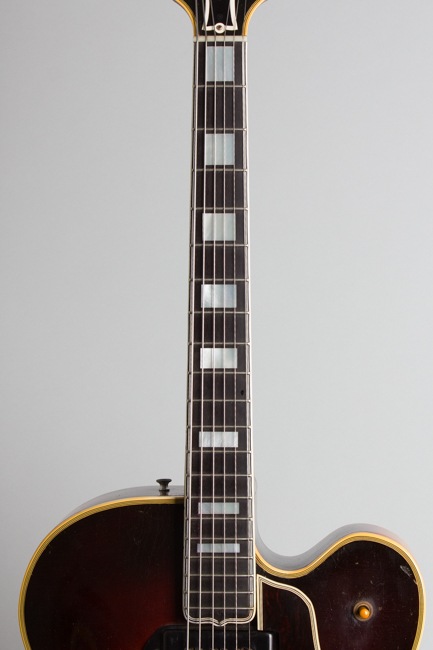 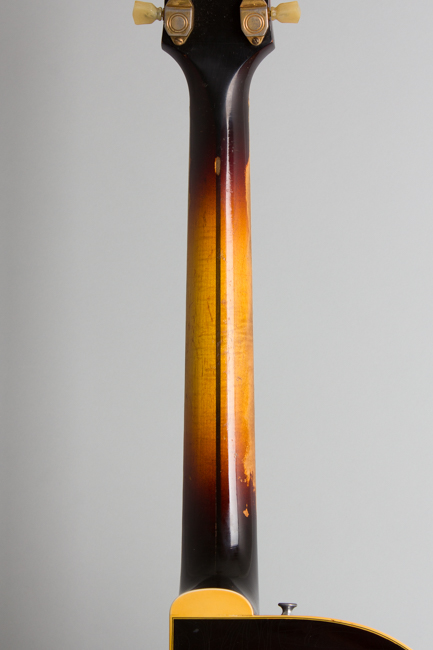 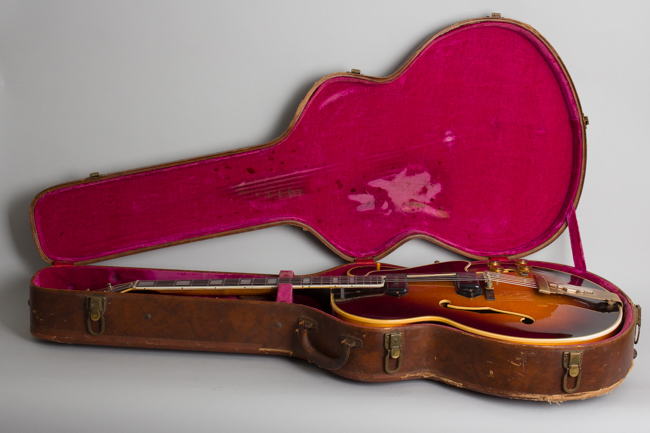 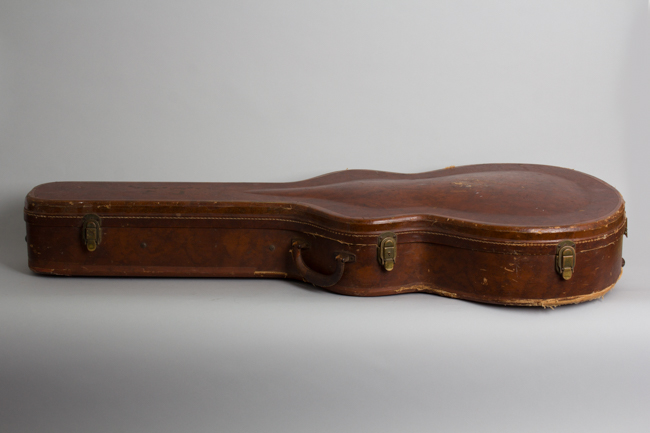 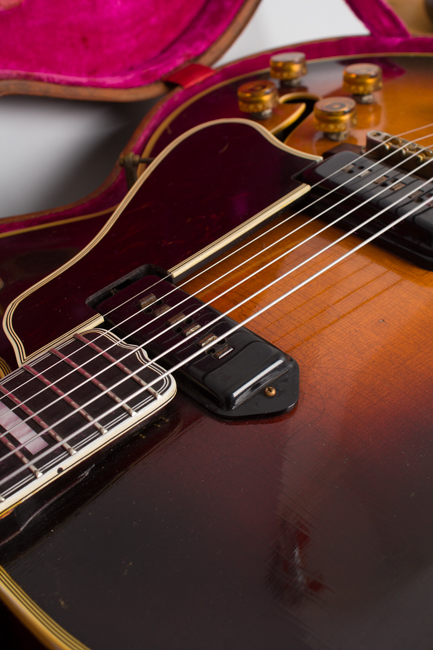 In Scotty Moore's hands, they called the L-5CES "the Guitar that changed the World". This guitar may not have changed the world, but alongside its 18" sister the Super 400CES it was Gibson's flagship instrument in the 1950s. Both models represented the fanciest, most deluxe electric guitars available. Just before the advent of commercial solid bodies, when introduced in 1951 this was the most advanced amplified 6-string in the world.

Built with all solid wood including a fully carved top and back, these two models were aimed squarely at the top of the market. With all the cosmetic and construction features of the acoustic L-5C and two built in pickups the L-5CES was a guitar worthy of Gibson's top endorsers, the biggest name jazz, Country & Western and pop players of this pre-rock era.

The laminated-wood electrics Gibson and Epiphone offered by 1950 were big and fancy, but still didn't have quite the cachet of the fully carved acoustics. The L-5 CES ("Cutaway electric Spanish") and Super 400 CES were meant to fill that niche. While the L-5CES cost a bit less than the Super 400CES, many players preferred the 17" body and this was to many the defacto top of the line Gibson.

The features of this instrument are based on the contemporary L-5C, including multi-bound body, fingerboard, and headstock; bound f-holes; pearl block inlay in the ebony fingerboard; and a pearl "flowerpot" inlay on the headstock. The electrical appointments are specific to this era. The two pickups are the high-end "staple pole" units used by Gibson only in the 1954-57 period, before the humbucking unit was designed. Compared to the earlier P-90 pickups these put out a fairly bright snappy sound (not unlike the DeArmonds they resemble) and have a sharper attack. These are controlled with the "standard" Gibson rig of four knobs, and a selector switch on the cutaway. This model actually introduced this now-familiar wiring scheme to the world in 1951.

The hardware is typical of the era; the tailpiece is the same one used on acoustic L-5-s incorporating the Vari-Tone setter, otherwise known as the "top buster adjustor". The bridge is the then brand-new Tune-O-Matic, gold plated on a rosewood base. The pickguard is multi-bound tortoise celluloid with a gold-plated bracket, even the switch is gold-plated with an amber plastic tip. The tuners are the heavy enclosed Kluson "Sealfast" individual units with translucent plastic keystone buttons.

This particular guitar has lost most of its internal label, so the exact shipping date is impossible to pinpoint. The Factory Order Number under the treble side F-hole indicates it was made in late 1954 so it is either one of the 30 sold that year or the further 19 shipped out in 1955. Production totals were very small on these expensive instruments throughout the 1950s; Less than 100 total L-5CES models with this instrument's specific features were built between 1954 and 1958, when humbucking pickups were substituted for these earlier ones.

We don't know who originally bought this guitar in 1954-5, but anyone purchasing an L-5CESN was almost certainly a serious player and could absolutely afford the best! Scotty himself said "the workmanship was so much better on the L-5" compared to the plywood ES-295 he traded in for it.

This IS a spectacular-sounding guitar, with a unique tonality for a large-body Gibson due to the combination of the solid wood construction and fairly rare Alnico staple-magnet pickups. It perfectly re-creates the early Elvis RCA sounds, and a host of others besides. As George here said immediately when it came out of the case: "That's a REAL guitar!"

This beautiful guitar shows some playing wear and discreet repair; it was definitely someone's gigging instrument at one point. That said, it remains all original showing the signs of play and use over 65+ years. The finish has checked lightly, mostly on the top. There are a number of scuffs, scratches, and a couple of deep dings into the spruce top, the most noticeable by the rim below the switch. The only decent sized areas of wear through the lacquer are several spots on the back of the neck.

The guitar does show some old repair work to the solid spruce top. There are two neatly repaired grain cracks just above the tailpiece, possibly from an old impact on the rim. These are solidly sealed with minimal touchup. The top also shows one long grain split running under the bridge from the back edge of the rear pickup to the front edge of the tailpiece, located just above the low E string. This is also well sealed but the touch up involved is a bit more visible under close inspection. The top is completely solid and shows no signs of sinking or distortion. There are no other cracks, not even through the jack area which is too often typical of these.

The hardware is all original and complete except for a nearly perfect repro pickguard; the gold plating on the tailpiece and no-wire ABR-1 bridge shows some fairly heavy wear. The neck angle is good and this is a fine playing guitar. The original thin wire frets have been crowned down over the decades and are a bit thin on the ends, but playability is not affected.

This is a very beautiful guitar even considering the wear and well-executed repairs, and was definitely someone's gigging instrument at one point. That said, it remains nicely original with a great and unique sound combining the warmth and depth of carved wood with the snap of Seth Lover's often under-appreciated Alnico pickups. The instrument is still housed in the original brown case, which has some wear but is still quite serviceable. Overall this is a lovely if naturally "reliced" example of one of Gibson's proudest creations: "The Apogee of the amplified guitar" in the words of Gibson historian A.R. Duchossoir. Overall Excellent - Condition.
×