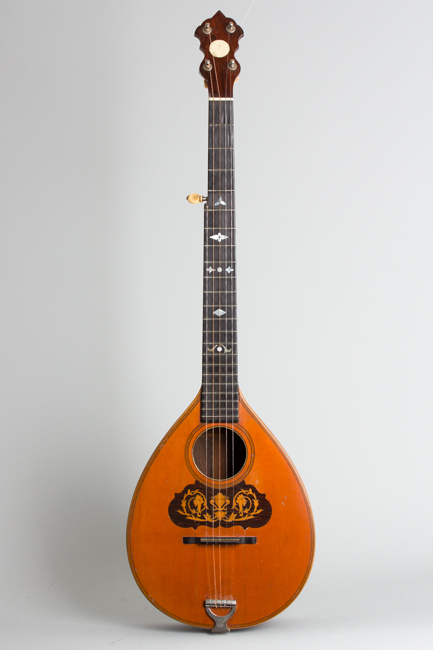 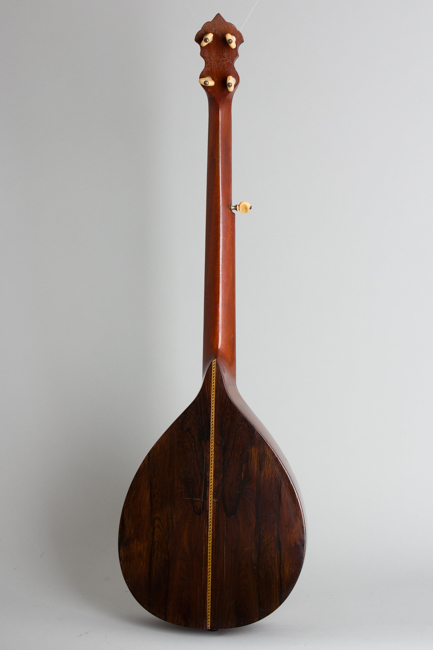 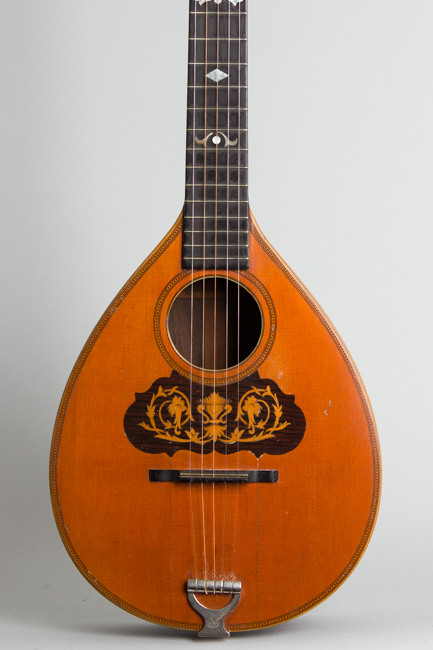 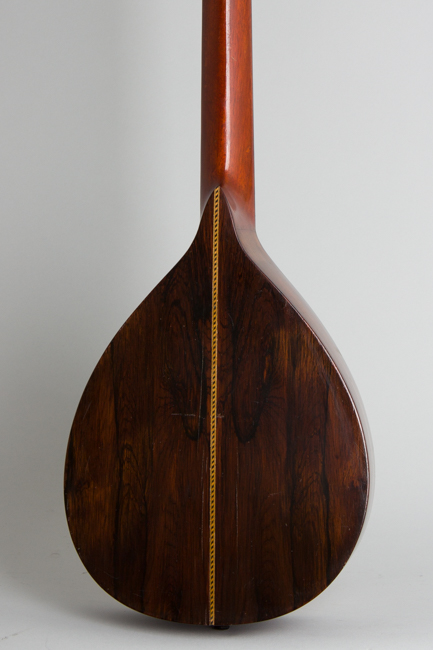 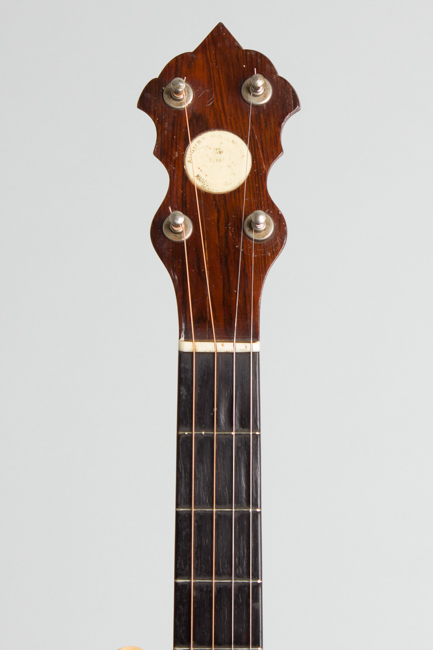 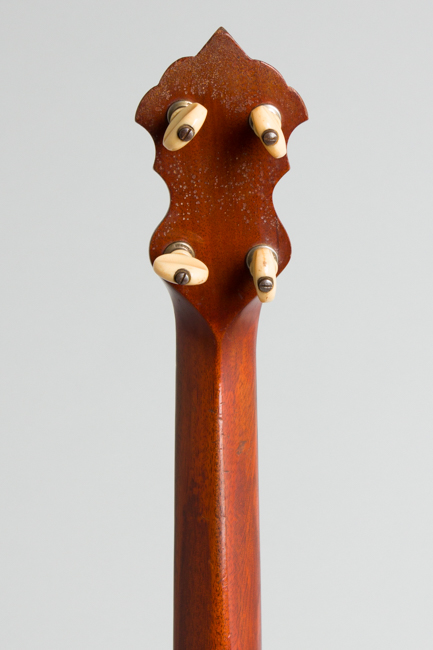 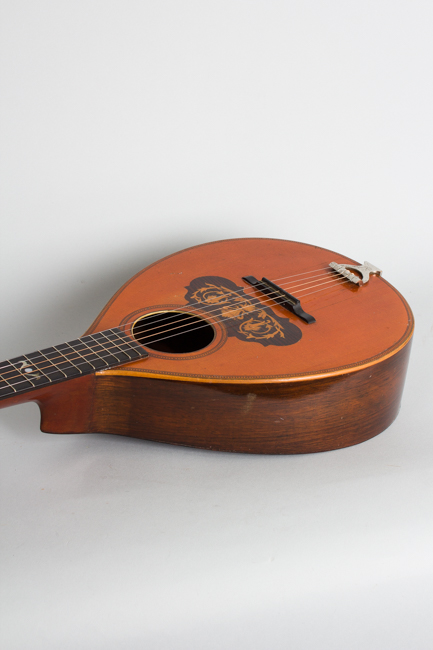 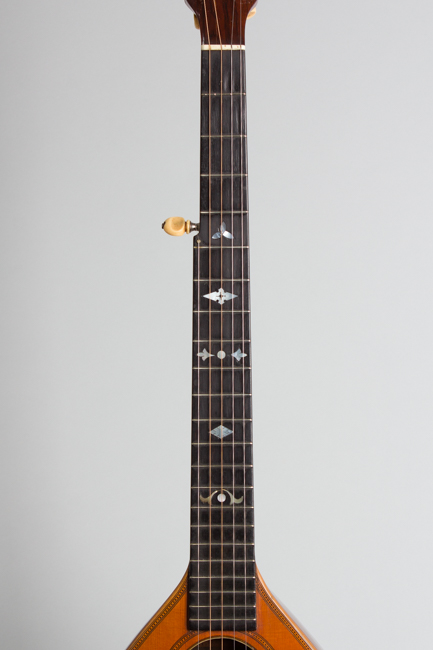 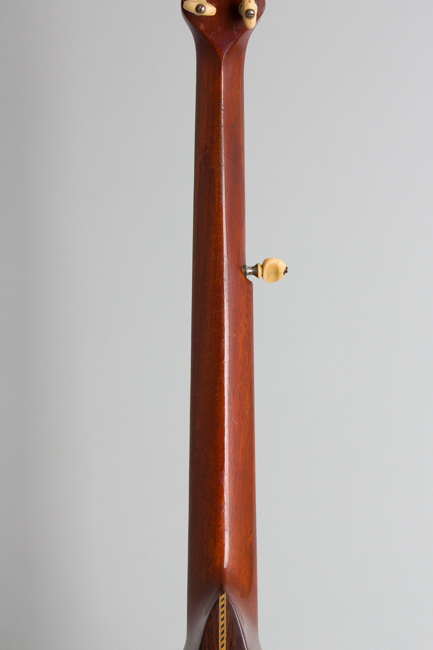 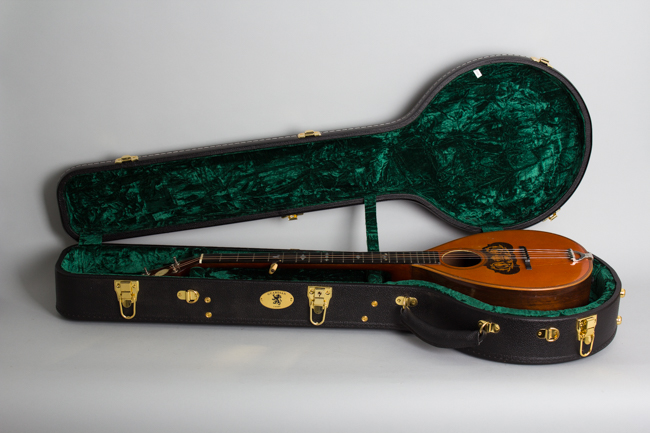 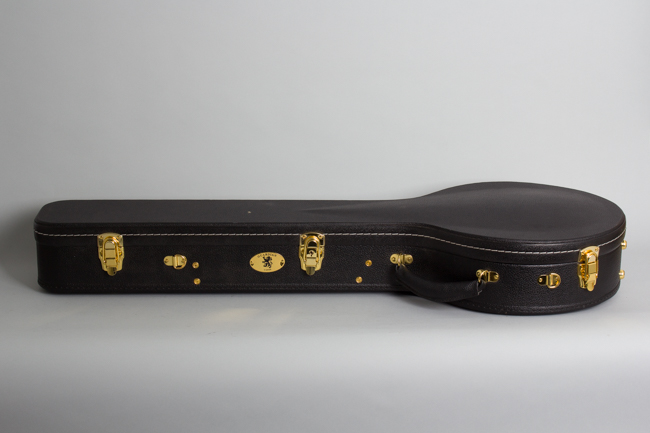 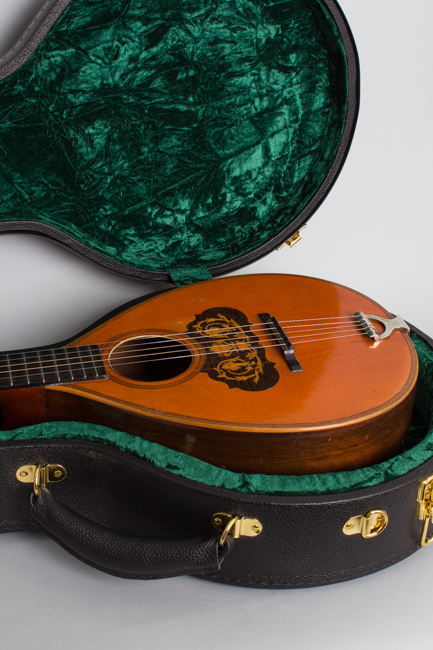 This Pollman Royal Mandolin Banjo is a very nice example of one of the more unusual crossbreeding experiments in American Lutherie. The instrument consists of a five-string banjo-style neck mounted on a flat-topped wooden body roughly the size and shape of a mandola. A product of the late nineteenth century boom in both banjos and mandolins, this hybrid makes a claim to being both at once! Tuned and played like a 5-string banjo, it has a delicate and enchanting sound more like a small guitar or lute.

These are thought to have been made for August Pollman's New York based company by Pehr Anderberg, a Swedish-born luthier who also worked for Bay State in Boston. They are superbly made using very high quality materials and construction details throughout. The solid spruce ladder-braced top has a mandolin-like pickguard with a floral stylized wood marquetry inlay against a brown inlaid wood background. The top is bound with ladder-pattern wood marquetry as is the soundhole ring. The back and sides of the vaguely pear shaped body are beautifully figured Brazilian rosewood. The varnish finish on the spruce top has a deep amber tone.

A brand on the backbrace reads "Pat. May 3, 1887". The metal trapeze tailpiece reads "WM. GERKE, Prov. R.I., Pat'd Jan. 31. 1888". Five different shaped mother of pearl inlays adorn the fretboard. The banjo friction tuners are stamped "pat. May 1888". Inlayed in the headstock is an ivoroid disk with "August Pollman's ROYAL Mandolin Banjo" and the patent date.

Beautifully made but somewhat delicate, these Pollmans rarely survive in as fine condition as this one. One was famously used in a prop in noted photographer Alfred Cheney Johnson's studio in the 1920's, gradually sinking into decrepitude as it appears in many of his portraits of the beautiful Ziegfeld girls. This one has survived with some old repairs but fully original, playing and sounding excellent, a great instrument for the turn-of-the (last) century banjo enthusiast or anyone looking for a truly unique sound. Overall just a very nice example of this delightful oddity, showing its 125 or so years less than most.

Overall this is a relatively clean and very playable instrument, even surprisingly so for being something in the neighborhood of 130 years old. The original varnish has checked overall (most heavily on the top) and shows some typical wear overall including dings, dents and scrapes but has no large areas worn away except much of the overcoat on the back of the neck. There are a few deeper chips and dings to the top and some scruffiness around the tailpiece. The back of the headstock has some odd spotting to the varnish.

There are some old repaired cracks on the instrument; the most visible are two oddly symmetrical grain splits on the top running from the back edge of the pickguard to the rear edge on either side of the strings. These look to have been sealed up decades ago; there is no touch-up so they are quite visible but not open. The back has a number of grain splits off the center seam, all sealed but again not overfinished. The back/side seams have been visibly resealed along much of the rear rim.

Everything on the instrument appears original and functional including the wooden bridge, friction tuners and special tailpiece. The celluloid disc on the headstock has lost some of the stenciling but has not shrunken and fallen out as many have. The fingerboard and original thin frets show some play wear in the lower positions; the bone nut appears to be a very old replacement which spaces the lower strings to avoid these spots! Despite the foregoing catalog of defects this Royal Mandoline Banjo is still something of a miraculous survivor of the late 19th century; not too many of these rather fragile instruments have survived in playable condition at all. This one plays very well with a truly enchanting sound; it is housed in a nice modern HSC replacing whatever lost canvas or leather case it might have had long ago. Overall Very Good + Condition.
×