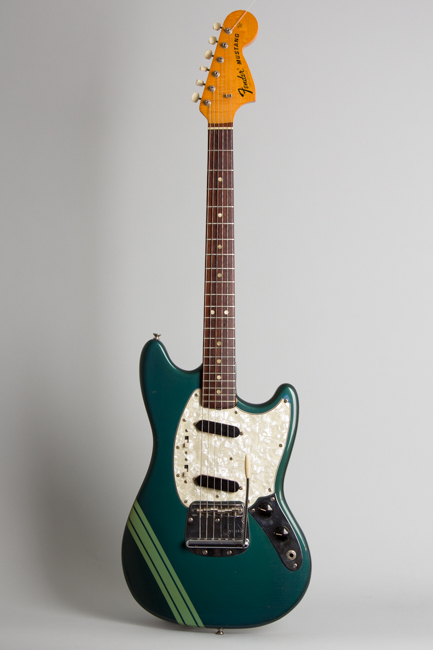 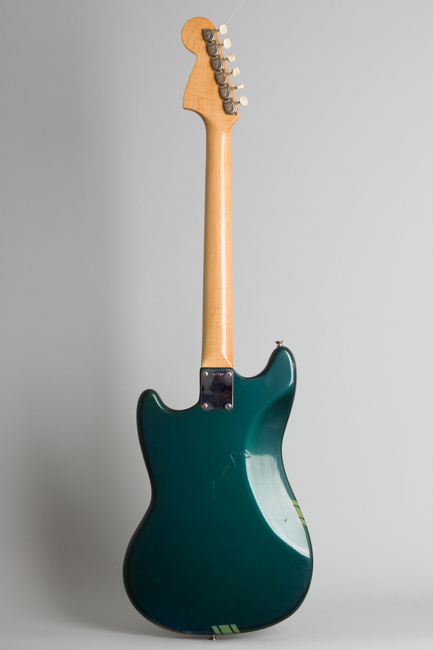 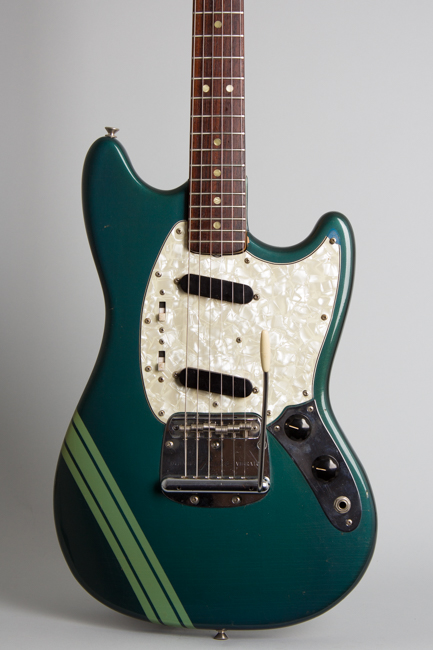 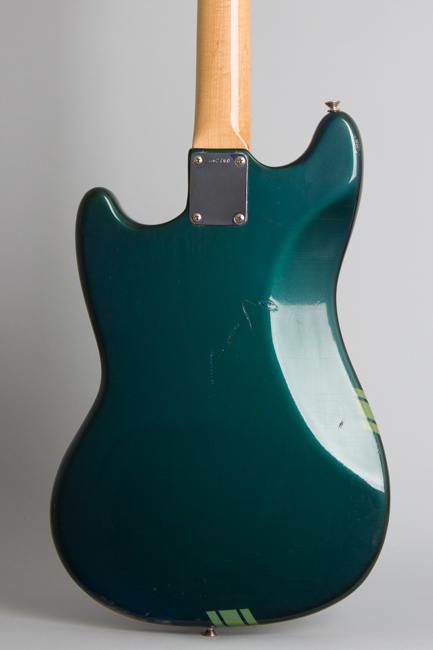 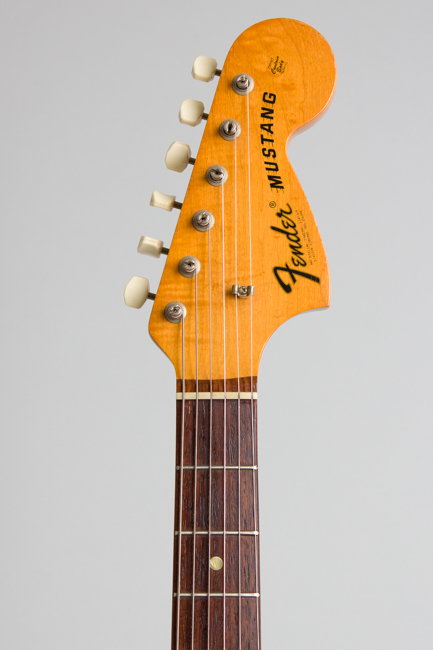 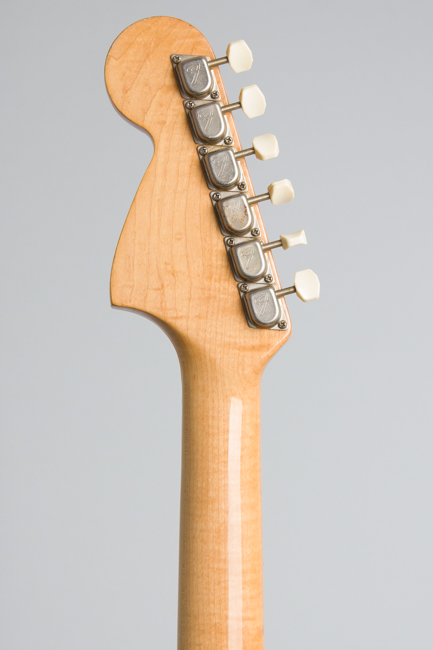 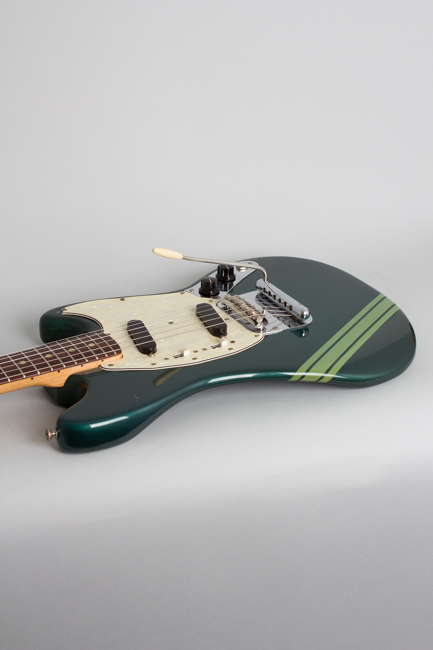 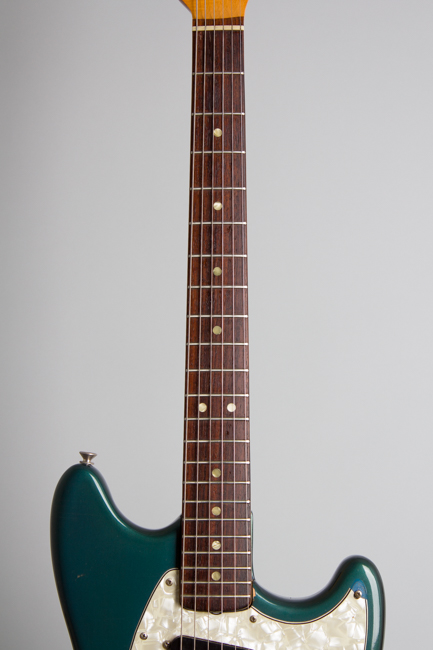 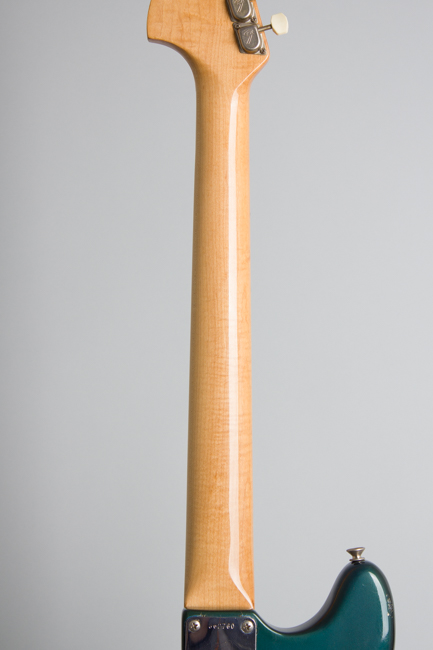 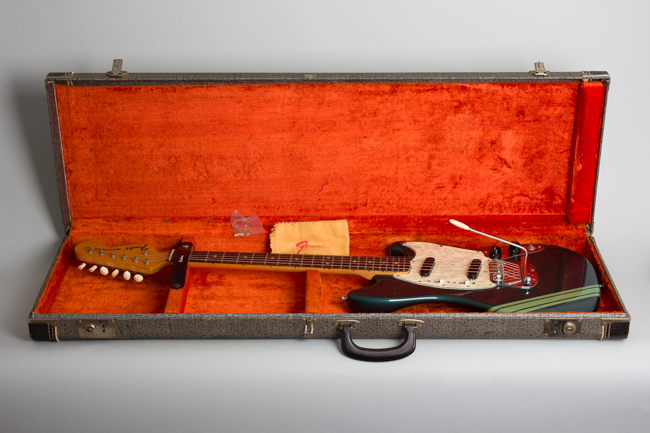 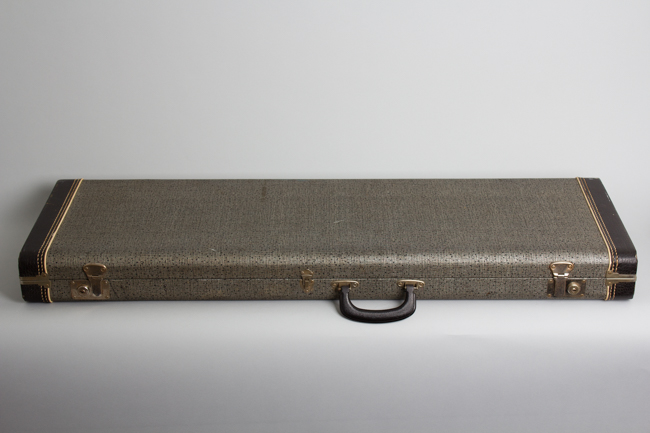 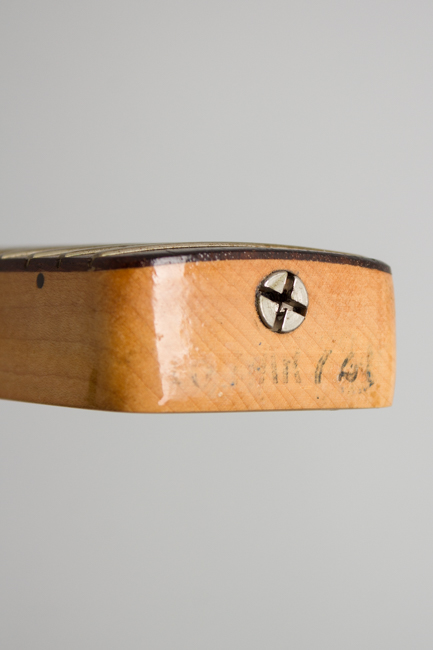 This is a very nice example of the most popular-for-2022 version of the ubiquitous Fender Mustang, the "Competition Blue" model from the turn of the 60s-70s. This particular guitar was built fairly late the run for this rather whimsical "Competition" version of the model, with the snazzy Lake Placid Blue metallic "car" finish, "racing" stripe on the body and pearloid pickguard, but a natural headstock. Within the next couple of years after it was made the finish options for the model were changed to sunburst, natural, or black and the super snazzy "Competition Mustang" series was retired under the checkered flag.

The Mustang was Leo Fender's last major original design before the CBS buyout, launched in mid-1964 to immediate success. The Competition models were introduced in 1969, with more contoured bodies and automotive themed hot rod trim that seem particularly suited to a guitar sharing its name with Ford! By the early 1970s the proliferation of cheaper Japanese guitars had undercut the market and sales were down, but the easy handling 24" scale Mustang endured through the decade as a classic in its own right. This one has more date markings inside than many from this decade; the neck is clear-dated MAR 72, the pots coded to the 5th week of that year, the lead pickup ink-stamped "7202" and "May 1" stamped small under the pickguard.

Except for the lack of a matching headstock, the features of this Mustang remain nearly identical to late 1960s models. The neck has the typical lacquer headstock over poly, which fender did in this era to "set' the decal properly. The neck even has a bit of figure in the maple. One quirk on this guitar is the use of white switches, leftovers from the earlier white/tortoise pickguard version of the mustang that was retired in 1969. All solder joints are original confirming these are factory fitted to this guitar instead of the usual black ones; CBS did not like to waste anything!

The humble Mustang has proved a timeless favorite of countless garage and pro bands from the 1960s and '70s until today, forever exceeding Leo Fender's original intentions as a simple but effective student instrument. The Competition Blue variant in particular has earned special notice of late due to an enduring connection to Kurt Cobain, who is reputed to have called his rare left-handed one his favorite guitar.

Overall this is a nice example, remaining original with some minor wear and tear but no damage or repairs. All appears original and complete except the nearly always missing bridge cover is indeed gone. The finish has some chips, dings and dents, but no large areas of loss except one decent-sized rubbed away area on the back/rear edge. The back has some dings and an area in the center of strap or cord burn lines. The color has darkened and "greened' somewhat as is usual but remains truer than many and does not appear to have spent much time in smoky environs.

The pickguard is very prone to shrinkage; this one has lost the lower front corner, but otherwise is in very nice shape with only minor pulls at the screw holes. The headstock finish has some long check lines, the decal is perfectly preserved. The frets have some light wear in the first position but the guitar plays fine. It includes the original hard case, still the traditional '60s-style grey model but a bit more sturdily built. Excellent Condition.
×