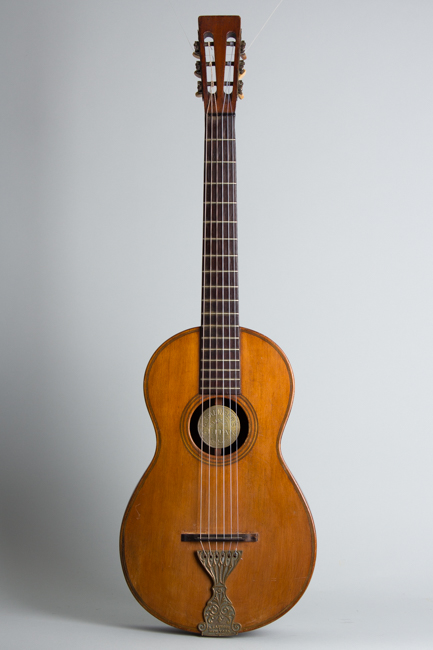 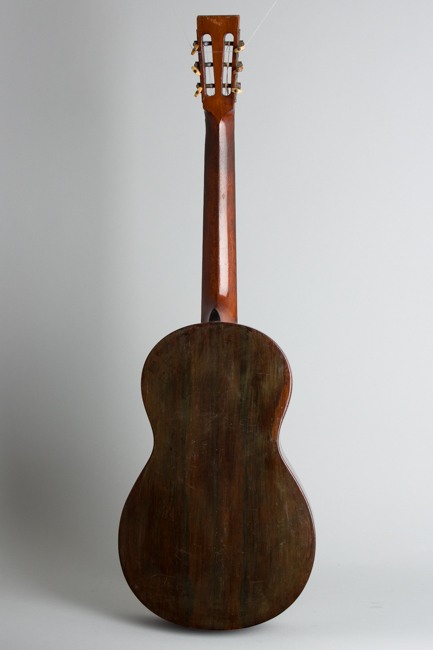 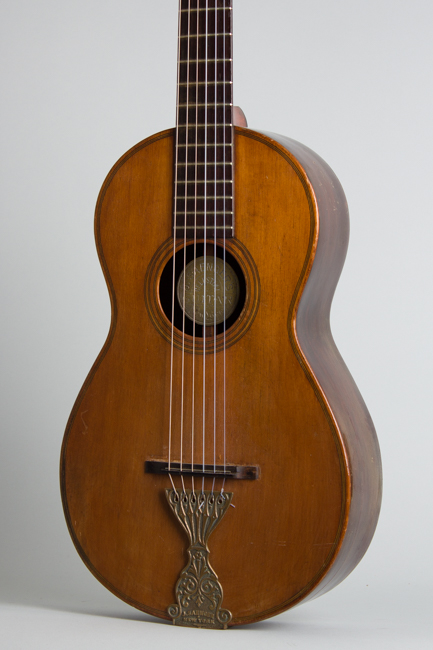 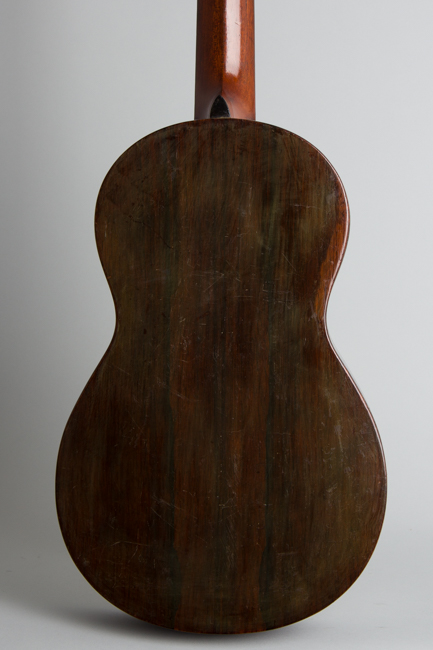 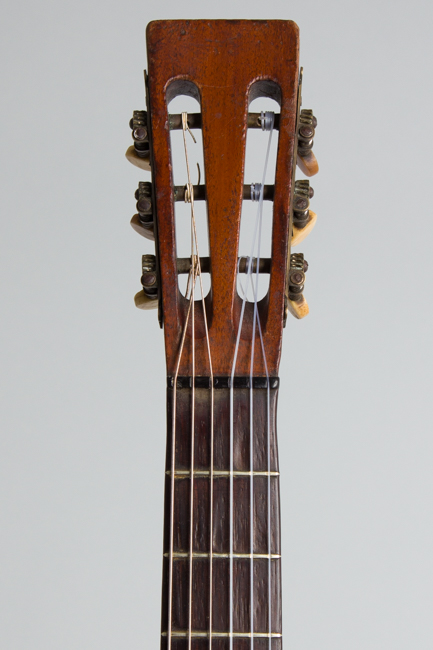 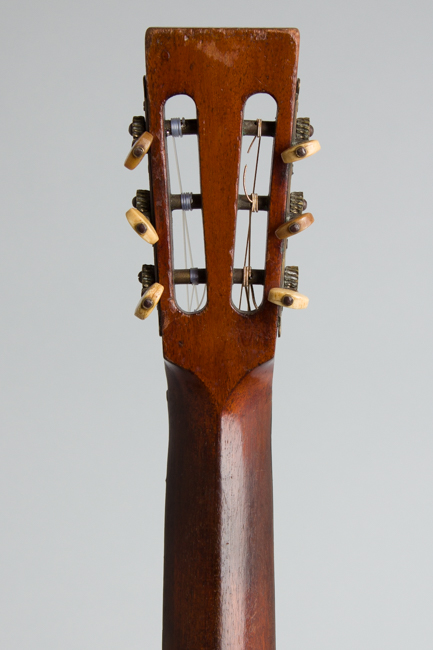 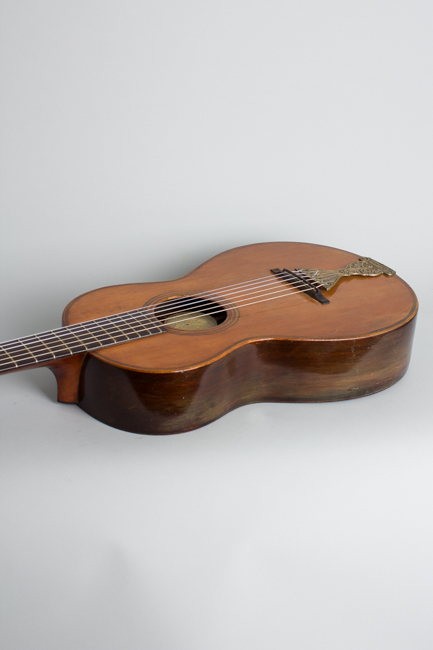 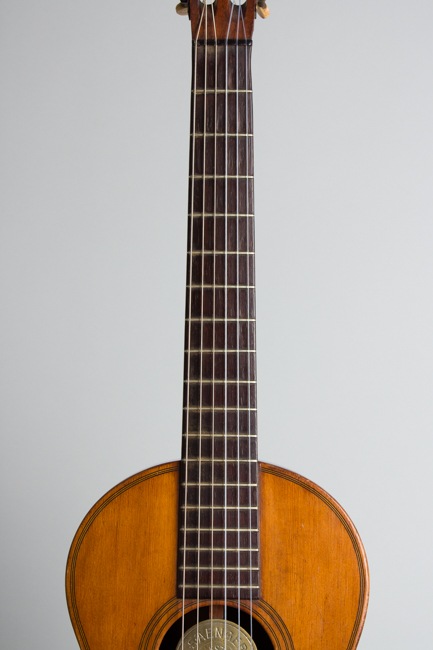 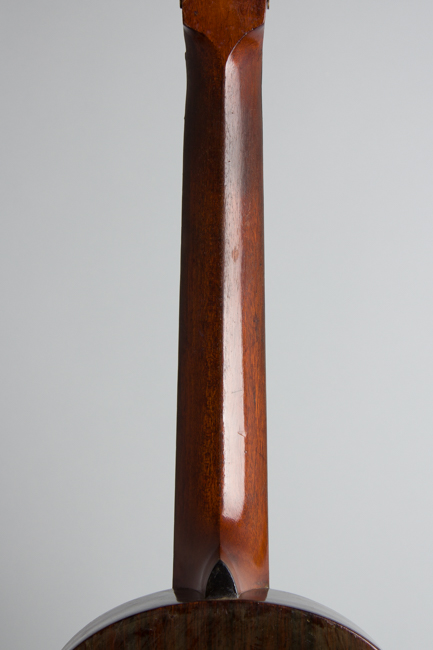 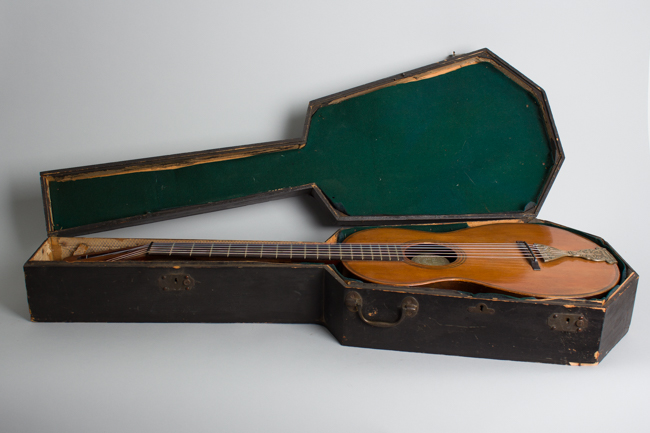 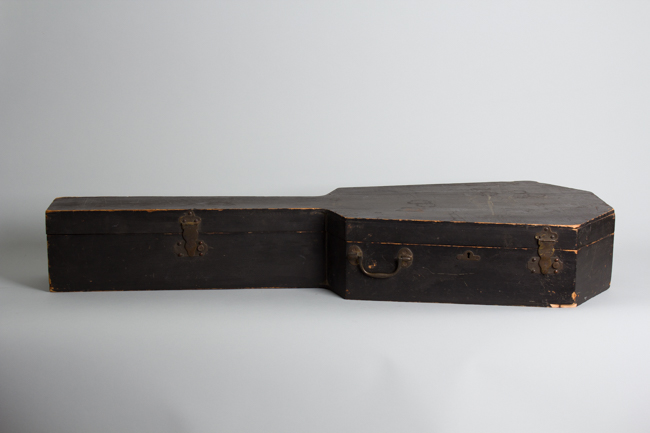 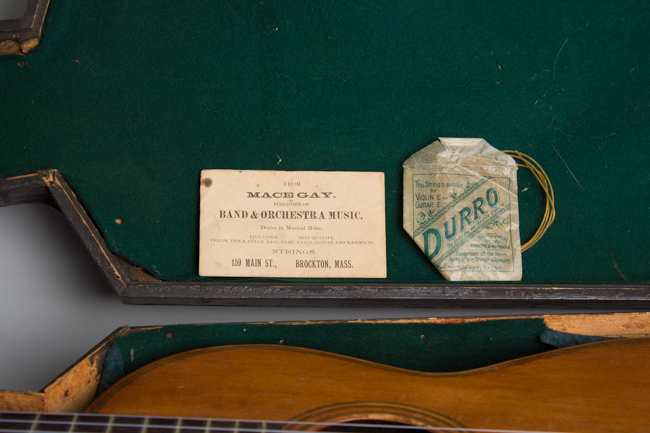 This charmingly named "Celestial Guitar" is a close copy (unauthorized, almost certainly) of the unusual Tilton's patent guitars built in New York and Boston starting in the mid-19th Century, incorporating "Tilton's Improvements". William B. Tilton was certainly an original thinker; his patented "Improvements" to the guitar consisted of a wooden center bar that ran down the inside of the guitar like the dowel of a banjo, intended to relieve the main stresses of string tension stress on the top.

Other novel design elements poached from Tilton include a conspicuous heavy metal tailpiece feeding a string-through wooden bridge and the curious metal disc suspended on the center strut visible the soundhole, with the branding "Saenger's Celestial Guitar". Whether or not these "improvements" actually resulted in a better guitar, this is an absolutely distinctive very well-crafted little guitar with a nice tone.

Tilton's patent was granted in 1854 and expired January 1871. It is likely this guitar was made around then or sometime after as it does not bear Tilton's name but is very closely patterned on Tilton labeled instruments. Jonas Saenger was a music dealer in lower Manhattan from the mid-1860s up into the 1890s. He seemed to specialize in accordions but also offered guitars; it is not known who actually built this instrument but the parentage of the design is unmistakable! The headstock has small stamps on the top edge of "42" and "1531"; in the standard 19th century pattern we would assume the former to be a style number and the latter a serial number, but really the reverse could be true as well!

This guitar has very dark Brazilian rosewood back and sides. The spruce top is unbound with a 5-ply inset off the edge in the violin manner. The top grain runs straight; many actual Tilton instruments were built with an unusual diagonal grain top that does not age well. The neck is mahogany with a dark rosewood fingerboard, shaped in the typical 19th Century shallow "V" profile. It has an ebony nut and beautiful engraved brass plate tuners with bone buttons. The elaborate heavy brass tailpiece also bears Saenger's name.

This guitar is sturdily built for its age, it has had many repairs but remains very playable with a sweet sound with more top-end than many from this period. It can be recommended for use in situations such as Civil War re-enacting or authentic Western or minstrel re-creations where an accurate and functional 19th century style guitar is an aesthetic requirement. It plays well with nylon or gut strings as intended and includes the original coffin case, and how many guitars can claim to be "Celestial" after all?.

This fascinating nineteenth century guitar has seen a lot of work performed over the past 150 years or so, but remains a lovely playable instrument using the elements of one of the era's more celebrated designers. While far from pristine but is still a fine very playable instrument, which is not always the case with guitars of this antique vintage. The finish is original or at least all 19th century, with some touch ups and overfinish mostly related to the repairs. There is micro-checking, dings, dents and scrapes overall but only some fairly minor playwear for 150+ years.

There has been quite a bit of repair work, most notably a number of cracks to the sides neatly repaired. The rosewood back is possibly a replacement of the original, but has quite a bit of age to it and is clearly still 19th century. The finish to the back and sides has some clouding but is original, at least to when the first round of repairs was done. The top finish is original and shows less wear than many. The guitar retains the charming medallion on the center strut and elaborate brass tailpiece.

The rosewood fingerboard is original and well played. It has a slight radius unlike a typical flat 19th century fingerboard. The small-wire frets appear 19th century; it is not possible to say they are definitely original but they look over 100 years old and shows some playwear in the lower positions. The bridge is original, it has been reglued more than once. The neck angle is excellent and the guitar is very easy to play.

The guitar is currently strung with synthetic gut strings for a more period-correct experience, but in our experience Tilton's design makes his instruments adaptable to silk & steel stringing if desired, which is not true of most 19th century guitars. This guitar has obviously had an eventful life since the industrial revolution was new but remains a delightful historic and fully playable instrument. The original coffin case is included, a bit rickety but functional. Very Good + Condition.
×