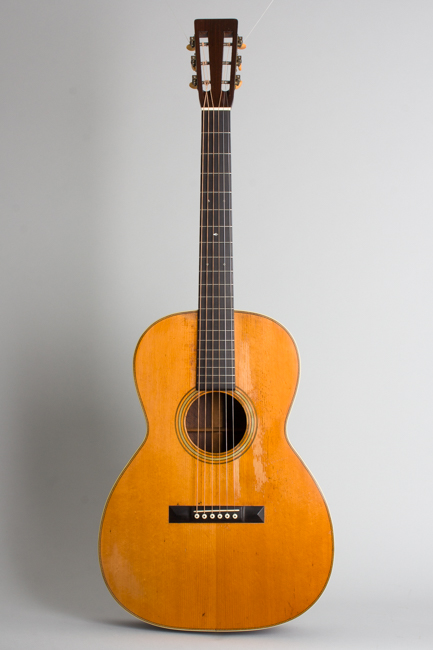 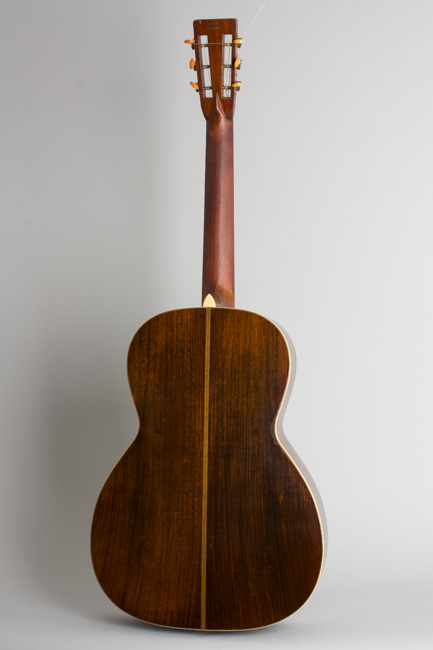 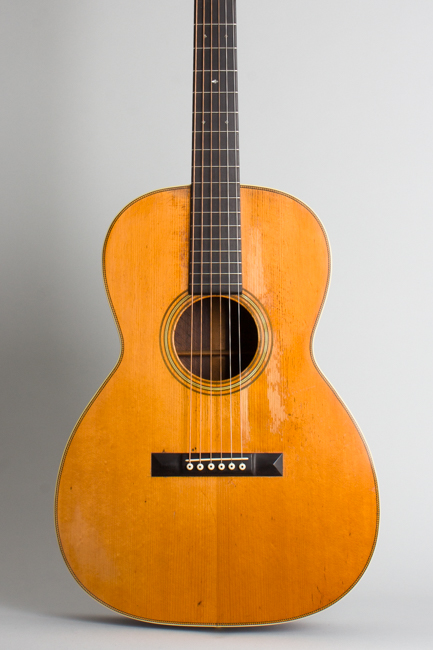 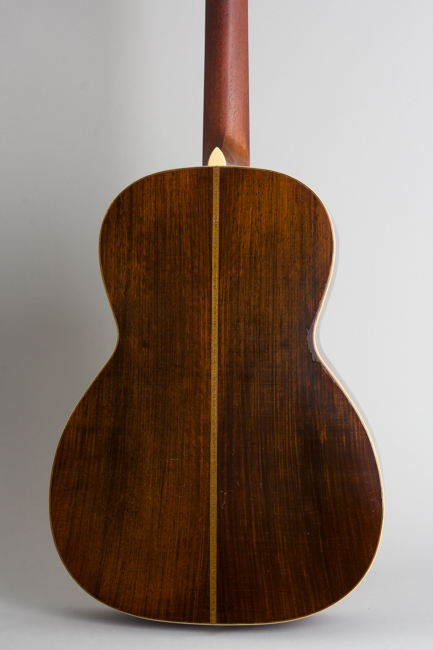 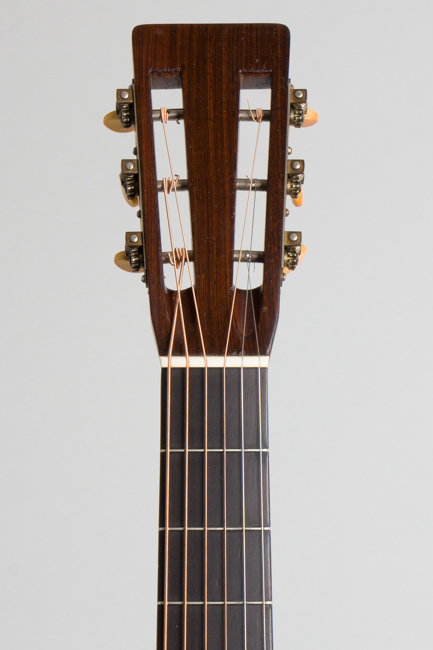 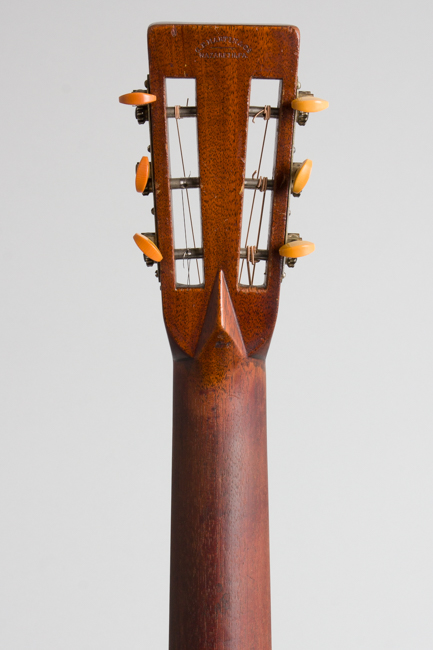 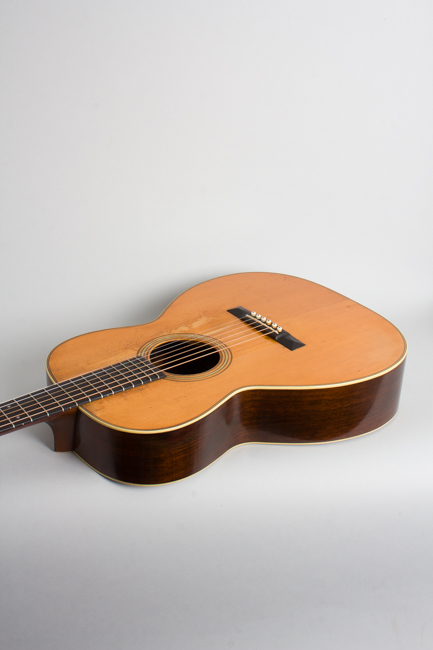 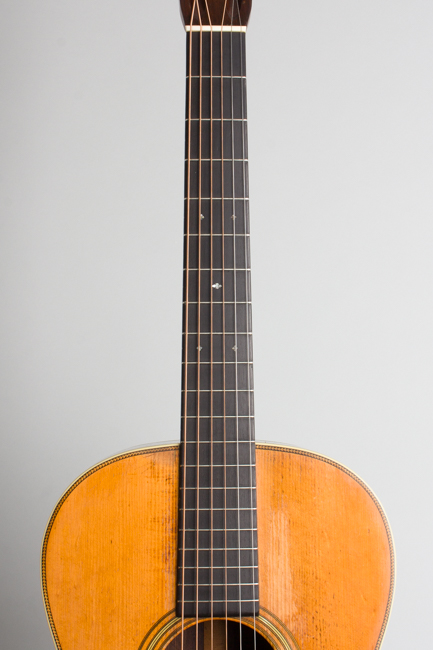 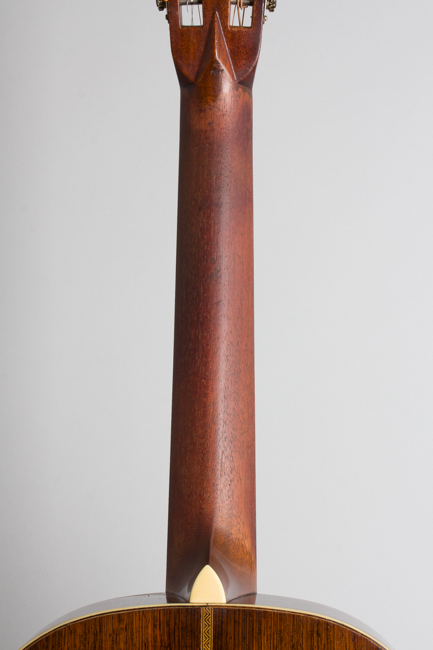 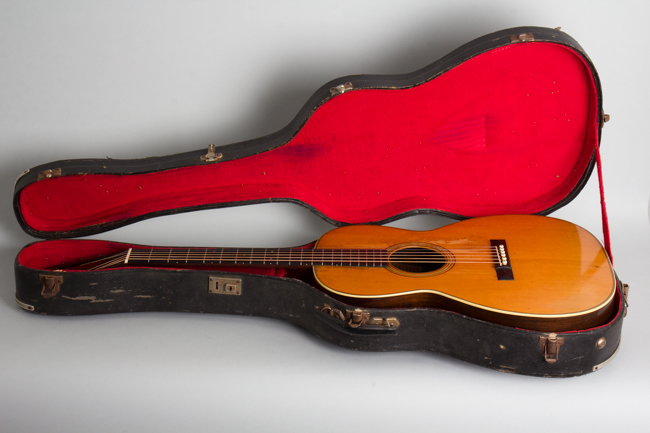 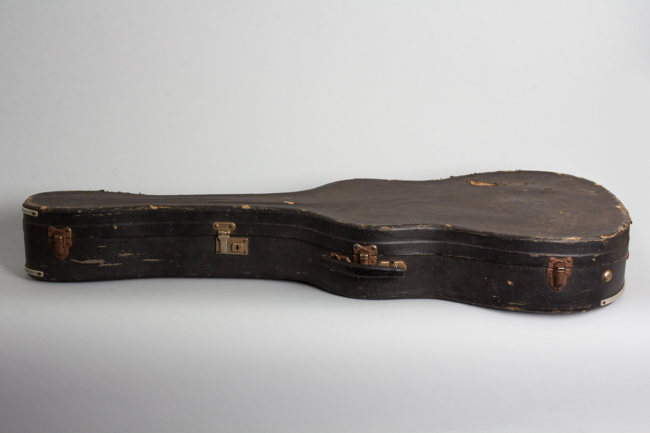 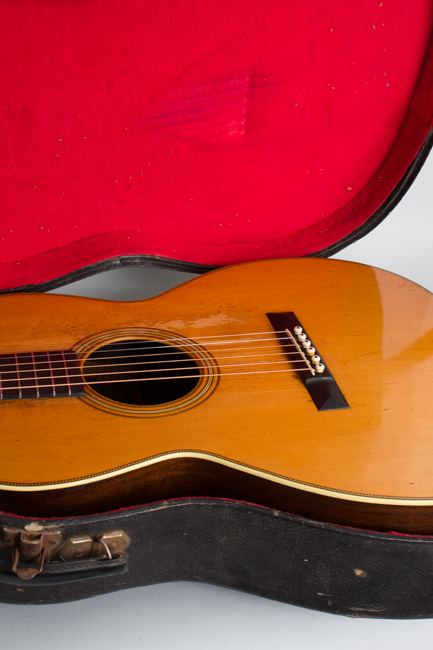 If your fretted tastes run to 12-fret flat tops, then this 1929 000-28 is about as close to the perfect guitar as has ever been made. This model was Martin's largest standard body size at the time, and while it was not the most expensive instrument they offered all models above it were built with pearl trim that raised the price point without necessarily making for a better playing or sounding guitar. The style 28 is bordered with the wood marquetry that has gone down in Martin legend as "herringbone", a defining part of the company mystique.

It was also by this point a solidly steel-string guitar, which was a then-recent development. Through the 1920s the Martin company gradually transitioned their line away from the traditional gut stringing, but up into the latter years of the decade many of the more expensive Brazilian rosewood guitars were still built in the older gut-strung pattern unless specifically ordered for steel. It was not until 1928 that the 000-28 was officially listed as a steel-string guitar, though a number had been already built that way.

In 1929 the 000-28 had a list price of $85; while that seems like a trifle today, to many at the time it represented a considerable investment. Still, it was a real bargain in a professional quality instrument; at the time even a plain professional tenor banjo would run at least $100, and a Gibson L-5 archtop was $275!

The 15" wide 000-28 is a huge sounding guitar then and now, with plenty of definition even when played hard. This helped make it a popular choice for period vaudeville and early "hillbilly" entertainers, since it offered a lot of bang for the buck. As evidence of this, 1929 was the peak production year for the model, with all of 82 being built. The next year the sales dropped to practically nothing, and only 2 were shipped as the depression set in and a guitar this expensive often simply sat in dealer's cases.

Simultaneously the 1929 introduction of the OM-28 with its shortened body and 14-fret neck spelled the end for this "standard" 12-fret model. The new "Orchestra Model" pattern ushered in the era of the modern flat top; by 1934 the "old" 12-fret 000-28 was completely replaced by the 14-fret version for many decades to come. Total production of steel-string 12 fret 000-28s cannot be calculated exactly (Martin sales records do not specify the stringing) but between 1925 and 1934 only 267 examples of the model were sold in total, so by any standard this is a very rare guitar.

This particular 000-28 was built in late 1929 just as the stock market was crashing; it has survived the years well, showing some typical signs of use but remaining a nicely original guitar. The back and sides are beautiful straight-grained Brazilian rosewood, the neck mahogany. The Appalachian spruce top is bordered with celluloid around that now-mythical Herringbone wooden trim, the back has celluloid trim and a zig-zag wooden backstrip and the soundhole multiple rings of wood and celluloid. The unbound ebony fingerboard has five small pearl diamond inlays and the original bar frets. The Waverly tuners have engraved baseplates with ivoroid buttons. The neck has a wider nut typical of the 1920s and a fairly shallow softly rounded "V" profile.

With the light, scalloped early steel-string braced top on the 15 1/4" wide featherweight 12-fret body this is simply a wonderful instrument, with a spectacular and powerful sound for any style of play. It responds well to anything from gentle fingerpicking to vigorous flatpicking. This would be the ultimate instruments for a truly authentic 1920s-style fiddle band, but really excels in just about any playing style. Simply a wonderful find in a 12-fret large-body, steel-string rosewood Martin now well past its 90th birthday.

Overall this is a well-preserved guitar with some typical wear for its age and some common relatively minor repairs to keep it playing into another century. The very thin original finish shows numerous dings, dents, and scrapes overall, with a decent amount of pickwear on the top, mostly in the region around the fingerboard and below and beneath the strings. The top finish remains largely original but there are some topical oversprayed spots over this wear, a good deal of which has been worn through again. The bass side of the top has some marks where it appears some additional overspray was mostly polished off long ago. No other oversprayed or touched up areas are visible on the guitar except to the top.

The finish on the back of the neck is almost completely worn away to the wood from headstock to heel, resulting in a vary comfortable playing surface; there are some shallow dings and dents mostly worn smooth again. Amazingly for a 90+ year old rosewood Martin there are no crack repairs, which is both unusual and delightful. The ebony bridge is well done reproduction, but set up with a short bone saddle not the 1920s long-saddle pattern. There are marks around it from the removal of the original, with one small chip fill but nothing too conspicuous. There are a couple of tiny pinholes of unknown origin just above its front edge by the A and E strings. These were filled with some sort of glue long ago and can be seen from the inside. The rest of the interior is clean, the original very thin maple bridgeplate has a small maple patch added just over the pin area as reinforcement.

The neck has been neatly reset, with minimal scarring at the heel. The bar frets appear original; they were probably reinstalled after the fingerboard was trued and re-crowned, as they show virtually no wear. If this has been refretted it would be the neatest and most authentic such job on a 1920s Martin we have ever seen. The tuners are the correct originals; small adjacent filled screw holes indicate the plates were turned around at one time.

This is a truly very fine-playing guitar, powerful-sounding and extremely articulate even when pushed. We rarely find steel-string Martins of this period that have not had more extensive wear and/or damage; this is far from a pristine guitar, but considering its age and rarity is better preserved than many. Overall Very Good + Condition.
×