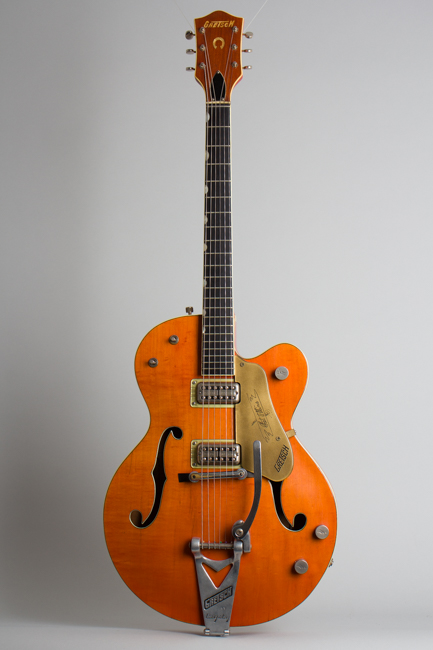 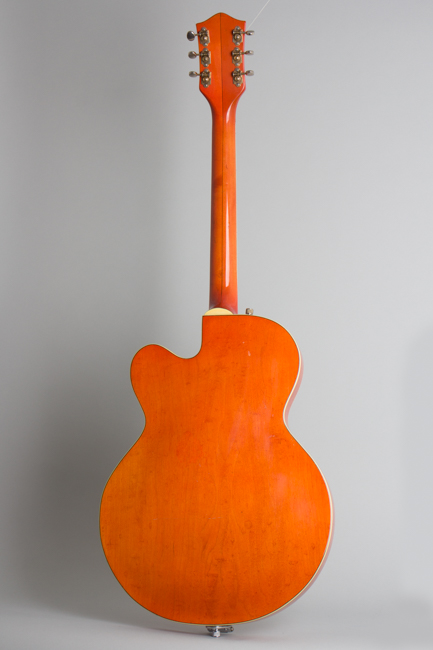 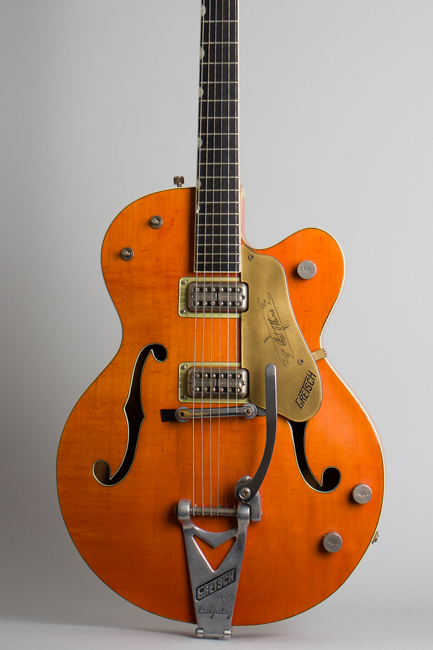 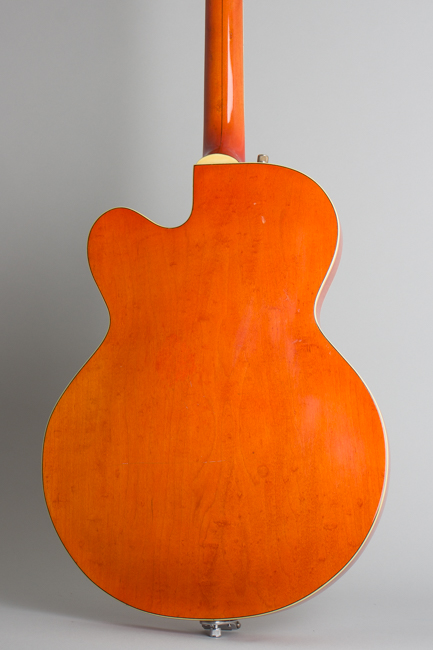 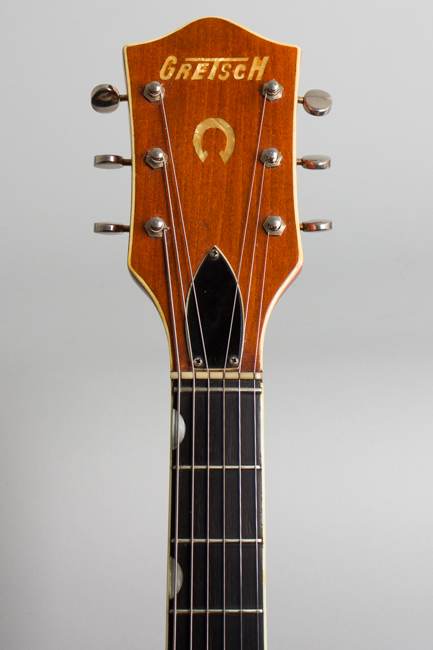 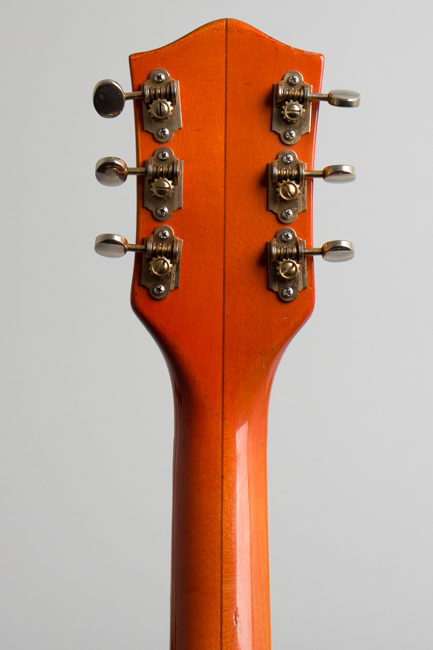 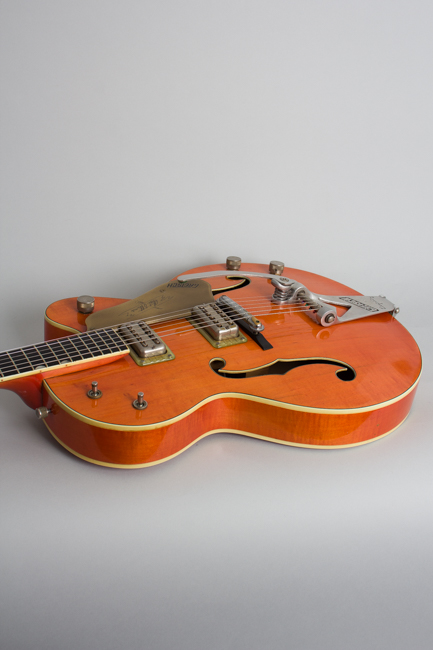 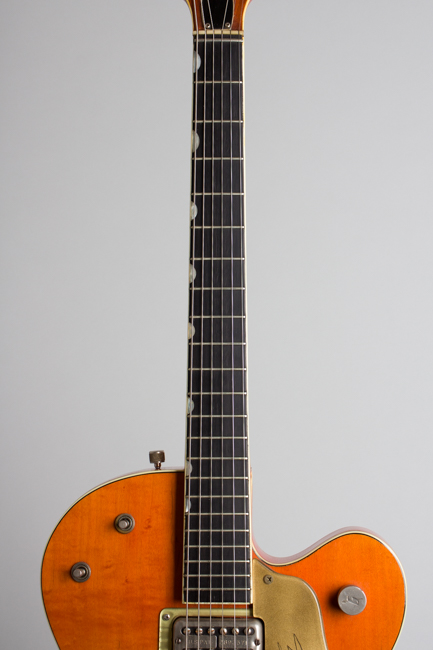 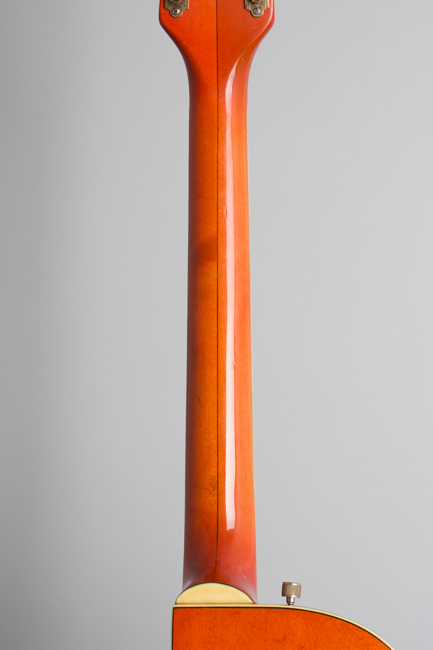 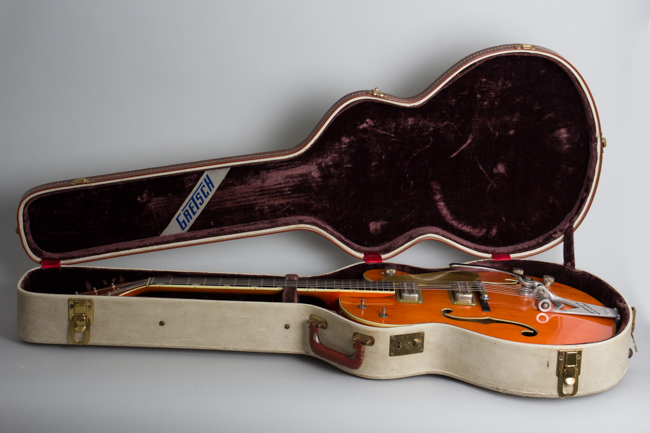 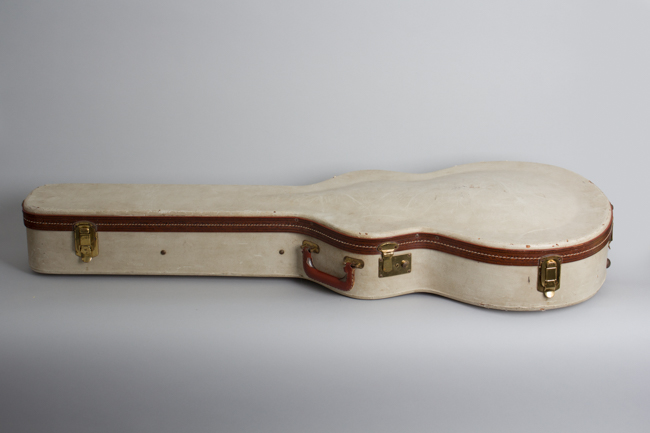 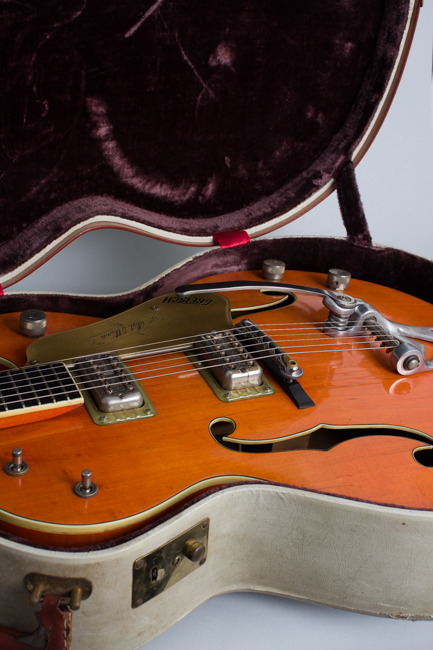 This super cool orange Gretsch is from 1961, the last production year of the original single-cutaway Chet Atkins Model 6120 guitars. The serial number indicates it is was built fairly early that year, but still shows most of the final features of the model. This ultimate evolution of the original 6120 is built with a thinner 2.25" deep body than previous years, giving it an almost thinline feel. This was seen only in 1961, combined with a new-style shorter neck heel introduced at the same time. Later in the year a standby switch was added on the lower bout, along with a slightly modified pickguard.

The Model 6120 is considered to be the Gretsch company's single most iconic creation in its original single-cutaway form. This instrument evolved constantly between its introduction in 1955 and this last year, but all versions have proved to be classics in their own right despite numerous detail changes. The "Western Orange" finish on a just-under 16" body was one constant; this guitar sports a slightly translucent medium shade as seen on the 1962 and later double-cutaway 6120's. While those are well-regarded guitars, to most Gretsch fans they never really capture the magic of the earlier single-cuts.

This 6120 features a stock Bigsby tailpiece, two "patent number' Filter'Tron pickups and the heavy "trestle" bracing used only from the late '50s through this year. This combination of features provides the distinctive version of "That Great Gretsch Sound" most familiar from Neil Young's Buffalo Springfield/CSNY era and early solo recordings and Pete Townshend's work on WHO'S NEXT. Many players of course most associate this Filter'Tron model with Brian Setzer from the Stray Cats on. This guitar is a wonderful example of the final 6120 and a real killer "Pride of Brooklyn" Gretsch.

This is a truly superb example, an fine player with an excellent neck angle, which is often not the case with older Gretsch guitars. The neck has never been reset, the factory just got it right this time! There is also NO binding distress at all, the other bane of the Gretsch fan. The celluloid is all intact with some typical light shrinkage but no cracks or outgassing. Overall the finish shows relatively minor wear, with some scattered dings, dents and scratches, the most notable being a couple of deeper dings into the upper back. There are several fine laminate checks to the top, visible but not a structural issue.

The hardware is all correct and nearly all original. Just the rear hinge section of the original Bigsby has been replaced, along with the rear strap button. We would assume the original aluminum anchor piece cracked, as they sometimes do. The pickguard is original; the gold paint on the underside has darkened and clouded somewhat. The original Waverly tuners are intact, the pickups, bridge, knobs etc. are all original. The bridge has some hand wear on the top bass side. The wiring is stock except the "mud switch" tone selector has been disabled by removing the caps; they are retained in a baggie in the case pocket. Most users find this switch more of an annoyance than a practical tone control, but it could be restored to function if desired.

As noted the neck angle is better than most, so the Bigsby and original rocker bar bridge are fully functional. An additional "Tru-Arc" bridge is included for use with an unwound "G" string if desired. The frets are original and crown is taken down fairly low with some visible wear, but the guitar still plays very well. With its unusually good neck angle and binding state this is a real gem of a 6120 even with its minor flaws. It is housed in the lovely original "Cowboy" case with some external wear but fully intact. Overall Excellent Condition.
×