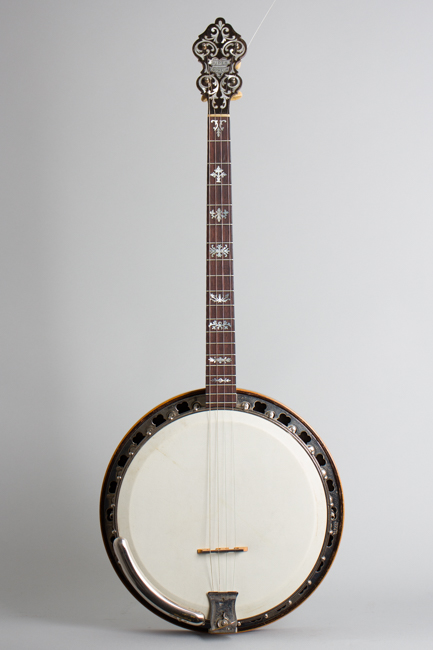 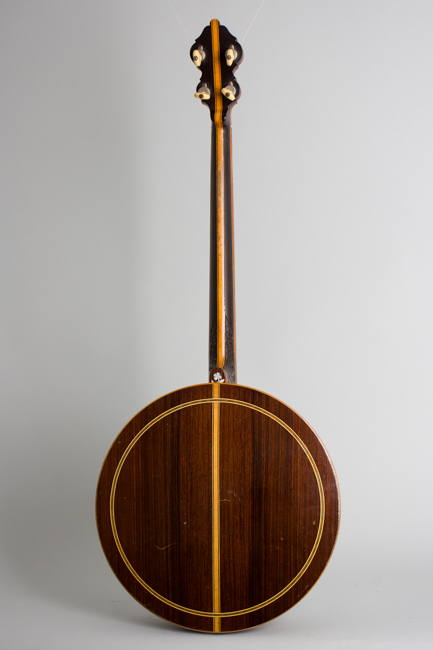 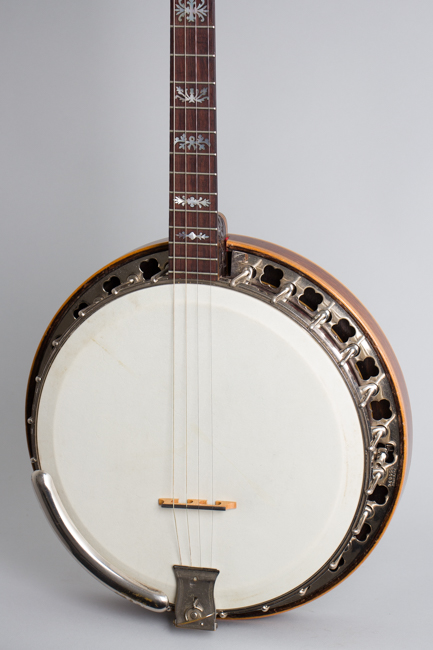 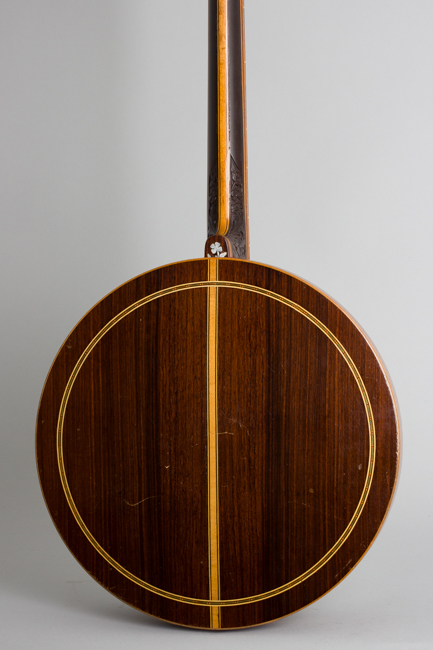 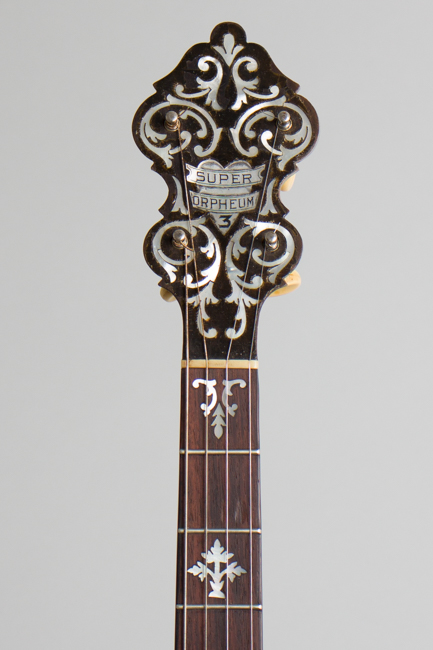 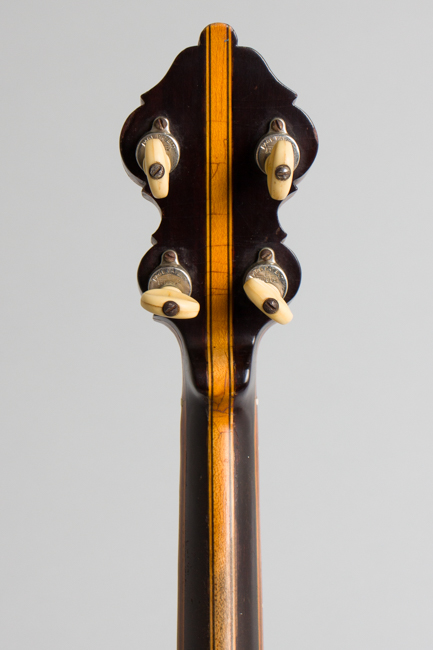 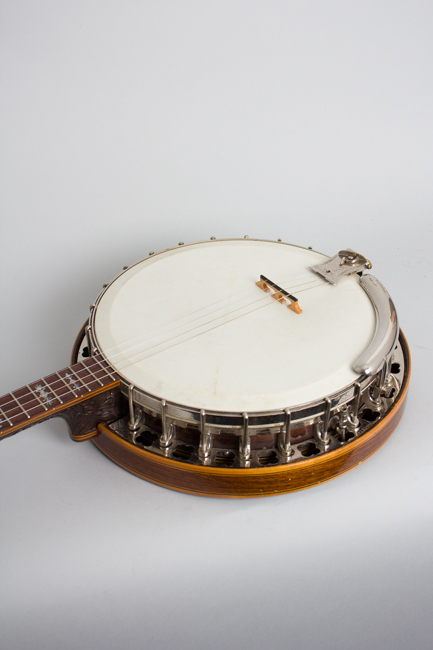 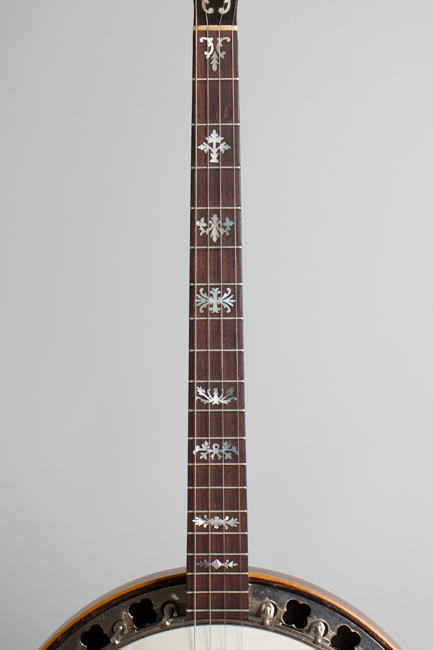 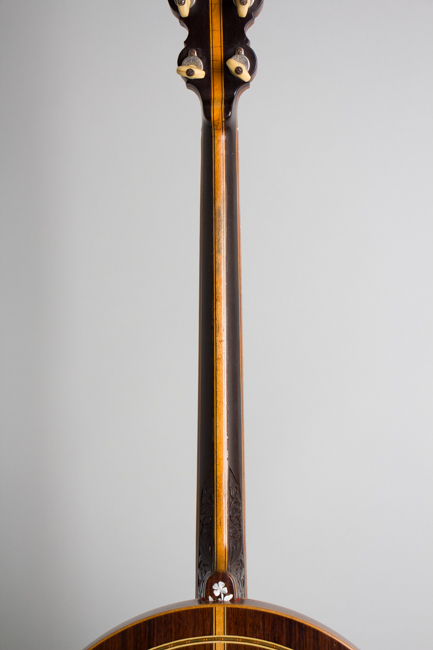 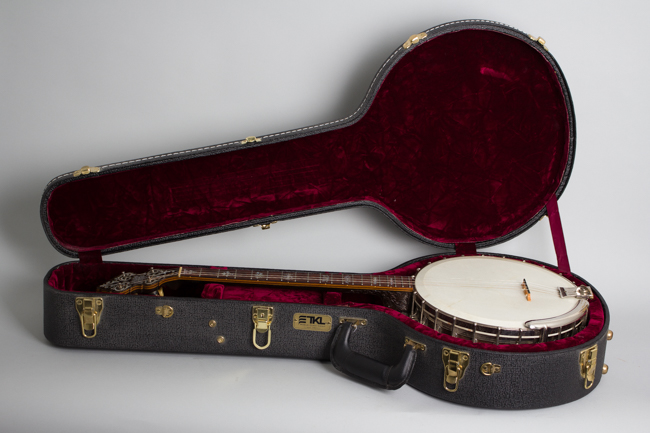 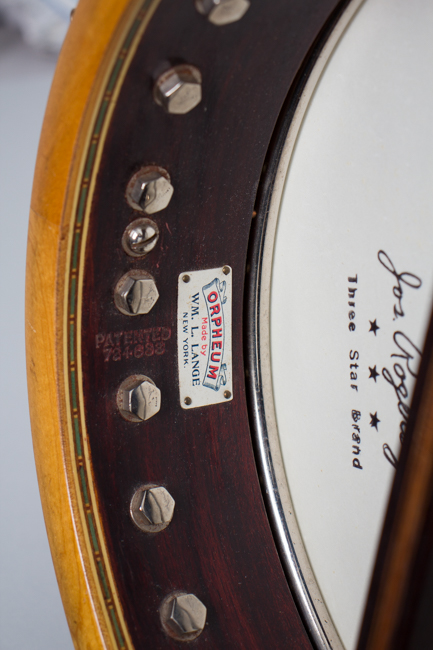 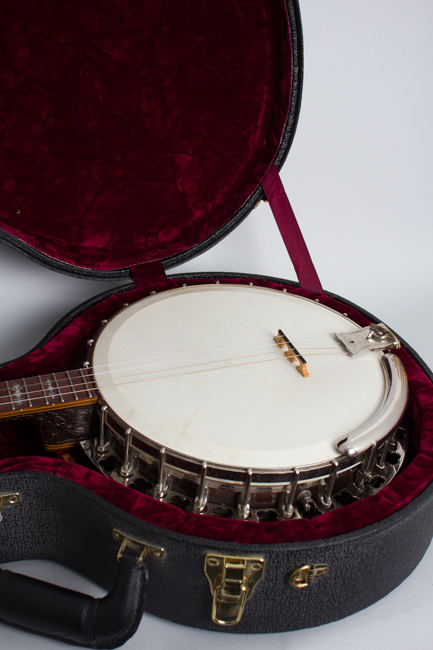 William Lange just really loved designing new banjos and his company marketed multiple distinctive lines in the 1920s. "Orpheum" had been his premium brand in the 1910s, when he had a partner doing business as Rettberg & Lange. Lange took over the operation in time to launch the revolutionary Paramount line in 1921, the first "modern" tenor and plectrum banjos and the standard for all subsequent 1920s makers. Orpheum was then relegated to mid-line brand name, with the low end of the price range catered to be a "Langstile" marque.

Later in the 1920's the marketing became less clear-cut when a "Super Orpheum" line appeared. These were professional-grade banjos with all the modern features, priced just below the Paramount range. Earlier Orpheum models had 17-fret necks, friction tuners and open backs but this very upscale "Super Style 3" has a 23" scale 19-fret neck, geared small-housing Page tuners, and a rim, arch-top tone ring, resonator and flange design very close to the Paramount standard. As a concession to price, things like the neck and resonator attachment systems are less elaborate.

Cosmetically this is quite a fancy banjo. The neck is made of laminated Indian rosewood "the finest material for tone" Lange claimed and maple while the rim and resonator feature rosewood as an external veneer. The resonator and rim have some neat marquetry work. The multi-laminate neck construction is similar to Paramount practice, with a prominent volute, carved heel and some nice pearl work on the fingerboard and heelcap. The headstock has very elaborate pearl inlay typical of Lange. The hardware includes small-can Page geared tuners, the standard hinged Paramount tail piece, "hotdog" armrest and thin flange with "cloverleaf" cutouts. There was once a flip-over mute attached to the tailpiece which is gone.

This is a very high quality tenor, an interesting part of the Lange story. The Super Orpheum 3 model was the high end offering of the mid-priced line and seems rare compered to most Paramounts. It may not have been on the market very long, arriving as Tenor banjo sales had peaked. This is a very fine playing and sounding banjo, in most ways quite the equal of its Paramount cousins and a more interesting rarity to boot!

This banjo shows some general light wear but remains largely original, playing and sounding very well. The all-original finish has some flaking and minor dings, dents and scrapes, but no really heavy wear. The hardware remains original except it appears for some reason all the hooks have been replaced. The hole and notch for the missing mute can be seen on the original tailpiece. The hardware shows some general plating wear but nothing too serious.

The head is an older but not period Rogers genuine calf, excellent sounding, offering a slightly mellower tome than a modern equivalent. The neck is straight, it has been neatly refretted and playability is fine. The maple bridge is more recent. This is a very nice 90 or so year old example of a professional grade tenor in a style that one rarely sees. It is housed in a more modern HSC. Overall Excellent - Condition.
×