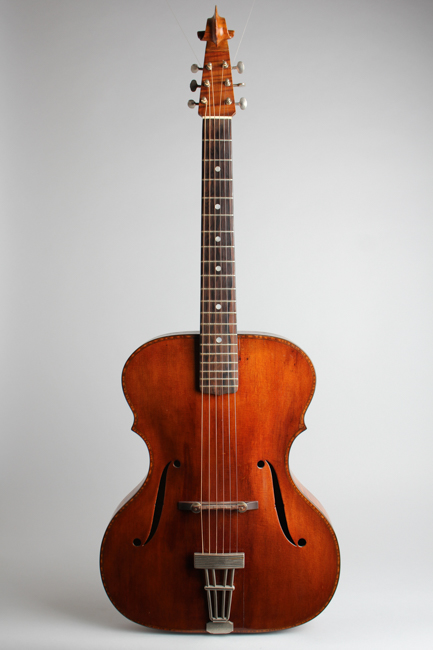 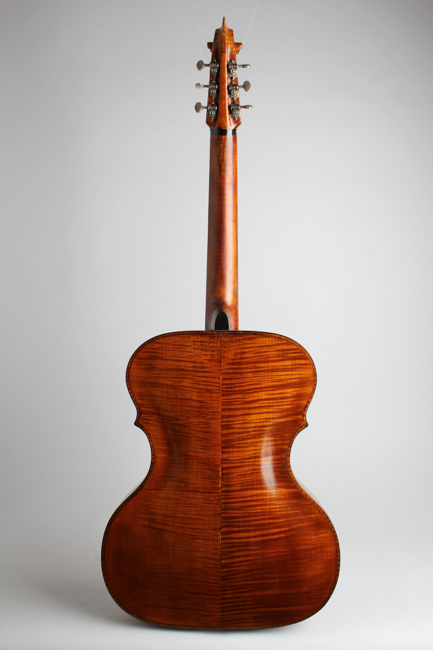 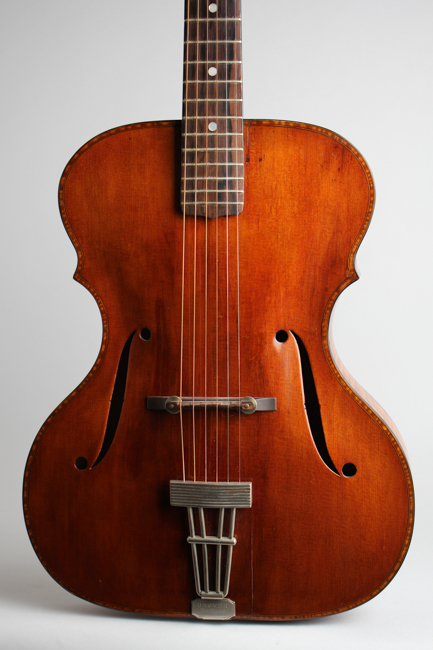 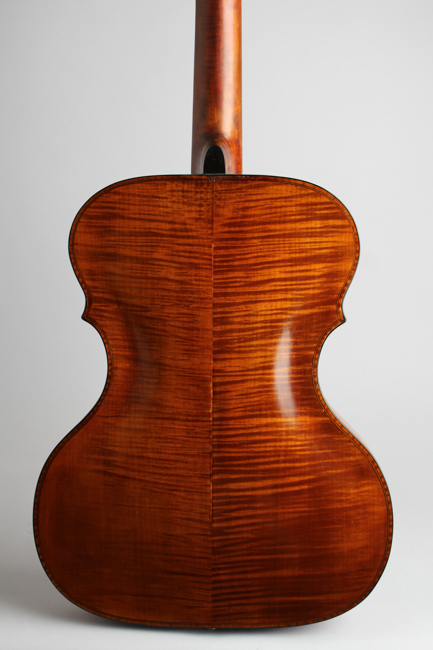 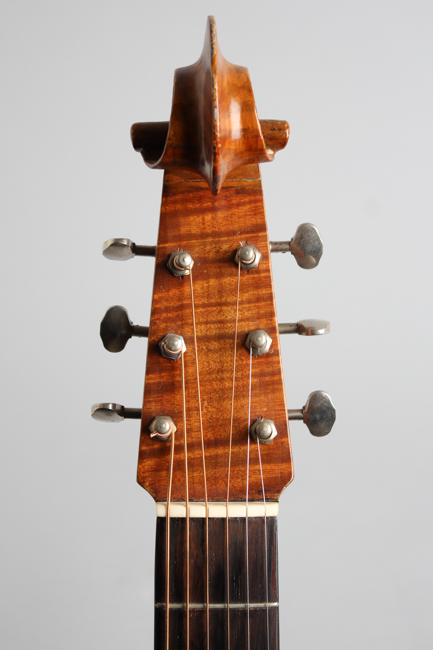 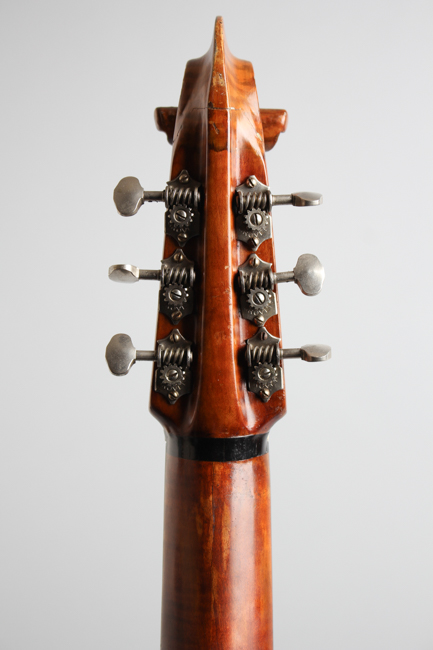 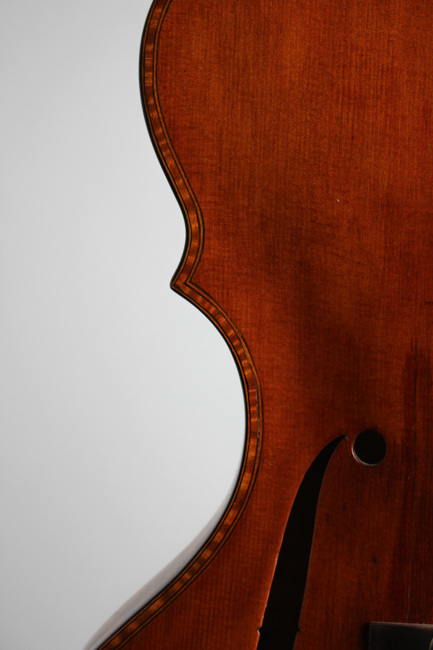 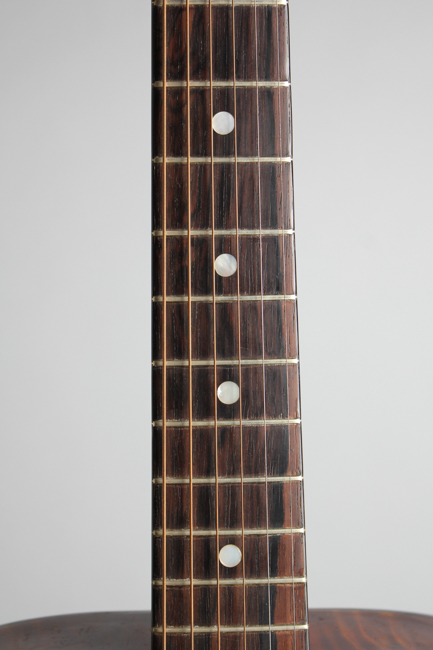 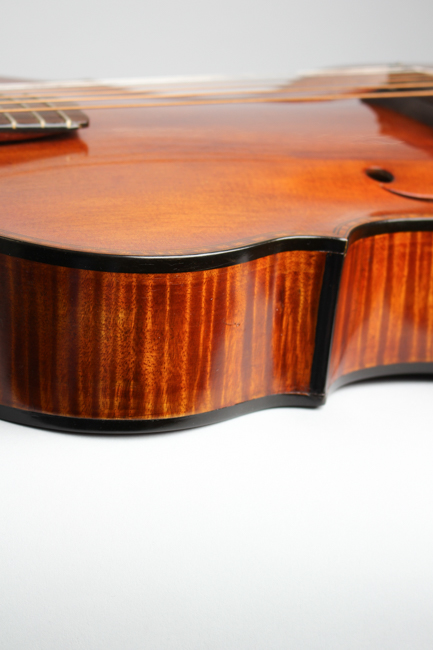 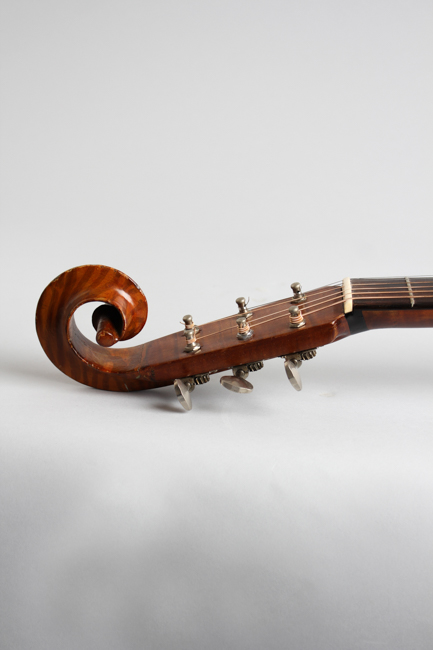 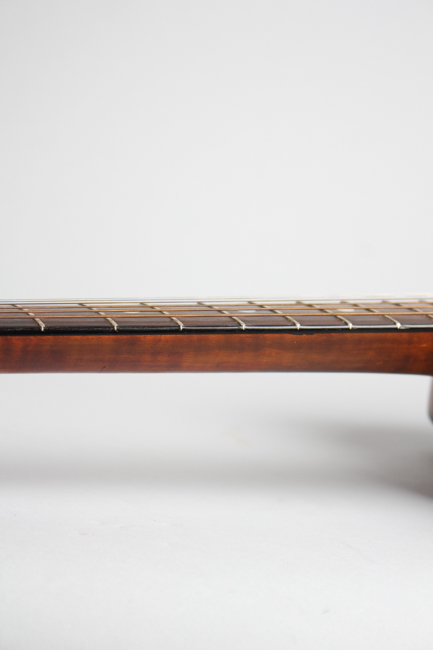 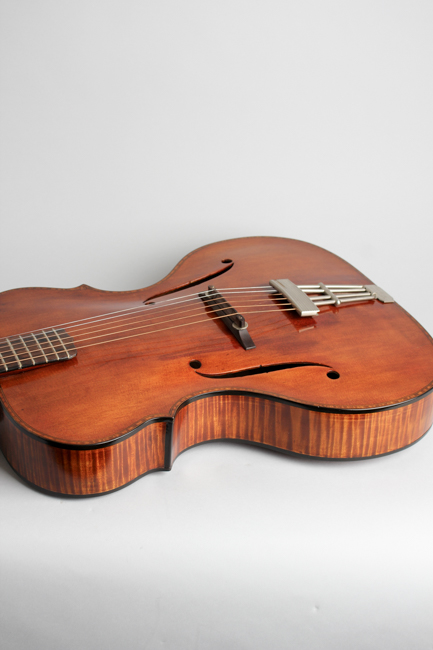 This is one of the most interesting and unusual American guitars ever created, and a true (if eccentric) classic of the arch-top era. Willi Wilkanowski was a well-known successful Brooklyn violin builder who beginning around 1937 began crafting a very limited number of unique and striking guitars. No paper or catalog references to Wilkanowski guitars have ever surfaced and they were almost certainly offered only for local sale in the New York area. While the guitar superficially resembles a small cello with a six-string neck, all the forms and design elements are unique. Only a handful of these guitars are known to exist, and no two appear exactly alike. This particular guitar is not labeled or dated but is very similar to other examples dated to 1938- this is the earliest known style of Wilkanowski guitar.

Wilkanowski was born in Poland in 1886, and was a full-fledged violin maker by the age of 17. After coming to the United States in the early 20th century he built violins for the Ditson Company of Boston and New York, and then for the Fred Gretsch Company in Brooklyn. A 1940 Gretsch Jobber Catalog offers Wilkanowski Artist Model violins priced from $50-$150 described as "his own personal work…no other hand touches them." While some sources claim Wilkanowski worked in Boston during the 1920's and early 1930's, he was listed as a violin maker and seller in Brooklyn in 1933, and anecdotal evidence suggests that the shop was at that location well before then. The 1942 book "KNOWN VIOLIN MAKERS" by John H. Fairfield estimates his production to that point as being 5000 violins and 100 violas, which would be prodigious for an individual or even a small workshop. At some point in the late 1930's, Wilkanowski became interested in the guitar either on his own or thru a customer request and from his violinmaker's perspective approached guitar design in a most unorthodox way.

Wilkanowski's guitars all seem to date from between 1937 and 1941. Some bear labels and some do not, sometimes crediting "Wilkanowski & son". Like this example, most of the guitars carry no apparent serial number. Even if his sons were involved in the guitar design, Wilkanowski's family did not continue instrument building after the father's death in 1954. It is possible that the guitar business was intended to be a separate entity perhaps run by his son or sons, but either it did not prosper or may have been discontinued due to the upheavals of the Second World War.

All Wilkanowski guitars are built to the same general shape and size, but variations include headstock shape, presence or absence of a logo, fingerboard inlay, top ornamentation, soundhole shape, types of tuners and hardware, and exact style and body width. Some later guitars carry the name "AIRWAY" and/or a stylized letter "W" on the headstock, which changes from the cast scroll sometime before 1940. Wilkanowski's guitars seem to go thru a rapid evolution of features in a short time, as is typical with completely handmade instruments, but whether these resulted from customer input or the builder's whims is unknown. The same published 1942 estimates list 30 guitars as having been made to that point, selling for $400 each, and no evidence suggests any were built after that. Whether Wilkanowski examined contemporary guitars from Gibson or his fellow New York builders Epiphone and D'Angelico is unknown, but he must have been aware of these types of archtop instruments and gotten some general ideas from them. Certainly the quoted price reflects that he felt his instruments were the equal of a Super 400 or D'Angelico New Yorker! It is also unknown as to whether he had any input into or was influenced by Gretch's Synchromatic line, which was being designed and launched around 1939. He obviously had extensive business dealings with Gretsch at the time.

This particular Wilkanowski guitar is both visually fabulous and a beautiful playing and sounding instrument. It features a grafted aluminum scroll painted in faux wood grain on the headstock which was used only on the very earliest guitars. The paint on this piece is carefully matched and blended into the curly maple headstock both front and back. Later Wilkanowskis carry a flattened oval headstock crown not unlike the familiar modern Ovation design. The headstock itself has a pronounced rounded spine on the back, with the tuners recessed into either side. The neck has a rounded "V" contour and feels chunkier than some other Wilkanowskis at the nut. The rosewood fingerboard is unbound with a bone nut and has large pearl dot inlays, with a gentle point at that body end.

The body is in the standard Wilkanowski pattern, with cello-like points where the upper bout slopes down towards the waist. The "F" holes are segmented somewhat like early Epiphones but otherwise violin styled. The top is very fine-grained spruce, the back has a very dramatic flamed pattern and both are very highly arched. Top and back are multibound in contrasting wood with a thick strip of highly flamed lighter wood in the center, shaped into a distinctive edge curve. Tailpiece and tuners are Grover products typical of New York made guitars of this era, the tailpiece is engraved "Grover Deluxe" and is very similar to a model often used by Gretsch.

In some ways this guitar has a very modern aesthetic, foretelling later developments in archtop guitar design. All bindings are wood, unlike virtually all other top line guitars of the era which were swathed in layers of plastic binding and pearl ornamentation. The instrument exudes a "classical" sort of style, with the beauty of the tonewoods allowed to be the primary attraction. While very unlike the Gibsons, Strombergs and D'Angelicos of the 1940's, this relative austerity prefigures the direction archtop guitar design has taken since the 1970's. Later Wilkanowskis have wooden tailpieces and even pickguards, further prefiguring much more recent designs. We are pleased to offer this guitar for sale from its original home of Brooklyn NY, where Wilkanowski built the instruments he is remembered for.