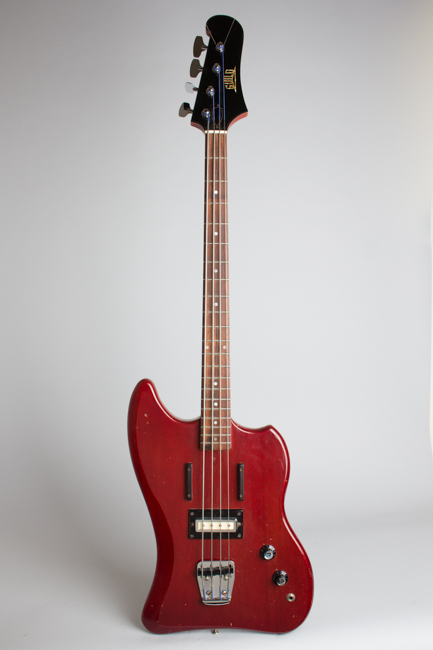 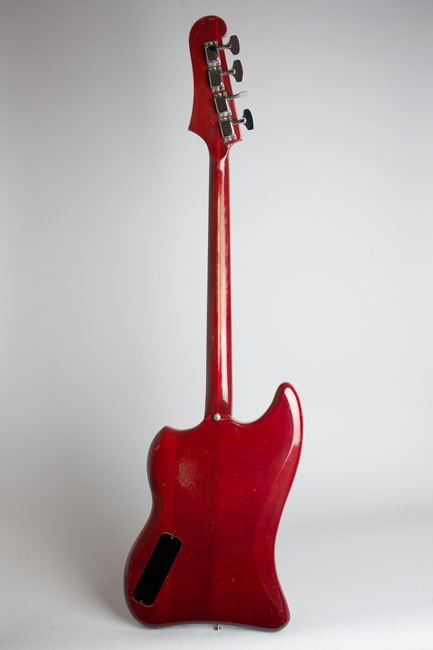 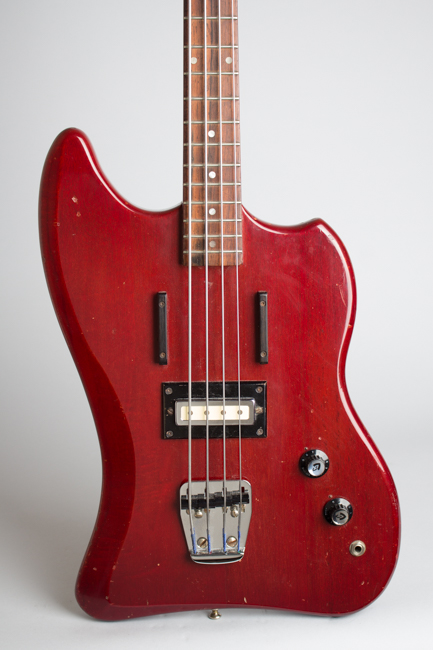 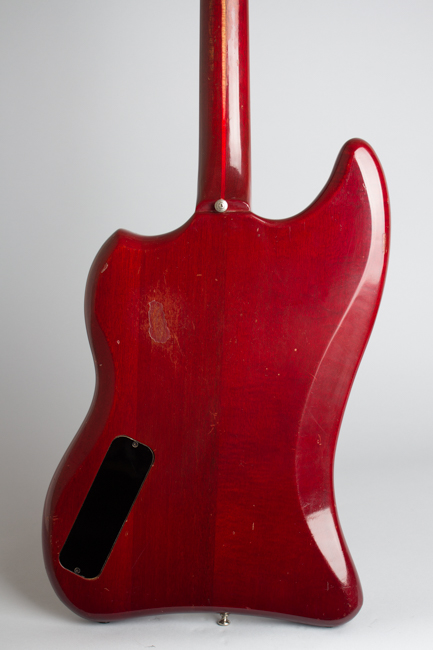 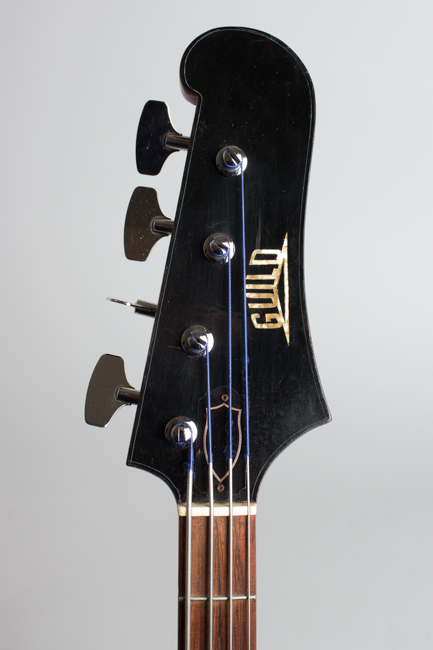 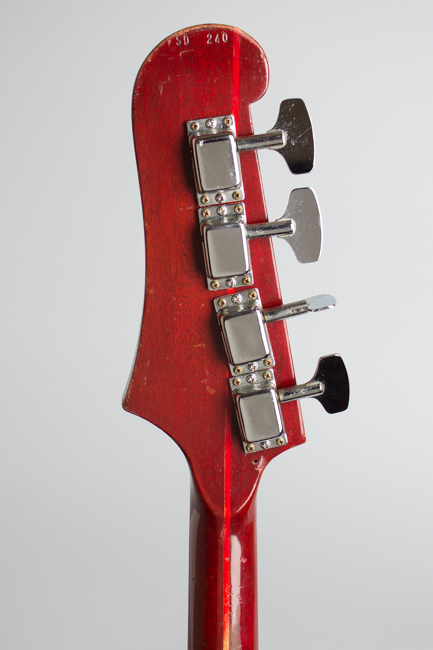 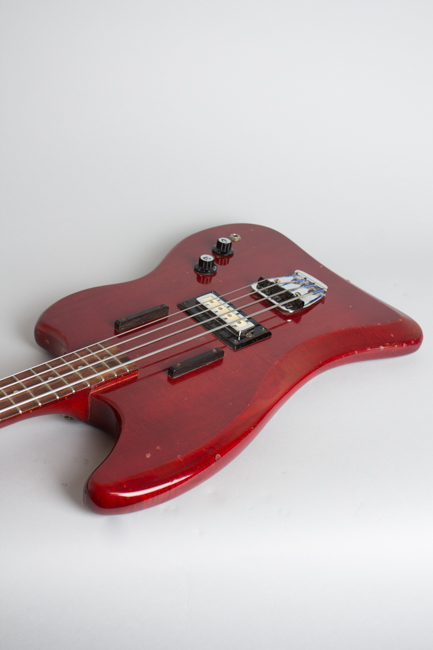 Guild was a late starter into the electric bass market but by the end of 1964 developed the semi-hollow Starfire Bass and the solid body Jet Star, which used the body of the S-200 Thunderbird guitar. The Starfire went on to become a classic but the Jet Star...not so much. This very rare bass was introduced around the end of 1964 (appearing in the October '64 pricelist at $245.00) but few if any shipped before 1965. This 1966 model is one of around 200 shipped that year the only year the model was produced in any sizable numbers.

The Jet Star's design is closest to Gibson's EB-0, although with a sleeker more balanced feel. The slim, asymmetrical body handles well but to most eyes looks somewhat ungainly. The two "feet" on the bottom edge were a vestige of the S-200 guitar's most questionable feature-the "Built-In Stand". Luckily someone at Guild had the good sense to omit this from the long-necked bass! An oddity shared with the S-200 was bodies built of different woods depending on finish; this cherry model is mahogany like most Gibsons while sunburst examples were alder. The face carries no pickguard at all, most unusual looking on a 1960's solidbody. Two prominent wooden finger-and-thumb rests are screwed above and below the strings, which terminate at a Hagstrom bridge/tailpiece unit with the early-style plastic saddles.

The Jet-Star's 30 1/2" scale neck is made of mahogany with a center maple lamination and is quite slim, like the Starfire. This bass has Japanese-made tuning keys mound to its long single-sided headstock which was a new addition to the model around the beginning of 1966. Besides the slim neck a big difference from the Gibson EB’s was the pickup placement-the single coil unit was mounted in a bridge/mid-body position, which gives the Jet-Star a much tighter, more aggressive sound than many period basses. Although introduced equipped with the now-vaunted Bi-Sonic pickup, 1966 models like this one carry the small chrome and plastic covered "Mickey Mouse" PU, dropped into a larger rout covered with an oversize mounting plate.

The bass saw few users in the 1960's but a Jet Star of this style in sunburst had brief moments of glory in the hands of the Monkees. Peter Tork used a it during one multi-song lip-synch session in the second season, where it was also "played" by Davy Jones. The group's 1968 feature HEAD has just one true live performance, with Tork's Jet Star front and center on a killer version of Mike Nesmith's "Circle Sky". Former New York Doll Arthur Kane often played a Jet-Star in his post-Dolls combo The Corpse Grinders. "That was Artie's favorite bass" band co-founder Rick Rivets once proclaimed. This is the first Jet-Star we have had for sale and it is a comfortable playing, great sounding bass that is as unique and unmistakable as it gets!

Overall length is 45 in. (114.3 cm.), 13 in. (33 cm.) wide at lower bout, and 1 1/2 in. (3.8 cm.) in depth, measured at side of rim. Scale length is 30 1/2 in. (775 mm.). Width of nut is 1 1/2 in. (38 mm.). This bass is all original with no damage but shows some general wear. There are small finish dings and chips overall but no checking or fade-the cherry color is still very strong. The only larger areas of loss to the lacquer are a spot on the back of the body on the lower horn down to the wood and the back of the neck is also worn down along the center spine. There is a small screwhole in the back of the headstock where someone once mounted the strap button in the "Hootenanny" position long ago! All hardware and fittings are original, the frets show very little wear and the bass plays and sounds excellent. Included is the insanely rare original fitted heavy vinyl gig bag, with a Guild logo tag. This is still in good useable shape, the zipper is not broken (as most are!) but there is a repair to the handle. Still it's kind of amazing it survived...we have never seen another one of these! Excellent - Condition.
×