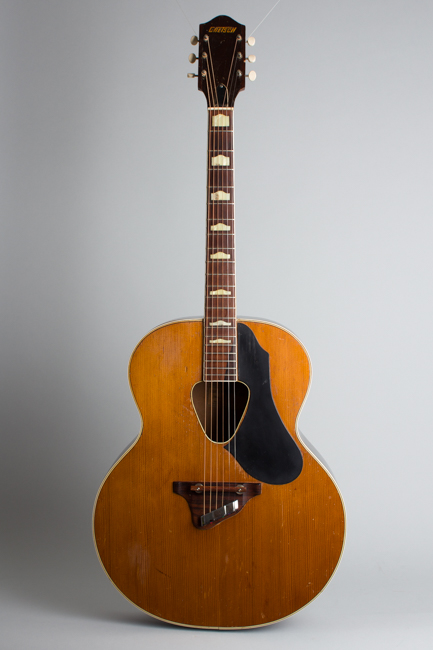 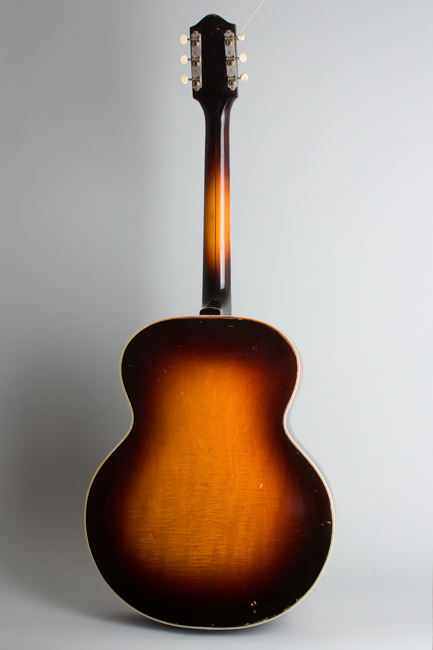 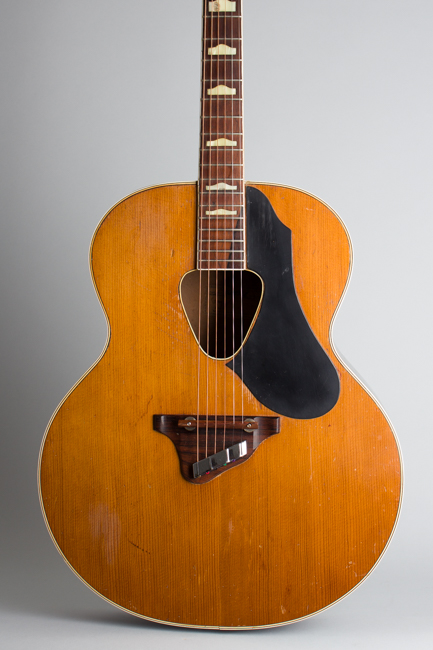 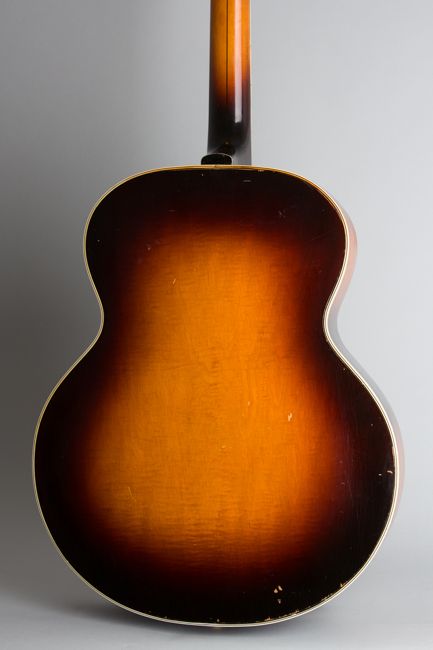 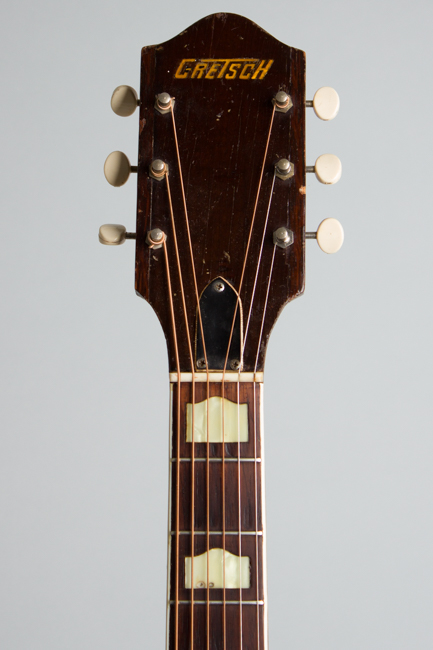 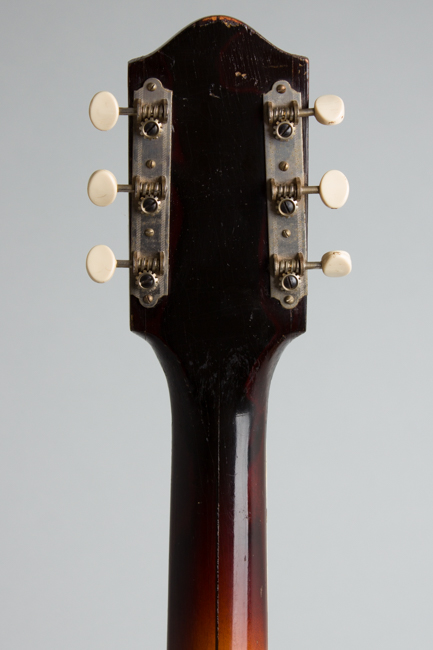 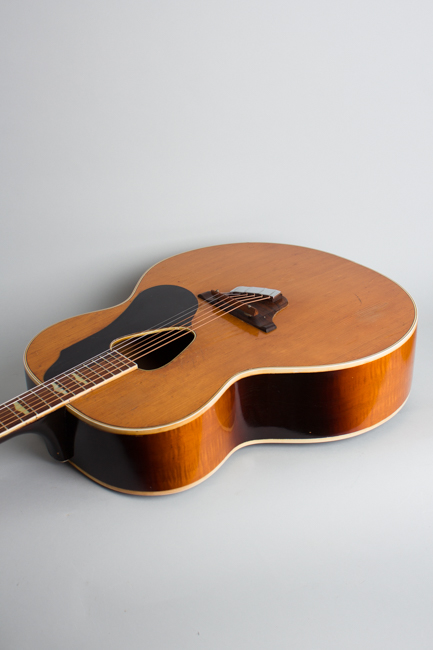 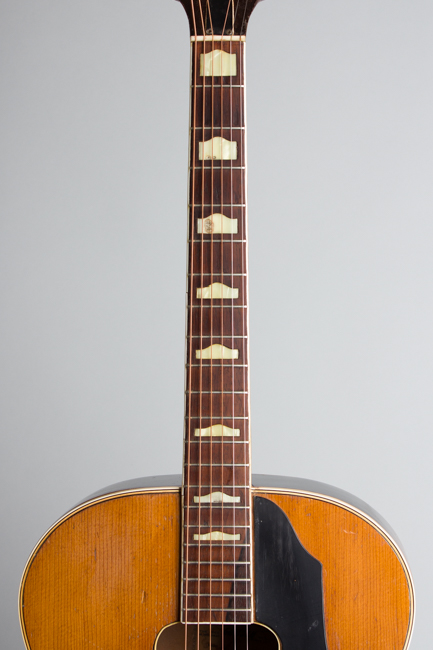 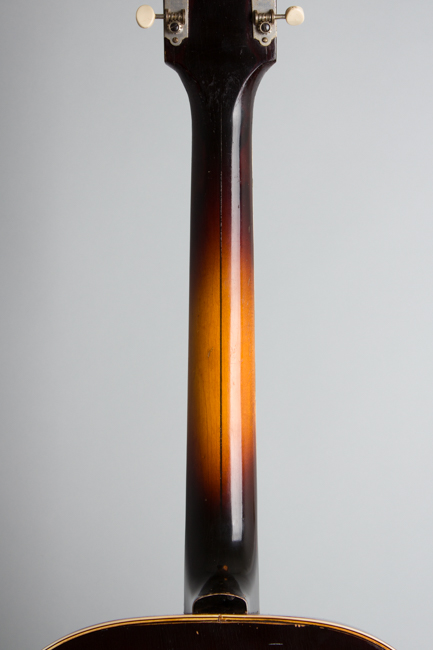 This large jumbo flat top Model 6021 was one of the more unusual Gretsch designs of the 1940s and '50s, a fairly unique creation if not something the company is particularly remembered for. The first iteration was introduced just before WWII as the Synchromatic Model 125, with versions produced up into the late 1950s in limited numbers. By the time this one was made in 1956 it was listed as the model 6021 Town & Country, presumably indicating its intended suitability for both urban and rural musical stylings! Starting in 1954 Gretsch produced a flashy Western-styled version of the model as the 6022 Rancher, and that guitar is far better remembered as a Gretsch classic, although structurally the two are the same.

This 6021 was built in 1956, in the first batch with the distinctive hump block fretboard inlay that became a Gretsch trademark. The arched back and sides are laminated maple, the top is spruce. The 3-piece maple neck is fairly slim with a bound rosewood fingerboard. The natural-finish top and sunburst back are four-ply bound, with a double-bound soundhole rim. That vaguely triangular soundhole and large adjustable bridge are the most distinctive features, both shared with the better known Rancher. The headstock is oddly plain, with just an inlaid Gretsch T-roof logo and the small "bullet" truss rod cover.

1956 was the last year this model was listed, although stragglers may have been finished out and sold through the end of the decade. The 6021 is not a subtle guitar; it is big and fairly heavily built, responding best to a vigorous strum! These were intended for rhythm instruments in combos (urban or rural, apparently!) and do work well in that role. This is certainly a striking instrument visually, and sonically while it will not convert anyone attached to their '50's Martin it does offer a fairly powerful midrangey rhythm kick and would also record well in this role. Gretsch expert Ed Ball estimates no more than 350 of these were made, so they are fairly rare.

This rare Gretsch flat top is a bit scruffy overall, showing general wear but it remains a good playing instrument, at least as far as these go! The finish has dings, dents and scrapes overall and some worn-away areas on the top. The pickguard was replaced long ago, as was the rosewood bridge saddle but all else appears original. Some of the binding on the fingerboard has been reglued but there is NO binding rot on the instrument. The bridge is not lifting, which is another common issue with these.

The back center laminate seam of the neck has been resealed, with minimal touch up. The neck has been reset and the truss rod replaced with one that actually works; the early Gretsch rods can be hit or miss. The original frets are still in good shape and the instrument plays well with a fairly low action, easily adjustable in either direction. This Brooklyn-made jumbo flat top is one of Gretsch's more eccentric creations, not everyone's idea of a great acoustic flat top but with a cool factor that spans the 6+ decades since its creation. Very Good + Condition.
×