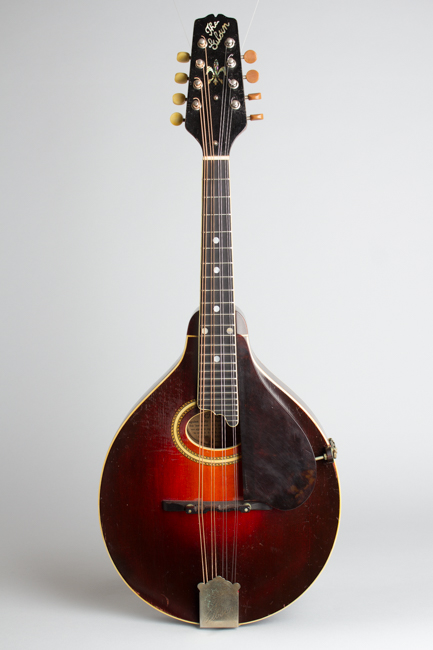 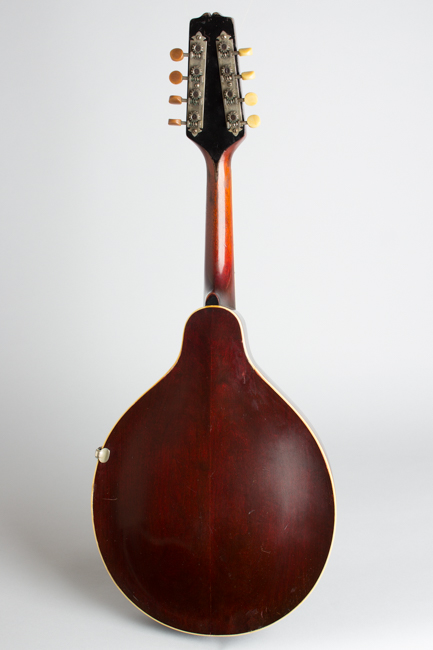 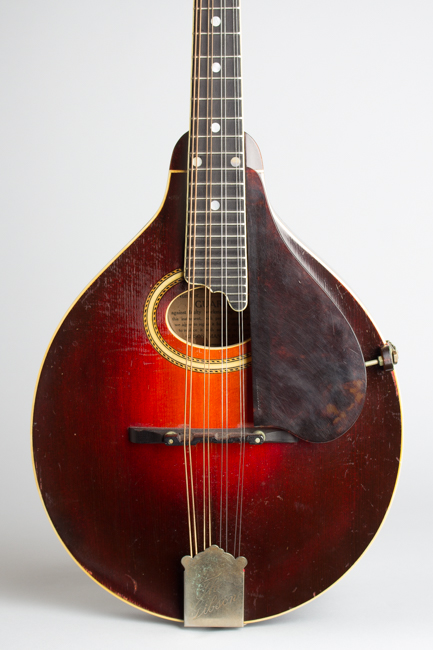 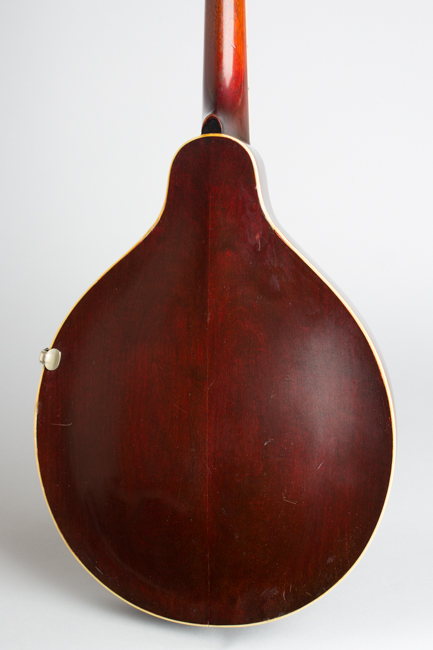 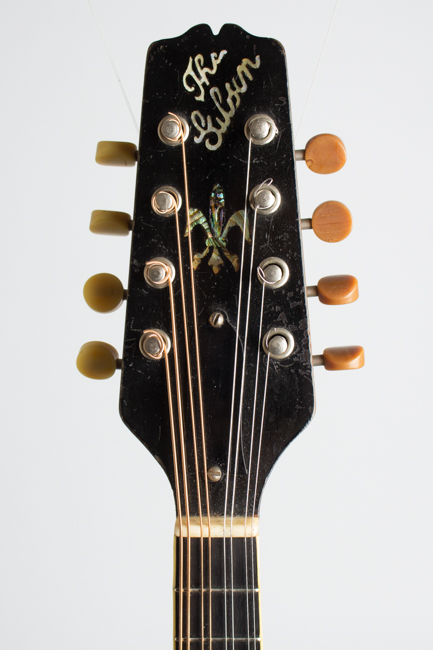 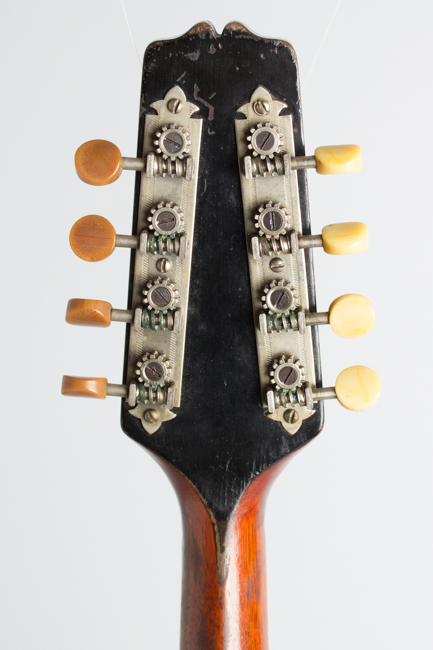 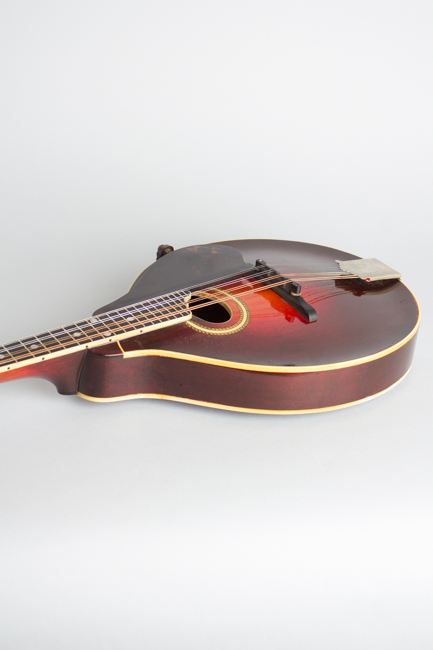 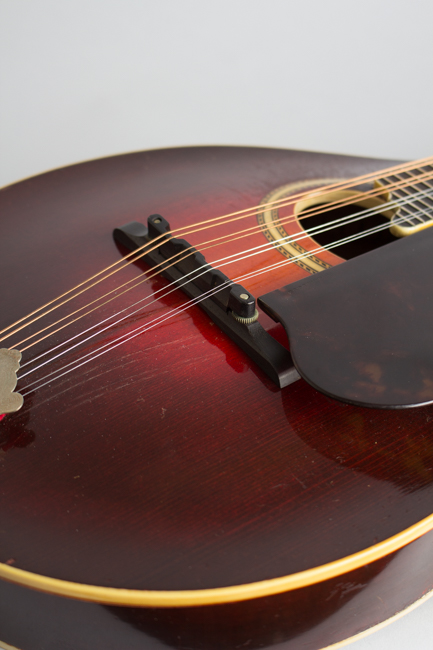 If there is a holy grail of Gibson "A"-style mandolins, this is one: a 1924 A-4 from the height of the Lloyd Loar era, equipped with a Virzi tone projector. This is one of the nicest-sounding "A" mandolins we have had and a great example of Gibson's craftsmanship at the apex of the mandolin era, just before the company's focus shifted to banjos and then guitars.

These "Snakehead" instruments are revered for their unmatched tone and projection and have all the most advanced features of the period including the adjustable truss rod, raised adjustable bridge, and slim neck profile. The A-4 was Gibson's highest grade mandolin in the symmetrical-bodied "A" series and only the elaborately scrolled F-2, F-4, and F-5 were priced above it.

Lloyd Loar's tenure as "acoustic engineer" at Gibson has become so mythical that sometimes separating fact from fiction is difficult. Certainly the mandolin family instruments made during the period of Loar's employment are the most perfectly realized in Gibson's history, and have become the template for most similar instruments since.

The mandolins of the "Loar Era" show the influence of a master player on both design and execution, although other Gibson employees (especially Thaddeus McHugh and Lewis A. Williams) actually engineered many of the technical improvements of the early 1920s. Loar was primarily concerned with "voicing" the instruments properly; the Master Model Style 5 line was his greatest contribution with their violin-style f-hole tops, but all of the Gibson mandolin family instruments were refined and improved at the same time.

This A-4 dates to 1924, the last year of Loar's employment. It features another peculiarity of the era, the Virzi Tone Producer mounted under the top. This device, produced by the Virzi Bros. violin company in New York, was championed by Loar but was an optional (and extra cost) feature at the time. The Virzi was more commonly seen in the more expensive Gibson instruments, especially Master Models, and it is uncommon to find one in an "A"-style mandolin.

The Virzi itself is a small spruce disk suspended beneath the top intended to add extra harmonic partials to the instrument's sound; because it was named the "Tone Producer," many players have been disappointed to discover that it does not actually add more volume to the instrument. What it does do is help produce a more complex sound with richer overtones...that is the theory, anyway! Many Virzis have been removed from 1920's Gibsons by players who wanted a louder more driving tone, but those that remain are a fascinating part of the Loar era story.

This A-4 is a lovely instrument to behold. The sunburst top finish maintains beautiful color and even the fleur-de-lis inlaid in the peghead is made of unusually fine figured green abalone. The neck is a very slim rounded "V" profile and extremely fast and comfortable. This rates as a very fine-sounding and playing mandolin by any standards, with the combination of power and complexity heard only in the finest Gibsons.

Overall a fairly clean and very original mandolin; there are some dings and scrapes overall and some light pickwear, but much of the finish is still quite clean. The back/side seams have been resealed at several points along the rim, and there are some visible but well-executed touch up spots around the edge. There is also a small rim repair to the bass side near the neckblock; very well done, but visible on close inspection. All hardware is original; this is a very attractive, easy-playing mandolin with a great sound, sweeter than many A-4s, likely due to the Virzi. Includes a nice OHSC. Excellent - Condition.
×