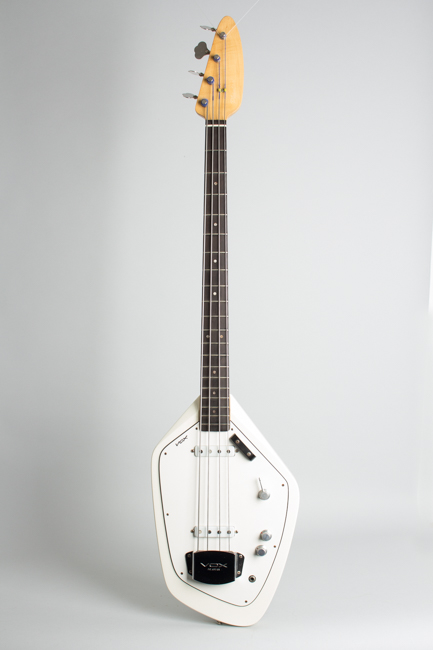 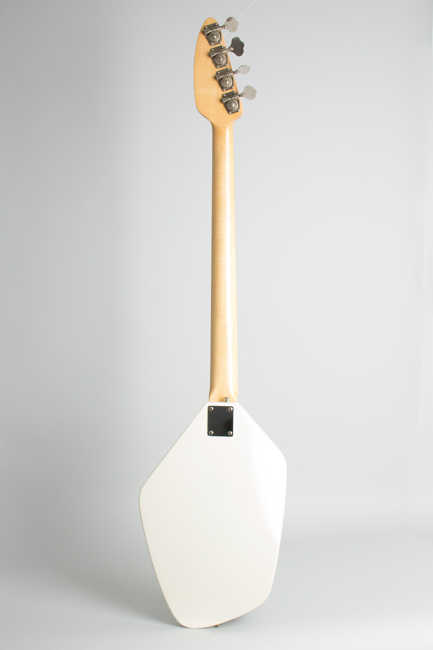 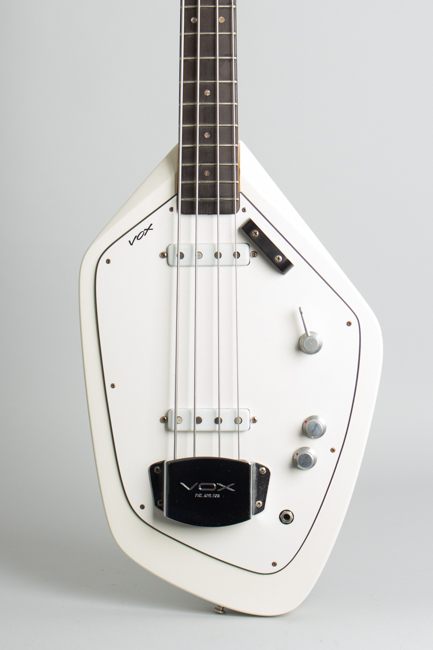 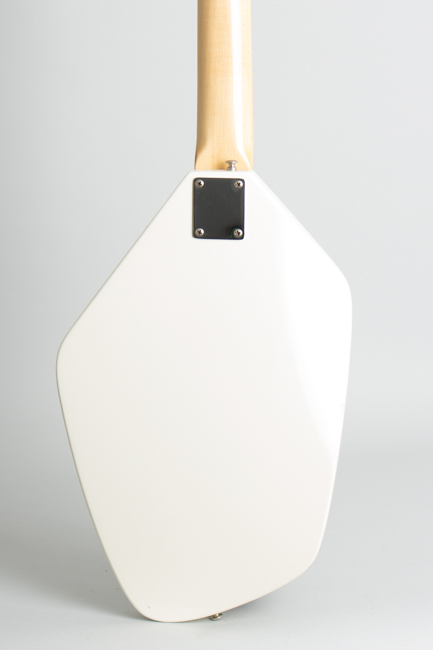 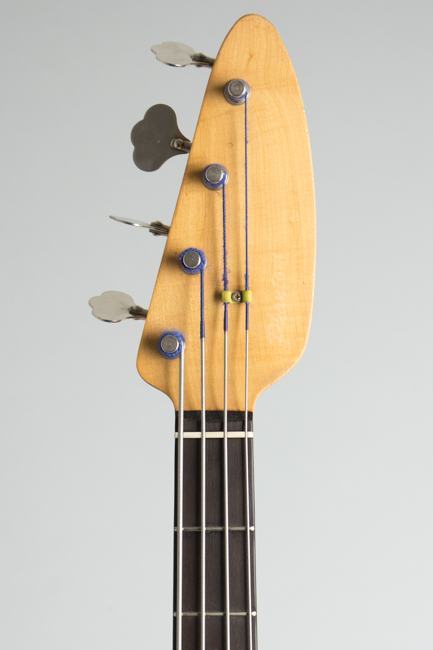 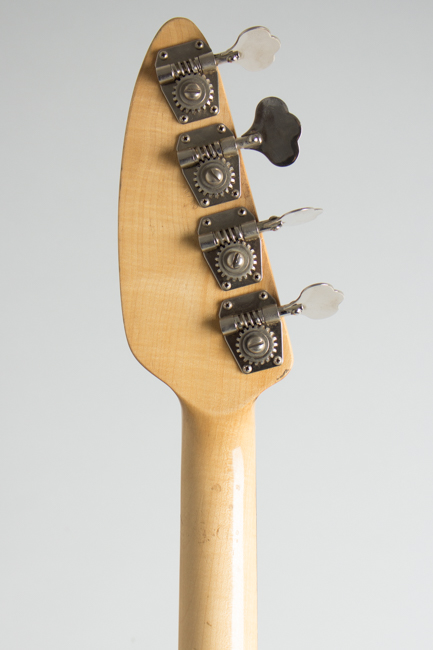 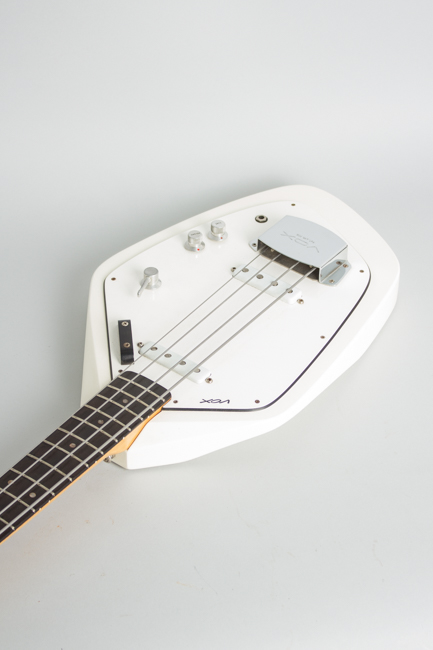 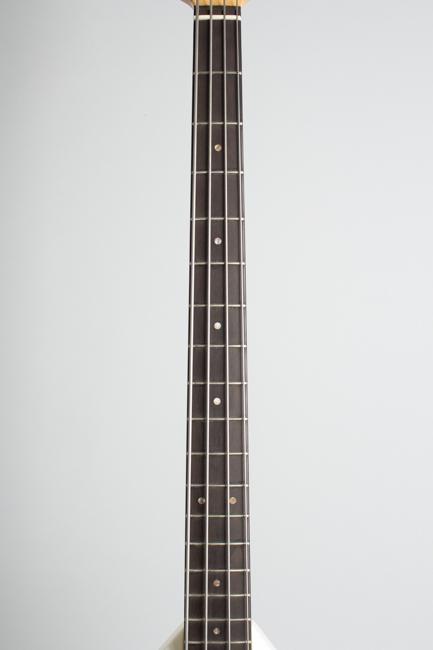 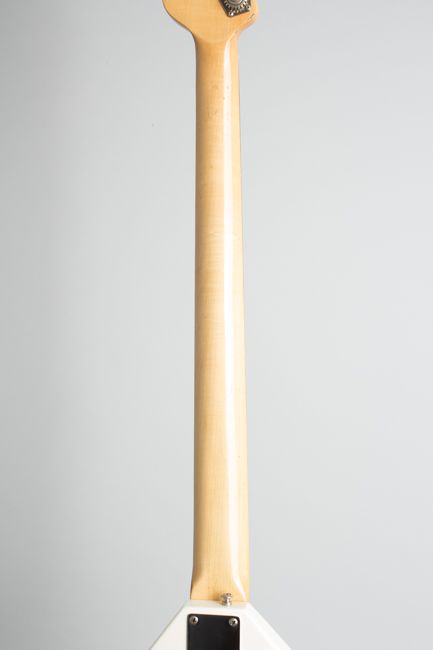 The Vox Phantom remains one of the 1960s' most iconic instruments, at least in design and visual impact -- utterly distinctive then and now. Along with the equally striking teardrop-shaped Mark series, the abstract trapezoidal-shaped Phantoms were born at JMI in Dartford, Kent in the early '60s. The Phantom IV bass, introduced in 1962-3, is one of Vox's most imposing instruments.

Unlike the short-scale, thin-necked layout of most of the company's basses, these are built with a full 34" scale on a big wide neck closely based on the Fender Precision. The two 4-pole pickups provide a wide range of tonal options; in design they are most similar to the original 1952 Precision units, though fitted with a more Strat-like white plastic cover. The bridge is also closely modeled on Fender, as are the Kluson-style tuners. Controls are a master volume and tone and a large lever switch for pickup selection.

This Phantom IV dates to mid-1965 and is a superbly well-preserved example. Unlike nearly all production Vox guitars originally sold in the US, this original JMI-made example was actually assembled at the Vox factory in Dartford, Kent. That facility was overstretched even in 1964 supplying Vox product to the UK and world markets; instead of expanding their guitar-making facilities JMI outsourced the bulk of instrument production to EKO's facility in Recanati, Italy. This Phantom features a maple neck with an ebony fretboard made by UK furniture maker G-Plan, JMI's most consistent supplier, who built the bulk of the better quality components for Vox guitars.

Eko-made Vox guitars are exponentially more common and lack the cachet -- and the sound -- of original JMI-built instruments. When Thomas Organ in California took over US distribution of JMI's products, nearly all the Vox guitars they handled would be of Italian parentage so an original UK-made instrument like this is extremely rare here in America.

There are not a lot of 1960s basses that provide this combination of practical playability and wicked cool looks as the Phantom IV -- this model is a garage rock classic as used in the 1960s by "Fang" Volk of Paul Revere and the Raiders (whose personal bass was practically identical to this one) and in the 1980s by Michael Jay of the Fuzztones, among others!

Overall this bass remains in extremely fine condition, with an all original finish and unmolested hardware down to the last screw. The original white Polyester finish on the body is spectacularly well-preserved with none of the typical checking than is often seen on Vox instruments, and only a few small edge dings. There are also some small chips and dings in the thin lacquer finish on the neck, the most noticeable just behind the first fret and on the edges of the headstock. Other than these individual spots this is an incredibly clean-looking bass for its age. The only oddity is that the headstock "Phantom" logo (which was a thin plastic applique) has gone missing, leaving only a "ghost" outline of its presence -- fairly poetic in an odd way!

The large face-covering pickguard is made of hard signmaker's plastic and shows none of the typical shrinkage and broken-off corners commonly encountered on Italian-made Phantoms. The bass has just been refretted with slightly larger wire than UK JMI standard, and as a result is far more playable than most of these, proper fretwork being something JMI never really mastered. There are no other repairs, and this bass has a nice straight and solid neck; not always the case with English-made Vox instruments. This striking white Phantom is a spectacular looker, a finer player than many, and the best-preserved UK-made Phantom we have ever seen. Excellent + Condition.
×