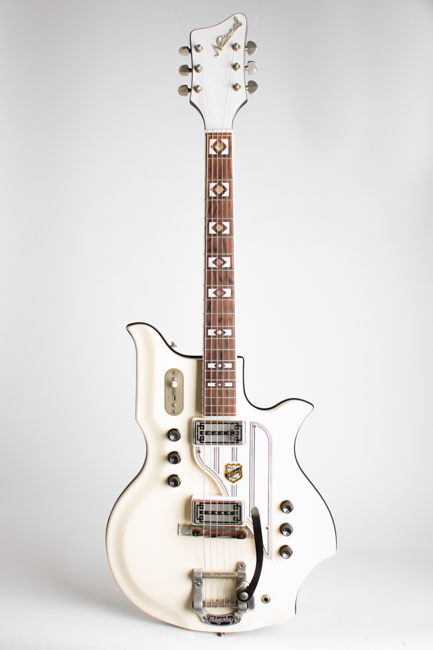 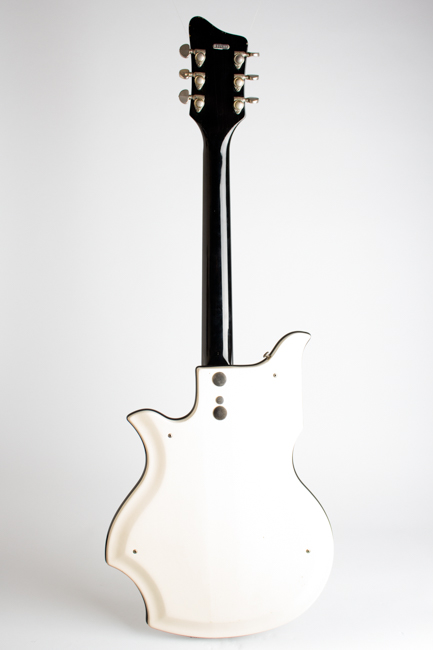 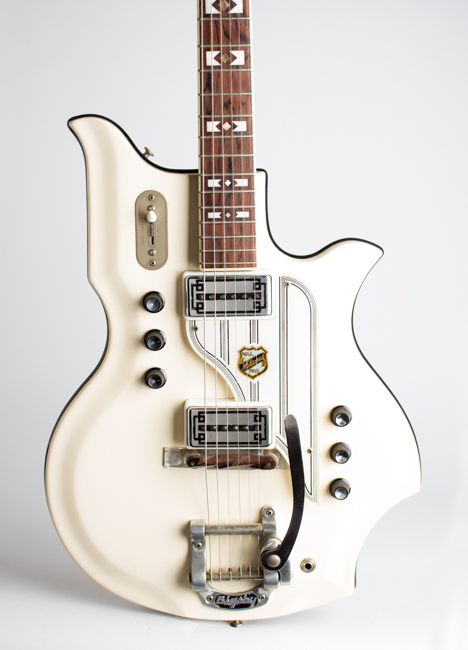 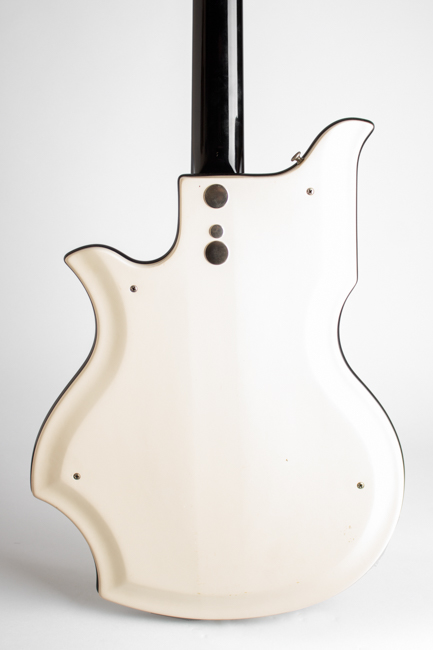 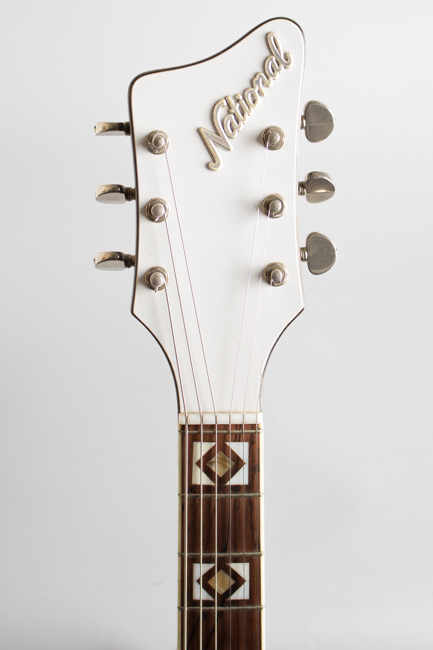 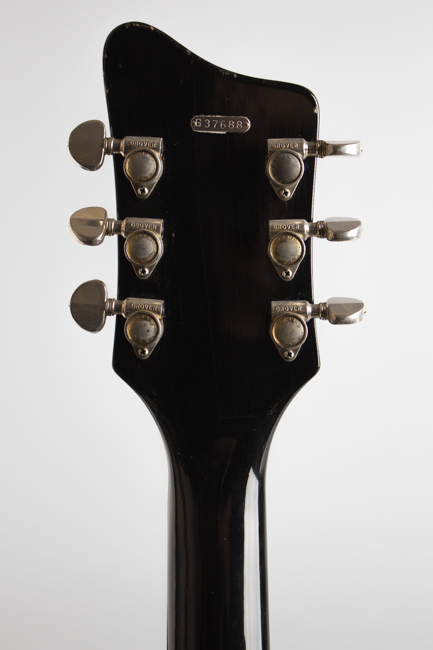 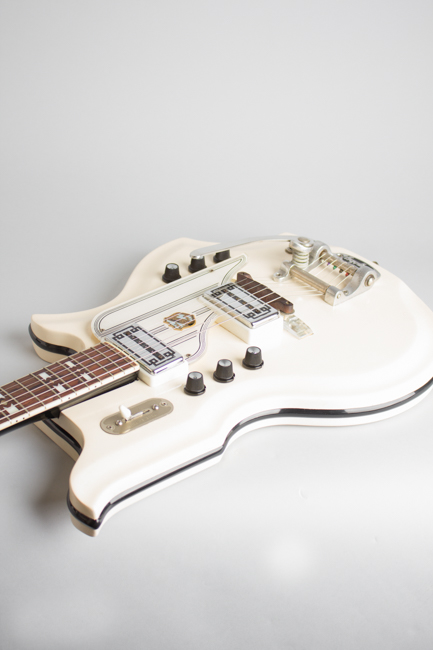 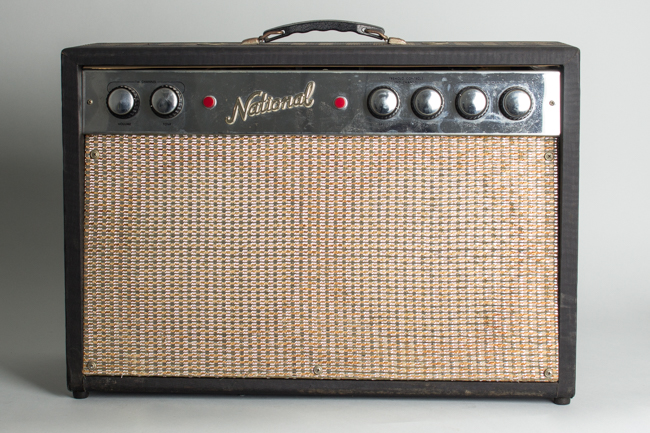 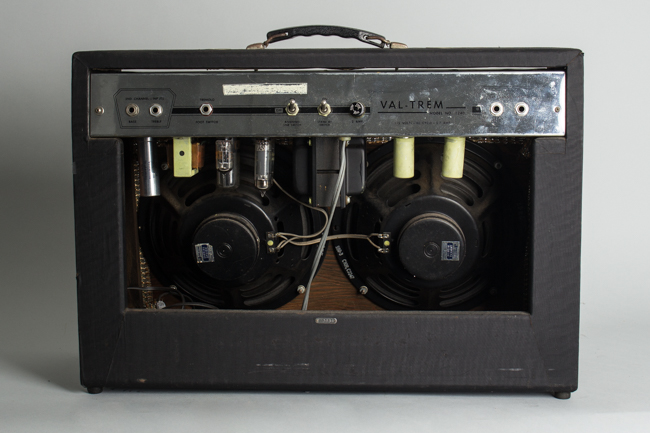 The still-dazzling National Res-O-Glas guitars of the 1960s remain some of the most exuberant examples of vintage American electric guitar design, an utterly unique concept even 50 years on. With a molded fiberglass body, aluminum-cored neck, and electro-acoustic "Silversound" pickup built into the bridge they certainly did not lack for innovative features, even at the peak of electric guitar design. This guitar comes with a period National Val-Trem Model #1240 amplifier; these two pieces were repeatedly pictured together as a set in the company's advertising at the time.

In the end, the line was perhaps more overtly stylish than entirely practical, however, and after a production span of only about three years emerged more as collector than player favorites. While they do have the cachet of funky blues/trash culture connotation today, these Nationals were actually quite expensive when new, and were marketed as top professional instruments.

The Glenwood 98 was the next-to-top-of-the-line guitar in this series, with a striking white finish on the sculpted "map" shaped body, fancy split-diamond and block fret markers, stock Grover Rotomatic tuners, and the now classic but then-new Bigsby "horseshoe" vibrato unit. The striking look is enhanced by a clear back-painted pinstriped plastic pickguard with a "NATIONAL Val-Pro" shield logo, and the black edge grommet around the sides at the joint of the two-piece body. The look echoes American hotrod culture of the period and manages to seem sophisticated and downhome at the same time!

The most useful feature of this guitar is the provision of a full three pickup array -- two of the excellent familiar Valco magnetic units and the aforementioned internal bridge unit. Many of the less expensive Res-O-Glas instruments lack the magnetic pickup at the bridge and thus are much less versatile instruments. Each pickup has its own tone and volume controls mounted in echelon above and below the string line, with a three-way selector on the upper bout. The sound of the magnetic units is quite powerful with the typical National/Supro raunchy, while the "Silversound" bridge pickup offers a very different tonality. This is a transitional example with the Bigsby but no master volume knob, added in 1964.

The Glenwood 98 represents the highest grade of the of these striking Nationals, topped only by the very similar Model 99 with gold-plated hardware and a aqua green top finish. This guitar is considerably more upscale than most of the similar but far more common period National and Supro models, and remains famous as a "Dylan" guitar, which Bob appeared with in a celebrated ROLLING STONE photo shoot in the '70s and on some Rolling Thunder gigs. Iconic in its own way; a very cool and rather uncommon 1960s guitar. Always an epic attention-getter and utterly distinctive despite more recent imitations!

This guitar is very clean and all original, with only some very light wear -- even to the stenciled pickup covers. The neck is about as straight as these ever get, and this is actually quite a playable guitar (a claim not all 1960s Valco products can muster!) with a great chunky sound. While generally considered primarily a collector's guitar, the Glenwood 98 is absolutely one of the coolest of all 1960s six-string creations, for show or go! Includes the even rarer shaped original case, which appears to have had a coat of darker wash added to the outside. The National Val-Trem amp appears all original and is very clean except for some residue from an old Letraset sticker on the upper pack panel. These two pieces make a great set to play OR display, a real live recreation of National's main ad theme through the early 1960's. Excellent - Condition.
×