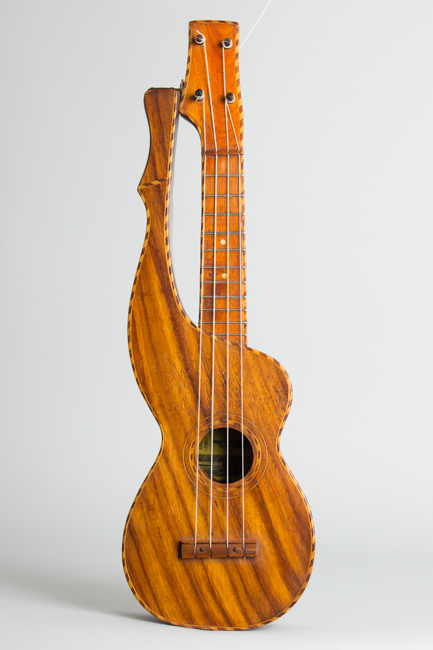 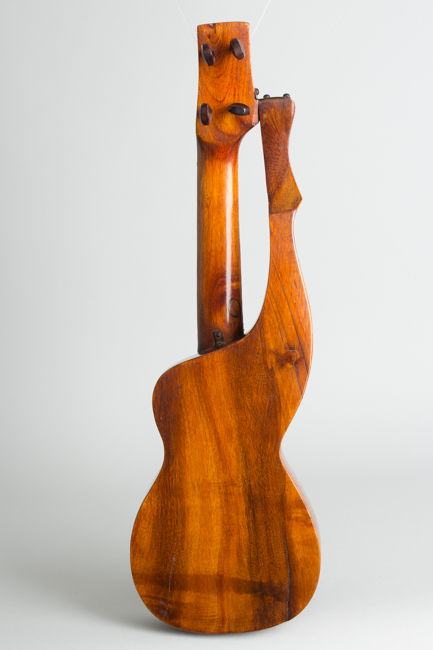 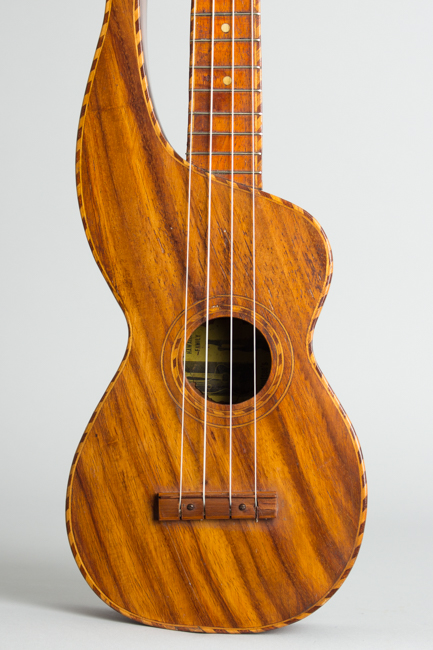 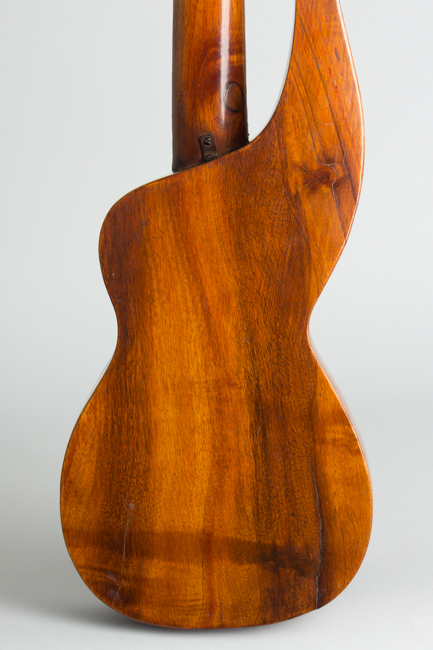 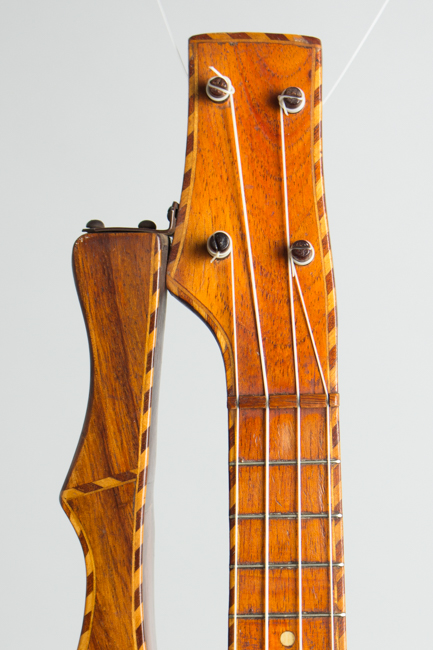 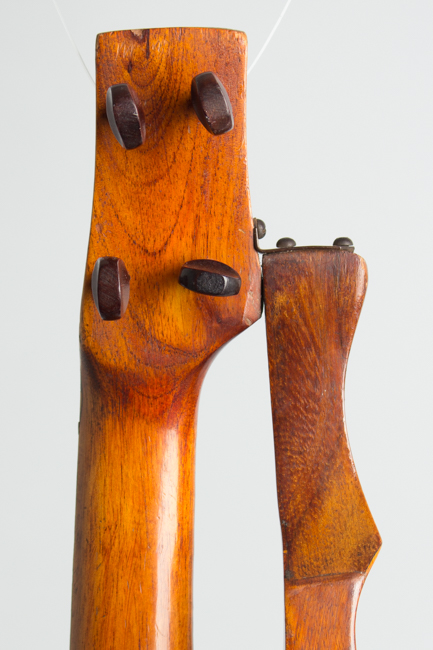 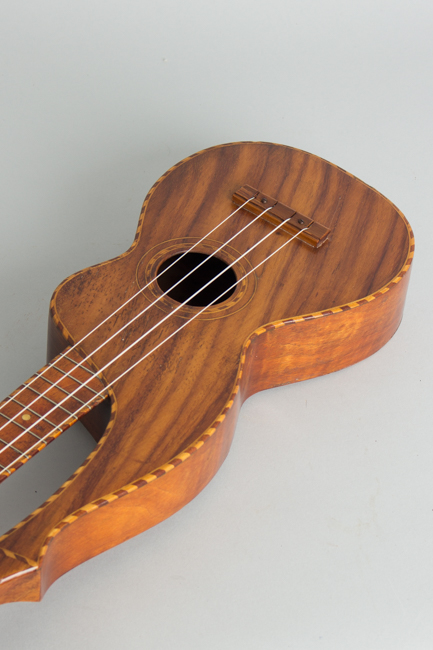 One of America's most creative (if least celebrated) early 20th century luthiers was Chris Knutsen, who hand-built his always amazingly eccentric instruments on the West Coast from the 1890s up into the 1920s. His original design for a hollow-neck Hawaiian guitar was popularized by Hermann Weissenborn and his Symphony harp guitars by the Larson Brothers (under the Dyer label), but Knutsen himself never made the leap from craftsman to larger manufacturer. He tinkered endlessly with his unique and highly original stringed instrument concepts, and each completely handmade instrument is distinctive, often appearing to be built from found woods and whatever hardware was available.

This unusual and very rare "Harp Ukulele" dates to around 1919, after Knutsen's fascination with harp guitars and similar instruments had waned and he had wholeheartedly embraced the very popular Hawaiian music trend. As a Hawaiian-style instrument, this ukulele is built of genuine native koa wood which was not too hard to procure in Los Angeles. Knutsen built a series of similarly laid out designs labeled "The New Hawaiian Family," and this uke is the smallest example of this clan. A paper label in the soundhole shows a Harp guitar and Ukulele as examples. There are period photographs of actual authentic Hawaiian musicians performing with similar Knutsen instruments.

The design is admittedly eccentric, but the instrument itself is well laid out and a nice example of Knutsen's work. The lines are fluid; the headstock and harp extension to the body are both asymmetrically shaped with a liquid sculpture look. The otherwise fairly conventional body has typical signature Knutsen hollow upper body extension with a long sweeping curve from the tip down to the waist. The top has a dramatic koa grain run diagonally for a vary dramatic look. The bridge is a standard one-piece ukulele type, its attachment re-inforced at construction with two screws through the top. The top, fingerboard and headstock are all bound in Hawaiian-style "zipper" wood marquetry. The sound hole has multiple wooden rings with the largest being similar wood inlay.

The fingerboard is inlaid with two small dots and ends in an angled point right at the rim. The neck profile is typically flat in the Hawaiian style with a nut width of 1 1/2". The tuners are rather roughly carved violin style wood pegs, but quite functional. There is a metal bracket joining the headstock to the body extension secured with wood screws, and the neck has a bracket at the heel as well theoretically allowing a slight amount of neck angle adjustment.

The internal workmanship is not to say, Martin standards but cleaner and better executed than some of this maker's surviving creations. Despite 100 years of tension, the instrument remains quite solid. While obviously an eccentric instrument, this is a good-playing and excellent-sounding piece of American musical art, a rare and striking Knutsen creation. The sound is quite good, with a deeper, sweeter tone than many ukuleles.

Considering its age and relative fragility, this unusual Knutsen creation remains in nice original condition, not showing too much wear overall. The probably unseasoned koa has had a number of cracks over the years, more notably to the back than the top. There is a patched-in area on the lower rim that is solidly done but quite visible. There is corrosion to the metal headstock bracket, but overall the finish is in good shape with some strumwear into but not through the finish on the top. Overall a very nice and quite playable example of one of the more eccentric ukuleles of its era and a very good-sounding (if wildly unconventional) piece of history. Very Good + Condition.
×