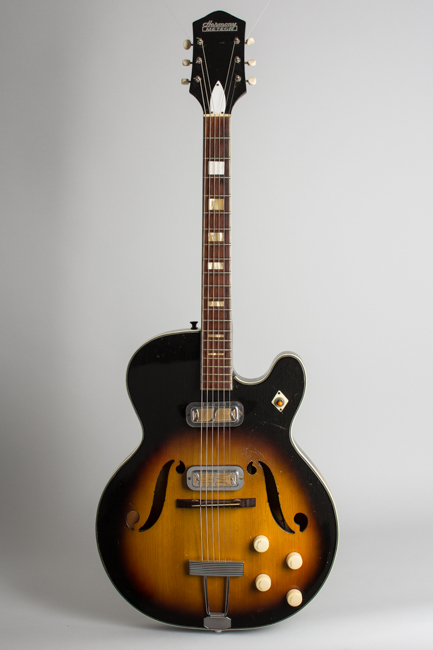 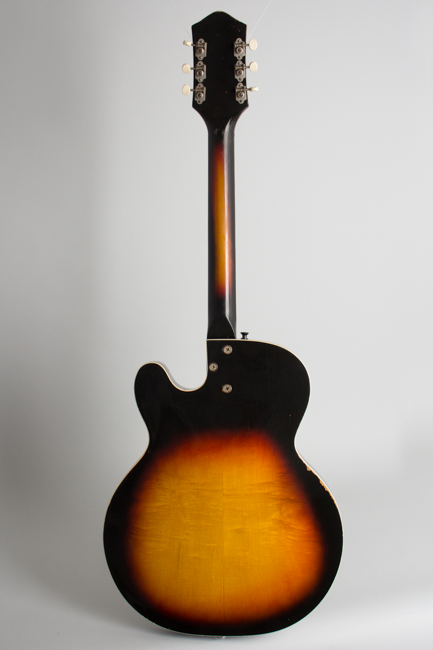 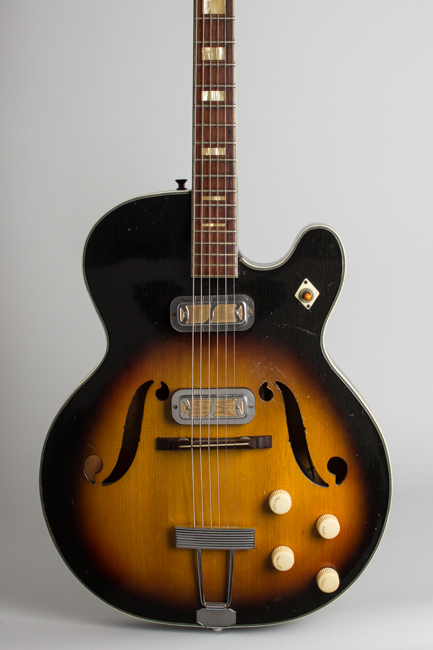 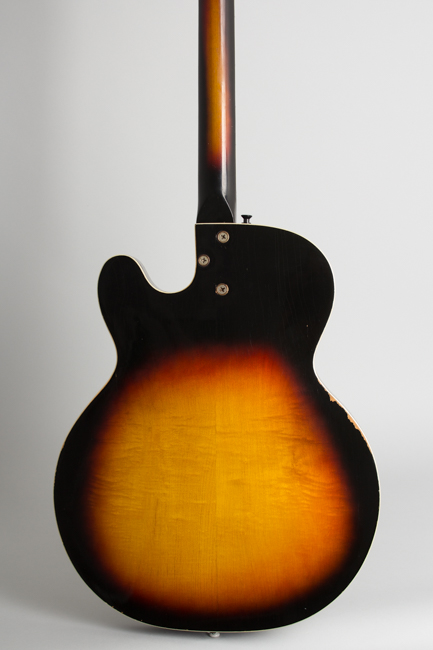 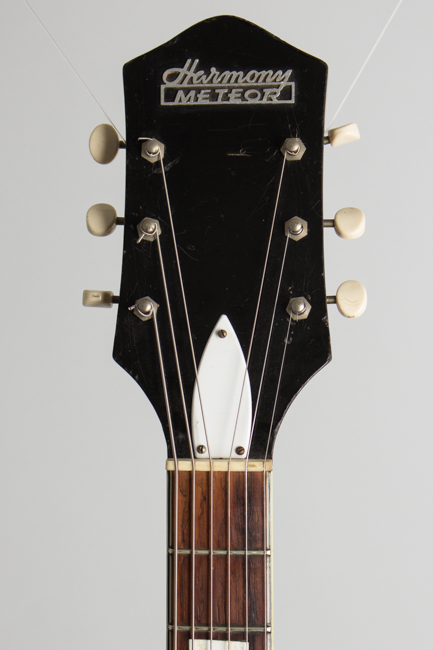 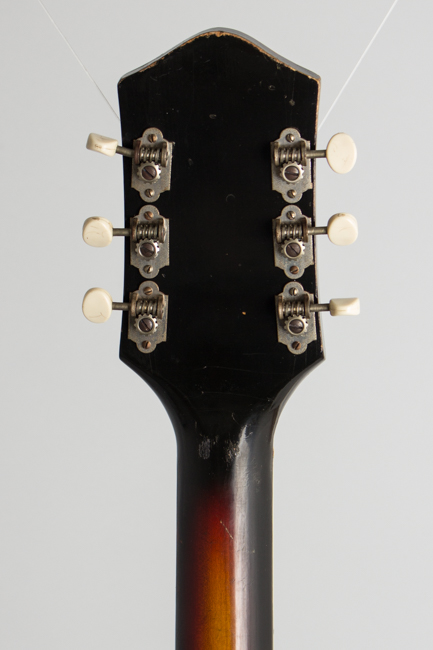 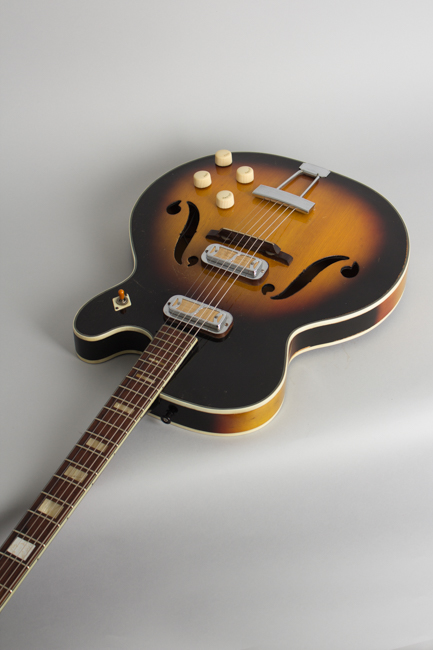 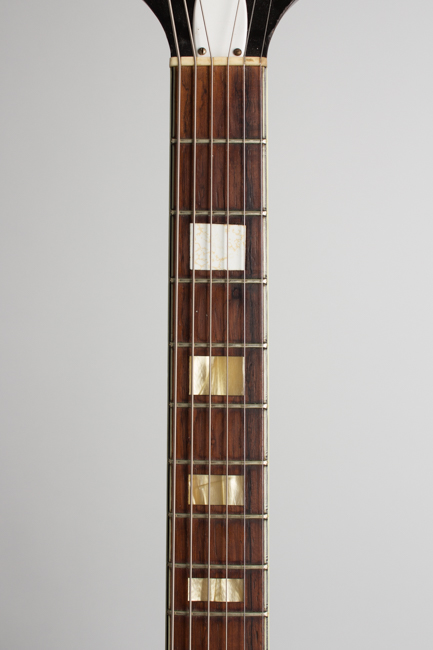 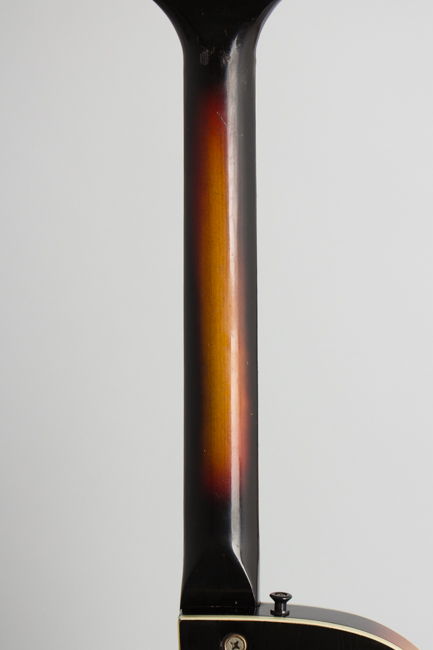 This is a nice and fairly early example of a true Harmony classic, the H-70 Meteor. Introduced in 1958, the Meteor was the first of the thinline cutaway designs that were Harmony's bread and butter electric guitars for the next decade and is a fairly classy instrument despite its humble reputation. The H-70 in sunburst finish sold at $170 in 1959, far less than most similar Gibsons but still not all that cheap by period standards.

With two great-sounding DeArmond "Golden Indox" pickups (introduced with this model), the Meteor is a very good-sounding instrument, both snarly and sweet when coaxed. The laminated maple body is 15 3/4" wide and 2" deep at the rim with a single rounded cutaway and a laminated spruce top trimmed with subtly fancy 5-ply binding. The Meteor is wired to the now-common scheme Gibson developed in the early 1950s: tone and volume knobs for each pickup and a single toggle for selection.

The slim bolt-on neck is multi-bound with pearloid block inlay and is equipped with the "Torque-Lok" trussrod, an under/over double rod adjusted at the headstock that is actually quite effective. The internal factory date code on this guitar marks it as a 1961 model, as does the vibrant sunburst with more red in it than later examples.

The Meteor has been a popular choice for vintage R&B, soul, and garage band sounds recently and also boasts a solid rock and roll pedigree. Rolling Stone Keith Richards' first "serious" guitar was a sunburst H-70, which saw extensive use on all the Stones' early records (including their landmark first album), first tours, and many TV appearances.

Lead guitarist Dave Davies cut The Kinks' epochal hit "You Really Got Me" in July 1964 with his natural-finish Meteor -- the scraping, drivingly distorted tone he achieved remains uniquely arresting even today. Davies bought the Meteor -- his first "real" guitar -- at Selmer's "on the hire purchase" before the Kinks even had a permanent name. This model was popular with many teen combos both in the UK and US in the 1960s and is still a solid performer today; one of Harmony's all-time best designs.

This is a nice and relatively clean example overall, with some typical light finish wear, dings, and dents with pickwear to the top but no serious wear or repair. There is one noticeable ding to the back of the neck just behind the nut. The pickguard is missing, the upper strap button replaced (the original was fragile plastic), and the first block position marker has been replaced with a piece of marbleized celluloid in place of the original pearloid (it probably fell out long ago). One tuner is typically slightly bent but fully functional. Apart from this, the guitar remains original; a good-playing and great-sounding Meteor including the original chipboard case. Excellent - Condition.
×